As the racing season winds down, we have the opportunity to appreciate some of the inspiring stories this year has provided, and look forward to what we can expect in 2019. This July, we reported on the amateur women’s team that rides the Tour de France, in its entirety, one day ahead of the men. Donnons des elles au vélo J-1 has gained a lot of traction over the 4 years the project has been active, and by encouraging other enthusiastic riders to join them, they have given many women (and men) the chance to prove to themselves that they have what it takes to ride the Tour de France too.

Gyl Golden is one of those riders. As a way to celebrate her 50th birthday, she rode the whole track with Donnons des elles au vélo this summer, and is now in the process of recruiting her own team to ride the 21 stages beginning in Brussels next year. Two decades ago, Golden abandoned her stable career as an architect to follow her dreams of living a life of travel and adventure. She has now completed several Ironman competitions, founded her own triathlon training company, lived all over the world, and completed the course of the Tour de France.

Golden came to cycling through her Ironman training, and although she was initially a bit apprehensive, she knew she’d found something special. Despite any pre-emptive reservations, she explained that, ‘once I got started, I couldn’t stop thinking about it; how to improve, the best gear, discovering beautiful places to ride.’ She fell hard and fast, and as Golden is quick to tell you today, cycling changed her life and allowed her to see the world in a completely different way.

So when she saw the riders of Donnons des elles au vélo while watching the Tour de France in 2017, her interest was piqued, and she immediately began considering the possibilities. She explained that watching them, knowing they were amateurs, she started thinking, ‘If they can do it, I can do it… probably.’ Nevertheless, having already put many kilometres on her bike, she understood the challenge, ‘I went from “oh that would be so awesome,” to “ohh that would hurt sooo much.”’ 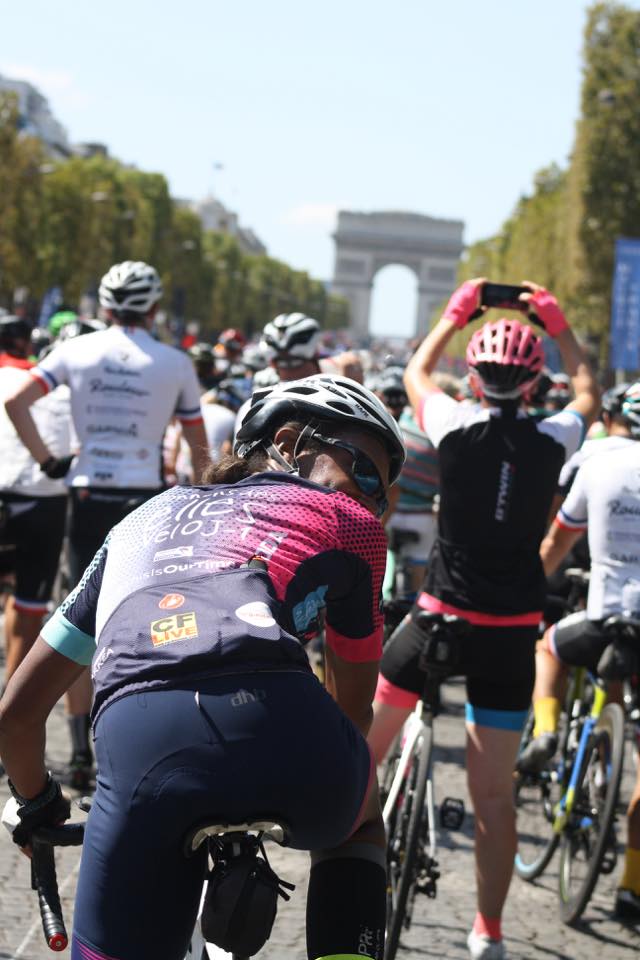 Not one to let her inhibitions get in her way, when the team announced it was accepting applications for new members, Golden decided to apply. Donnons des elles had 5 spots open and received hundreds of applications. With so many qualified women looking to join, they were forced to make a very tough decision and Golden was not one of the ones chosen. Yet in her heart, she had already committed. After finding a group of other interested riders on Facebook, she decided she would fund it herself and do it anyway.

It’s not a decision she regrets. When asked what it was like to ride the 2018 Tour de France with a bunch of inspired amateur riders, her response was clear and enthusiastic, ‘I had such a positive experience and after just 3 short weeks, I’m really not the same person.’

Golden went on to detail the highlights of the experience, praising the beauty of the Alps and Pyrenees, the satisfactions of completing those 12% pitch climbs, the kindness of strangers, and the friendships forged between spells of sufferance and elation. Adding to all those euphoric sensations, Golden believes these events are capable of inspiring something even more important. As she said, it changed her life and she wants other women to know about her experience and the opportunities available to them. Along with many other dedicated female athletes, she knows that claiming a rightful place in the world of sports is an important step towards achieving gender equality.

Golden explained that, ‘There are so many horrible and serious things happening in the world now that need attention, so the question might be, can something as seemingly frivolous as women riding the Tour de France route change anything? I say yes, let’s make this a social movement. When men begin to take women in sports more seriously, they begin to take women more seriously.’

We couldn’t agree more. Although riding the Tour de France might not be a realistic goal (yet) for all cyclists, the advice Golden gave regarding taking on a new challenge rings true regardless of what you’re looking to achieve:

‘Whenever we want to accomplish something outside of our comfort zone, it will produce anxiety and fear. Fear is normal and for an enormous goal like this, it’s inevitable. But if it’s something you really want, do it anyway; just do it scared.’

Anyone interested in joining Gyl Golden to ride the course of the 2019 Tour de France can get in touch with her at contact@goldentriathloncoaching.com. Dunne Still on the Market After World Championships