Since 1995, thousands of riders have taken part in Megavalanche, the mass downhill race from the glacier in 3,300 metres of elevation situated above the French ski resort Alpe d’Huez. Ondrej Barta (30) from the Czech Republic was among the lucky ones who made it to the finals.

Owning a degree in geology and a construction company focusing on small power plants, Ondrej Barta has been on the board of professional mountain biking since his teens. The former downhill and ski instructor took part in several hundred races including 30 MTB world cup starts and the famous Crankworx DH in Whistler, Canada.

Even though he never became a professional rider, there is no need for regret as Ondrej has some other goals – he used to teach at the university and gave lectures about structural geology at the international conference of sciences and, besides mountain biking, he loves other sports like motocross, skiing, bouldering or paragliding.

He won countless local and national races, making it onto the podium in Czech, Slovak, Polish, Austrian or Hungarian MTB cups. For eight years, he was a member of the official Czech national team. This summer, he made his ultimate dream come true: he took part in the legendary Megavalanche race. Let’s hear the story in his own words.

“I’ve experienced a lot of fun on my bike as I took part in races across Europe. My biking adventures included riding in the Himalayas, in a tropical rainforest, across the desert and many islands, in British Columbia, in mines under the ground, and on snow as well as in towns. I seek for adventurous events that might bring me joy and yet unknown experiences. 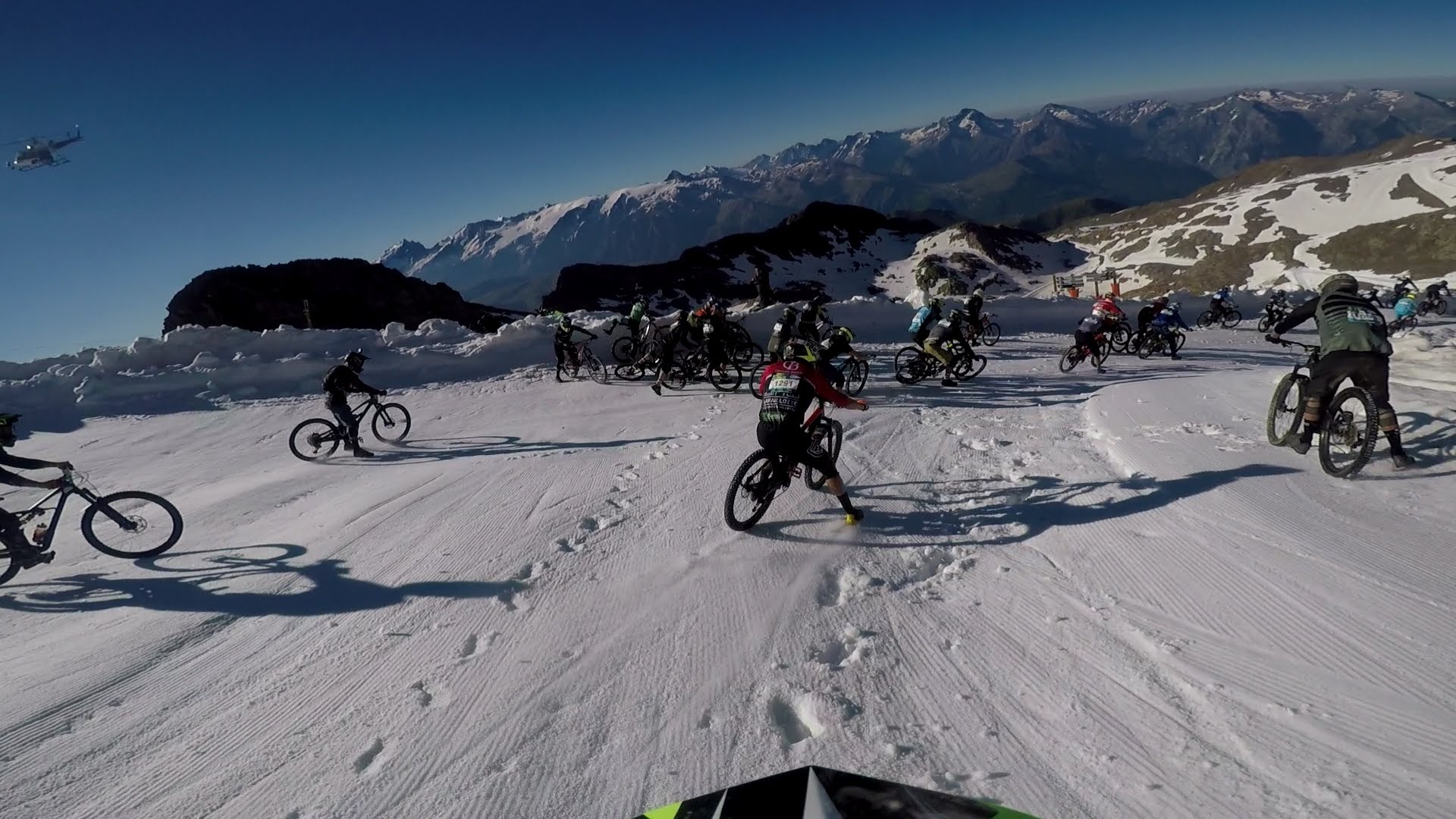 “For many years, the Megavalanche has been a challenge that I craved to take up. Just two weeks before the race, I got a call from my friend announcing that there are still several entries available and so, without any hesitations, I enrolled. With experiences of taking part in both mass start races and races on snow, I’ve had an idea of what to expect from such an event, however, I lacked the physical fitness that proved to be an issue later in the race.

“I arrived in the Alpe d’Huez almost a week before the start. This resort is amazing and, especially in winter, it’s a must place to be. Because of the high starting number, I got for my last minute registration, I knew it would be really difficult to get to the finals. Apparently, I had to make a really good result on the qualification track that proved to be even more fun than the final run leading from 3,300 to 720 metres above sea level.

“Ten heats in total, each comprising 150, riders stormed the qualifications runs that took place on a significantly shorter track. The 35 fastest riders of each heat advanced to the Sunday finals, making it 350 riders in total. Another 350 riders succeeded to the Saturday Megavalanche Challengers. The rest of the participants ended up in their respective groups of Mega Amateurs, Affinity 1 or Affinity 2.

“Because of the total track length, I’ve put on a less aggressive suspension than usually, making my Banshee bike setup little more comfortable. What I outstandingly took care of was a puncture prevention. In the end, I put on tubeless downhill tires. In the qualifications, I started from the rear line with the notion I need to work through the peloton and pass at least 115 riders in order to make it to the finals starting list. The best chance to get forward seemed to be in the first section where the wide track enabled overtaking. I did my best and ended in the 10th place.

“Start of the final heat was stunning! Because of the immense number of the participants, all riders had to gather at the bottom station at 6 AM to be on time on the starting point situated 3,300 metres above the sea. Even though the temperature dropped a lot below zero and the air was icy, adrenaline before the start made me warm enough to forget I only had a summer jersey on.

“The ceremonial anthem called Alarma la Bomba together with a helicopter circling the sky created a unique starting atmosphere resembling the feeling as if I were standing on the front line. Finally, I took a deep breath and hopped on my bike. 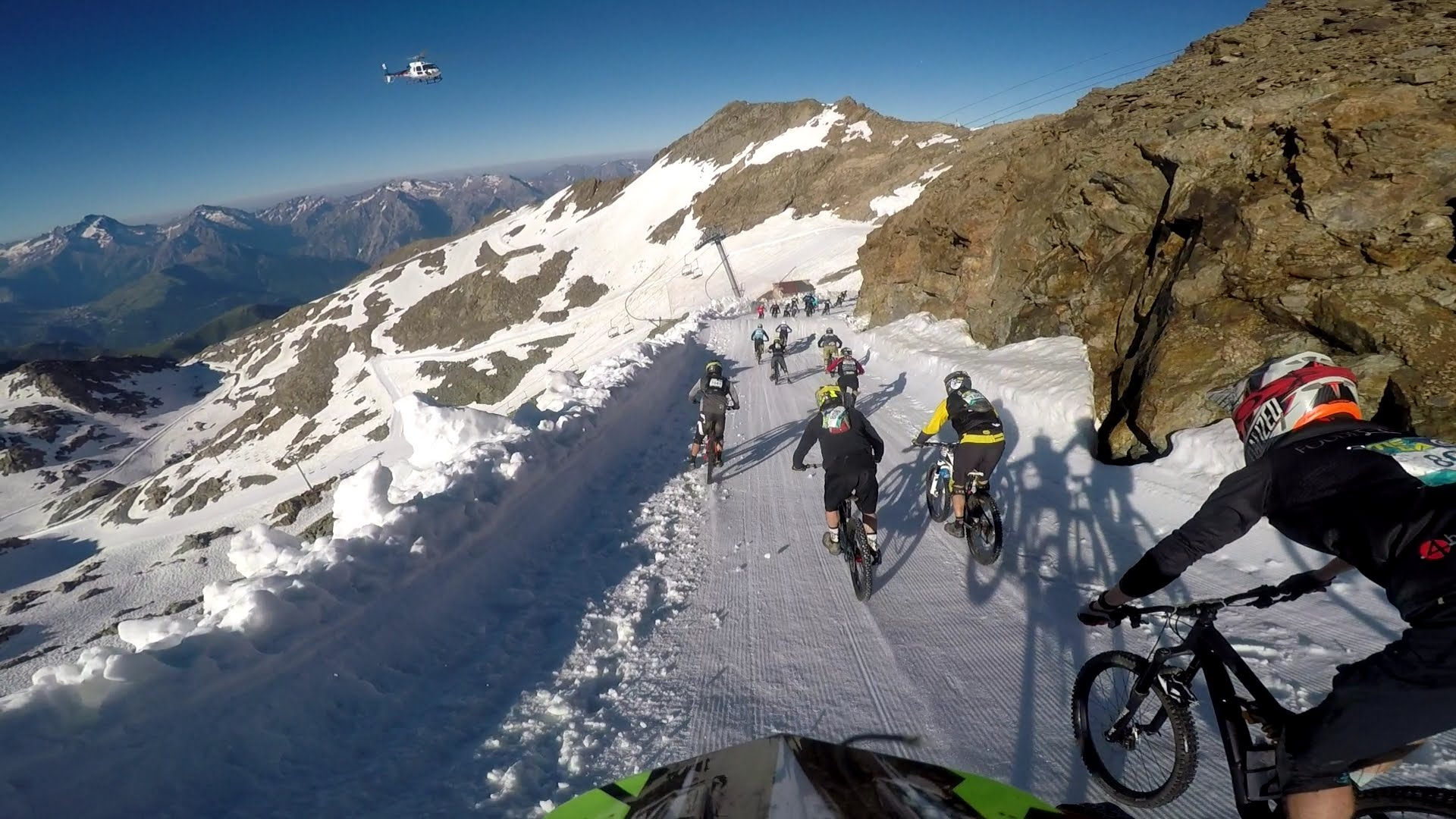 “The first three kilometres, it was a pure downhill madness on snow. In this total chaos, I managed to pass about 70 riders and made it to top 30. At that moment, I realised that I should have rather saved some energy for later. The mass start when everyone tries to get as ahead as possible is extremely demanding and the high altitude makes breathing strenuous. I guess that a good half of the riders fell off their bikes more than once.

“Although the well-kept surface of the slope made bike steering comfortable, the number of falling bikers made the ride totally unpredictable and in the end, I also crashed into a biker that ended up on the ground just in front of my front wheel. I got up and luckily didn’t lose much. The glacier section was followed by a descent on a narrow trail leading through rolling stones where overtaking was almost impossible. Next part leading around the Alpe d’Huez required a lot of pedalling, yet I started to feel numb and so I was dropped by approximately 30 riders.

“The final part was led on a downhill track that took about 10 minutes. After the overall time of 48 minutes, I made it to the finish avoiding any technical failure, ending on the 67th position of 350 riders of the final heat, or of all 1500 riders registered for the race. My average heart rate was 170 beats per minute, with the maximum of 196 bpm.

“My goal was to get into the top 100, and so I was completely happy with my result. For the next time, I should improve my physical condition as the riders in the front positions are incredibly strong and evenly matched – there have been 50 nationalities in the race with the best enduro and DH riders included.

“Megavalanche has been one of my best mountain biking experiences and I really and honestly encourage to take part in the event. Starting fee is up to 118 EUR. In exchange, you’re not only allowed to participate but you also get a week ticket for all cable around cars, making it a bargain. Next time, I will definitely come back. Full throttle from the start, downhill tires, appropriate fitness, and a great enjoyment! See you there!”

Are London’s Mini-Hollands an Infrastructure Success?