As you may know, ŠKODA has an affinity to the cycling community, which manifests itself not only in their support […]

As you may know, ŠKODA has an affinity to the cycling community, which manifests itself not only in their support of events like the Tour de France but also in the construction of their own bikes. Not long ago, the guys from the Czech automotive industry got in touch with Ondrej Carnansky, with the intention to launch something revolutionary: an entirely wooden mountain bike. This is the story behind the scenes.

Ondrej had worked in a bike shop in Mallorca for a couple of years before he decided to create his own bike that would be completely different from anything he has ridden before. Various ideas came to his mind, including a construction with a carbon fibre frame, but something like that would be far from being special. As a keen nature lover, Ondrej started developing a frame made solely of wood. 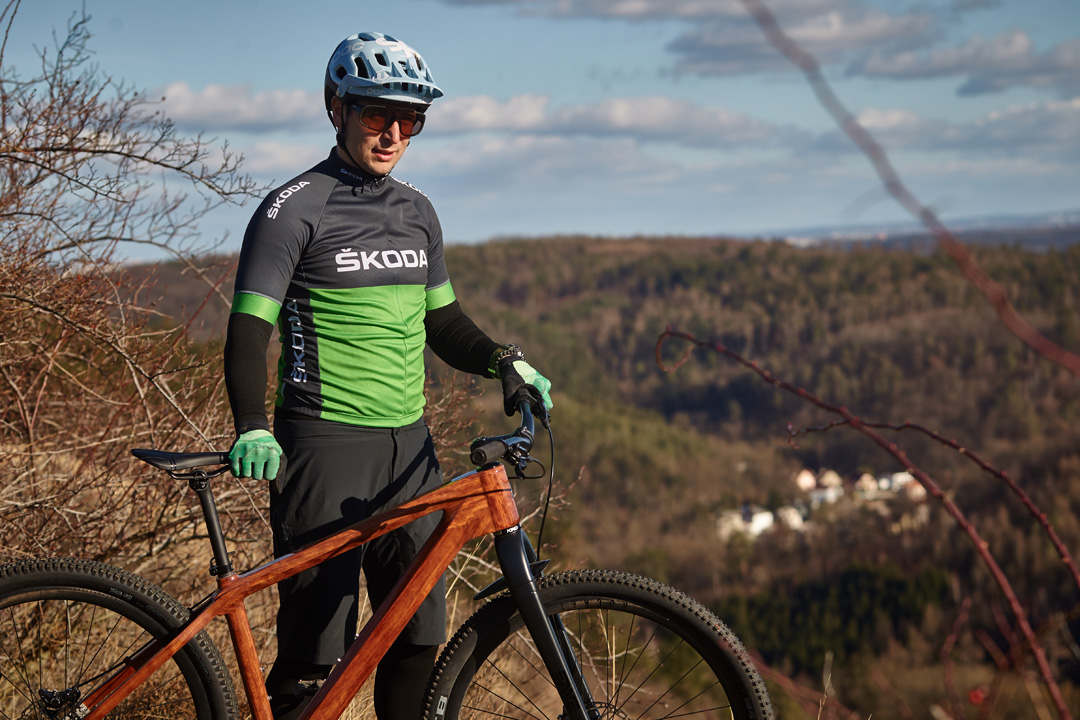 “I wanted a bike that would be both crazy and beautiful, even though the original idea was to make a bicycle that would also work as a street advertisement for the shop.” Not even a year later, Ondrej introduced the result of his efforts – a distinctively designed mountain bike named “Drevak”, which would translate as “Woody”.

The funny part of the story is that Ondrej doesn’t have a degree in either construction or technology, but is a graduate of the faculty of economics. So he had to spend about two months fiddling with the appropriate geometry and collecting all the available information about similar constructions.

Ondrej spiced up the bike-building process with DIY creation of a bunch of other things, like a baby bed or sunglasses frames. That helped him to develop his own craftsmanship and to find appropriate tools, techniques, paints, and materials.

Building a mountain bike was an easy choice as creating a road frame would be much more expensive and Ondrej didn’t have money to waste. The entire construction was made with the help of only a desk drilling machine, a miller and a Japanese saw called dozuki. 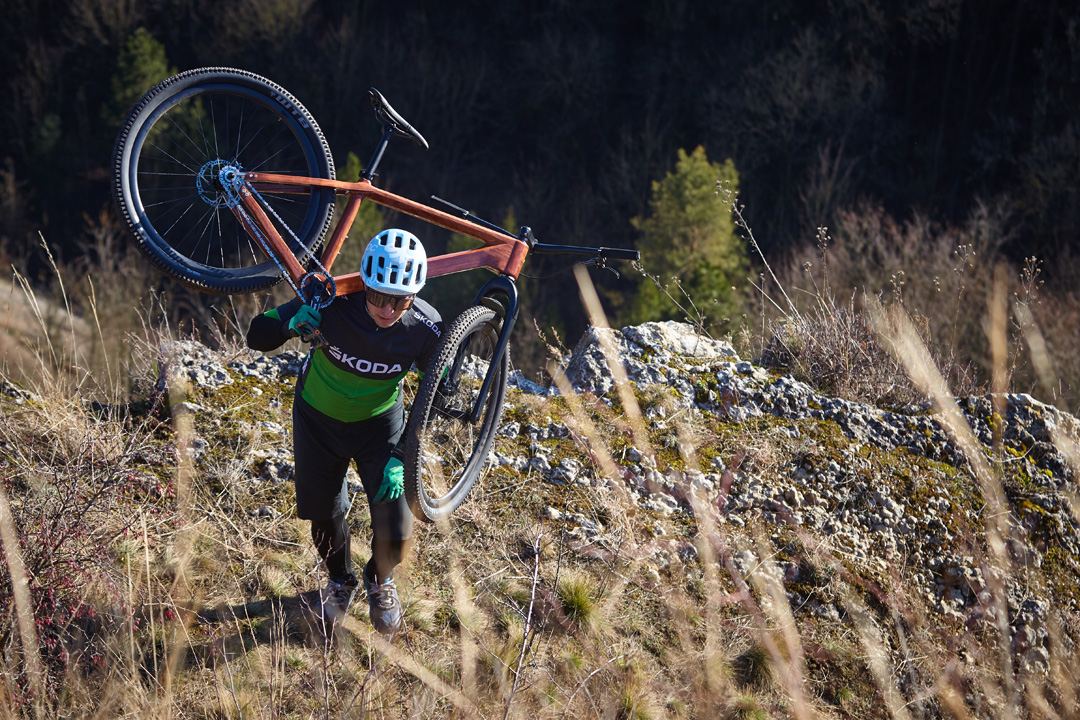 Picking the right kind of wood was one of the most important steps in the process. “The harder kinds, such as maple, walnut, oak or ash, have some great qualities. So do some more exotic woods, like bubinga that was my final pick for its beautiful colour and pattern,” Ondrej recalls. In the end, the entire work took approximately 400 hours including planning, sketching, designing and construction.

Once “Woody” was introduced to the public, people from the ŠKODA became interested and after a couple of meetings, Ondrej agreed to build a brand new piece using bigger, 29” wheels. The bike has quite a similar design and feeling to his predecessor. 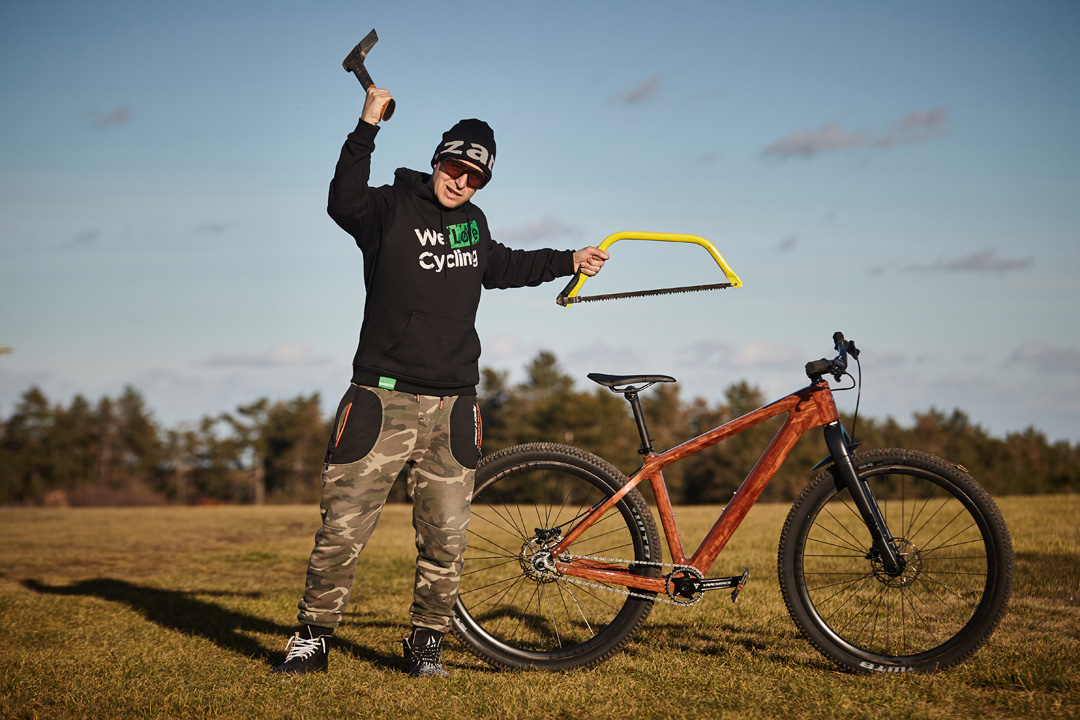 As our ambassador Richard “Gaspi” Gasperotti recalls, there were already several attempts to build such a bike with more or less success. Wood, in general, isn’t very popular among bike builders because it is unpredictable and unstable. Unlike synthetic materials such as carbon fibre, with wood, the designer can’t be entirely sure under what conditions it grew or if it dried thoroughly. “However, a bike made of wood seems to be very rare and exclusive because only a few companies dare to use this material.”

“ŠKODA started out as a bicycle company and as we are very interested in environmental sustainability, we took this project as an opportunity to showcase a bicycle that is as close to nature as possible. The wooden frame is very tricky to build but we are definitely proud of the final outcome,” Josef Matějovič, head of the We Love Cycling project, said.

And what is the ride like, you ask? “Although there are slight differences, it is surprisingly similar to what you can experience on a conventional bike,” Richard says. He doesn’t recommend bringing it too close to a campfire, though.

3 Breathing Techniques You Should Learn for Cycling

Ghana’s Cycling Team Outraged After Being Called ‘Skint’ by Australians