It’s pretty much a no-brainer that every high-end pro cycling team needs a small army of trainers, nutritionists, cooks, advisors, and, of course, mechanics. Together, they all create a balanced support team but one could say that the work of the last group ensures a big portion of the potential success. To put it easily, mechanics are the real deal.

And Jakub Duřt from Prague, Czech Republic, knows it all too well. The career path of this young mechanic has been more than impressive so far, only partially because of luck. Thanks to his skill, working morale, and enthusiasm, he’s been noticed by the management of Bora-Hansgrohe in 2017 and has been their on-board team member since. But how did he come that far, being only 19?

He was introduced to values of manual work and passion for cycling at an early age because his father was a carpenter and his uncle owned a renowned MTB team. “I liked to poke around bikes since I was a little kid,” Jakub reminisces. Although he started out as a racer for a pro Prague cycling team, Dukla, an injury at 16 changed the course of his life. He wanted to stay close to bikes so he started servicing and fixing up his colleagues’ rides and stuck with it. Thanks to already being a part of a professional team, Duřt didn’t have to go through the wringer of fixing bikes in a bike shop to prove his skills and hopped straight onto the pro team’s train with Dukla. That was, until he got noticed by German Team Stuttgart at 17 years of age where he signed a professional contract a became a bike mechanic for living.

During his time with Stuttgart, Jakub, among others, took care of Stefan Schumacher’s bike – one of the top riders at that time, with multiple Le Tour stage wins under his belt. He stayed with them for two years before returning to Czech Republic where he didn’t stay long, because Bora-Hansgrohe, the current stable of the enfant terrible of cycling Peter Sagan, had their eyes on him. 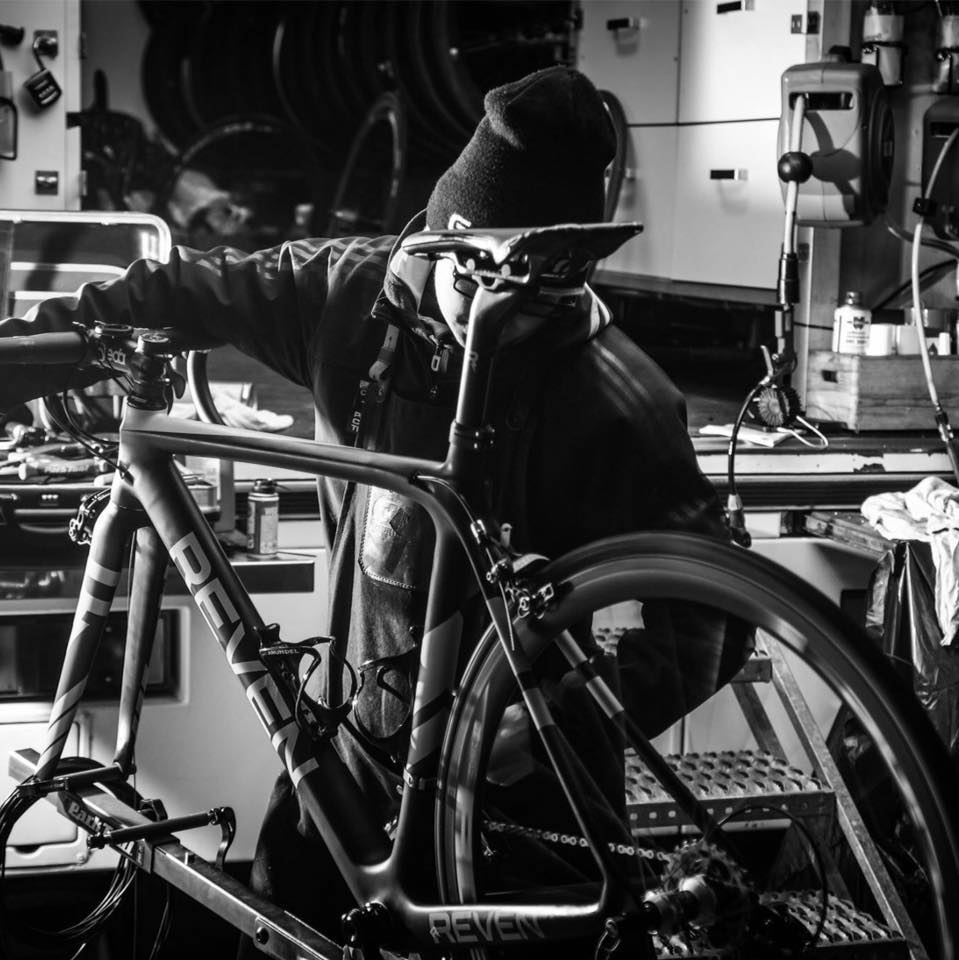 Jakub takes care of the entirety of the team’s equipment, which means weeks of rigorous routine throughout year, be it on- or off-season. Last year’s La Vuelta saw him take care of 120 spoked wheels and 47 bike frames. “We need to have all components and accessories for each bike in various colours, in case any racer wins a particular jersey,” explains Jakub the amount of processes behind the scenes. “I think that the spectators have this idea, that if the rider’s new jersey matches his helmet, basket, frame, and covers, that the bike magically appeared at the race overnight but it has been all prepared long before.”

For Jakub, time-trials are the worst. The swarm of mechanics has to get the bikes perfect and ready after each stage by the next morning and also make the whole team fleet look presentable, which requires a steady hand and quick eye. This all-day routine can take up to three weeks. Although he spends most of his time in a great assembly hall and travelled with the team only to minor races, he has his eyes set on something bigger. In the future, he would love to accompany the pros to such events like Paris-Roubaix, Giro d‘Italia, La Vuelta, and, of course, the desirable Tour de France. With his patience, skill, and progress so far, we dare to say that he’ll be there in no time.