While watching the Tour de France, have you ever wondered how does it feel to tackle those killer climbs such as Le Tourmalet or Mont Ventoux? The absolute exhaustion and limits of the human spirit and stamina the riders must endure are awe-inspiring and our calves burn just by looking at them. But what if we told you there’s something much, much worse? And that there are individuals who get excited at the thought of it? Let’s have a look at the ŠKODA’s ‘Catching Breath / Cycling up the Himalayas’ project.

Khardung La is a mountain pass in the Ladakh region of the Indian state of Jammu and Kashmir and it’s one of the highest motorable roads in the world at an elevation of 5,359 m (17,582 feet) above the sea level. Its start lies roughly 1,000 m higher than Le Tour’s highest point. Who in their right mind would think about riding a bike there? We’ll tell you who – a bunch of four lunatics. An Austrian cyclist named Christoph Kluge made a three-hour record climbing the Khardung La in 2012 and our four riders are hell-bent on breaking it. You probably want to know more about these people happy to willingly subject themselves to what might be others’ idea of hell. Let’s meet our Catching Breath contenders. 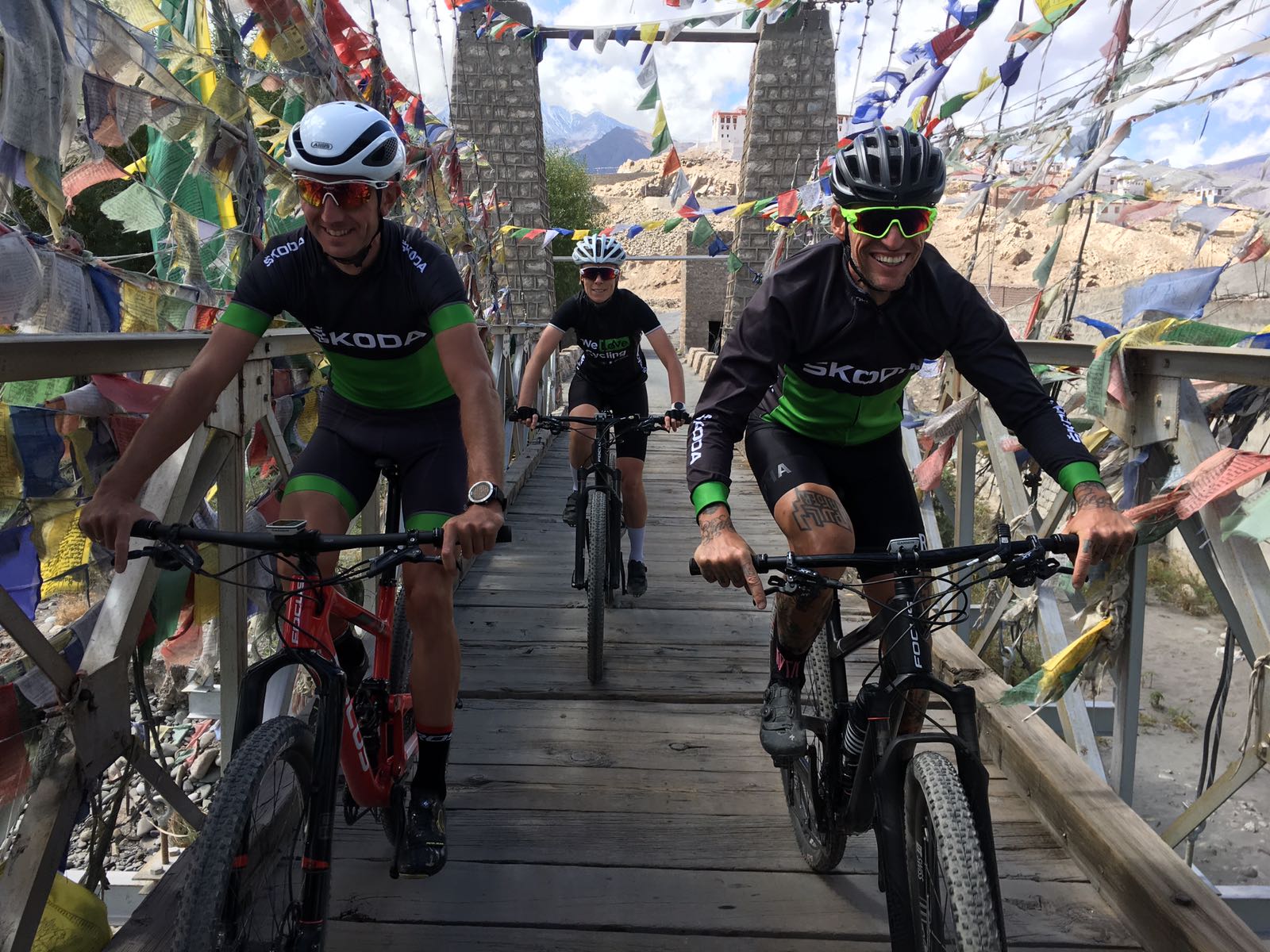 Bartosz Huzarski is a cycling enthusiast from Poland but that might be an understatement. With over 12,000 km cycled (which is a number only recorded since he started using Strava this year) he ranks among the most restless rides you can meet. It comes as no surprise that he used to be a pro cyclist under the Bora-Argon 18 team and he now leads the Huzar Bike Academy he founded. Bartosz is a three-time Tour de France participant and a few races in Tibet prepared him for dealing with altitude cycling, especially the atmospheric changes. He has a well-planed schedule for the 14 days preceding the Catching Breath challenge, which includes a diet, training, and resting plan.

Andrea Schilirò is a Milan-based freelance photographer, cyclist and a tattoo lover. He focuses on sports-related photography and bikepacking and camping in nature are one of his greatest hobbies. Although he has many long-distance bike trips under his belt and is a fan of road cycling adventures, he confessed that he had never tried such a demanding climb before but is enthusiastic about finding out how he will fare. The testament to his globetrotting penchant is the fact that he was on a month-long camping trip to Alaska at the time of writing of this article.

Next we have our iron lady – Eva Lindskog. She is a self-professed endurance specialist originally from Sweden but currently based in Switzerland. When asked about the most physically demanding thing she’s ever done she immediately mentions running a 100-mile ultramarathon and makes it sound like a no biggie. Although she thinks the limits of her cycling endurance has not yet been tested, Eva took part in bike rides of up to 300 km and even climbed Mount Ventoux. But again, no biggie, alongside her Total Elevation Gain of over 60,000 m on Strava. Speaking of which, she is currently approaching her big Strava milestone – 1800 individual QOM entries since she started cycling. And yes, QOM stands for Queen of the Mountain.

The last but not least madman is Valenti Sanjuan, currently living in Barcelona, Spain. His Strava profile description quotes “Ironman, Superman, and Batman. Just joking, ma’am.” It might seem like a slightly boasting ice-breaker until you look at his scores and ask about the greatest physical challenges he faced to this day. He casually mentions 55 hours of nonstop, sleep-less mountain biking from Madrid to Lisbon (770 km), 5 Ironman races in 5 consecutive days, which sounds insane on its own but to top it all, he did those just ONE day after finishing Titan Desert, a race which consists of 600 gruelling kilometres through the Sahara desert. It’s hard enough not to get slack-jawed after this but the last mention of Leyenda Del Dorado in Colombia, 7-day MTB event in Colombia with 16,000 m of climbing, finished the job for us.

It’s crystal clear that all our incredible riders would do anything in their power to not only see the Khardung La’s peak but also to beat Christoph Kluge’s standing record. WeLoveCycling.com is proud to offer them this possibility alongside an all-inclusive support by ŠKODA in the course of the whole adventure.

Next up in Catching Breath series

Recovery – How to Eat Right