In my last blog I wrote about my ‘speed-course: tourist’. In the recent weeks I’ve been able to enjoy the normal daily life in Mexico and with the Mexicans. After a day in Mexico city in which I visited ‘Saptel‘, a helpline for people in psychological need, and strolled around the city with an old study friend from the music academy, I left for Valle de Bravo with Manuel and two other friends. There was a triathlon being held in a beautiful setting. We stayed at a ranch with Manuel’s team and coach. Eating together, the coach’s pep talk, picking up numbers and shirts. The next day it was the day of the race and we left before sunrise to the location. 2000 participants. Logistically is wasn’t very well organized but the atmosphere was great. Being in the most obese country in the world it was a delight to be surrounded by sports enthusiasts and beautiful bikes and their trained riders. The participants were diverse, some still had a long way to go to triathlon off all the taco’s and Coca Cola, others were in perfect shape.

Manuel came in first in his class. The other members of his team also won several prices. The night after the race we drove back to Mexico city, exhausted but happy. 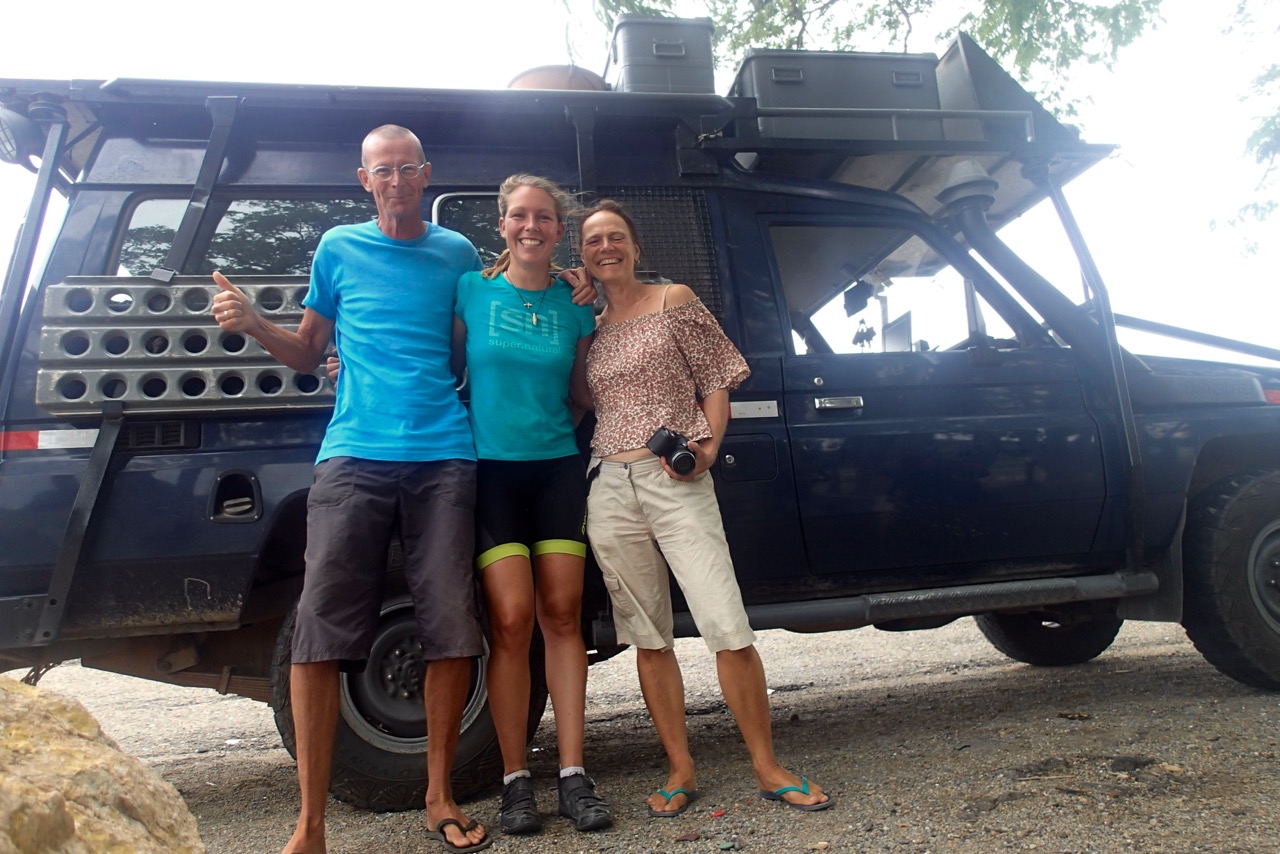 As I wrote before, Mexico is the most obese country in the world. Indeed, even fatter than the United States! Everywhere in the villages I see 3 liter bottles of Coca Cola advertised for only 20 pesos, that’s about $ 1,-. It flows like water here and as a lubricant for the greasy taco’s, quesadillas and sweet bread (as they call pastries).

It’s probably ‘cursing in the church’ (as we say in Holland) but most of the food I’ve had here cannot live up to the expectations the great Mexican food I’ve had abroad has created. It’s hard to find vegetables in the restaurants or street food while there is a overkill of meat and dough, often dripping with grease. But slowly I learn which alternatives I can look for. Those alternatives in combination with my own creations make me a feel a lot healthier and happier. 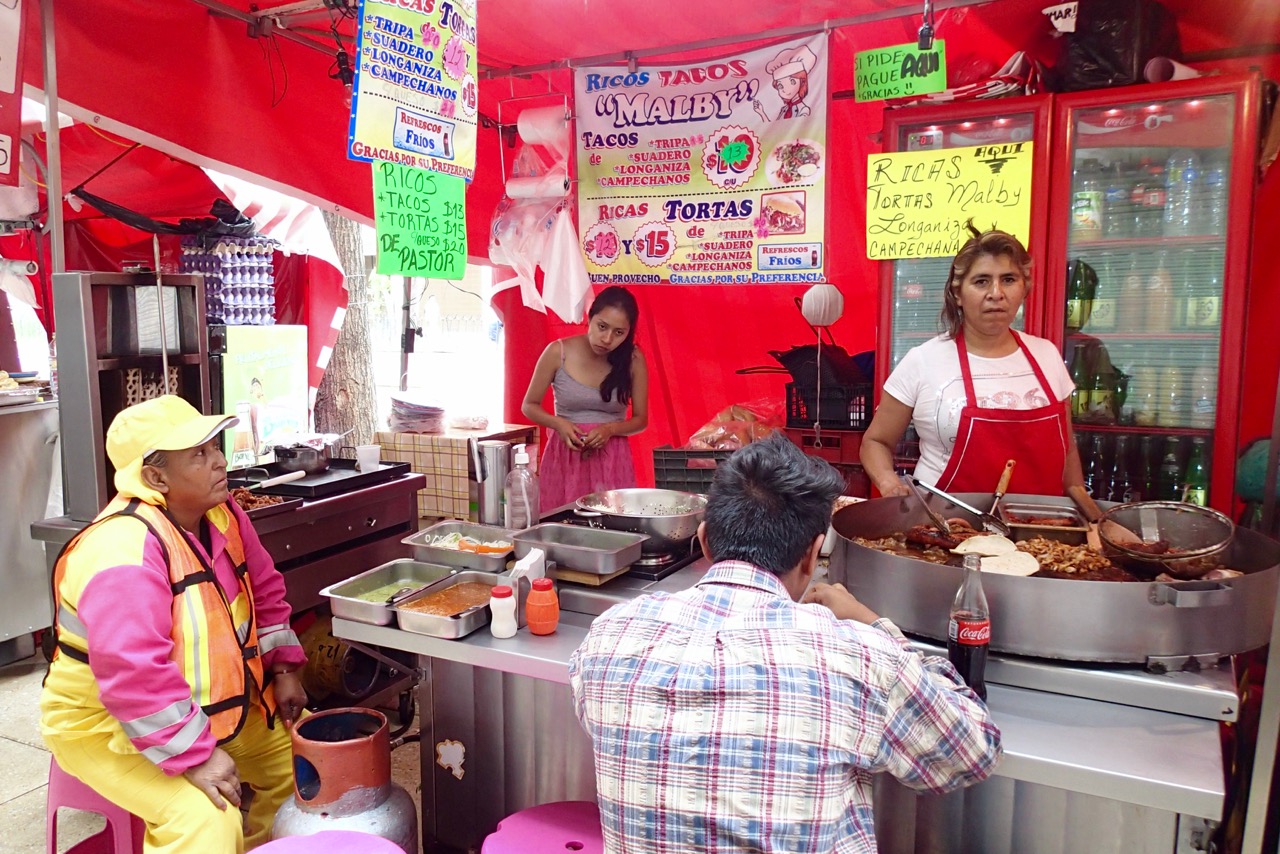 A few other NUMBER 1’s of Mexico are: the biggest pyramid (well, the biggest base, not the highest), the most crossed border crossing (Tijuana) and the biggest tree (as in fat, not high) in the world. I’d like to add to that the un-official number 1 of the dirtiest free public toilets. The country also scores pretty high for both sound and environmental pollution.

After several great days in Mexico City with Manuel en Theresa I continued my way south and found quieter roads. Now, after nearly three months, I’ve found the Mexico which I was looking forward to in the United States. It’s sweltering hot and the mountains break me, but I rediscovered why I’m travelling by bicycle. The roads here in the south are more quiet, the nature is stretched out and remote, the people are (just like the climate) warmer, the villages have more character. Once again I feel what it’s like to really be travelling for the travelling instead of being ‘on my way to..’. 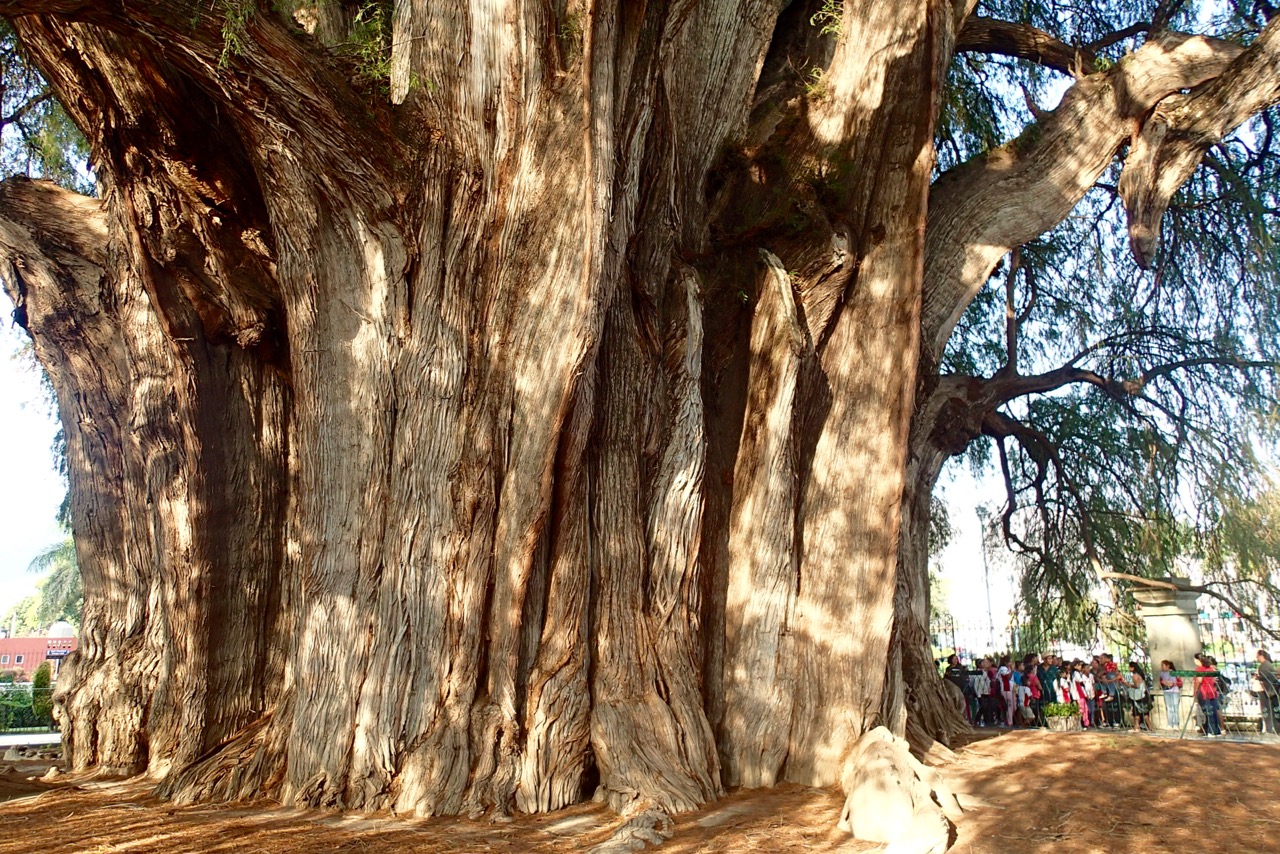 From the beautiful town of Puebla I biked into the mountains again, towards Oaxaca. I won’t lie about it, the mountains were challenging, very challenging. With some help here and there from friendly drivers I made my way over endless long climbs in the heat. But, the tourism had disappeared! South of Mexico City the people are poorer. But the atmosphere got better. I visited one more touristic attraction, for which I had to make a big, but beautiful, detour. Hierve el Agua. Over thousands of years a ‘petrified waterfall’ was created here by water so full of calcium and other minerals that it, just like stalagmites in a cave, formed a ‘petrified waterfall’. There’s still water coming from springs filling two pools in which you can swim with a view over the mountains and the waterfall. In the afternoon the place was overrun by tourists but in the evening and early morning I had the place for myself, while camping on a plateau overlooking the site.

In the days that followed I crossed some more mountains. In an attempt to see a bit more of this rural area I took an alternative route leading through small villages. But when the road turned into a sandy trail I realized I missed a turn somewhere, several kilometers ago. Following the directions of a local I decided to give the trail a go, but soon it split, and split again and again. Many forks and dead ends later I gave up and turned around, back to the village and missed turn. A bit disappointed, but in the meantime I got to cycle some of the nicest roads since a month.

Wildcamping has been difficult so far in Mexico, after Baja. There are many villages, farmland and the nature that was left often wasn’t very suitable. Now I’ve arrived in an area where it’s more easy, but the heat makes that  not much fun. After a full day slogging on the bicycle I’m sticky with sweat, sunscreen and fumes and I want to get clean, and sadly there are very few rivers around. So I’ve started asking the firefighters and police in the villages for a place to pitch my tent, but not before I’ve asked them if there is a possibility to take a shower. A shower usually means a ‘bucket shower’ here in the south, but turning over buckets of cold water above my head is exactly what I long for after a day of cycling in the heat.

Camping in that way, on villages squares and next to police offices is great because you get to live with the local community. But the down part is the noise. Mexico is loud, incredibly loud. And the strange thing is that many of the Mexicans that I’ve talked to about that agree and are as disturbed by it as I am. Then why is it still so loud? There’s music playing everywhere, day and night they light fireworks for unexplainable reasons, people yell, TV’s are jangling, dogs are barking and kids find fun in trying to be louder then all that.

A few days ago I found a place with the police, next to the village square under a shelter. At 19:00 a dance rehearsal started at the square with about 40 kids. At 20:00 a group of men began building steel stage construction while the kids were taking turns running into the door of the shelter trying to make as loud a ‘bang’ as possible, while across the street a restaurant turned up the volume of their outside stereo. I fled to a bench outside the shelter, but when an old man very pushy tried to make conversation with me there I was done. It was 21:00 and bedtime for me, while the volume here was just going up up up.

I had the shortest breath and biked to the only and overpriced hotel in the village. Once I arrived the neighbours just started a karaoke party. Luckily it ‘only’ lasted till midnight. The next morning I was woken up at 5:00 by a drumband marching the streets. Good morning Mexico! Five restless hours of sleep and a heavy day of biking ahead of me. HELP!

The next day I arrived at the house of a WarmShowers host where I had a room for myself and where I (against my nature) crashed on the bed and fell asleep after lunch. I visited the highschool where he works as an English teacher and two classes got to fire questions at me in English. Some students were curious and enthusiast, some weren’t. So far not very different from anywhere else in the world I guess. But I was amazed by the enormous freedom the students had. Hanging in their chairs with they backpacks on the table, eating lollypops, being late, chatting. That’s very different from my highschool experience. Compared to this in Dutch high schools we get treated like we’re in the army. 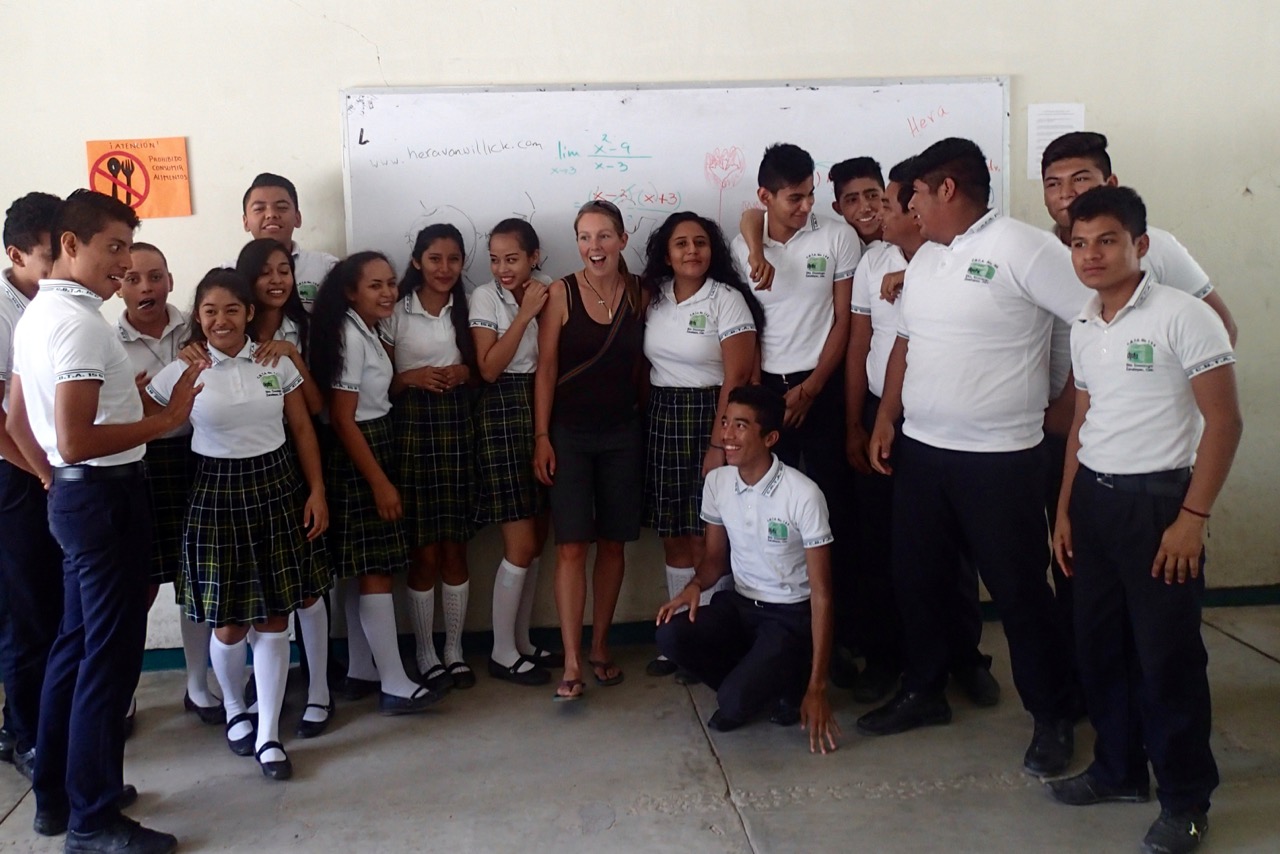 All in all I’m enthralled by what I see and hear here. It’s interesting how Mexico on one side is not that different from the west while on the other hand it has totally different convictions and manners. Every day there are new things that surprise me and for which the reasons are unclear to me. The what, how and mainly the why of this country might just be the most interesting aspect of it and the most important reason for me to spend some time here.

Today the sun was wonderfully hiding behind the clouds while I was pedaling through green and listening to a Dutch news-podcast I saw a different looking blue truck coming my way… with yellow numberplate! As it passed me I noticed the little NL in a blue corner of the plate and I breaked. The truck slowed down and turned around and Gerrit and Els got out. A Dutch couple that has been on the road for over three years. 5 minutes later we were drinking coffee and eating cake together and talking about our travels, Mexico, ruins-, churches- and meetingthelocals-saturation and our routs. Wonderful to talk and laugh in my mother tongue again for a bit with two adventurous and level headed compatriots!

With about one and a half week to go in Mexico I’m starting to look forward to Guatemala and Belize. The next two countries on the list. After enormous Mexico these countries seem tiny, I can cross them by bike in a few days.

But, first some more time to enjoy the Mexico that I found, here in the warm south.