The crowd of over 23,000 was hoping for a Czech victory, and initially the chances looked good, with Schurter, Kulhavy, and another Czech rider, Ondrej Cink, getting a gap on the start loop. Absalon was chasing, but wouldn’t join the leaders until the third lap, halfway into the race. A lap later, Schurter attacked, quickly gaining 20 seconds. Cink was dropped from the chase by Absalon and Kulhavy and then on the final lap, much to the delight of the Czech crowd, Kulhavy dropped Absalon to finish 17 seconds after Schurter, with Absalon coming in a further 13 seconds back. 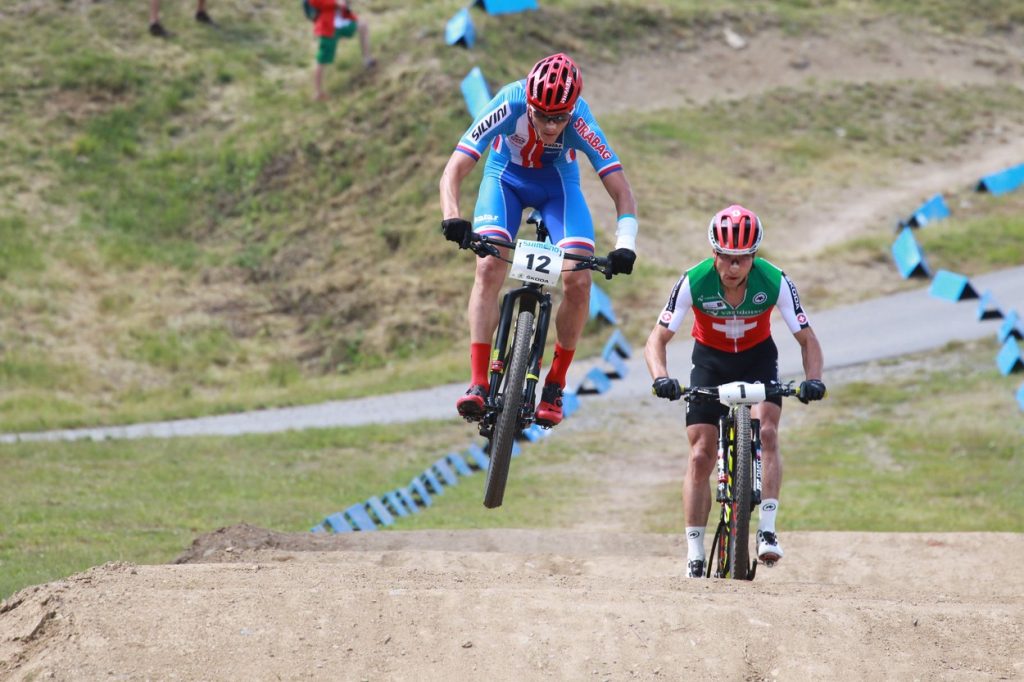 “I’m super happy about this race, this was a nice win,” Schurter said. “It was a nearly perfect race for me. Jaroslav went fast out from the start and I was able to go with him and draft quite nicely behind him. When Absalon joined us I thought ´well, now it’s better to attack´ and see if the others could respond. It is amazing, the crowd goes wild when Jaroslav comes by. That’s really great atmosphere here. It is always nice to battle with Absalon, and the best feeling is to beat those two. I am really happy about this win.”

Jaroslav Kulhavy was also happy, although he wanted to reach the golden medal too. „In Nove Mesto, the cheering of the crowd was the biggest I’ve ever had in my life. The second place is fine for me as I couldn’t find my own rhythm and pace during the race. I believe I’ll be in a good shape for the Olympics in Rio now,” Kulhavy said.

In the Under-23 women’s race a group of four riders formed at the front of the race on the start lap, with Evie Richards of Great Britain joining Rissveds, Frei, and Keller. Rissveds delayed her attack until the second lap of the 19-kilometer race, mindful of how Frei had countered her attack at the European Championships to win that title.

On the second lap Rissveds dropped the other riders to solo in for the title. Keller held the silver medal position until the final lap, when Frei surged by her team mate to finish 1:04 behind Rissveds. Keller finished a further 18 seconds back.

“The course here is like in Sweden, with the rocks and the roots, so I like it very much and I think it is good for me,” commented Rissveds. “Sina surprised me in the Europeans, when she was so strong and I could not go with her. So, this time I was more cautious and rode with the others for a while to study and see where I was strong and they were strong, before I made my attack.”

The Youngsters Will Fight Hard Too! – 2016 MTB World Championships

FOR BIKES in Prague

How to Introduce Your Kid to MTB? Follow These 7 Steps!