Feel Like Exploring the World? Start a New Adventure with a Camper Bike

There are so many beautiful roads around the world. From biking through wonderful mountain landscapes, through leisure cycling around magical […]

There are so many beautiful roads around the world. From biking through wonderful mountain landscapes, through leisure cycling around magical lakes, to strolling past historical cities, you kind of want to see it all. The only thing you need to get carelessly around is a bicycle camper. Bicycle what? You’ve read this correctly. There are more and more people who are getting insane about this peculiar way of cycling. For someone it’s more of an artistic inspiration, the others perceive this transport possibility quite seriously, though.

Made for Burning Man Festival 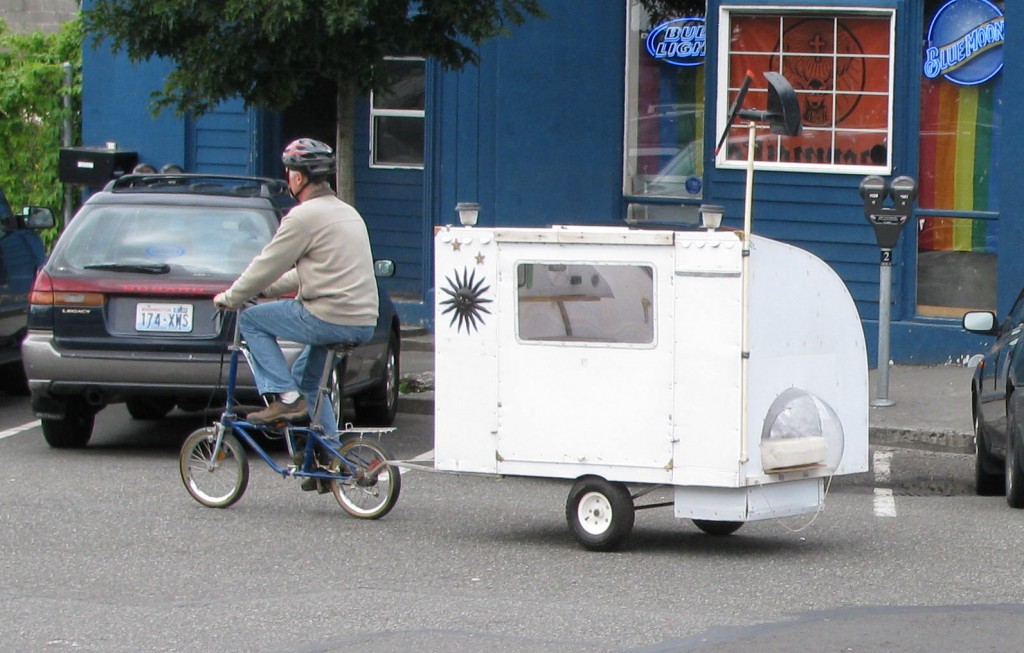 Bike campers allow travellers to venture anywhere they physically can, while having a miniature camper trailing behind. The growing popularity comes from the simplicity behind the design and low maintenance cost. American DIY designer Paul W. Elkins, known for his numerous innovative vehicles, created his own personal bike camper to take to the week-long Burning Man festival in Black Rock Desert, Nevada. The idea came from the theme for that year, which was ‘Hopes and Fears of the Future’. Paul’s thoughts at the time were fixated on the news warning of a potential bird flu epidemic. This was an attempt to show how one might live in a nomadic post-apocalyptic life situation. 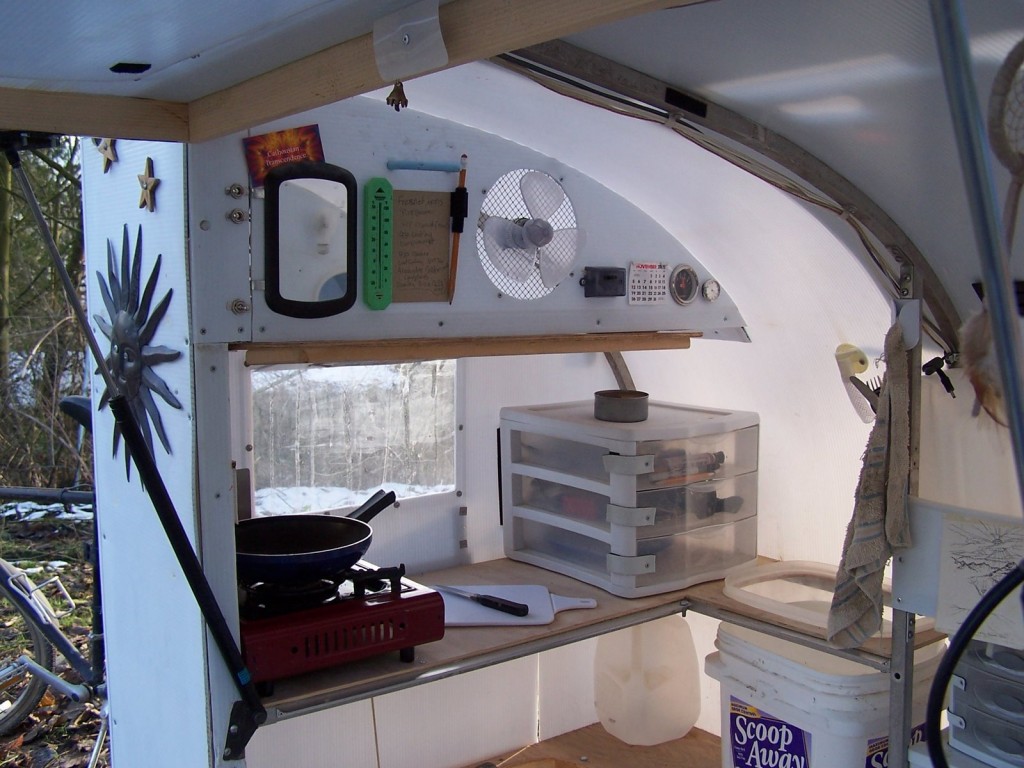 Elkins’ bike camper comes equipped with a compact kitchen, a table, a ventilation system, and a folding bed complete with a small bubble window that allows some extra headroom and the opportunity to fall asleep with a view of stars on the sky. 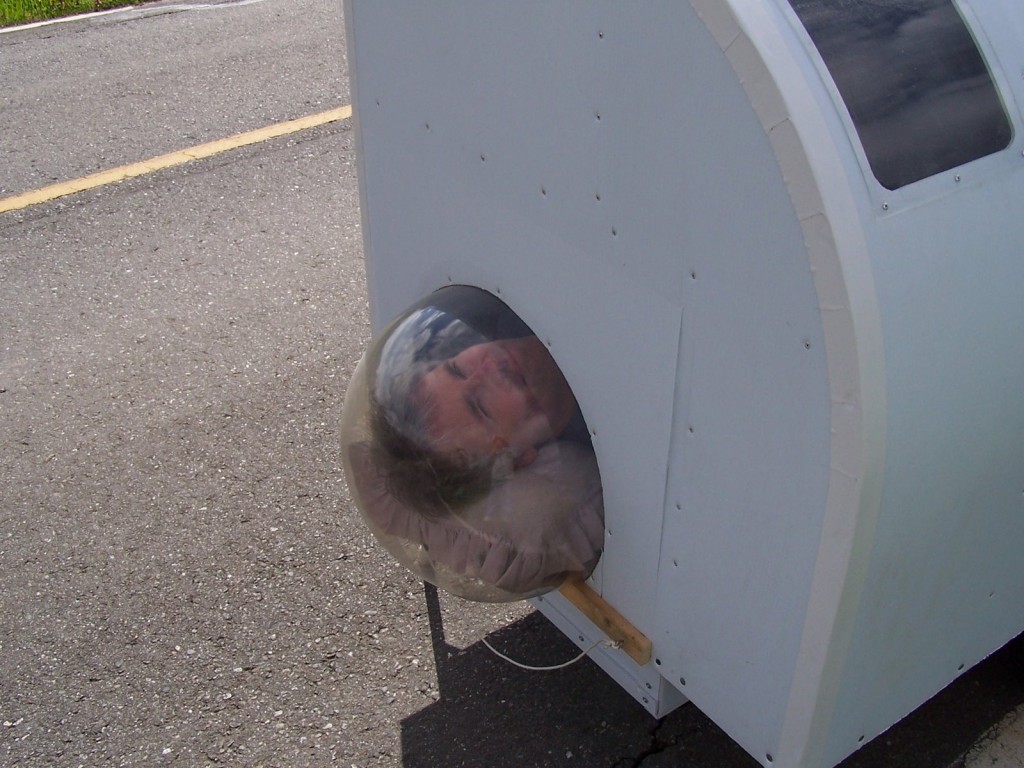 The bike camper relies solely on reusable resources with a solar power oven, solar water-heating system, a wind turbine, and solar-powered lights. The camper itself can withstand most weather conditions, including rain and winds. 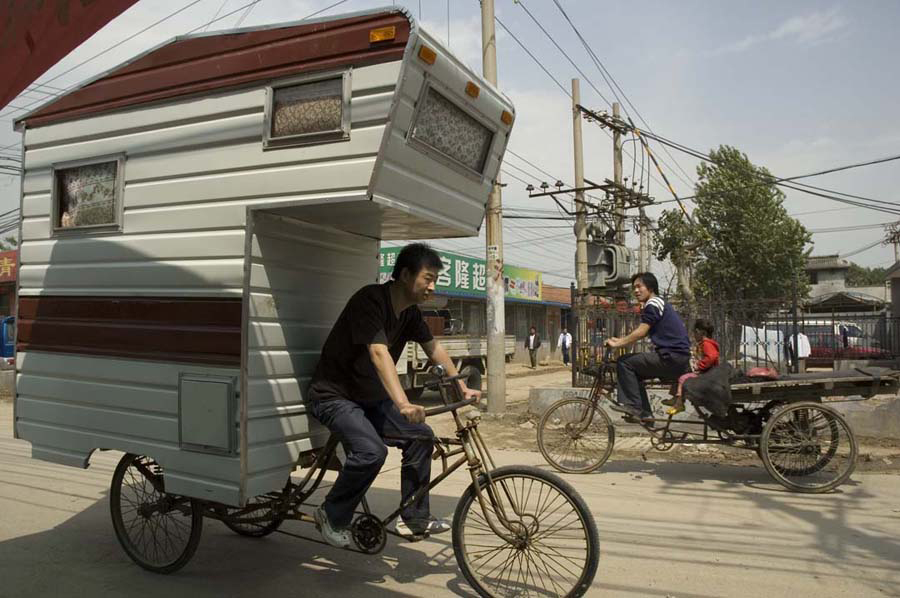 More open-minded approach arrived with the US artist Kevin Cyr. Kevin from San Francisco has always been interested in vehicles of all kinds, including recreational vehicles. Among other projects, he came up with an idea to build a full-sized camper bike. The functioning sculptural piece, built in 2011, was made from scrap metal, painted and inspired by his recent series of paintings and drawings.

It’s very similar to common car campers, down to the smallest details like faux wood siding, reflectors, and power inlets. For Cyr the camper is more of a sculptural art piece than functional recreational item, but he has definitely proven its viability by cruising it all over various cities. 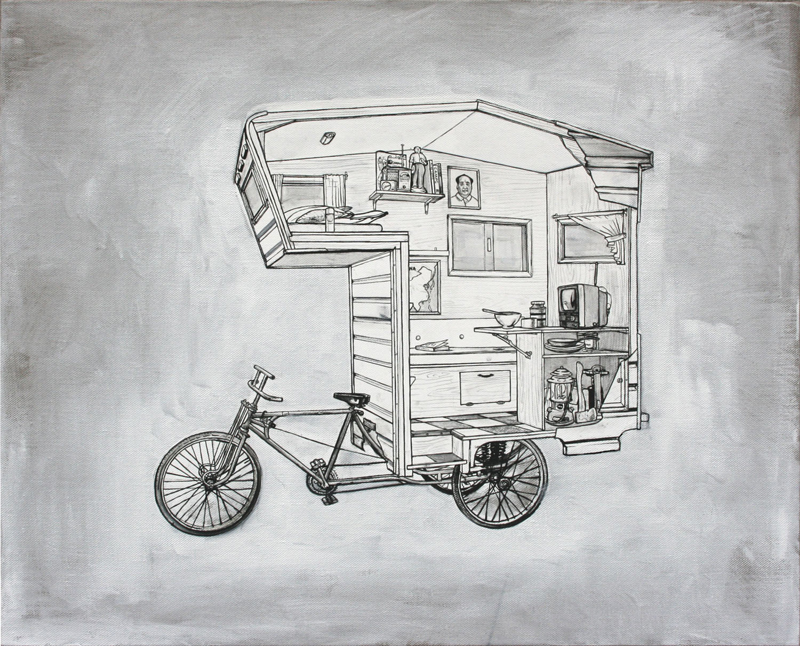 If you look inside you can find similar compartments and parts familiar in every camper. There is a bed under the ceiling, a bookshelf occupied by different artefacts, there’s a picture hanging on the wall or a kitchen corner with its own TV set. No wonder that Kevin’s artistic view came together with numerous visualizations, showing potential utilization in a common life.

You may laugh at such ideas, but there are even well-established companies, considering camper bike as a possible sales product, however. One of them is German-based company Dethleffs, which camper adaptations can be seen on the highways across Europe every summer. 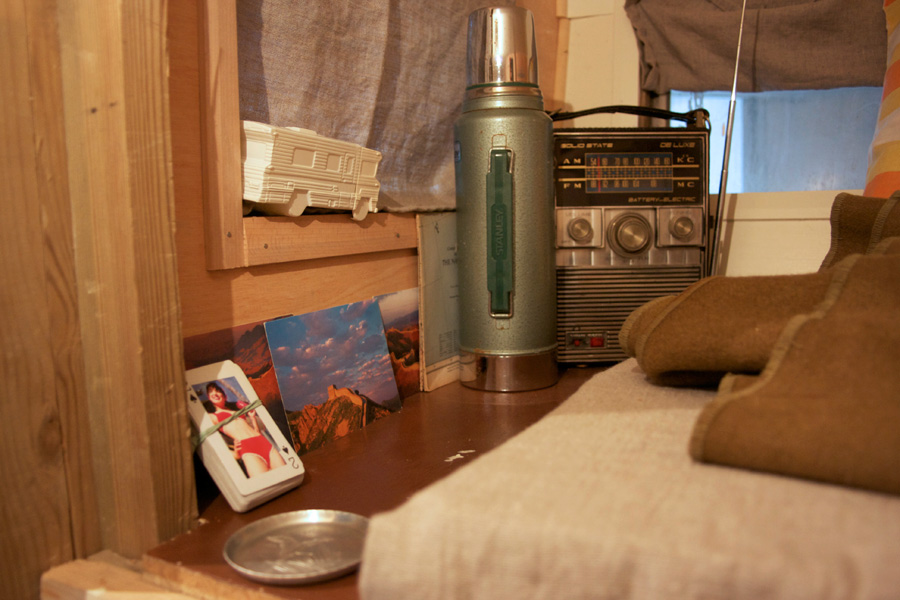 Do you have your own camper bike? Or do you know about someone using it? Let us know in the comments.