Buddhists say that those who want to achieve happiness should live in the here and now. We decided to honour this teaching and went with bikers Michal Maroši and Jakub Vencl to Sölden, Austria, which is a paradise for every biker.

In the panoramic window of the ŠKODA KODIAQ, you can see how the fast wind drives the clouds over the ridges. A fleeting shower of rain is replaced by the sun, which the Ötztal glacier reflects like a giant natural mirror. The hotel for the night was the aerodynamic Caretta trailer, brought by the ŠKODA KODIAQ alongside the Czech bikers. The small beach at the glacial lake Tiefenbach at 2,900 metres above sea level then provided the ideal place to spend the night. In the morning, all you have to do is take the bikes out of the boot, assemble them and start riding.

Michal Maroši and Jakub Vencl are looking forward to three days in one of the fastest-growing biking locations. Bike Republic Sölden is a unique space for bikers, no matter who they are or where they come from. Anyone who visits the park founded in 2015 can become a citizen. With an emphasis on ecology and sustainable development, the republic have created a network of trails here that make Sölden one of the best bike parks in Europe.

If there’s one thing that can be said for the local trails, it’s that they’re really long. For example, the Fernar Nonstop Long Trail, which starts at Lake Tiefenbaz, offers a ride that sends you down 1,400 altitude metres. While elsewhere you’ll be hitting a few favourite trails over and over during the day, in Sölden, the trails are so long that sometimes you can only do three in a day, so there’s no danger of getting bored of them. 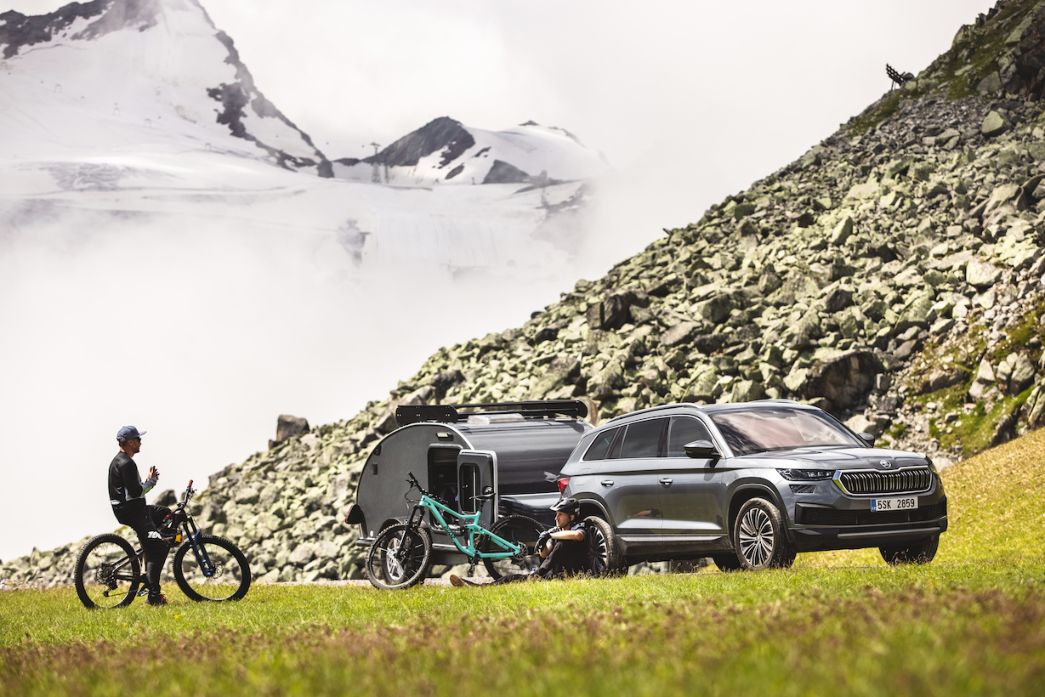 In its current facelifted form, the ŠKODA KODIAQ looks even more robust than in its original 2016 design. When driving in the dark, the automatic headlight-shading feature is a nice touch, as it doesn’t glare on oncoming vehicles, and it also detects other objects with reflective elements, such as cyclists. The upholstery is also interesting, made from vegan and recycled materials. The steering wheel has grip detection and will sound an alert if the driver is not holding on as they should. Michal and Kuba enjoy thrash metal from the speakers, the number of which has been increased from eight to ten in the interior, plus one in the dashboard and a subwoofer by the spare.

The ŠKODA KODIAQ is just the car you need for a longer adventure out of town. It has plenty of power to get you safely through all the pitfalls of the restless motorways and carry you and your heavy load through the Alpine switchbacks to your destination. At every moment, it provides as much comfort as a modern car can offer today. The doors open without fumbling for the keys in your pocket, and you can even swing your foot under the rear bumper to open the fifth door.

In the dark, the interior is accentuated by lights that can be quickly and easily adjusted to suit the mood of the moment. The seats and the entire cabin environment are not far from a luxurious massage room where you want to close the door behind you and relax after a long day at work or even on the bike. There’s room for everyone and everything inside, even a crew with two full-suspension wheels.

In no time at all, you’ll get used to the car’s connection to your mobile phone, which makes the ŠKODA KODIAQ an extended and enlarged version of your smartphone, easy and safe to use in every possible situation. Nowadays, it’s a feature you try once and never want to do without. The same can be said for the lane-keeping assist or adaptive cruise control, which makes even dangerously pulsating traffic jams nothing to worry about.

“It’s a car I trust, and it’s made driving a hobby again,” says Michal Maroši. During his career, he has managed to race in salt caves and bungee jump on his bike. He has won the world cup in fourcross, raced downhill for many years, participated in many slopestyle races and competed four times in the dreaded Red Bull Rampage. His greatest strengths are his experience, versatility, fearlessness and feel for any terrain. There is no trail that Michal Maroši can’t ride.

Twenty-seven-year-old freestyler Jakub Vencl has already made his mark in the world-class category. He made his presence known with his flawless and technically demanding rides at the Crankworx races in Les2Alpes, France, Rotorua, New Zealand, Whistler, Canada and Innsbruck, Austria. No jump is too high or long for Jakub to jump off it and perform some of his favourite tricks, such as a backflip or a 360° with a barspin.

Michal and Jakub are not just exceptional riders. They are also trail-builders. While Jakub’s signature style is imprinted on the shape of the Kálnica bike park in Slovakia, Michal started building trails for a living after his racing career ended. Together with his colleague Filip Majkus, he opened a franchise of the German company Schneestern in the Czech Republic and in just one year, he has created bike parks in Prague, Železná Ruda and České Velenice. The pair of Czech bikers went to Sölden to see not only how the local trails are ridden but also how they are designed and built.

Sölden trail-builders Johannes Dietl and Tommy Mayerhofer are taking them both on a brand-new trail: the Olm Volle Line. When completed, it will be a double black diamond – the most difficult – and according to its creators, it will have all the parameters of a World Cup downhill course. Michal Maroši rates the trail as very steep, bouncy and technically demanding. 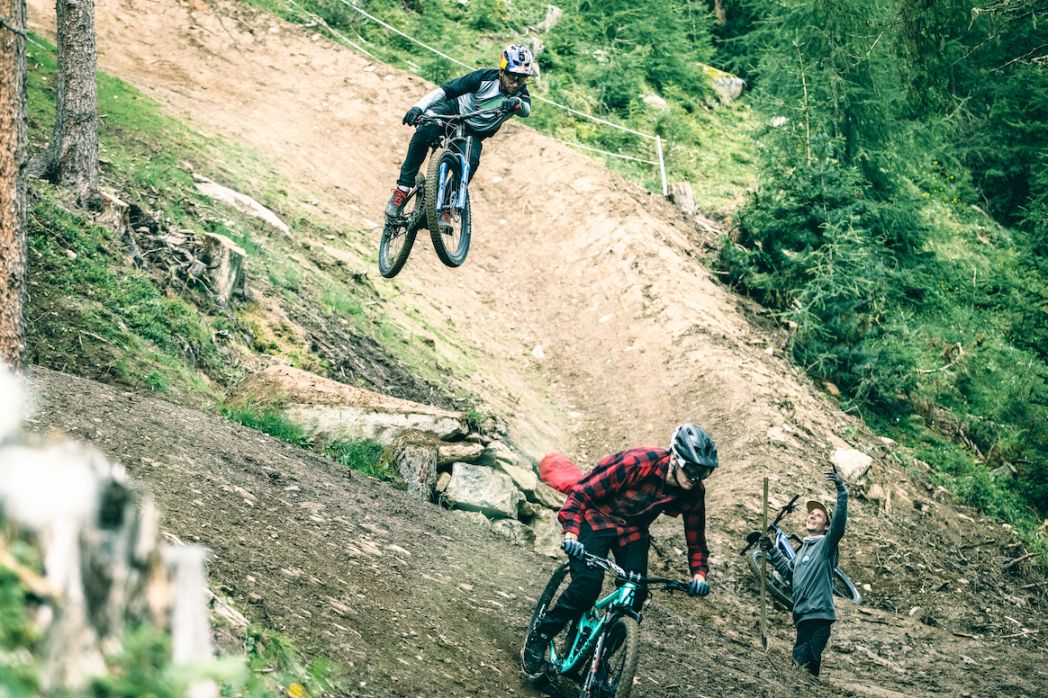 It is on this trail that Michal and Jakub show how well they complement each other. While Michal is dive-bombing even in the steepest sections, Jakub is leading the way in the places where there are big jumps and artificial obstacles. “At my age, I don’t want to crash anymore but I let myself be egged on when I see that it’s possible,” laughs Michal when he sees Kuba cleanly go around a high and very perpendicular wallride with a bounce. “If he can do it, I’ll do it,” he says, launching himself at the obstacle and landing safely. That’s the right moment for both bikers to bump knuckles in celebration.

But Sölden Republic is not just about artificial trails. There are ridge runs with breath-taking views, swimming in glacial lakes, sleeping by the water and delicious Tyrolean cuisine. “Knedlo-vepřo-zelo’ (pork with dumplings and cabbage) is a Czech national dish, but the one from Sölden won me over,” says Michal Maroši. After the ride, he parks the ŠKODA KODIAQ and its trailer by the lake, where a joint Czech-Austrian barbecue is about to take place. They talk about riding and trail-building long into the night around the fire. Michal and Jakub reminisce about moments from their races, Johannes and Tommy enthusiastically describe what awaits the boys the next day in Sölden Bike Republic. Every day on the bike here is a holiday. Come and see for yourself.