Do you remember how someone made you close your eyes when you were little and when you opened them again, there was a surprise waiting for you? What would today’s version be? If you were to close your eyes and keep them closed until you were at the best place for road cycling in the world – where would it be? We can tell you: in the Kaunertal Valley in Tyrol.

“I knew that two girls were coming to Austria from Czechia and I wanted to surprise them,” says 26-year-old Nora Turner, a cyclist from Vienna. “I’ve put together a list of the best places, both those I’ve been to and those I’ve always wanted to visit, and two stood out: Kaunertaler Strasse and Kühtai. Two destinations in two days were awaiting us. So we could make it everywhere safely and on time, we had the brand-new, fully electric Škoda ENYAQ iV at our disposal.” 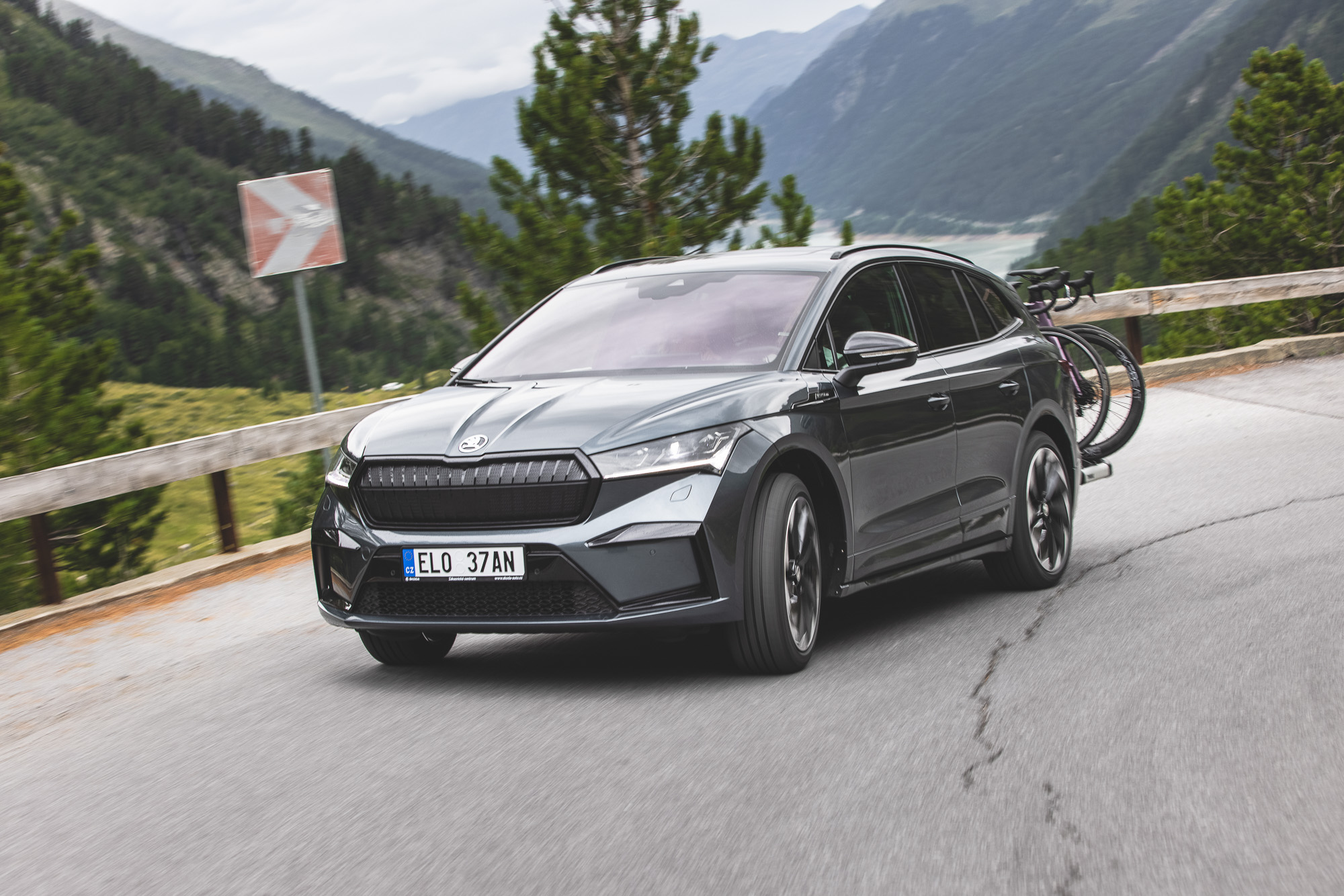 Tereza Unzeitigová and Alice Nosáková have come to meet Nora in the mountains. Both girls are members of the Girls on Bikes club, which aims to make cycling more accessible to women and show them that bikes aren’t just for men. The club, founded by Czech cyclist Jana Trávníčková, has been active mostly in the past year, during which the members have organised collective rides through Czech mountain ranges. But today, Tereza’s and Alice’s destination is the Tyrolean Alps, which takes six hours of driving to reach – on one battery charge. Their bikes are hoisted on a rack hooked to a towbar behind the car.

The first time they meet Nora is at a chalet. After the initial shy small talk is over, it’s obvious that they are all on the same page and, what’s more, all of them are in a pretty similar shape, which is confirmed on the short introductory ride.

During the chat on a terrace in view of a glacier, they find out that they have more in common than they expected. All of them were introduced to cycling by their exes or current boyfriends. Nora even left her previous job as a marketer for the Volksgarten disco in downtown Vienna so she could have more time to pursue cycling. Alice, Tereza and Nora all also agree that when they go riding in an all-girl group and leave the boys at home, it’s a completely different experience. “We don’t race as much, we chat and make more stops, wait for each other, and don’t have a problem with treating ourselves to a coffee or a cake,” Alice sums it up for the trio.

Their first destination is the renowned Kaunertaler Gletscherstrasse, where all three will venture together in the cosy cabin of the electric car. “It’s so silent, I feel so much better when I know I’m not disturbing anyone and releasing emissions here,” says Tereza from behind the wheel. She likes the well-arranged touchscreen, the possibility to choose from various driving modes and also that the car has rear-wheel drive so it’s easy to turn and manoeuvre. When travelling downhill, she can’t help but notice the brake energy recuperation thanks to which a large portion of the battery gets recharged.

“Is there something you would like to tell us about the horsepower, torque, and the charging speed?” inquires Nora. “There’s not. For me, it’s important that the Škoda ENYAQ iV is large, spacious, fits everything, looks good, isn’t noisy, and see? Even though we spent half of the day driving up and down, the battery is still two-thirds full,” smiles Tereza and Nora nods. “It’s true that with my 180 cm of height, I’m not used to having so much legroom in the rear seat.” 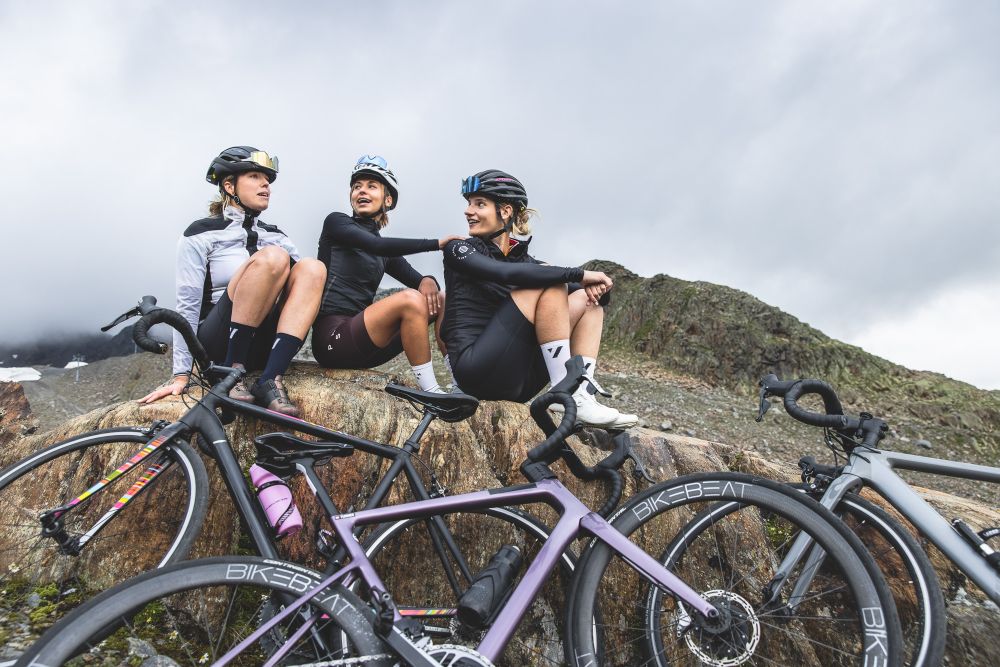 In the afternoon, the girls were prepping themselves for a stretch of road that meanders in 27 hairpins from Feichten im Kaunertal at 1,287 metres above sea level all the way up to the Skigebiet Kaunertal Gletscher ski resort perched at 2,750 metres. It gains 1,500 metres of altitude in the course of 26 kilometres. The panoramic road has a quality surface and belongs among the most sought-after in Austria.

“But because we are talking about a dead-end road finishing up at the glacier, the traffic isn’t so bad as elsewhere,” says Nora. She adds that since 1947, a stage of the traditional Österreich-Rundfahrt road cycling race has been taking place here.

When the cyclists make it to the top, they’re met with a slight drizzle and a temperature drop of 4°C. “Quickly, let’s go back down to the valley,” Alice encourages the girls as seemingly the boldest rider of the team. The last kilometres to the chalet are, again, made shorter by the car. After the swift descent, the crew is sure to appreciate the heated seats from which they can watch the starry sky via a panoramic roof window. “Something for romantic souls,” they all nod in agreement later at a barbecue. 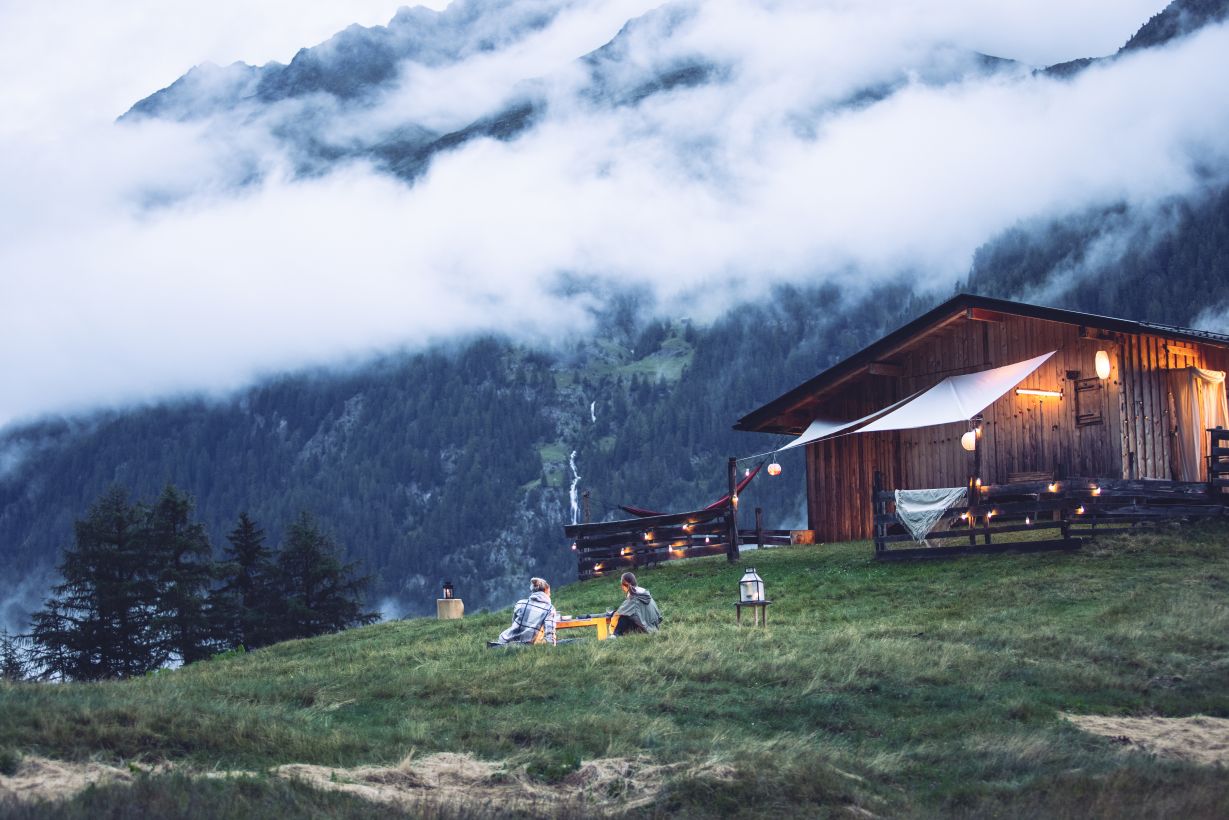 Kühtain awaits them the following morning, another spot where Austrian cycling history is being written. It’s right there where the famous Ötztaler Rad Marathon takes place. Located at 2,020 metres above sea level, it’s one of the highest ski resorts in Tyrol. “We have something to offer anyone who likes ascents and gaining altitude. You can find a lot of climbs here, that’s the one thing we don’t have a problem with in Austria,” laughs Nora who has her own blog, Unicorncycling.me, detailing her cycling exploits. She adds that Austria also appeals to those who prefer riding on flats. For example, a great recommendation is a trip alongside the Danube River that can be done starting from the German city of Passau, continuing through Linz, and all the way to Vienna.

“We have a plethora of cycling lanes. Not as much as the Dutch but really a lot and the drivers are kind and tolerant towards cyclists, I would say more than in the surrounding countries,” says Nora.

What was the best part about the trip to Tyrol? “We got to meet Nora, see the amazing nature, Austria, the mountains, wonderful roads, and it was fun – we’ve treated ourselves to a really nice girl’s trip,” conclude Tereza and Alice. “And the next time, we’ll come back here without cameras,” they promise Nora before they get in the Škoda ENYAQ iV and return home.