This year’s wet Paris-Roubaix left us gasping for breath, along with many riders. We had to watch it from afar, but luckily, Cameron Jeffers was on the spot with the Škoda SUPERB iV and agreed to share his experience with us. Here’s what he had to say.

My trip down to Paris for the 118th edition of the infamous Paris-Roubaix wasn’t stress-free. After a seamless drive down in Shimano’s Škoda SUPERB iV I was feeling relaxed and excited for the days ahead. However, after 800kms I arrived in the small town of Compiegne at around 21:00 on the eve of the race only to find that my hotel was completely shut. After calling the number on my confirmation and ringing the intercom multiple times, I figured I was out of luck. At any other time of the year I’m sure I could have just driven to the next hotel and booked a room for the night. But during the weekend of one of the biggest bike races of the year, the town was packed.

I visited a local hotel where a number of the pro teams were staying, and even though there was ‘no room at the inn’, the polite young gentleman behind the desk helped me locate another hotel. Some 45 minutes away! The time was now 23:00 and I was finally in a hotel room in some budget hotel in the depths of Northern France. I headed to bed.

At 6:00 my alarm went off. Despite a short night’s sleep, I was wide awake and excited about my day ahead. I don’t think it had quite hit me yet that I was going to be spending my day in the Škoda Neutral Service car in such an iconic race. This truly was a once-in-a-lifetime opportunity.

Due to the length of the race (259km) and the relentless terrain the riders faced, the neutral service team was split in two. Team one covered the first 100km, up until the point of the first ‘Pavee Sector’, where team two, the team I was with, took over.

We got to the meeting point about three hours before the race would pass, meaning we had plenty of time to kill. We were in the small town of Fresnoy-le-Grand and already the streets were lined with fans eager to get a glimpse of the racers as they flew past. We found a small typical French cafe where the locals were already on the beers at 11:00. I opted for a double espresso.

Before long it was time to get to work. The race was fast approaching so we jumped in the cars and waited to be given the green light. I got put in a car driven by Brian Van Goethem, a Dutch fella who raced professionally for 10 years, retiring from Lotto-Soudal in 2020. Brian had raced Paris-Roubaix twice during his career and it was totally mesmerising to hear his insight and knowledge as to what the riders had ahead of them that day.

For us, other than sliding around the odd cobblestone, it was a fairly uneventful day. None of the riders required our service, though the guys did have to fix one puncture. Sadly though, it was the car. With about 15km to go, we hit an enormous pothole at about 80kph and immediately the flat tire light came on, and we knew we were in trouble! 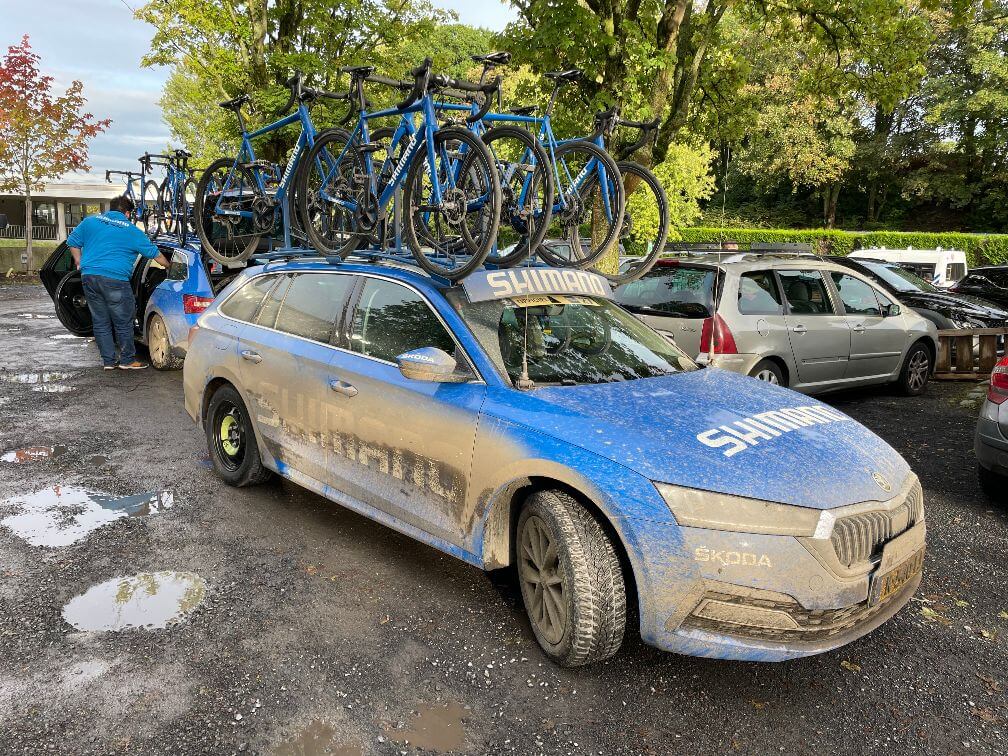 The guys pulled over and quickly got to work changing the wheel. I think from the moment of impact to getting back on the road it was around seven minutes. Seriously impressive! A job in the F1 pit crew beckons for these guys.

Soon we were back on the road, but the front of the race was long gone. The riders were racing full gas to the finish in Roubaix at this stage, so at this point our day was pretty much done. The cobblestone sections had also finished so it was a fairly relaxing drive to the finish.

Four hours of driving later, we arrived at the Roubaix velodrome, where we met up with the rest of the Shimano Neutral Service guys and chatted about our experiences and antics during the day.

Thanks to Shimano, Škoda and WeLoveCycling for providing me with the experience of a lifetime. Is Remco Evenepoel Cycling’s Next Superstar? Would You Shave Your Legs? Why Do Cyclists Do It