In just two years, Tour De Tietema has become a hit with the cycling community while taking YouTube by storm and rising to be one of the leading channels of the sport.

Now, they are looking to push cycling itself towards this level of popularity. We Love Cycling sat down with Bas Tietema, one-third of the channel creators alongside Devin van der Wiel and Josse Wester, to discuss the success of the company and what can be realised by the outfit after its incredible first two years.

Bas who has been born and raised in the Netherlands used to be a top up-and-coming rider in the youth ranks with BMC. He not only rode with the likes of Mathieu van der Poel and Sam Oomen but also had great results, most notably a third place at the Paris-Roubaix Espoirs in 2014.

Despite the serious potential, the Dutchman struggled with injury and illness, which caused him to leave road racing behind a few years ago. He started by telling We Love Cycling: “I had three years with the BMC Development team with good results and the races like Paris-Roubaix really suited me. But, in the second year, I broke my collar bone. In the surgery, I got some painkillers and other medication, which gave me a skin problem. After the injury, every time I rode my bike, my skin would heat up and I would get a rash. This was every time I rode my bike so I struggled with that, less training, worse results. All of that.

“I knew my level and what I could do, and you’re riding with those big names and my level wasn’t improving, but they were. I now love what I do, but you have so many guys in cycling who don’t earn much money, don’t finish. I’m happy that I can do what I want and make money off it.”

It was in 2019 when Bas saw a gap on the market, noticing that cycling has somewhat of a problem creating fun content to connect both fans and riders together. It is a sport where fans are as close to their heroes as they could possibly be, yet a rider’s personality can sometimes be hard to decipher.

Alongside Devin (who he credits as the creative mastermind behind each video) and Josse, they looked for a new way of sharing the stories of both the athletes and the sport. 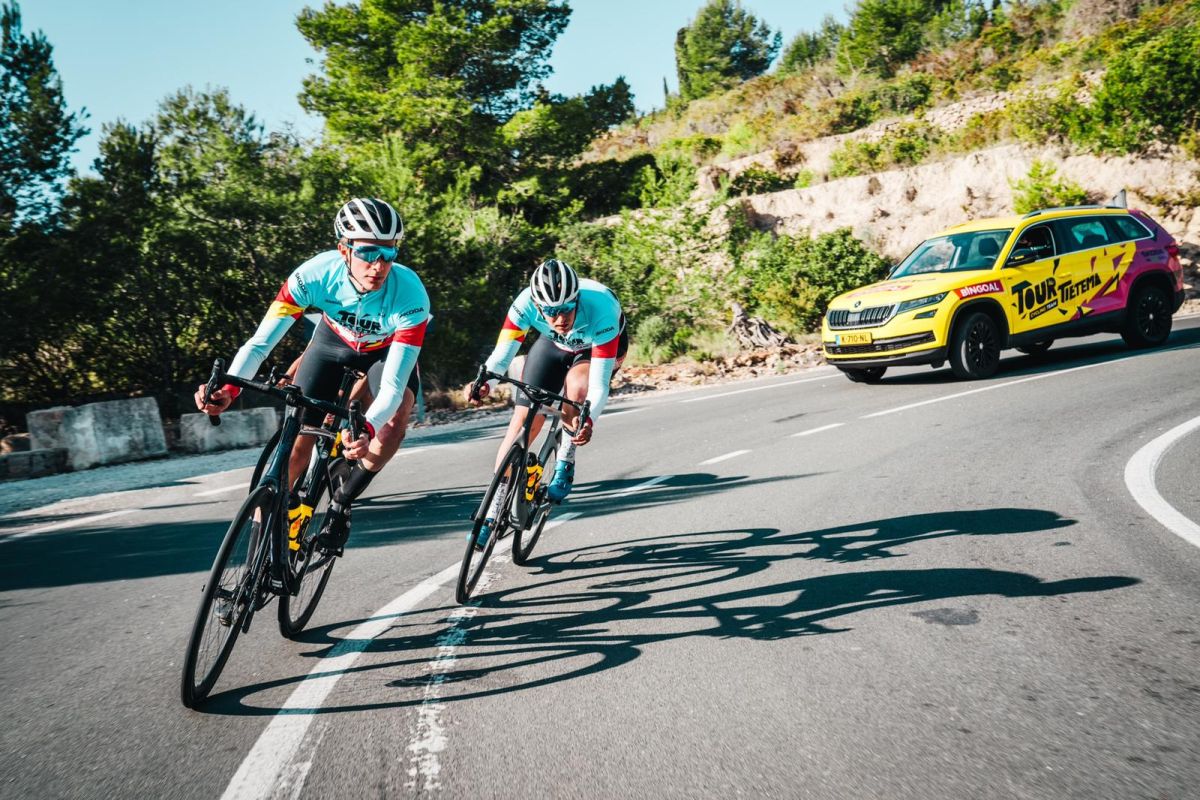 “My idea was for people to watch the videos and enjoy cycling even if they didn’t know all of the riders. I was looking for people who believed in the story as well and I came into contact with Josse and Devin, and Devin had just done an internship with Jumbo-Visma. He had never been into cycling – he came to it from football – and he didn’t have any idea who the riders were, but he was very good at storytelling. He wanted to make his own stories, so it was all the right time, right moment. That’s how the story started back at the 2019 Tour De France.”

The channel has gone from strength to strength since then. At the start, there was just three of them. Now, they are joined by two freelancers, one full-time employee, and another person focusing on their website – launched this year with an added subscription model and shipping logistics.

This is a serious venture, really looking to change the face of the sport, whether by returning home from Sicily in the same amount of time as the 2020 Giro D’Italia takes or delivering their now-classic pizzas on the Champs Elysées at the end of the Tour de France.

Speaking about those early days and his relationship with the pro peloton, he explained: “In the early days, it was tough. The cyclists see you as belonging to the journalists, they know broadcasting. It is an old-fashioned sport, and YouTube can have a negative image. People kept their distance and were wondering what we were going to do.

“Since then, the riders started trusting us and know that anything we make is always in a positive light for cycling. We are not there to make the headlines with negative stuff, we have built that trust and now we see those guys watching our videos. Around 60 to 70 of the riders at the Tour this year knew about us and watched our content, so we have that trust now.”

With the pizza orders set for a year-on-year increase, it helps that they can offset those costs with a channel that, although niche, is arguably the biggest of its kind and that growth has taken the team by surprise.

“You say we now have 120,000 subscribers and that is quite unbelievable. You know, how many people are interested in cycling content? When you are looking at YouTube, you look at lifestyle, cars, more general stuff. And cycling is still a niche. When we did the first Tour De France, the plans were to do other sports like the European Championships in football and the Olympics – a wider range.

“Because all of those events were cancelled due to Covid, that’s how the journey of us riding our bikes started. Devin and Josse bought their first bikes, and we noticed that this could be something interesting as more and more people were buying bikes. That’s how we started with the Flanders series, going from not riding bikes to riding the Tour of Flanders. What’s unbelievable is that we are getting 200,000 to 300,000 views on each video and there is no cycling-team channel that can reach those numbers.”

Now, they are also looking to achieve more on the bike through their current series, Josse Goes for Gold, seeing how far Josse can go starting as a novice rider. Škoda proudly supports Josse in his endeavour and provided him with a special team car.

He has already received help from Team Jumbo-Visma in his pursuit of glory and Bas is hoping his journey can give the team even more identity as they move forward.

He explained: “Josse is riding on the lowest, lowest level in Holland, but thousands of people are watching him. If you can make a good story and that is something I see, that everyone is focused on results in cycling. You may win a stage of the Tour of Turkey for example, but as a rider you can make a story about yourself and show yourself as someone different. That’s important now.”

A new wave of people, some former World Tour riders like Laurens Ten Dam, are also jumping into this world, with his Live Slow Ride Fast channel.

Bas sees these alternatives as a way to grow and enhance the sport.

“I see that cycling has a strange model. You now see some riders like Sagan, Cavendish – they know how the sport works, it’s entertainment. They are there for entertainment. People like Lachlan Morton, Ten Dam and the Legion Team in the States are not always riding at the highest level, but they have a big following and are making more money than some World Tour riders.”

With a six-digit following at the time of interview, Bas and his team are showing big companies like Ineos Grenadiers and Rapha (both have a smaller audience) the way forward in creating engaging content for younger fans.

But what does the future hold for the Dutch team?

“We still don’t know whether we are going to go into more road racing or are we going in the future to different sports? We haven’t made a decision because everything is changing so quickly. From one year ago, if you told me we were making this type of series (Josse Goes For Gold), then I would have said no, so it’s really hard. There is potential to grow this into an international team, who knows?”

Whatever the future holds for the trio, they have got into the heart of cycling fans – and riders – all over the world. Their goal was to turn cycling upside down – it seems like they are going the right way to doing just that. Pro Cycling Chef Hannah Grant: ‘I had no idea what I was getting into!’