Paris–Nice is a legendary cycling stage race that has been held annually since 1933. It has a long and rich […]

Paris–Nice is a legendary cycling stage race that has been held annually since 1933. It has a long and rich history, which makes it very appealing for professional cyclists to compete in. It also means that by today’s standards, riders in the early years were using some very unusual tactics. Can you imagine alcohol and cigarettes being a normal thing in the hands of pros these days? Let’s take a trip back in time to see how competitors used these things.

The early days of cycling nutrition were wild! There were no nutritionists, no team chefs, not even team members to help you out! Riders had to rely only on themselves. That’s why things like smoking to “open up” lungs or hydrating with beer were nothing unusual. Let’s look at what cycling nutrition used to be like compared to today.

Eat anything you find along the way

Early in the 19th century, stage races like Paris-Nice had no specific food stops or pit crews. Riders just stopped along the road to refuel with outside assistance, something that would get you disqualified in modern times! And the foods they chose to eat were also very different.

Cigarettes to open up the lungs

Cyclists also smoked cigarettes while riding, especially before steep climbs, in hopes of opening up their lungs. We can only guess if it had any real effects. Regardless, this practice gradually went away as more research showed the actual impact smoking has on health. In the following picture you can see Mario Cipollini smoking a cigarette during a stage of the 1994 Paris-Nice. 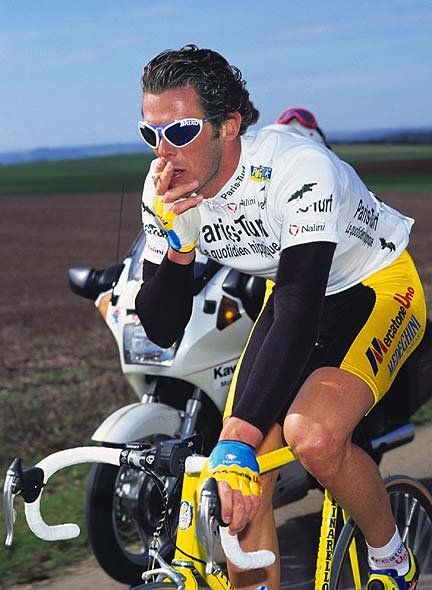 Alcohol for a more enjoyable ride

It was a common practice to drink alcohol while competing in endurance cycling all the way until the 1960s. Riders drank various drinks from beer to wine to champagne, for both hydration and, reportedly, to enjoy the ride more. While one beer won’t hurt your hydration status, we now know that there are much more effective ways of hydrating. On a funny note, if riders today had to ride 18-hour stages, like they used to back then, who knows, maybe alcohol would come into fashion again.

Today’s cycling nutrition has come a long way, but it’s good to look back to fully appreciate it. When you watch highly organized teams take care of their riders or domestiques, providing much needed nutrition and hydration to the team captain, think of the past Paris-Nice competitors and the hardships they had to go through.

The Final Days of Winter: Finding the Motivation to Ride (When You Really Don’t Want To)

The Craziest Bicycle Races to Think Twice Before You Join