Chris Froome has officially been absolved of any sin, and this means we’re on for a race of Biblical proportions. So, what have Le Tour organisers, the AMO, conjured up for the riders this year?

Mont Ventoux cast a long shadow over last year’s tour. On the anniversary of Major Tom’s tragic death on its slopes, the mountain was omitted as a mark of respect. Stage 9 will play on many of our minds, there being an all too recent reminder of why the road to Roubaix is best approached with respect.

The cobbled pavé makes its first appearance just shy of 50 km. This is brutal, and it is dangerous – and all before the race is halfway through. Froome will find himself out of his comfort zone again. Nibali, on the other hand, has a solid track record on the pavé. Expect bruises and grazed skin.

This stage will look great on TV. The opening kilometres from Annecy will be flat but the mesmerizing beauty of the Alps will give way to some punishing climbs. Not least, the peloton will climb up the east side of the Montée du Plateau des Glières – featured in Le Tour for the first time.

The Plateau des Glières averages 11.2% gradient with sadistic 20% sections that will exacerbate even the smallest of niggling injuries. Oh, and if this isn’t painful enough, the last 2 km of the climb is on dust road. The weather forecast has yet to decide if it will be sunny and suffocating, or rainy and treacherous.  Either way, tune in.

Having already traversed the Montée de Peyragudes, and the brutish Col de Val Louron-Azet, the final climb of stage 17 would usually see GC contenders keep each other in check while supported by a few trusty domestiques. But, this stage throws a spanner in the works.

Race organisers have decided that the riders will start this stage in waves according to their current standing in the GC. Teams will be split. If you’re not in the top group by this stage – forget it. You’re done. Unless you’ve got a strong lieutenant and at least two other teammates, you’re on level playing ground.

Mike Cotty, the founder of The Col Collective, gives his views on the Portet

Also, this is the first time Le Tour visits the insanely steep, oxygen-starved heights of the Col du Portet.  Team Sky have demonstrated that excellent race planning can afford Froome the opportunity to shine in great spontaneous moments like his attack on the descent from the Col de Peyresourde in 2016.

There’s no guarantee that any GC contender will have sufficient domestiques to help them – unless they’re GC contenders themselves. Anything could happen, and this will worry Team Sky. And for good measure, the AMO decided the stage should approach from the same direction Froome was broken by Aru.

Now that you know what’s coming in stage 17, let’s reverse engineer the AMO’s reasoning. Prior to what could be the defining stage of Le Tour 2018, the peloton is introduced to the Pyrenees for the first time this tour. If you’re not in touch with the GC lead at this point, forget the yellow jersey. 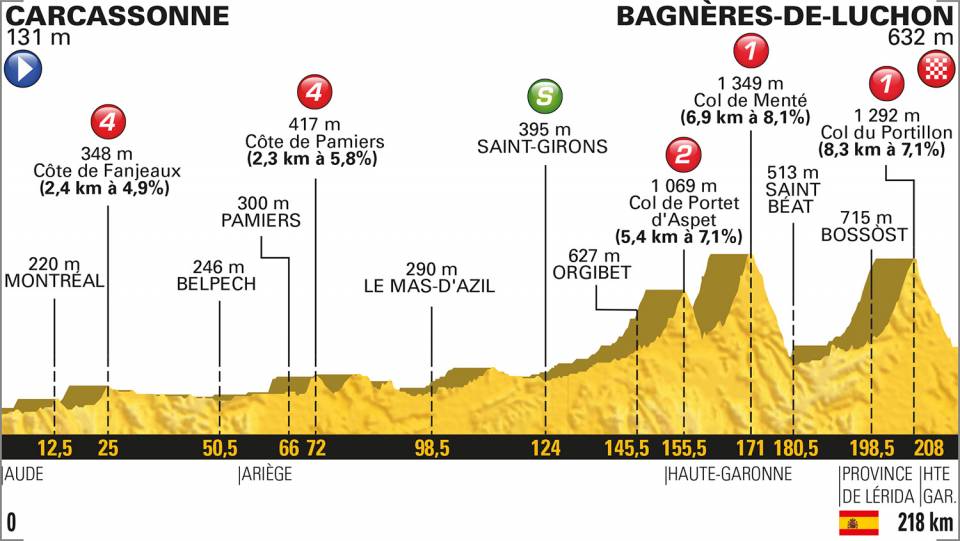 In the last 70 kilometres, after sweeping away from Carcassonne, the riders get a taste of 3 climbs before their tyres hit Bagnères-de-Luchon. Then, after 208 km of riding, the last 10 km are pure descent.  Expect opportunities to be taken – as well as desperate risks.

Which stages do you think will define this year’s race?