I arrive in Ireland by ferry in the late afternoon. My only plan for the day is to get away from Rosslare city and harbor and find a place to pitch my tent. In England people told me the wild camping would get easier getting to Wales and even more so in Ireland, but I’m surrounded by farmland without a farm in sight. The houses look empty and quiet. The only people I see are in the cars that pass me occasionally on the narrow backroads. I don’t like opening a closed gate to camp in a field, it doesn’t feel right. I don’t mind breaking government or institution rules, but entering someone’s private property without asking is not my style.

I decide to knock on the door of a house with a smoking chimney, a sign of life. Two red-heads peek outside from behind the window and a woman opens the door. The girls pop up behind her. I ask to fill up my water bag and if she can advise me where I can set up camp for the night. She thinks ‘anywhere is okay’ but also advices me to ask a bit further down the road where it looks like they actually own some land. The oldest girl explains to me where she thinks I’ll have the best chance.

As I roll on to a neighboring barn their dad just drives up to the house. The Polish workers at the barn can’t give me permission, because they only rent the place. They’re packing plants that will actually be shipped to the Netherlands. As I get back on my bike a car appears, the oldest red-head in the passenger seat. Her dad tells me I can follow them back to the house and pitch my tent in their garden. Later that evening, as we’re having tea and cookies in the kitchen he tells me he’s a cyclist too… I could’ve known.

We exchange stories about travel and culture. The mom and the two girls (10 and 13) take turns summing up what is characteristic for Ireland and the Irish. One of those things is the hospitality and the tea that will always be offered. And they’re right. It’s my first night in Ireland and I’m surrounded by a lovely family. In the morning they call me inside for breakfast. As the mother returns from bringing the kids to school she tells me how they were excited to tell about me in class, the woman that rides her bike around the world and camped in their garden. I got on my bike with a smile on my face. I think I might like Ireland. As I ride along the south coast I come across a lot more hospitality. Warming up in visitor centres (with tea of course) that are open year round (where they were all closed in England) and getting permission to camp in little parks in towns. They live up to their slogan: Céad Míle Fáilte. ‘One hundred thousand welcomes’. I’m camped in a little park on the edge of the town Sneem on a rainy evening, just about to turn in, as a car drives up to my tent. A man gets out. Shit, there we have it, unwanted company. The man comes up to me in the drizzle and asks me: ‘Are you okay? I saw you riding down the road earlier and I was wondering if you need anything. I live right up the road. Do you want a tea or something? Anything? Well, I live just up the road. Goodnight then.’ Goodnight. The Irish seem to be a bit like the Icelandic. They’re not very visible, unless you’re in a town centre. You don’t see them around the house. I often wonder many houses are even inhabited. They’re furnished, but hardly any have plants, flowers or any sign of life around them, they look somber. 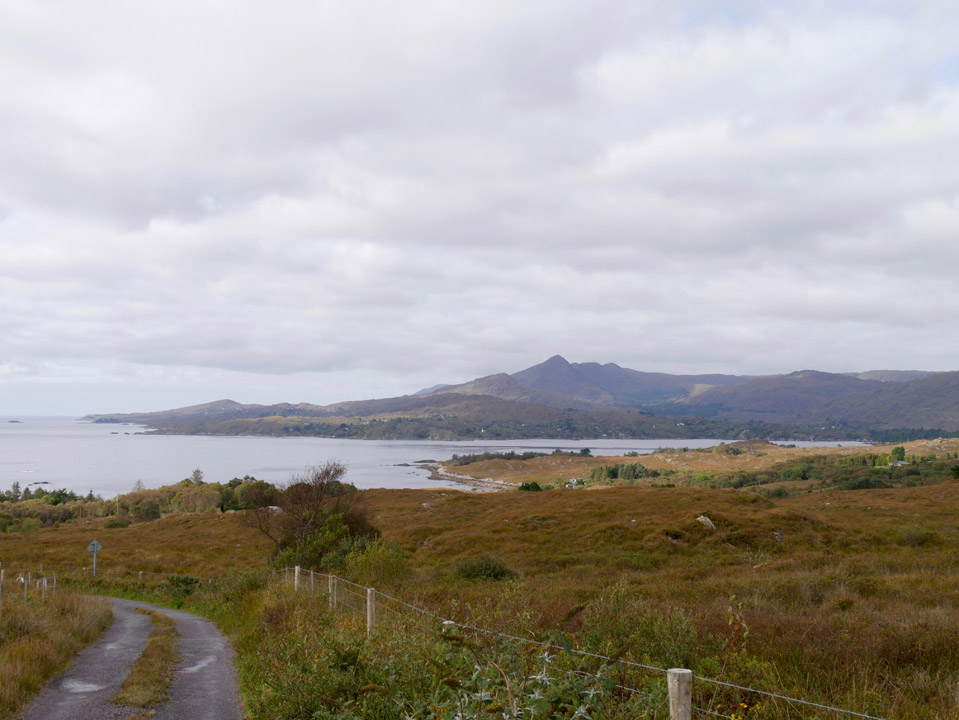 With reaching the western peninsulas I also reach tourist territory. And for a good reason. The Beara peninsula is beautiful. It’s a lot of ups and downs but the views make it worth the sweat. The famous ‘Ring of Kerry‘, one of the touristic highlights of Ireland, is next. The tourist season is really coming to an end and it’s quiet in the little giftshop dominated towns. I make a quick stop at the chocolate factory in ‘the Glen‘ and after an extensive chocolate-taste-session I’m ready for the second steepest ascent of Ireland. Well, no, I wasn’t ready really. The lady at the tourist information told me ‘after the Glen there’s a bit of a climb, but the scenery is nice, so…’ Well, I had to get off my bike an push, something that hasn’t happened to me since the ridiculously steep rocky trails in southern Mexico and before that I can’t even recall when I last pushed my bicycle. The sun was hot (this is autumn in Ireland I’m talking about) and I even stripped down from a t-shirt to a tanktop as I was overheating. Travelling the World with Hera van Willick: What’s It Like to Be on Holiday Every Day?

That night was incredibly clear and chilly and the full moon shone bright like a gigantic torch illuminating my tent in Kerry’s official Dark-Sky Reserve. After several nights of camping I was happy to arrive to the atmospheric town of Killarney where I would stay at the house of WarmShowers host Timmy. One of those WarmShowers places where I instantly felt welcome and comfortable. It was nice talking to someone who has travelled a lot too, discussing the possibilities to cross Mongolia on horseback, cooking together and then both doing our own again. On Sunday morning, the morning of my birthday, I walked into the living room to find a chocolate pastry with a candle and serpentine! As always when I’m travelling and I have my birthday I allowed myself to be incredibly lazy and eat lots of treats. 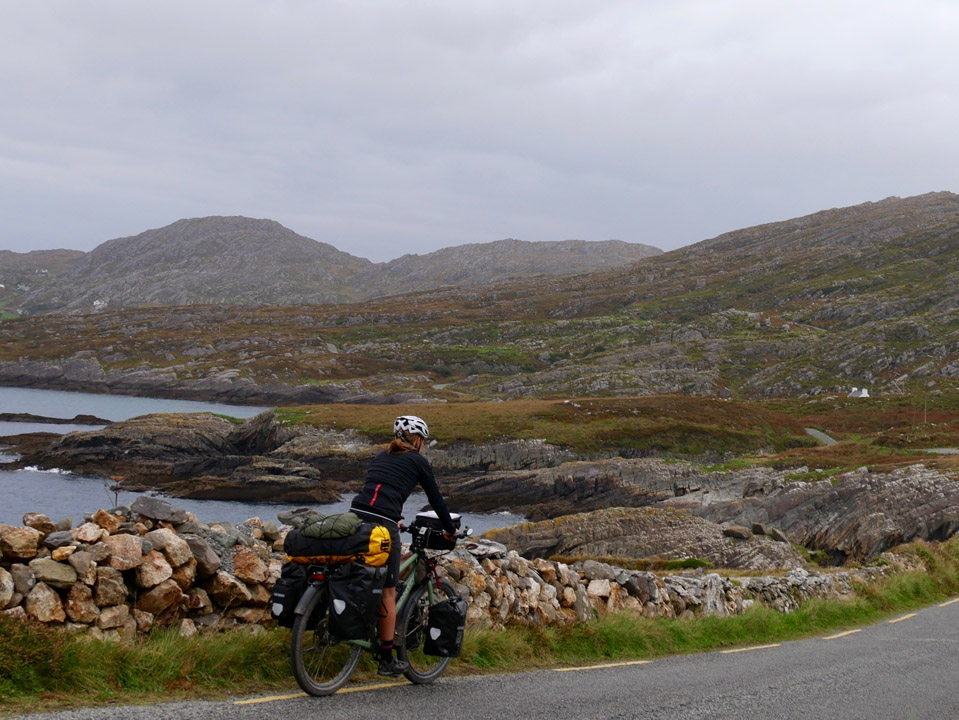 After two relaxing days I felt ready for some more biking. The weather changed and it rained most of the day. Though I haven’t experienced any heavy rain yet in Ireland, it’s all quite friendly rain and drizzle, unless the wind picks up and smacks it in my face. I made my way to the impressive 214 meter high Cliffs of Moher and descended back to sea level to land in the garden of a nice warm hostel. My tent is the only one pitched in the back, all the other guests sleep in inside, but I still get to enjoy all the luxury of staying at a hostel. A big kitchen, fireplace, WiFi, shower, laundry machine and a table to sit down at and write my blog. Travelling the World with Hera van Willick: A Brief Visit to the North

My overall impression of Ireland is good. The western part is beautiful and the people are very friendly and helpful. There are so many lovely quiet roads to choose from. It’s very green (thanks to the rain). The only thing that I’ve really missed, ever since coming into England, are town squares. In the U.K and Ireland there are hardly any nice town squares to sit down on a bench, make my lunch and watch the daily life as I love to do. Instead I often sit down on the terrace of a closed pub as an alternative.

Then, to finish off this blog, I have some great news to share that’ll also determine my direction for the near future. The short film named PEDAL that I made together with filmmaker Scott Hardesty got selected as a finalist at the Banff Mountain Film Festival. Which means that my film will be screened there for hundreds of people on an enormous screen. Banff is one of the most renowned film festivals of its kind and I’m incredibly excited and a little proud that our film will have its premier there. I’ve decided to attend the festival. I absolutely loved it there last year and now, with my own film in and the chance to reunite with some lovely people, I think it might be even better. And after the ‘nine epic days’ (as they’re called) of the festival, it’s my plan to head east. By bike or maybe partially by train, the exact plans are still in the making. 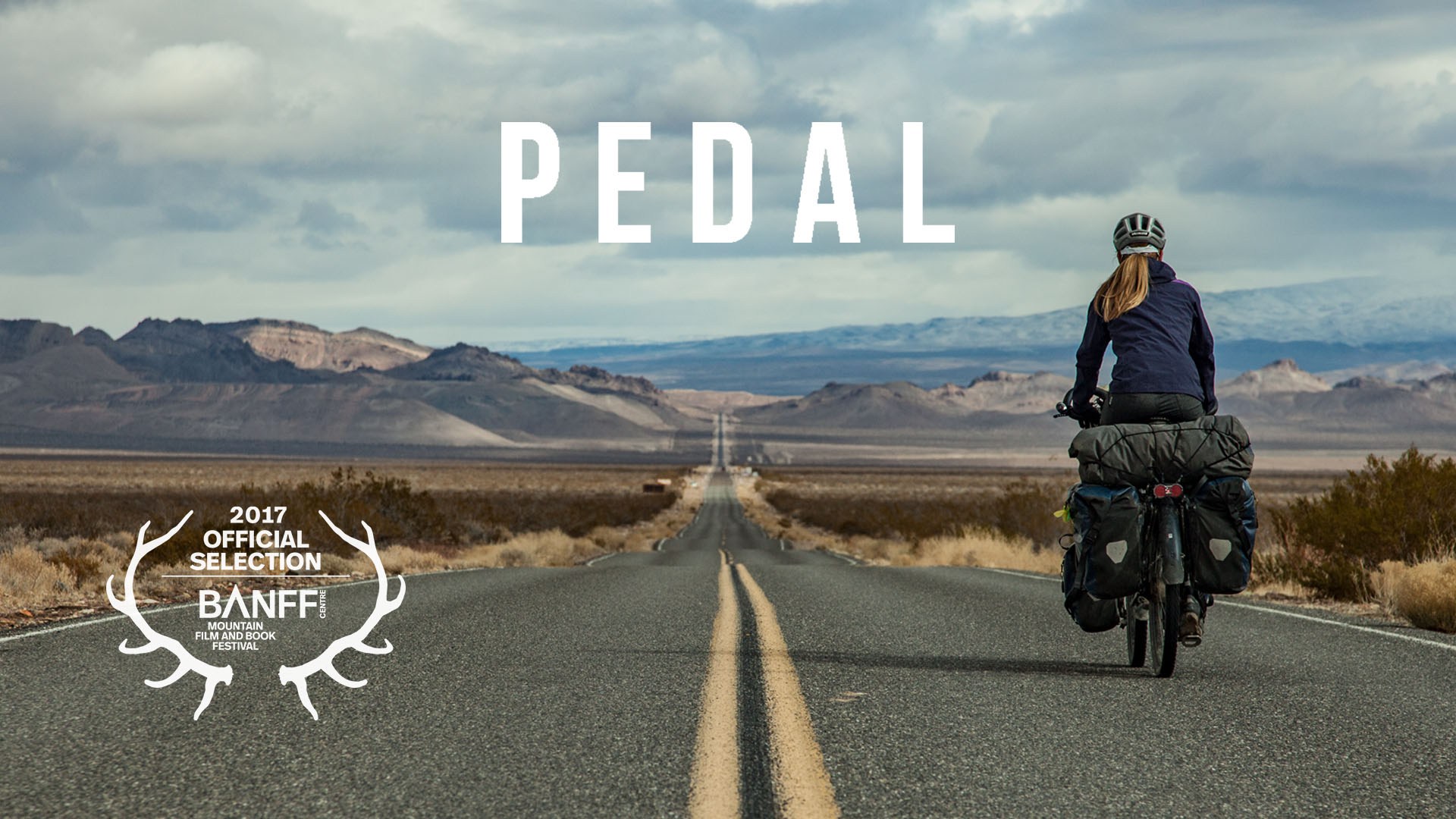 Sadly, I can’t share the film with you yet. First it has to have its big premier and after that we’ll submit it to several other festivals. But, I promise, as soon as it will be made public, it will be posted here on WeLoveCycling.com. Two weeks from today I’ll fly to Canada. But before I do so I’ll make sure to update you about my (now) remaining two weeks in beautiful, green, wet, Ireland.

Go dtí an chéad uair eile, or, until next time!