Ups and down of the former MTB downhill heroine

Missy Giove was about to load 200 kg of the best Californian marihuana to a garage somewhere in the woods of New York when she discovered a tracking device hidden in the wall of her trailer. In a fraction of a second, she realised that she was screwed.

Without hesitation, she jumped in her truck and dashed down the woods with the trailer still attached behind the car. Apart from the loads of pot, there were a mountain bike and a dirt bike parked in the trailer, which, until now, worked as a perfect camouflage. The former top MTB racer would have hardly been suspected of drug trafficking even though she travelled with a heavy trailer from state to state more than frequently. However, this time things have developed in a much different way, and Missy knew she had to run for her life.

As an experienced racer, World Champion and double World Cup overall winner, she knew all too well that every second counted. Speeding down the fire road full of roots and stones at 80 km/h was part of her work as the MTB downhill ace, and she was paid to be the best at it. Just now, instead of the handlebars, she was clenching the steering wheel, hoping to escape the attention of the surveillance aircraft circling high above the tree crowns.

On top of it, there was also a DEA commando chasing after her. It took her only seconds to realise that because of the tracking device, the agents will certainly know her whereabouts, so there’s nowhere to go or hide. Reluctantly, she stopped, rolled the biggest joint of her life, and waited for her fate to be fulfilled.

The Hans Rey Story: Did Somebody Say Impossible? ‘No Way’!

At the beginning of the 1990s, which is considered the golden era of mountain biking, Missy was perceived as a rock star in the eyes of millions of fans. She had an eccentric appearance, a kinky hairstyle, and controversial manners, which made her unique among other athletes. There was a necklace hanging around her neck, with the dried body of her piranha pet Gonzo, and she also raced with ashes of her beloved dog Ruffian tucked into her bra. Her cover portraits were selling loads of mountain biking magazine issues, and male admirers learnt to cope with the fact that she was actually attracted only to girls.

She was riding on the edge. Her personal rule was to go big or go home and with this in mind, she was either taking gold or ending on the ground. During her bright career, she suffered at least ten concussions and not less than thirty broken bones, including a few ribs, pelvis and heels. 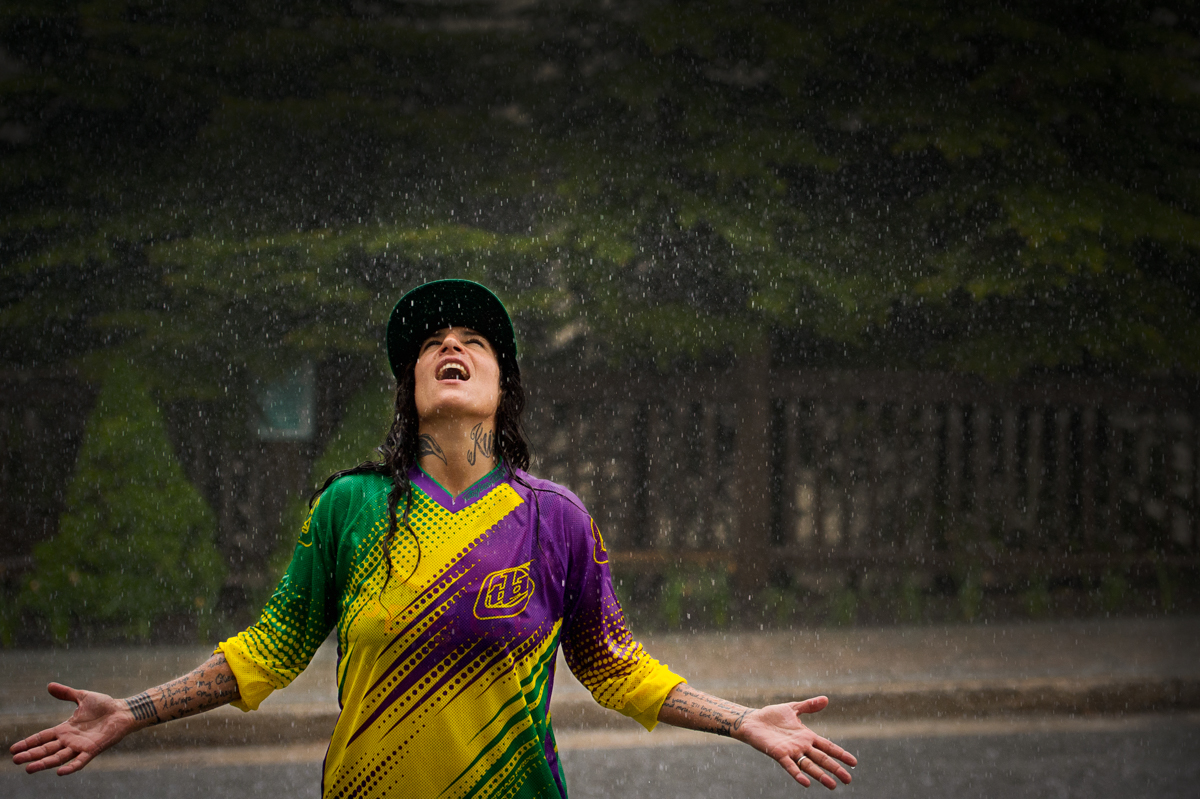 Her lack of fear and ability to ride downhill at an incredible speed earned her the nickname “Missile”. After competing for the legendary Yeti bicycle company, she was hired by Volvo-Cannondale professional team with an almost unlimited budget.

However, in 2001, her desire to win resulted in a double crash during the race in Vail, Colorado, which eliminated her from further racing for several months. The pain was so unbearable she could hardly train, so the controversial character of MTB scene decided to smoke marihuana in order to soothe the post-traumatic pain. And while the inflow of money from sponsors was reducing, another, obviously more lucrative offer came up…  smuggling dope.

In June 2009, five years after ending the career of one of the most acclaimed female bikers on Earth, Missy faced the threat of being locked in prison for 40 years for smuggling pot worth a couple of millions dollars. She never considered marihuana smuggling to be something wrong because she perceived her work as a distribution of joy and love. The prosecutor had a different opinion, though. Due to her above-standard cooperation during investigation and process, Missy was sentenced to six months under house arrest, five years’ probation, and 500 hours of community service.

In 2015, mountain biking photographers were surprised when Missy Giove, after more than a 10-year break, appeared at the start of the World Cup race at Windham, New York. The main reason allegedly was to encourage her wife Kristen in her fight with cancer. The Missile wanted to show to her love that if she can return to the sport, Kristen can defeat the malicious disease. We hope that everything is alright now, and we’re looking forward to seeing more of The Missile in the racing!

Will Beetroot Juice Enhance Your Performance?