Every year, 15 to 20 million fans stand along the Tour de France route. Each one of them is special and unique, however, it is possible to divide them roughly into groups. Can you find yourself?

There must be an official medical diagnosis. In this case, it is closely related to unbounded admiration for undernourished men wearing stretchy sportswear. Giving them a quick pat or at least touching them fleetingly? The Toucher just can’t resist and we urge everyone not to become one! It is simply too dangerous.

Any conceivable event can always be improved – with grilling. A larger crowd of people riding on a road is always a clear signal to move the mobile grill to that road. In fact, it doesn’t really matter if they travel in race cars, on floats, elephants, bikes…

Whatever you’re wearing, once you hear the whizz of tubular tyres, you run. Just like Forrest, you run, following the cyclists. There must be a deeper meaning to it. A philosophy of life. Zen. You run! Nothing can beat that.

If you own any damn thing that can be inflated and sealed hermetically, you bring it with you and wave it like crazy at a speed of Chris Froome riding upwind.

We Love: Bicycle Race by Queen

You are as busy as a bee collecting anything you can use in your hive… I mean, your very own ‘TdF shrine’ at home. As for the objects of worshipping – bidons, gloves, raincoats, anything thrown into the ditch, really. If there are more collectors circling above the gem, you don’t think twice to use violence to win it.

The Stranger in Disguise

Race cycling awakes your urge to become someone who you secretly are all year round, but don’t dare show it on working days, such as a banana, a cow, Asterix, Spiderman, a tomato, a cucumber, or an aubergine.

Regardless of the weather and outside temperature, the approaching peloton means you strip to the waist and put on display how much you’ve worked out (or eaten) during the year. If there weren’t cyclists in the background, you could be mistaken for a Love Parade fan. And yes, there must be some dancing to the recorded music from the MP3 player you’ve brought with you.

The purpose of your life on this planet is to wear T-shirts, baseball caps, hats, shorts, flags, fur coats, balloons, headbands, wristbands, glasses, helmets, wigs, swimsuits, raincoats, push-up bras or megaphones, under one condition – they are of orange colour. 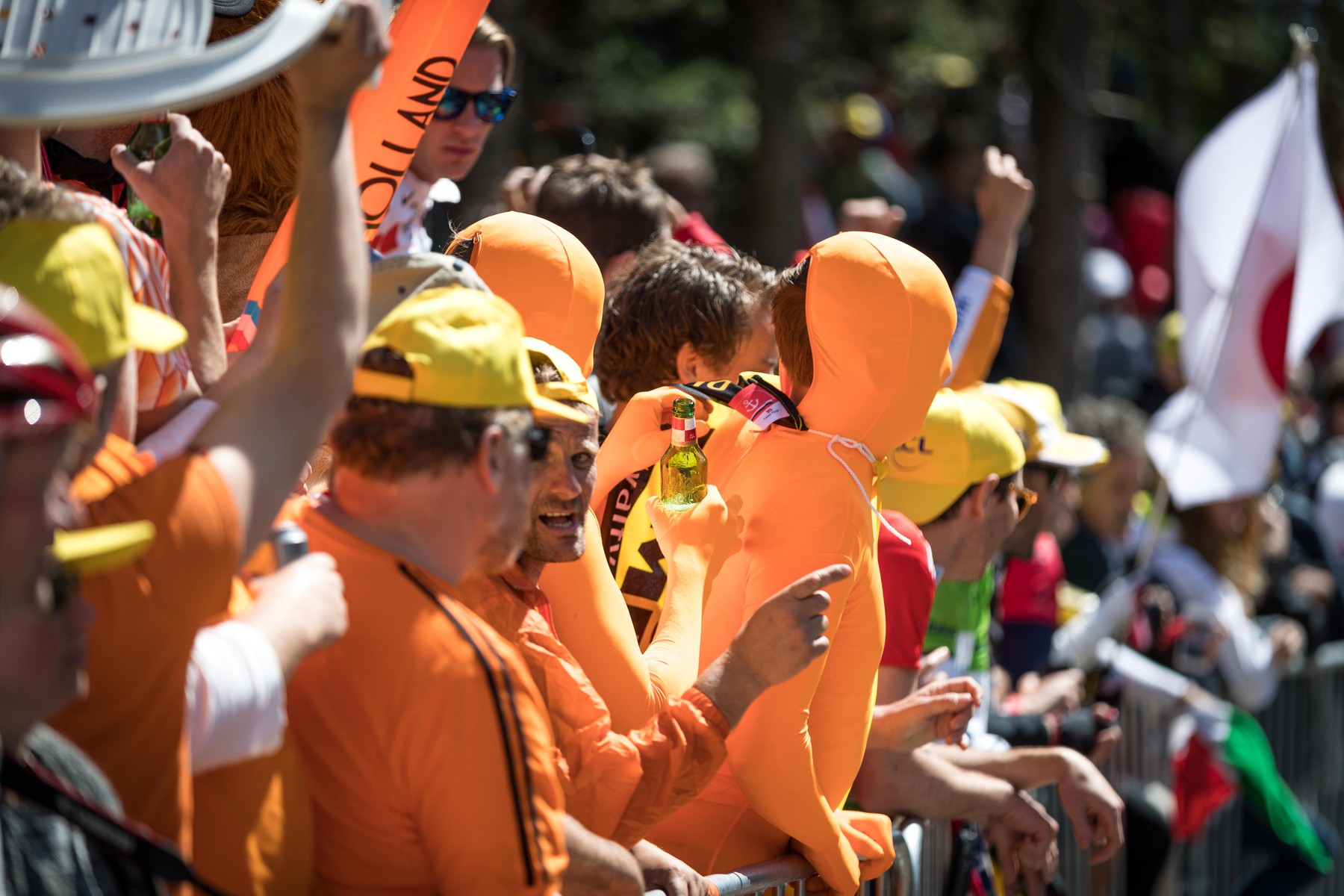 The key to your success in life lies in the ability to make use of the moment of surprise. You
make plans carefully and with the brilliancy of a poker player don’t show your intents till your personal triumph comes. When the time is right, you leave the dullness of the crowd and jump under the wheels of the approaching Vincenzo Nibali. It’s time to make the selfie of your life!

Spectating professional races is your true passion. You never miss a single stage of any big tour. You stand as close to the track as possible. However, you haven’t ridden a bike since you were seven. To you, cycling is a big show to be passively watched, just like the Dakar Rally.

You have a brand new camera, which can store infinite amount of data. The Tour is your chance to take the best photo ever – better than any picture by accredited professionals.

While some spectators limit their preparations to cooling a six-pack, others dedicate several days before the peloton even arrives to creating a warm welcome for them. Can anyone explain how long it took to make that cyclist in the field at Arc-et-Senans near Besancon, which was cut out using combine harvester and must have been visible from outer space?

All the Bored People

Let’s not forget the thousands, tens of thousands, hundreds of thousands, or maybe millions of you who stand along the track with glazed, blank looks, sacrificing yourselves for your loved ones who can’t think of better things to do during your family holiday than spectating the Tour de France.