Allen Shaw (43) is an Indian artist, illustrator and storyteller who decided to change his hometown of Munger for Berlin. […]

Allen Shaw (43) is an Indian artist, illustrator and storyteller who decided to change his hometown of Munger for Berlin. The graduate of the National Institute of Design in Ahmedabad has been fascinated by the “two-wheeled wonder” – as he refers to bicycles – since his childhood. In India, bikes are regarded as a means of transport for the poor, but when Allen came to Europe, he was surprised at how much joy bicycles bring to people of all sorts and ages. Allen himself is a great fan of cycling and apart from riding, he loves painting bikes with watercolours. That way he tries to show the enchantment of this wonderful machine to the general public.

Allen, why did you choose Berlin? Has it been a dream destination for you?

Well, when I moved to Germany almost nine years back, I landed up in Erlangen, quite a little town in South Germany. It took me a while to get used to the culture, which is quite different from my own. When I finally felt a little settled, my wife asked me if I would like to move to a bigger city like Berlin, Munich or Stuttgart. My answer was, “I have started liking Erlangen and have a few things going my way in Erlangen, but I do not want to die here!” So Berlin became an obvious option. I have lived here for almost four years, but I still have my ties with Erlangen. This year the Mayor of Erlangen decided to use one of my bicycle illustrations from Erlangen as his greeting card for 2017. 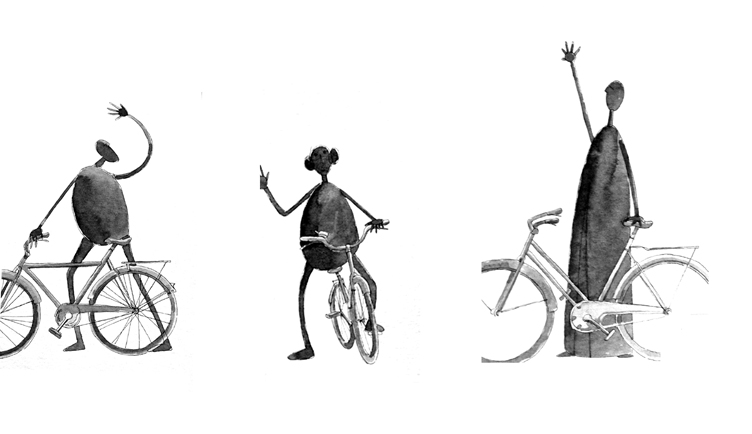 Why do you paint bikes?

I have been fascinated with the two-wheeled wonder since my childhood. I think it’s such a pretty subject to paint. I just love the form and I try to find as many stories around bicycles as possible. When I came to Europe, I got even more fascinated because of the bicycle culture here. I display my work at bicycle fairs and I am falling deeper and deeper in love with it with every passing year. Apart from that, I think in today’s context, it’s one of the most relevant means of transportation, and if I can spread this message through my work, I would be more than happy.

How much do you cycle in Berlin?

Apart from riding my bicycle in the city, I do at least two big bicycle trips a year. I started long-distance riding with a really interesting trip when I cycled from Passau in Germany to Linz in Austria, then to Český Krumlov in the Czech Republic and then back to Passau. The last three years, I have been cycling the islands in the Baltic Sea in Germany, so far I have done Usodom, Rügen and the half-island Fischland Darß Zingst. 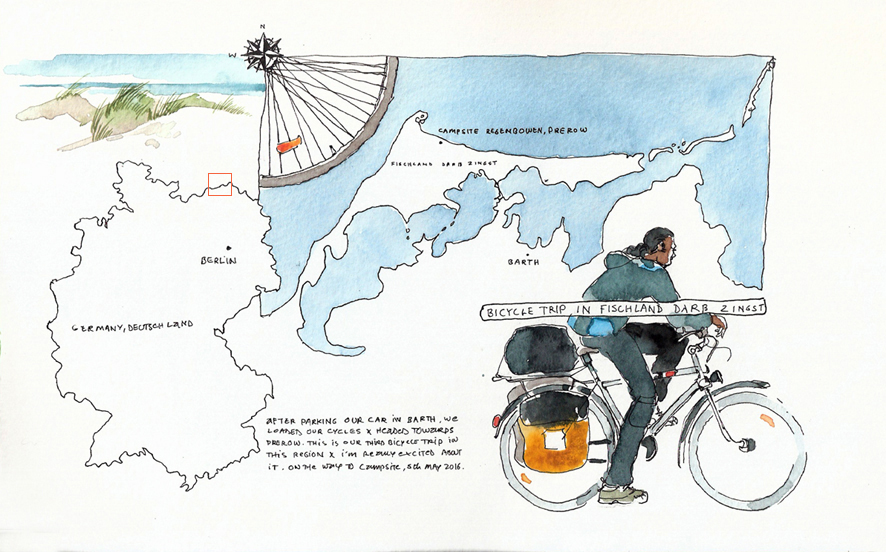 What kind of cycling experiences do you have compared with your home city, Munger?

Cycling is different in India. It’s not an established sport or an activity that people get into by choice, it’s more of a necessity, and it’s popular among the poor class for economic reasons. Usually, this aspect finds its way into my art. In December 2012, I did a 900km-long bicycle trip in India, from New Delhi to Udaipur. This was the most fascinating trip for me as I got to see my country from another perspective and I also realised how beautiful Indian people are. On this trip, I spotted this vegetable vendor carrying his entire shop on a bicycle, and one of the bundles looked almost like a big broken heart. The sharp contrast between my fun & adventure trip and his necessity was something that has remained in my head. Last year I painted him, the painting is called “Dilwale Chacha”, which can be roughly translated as “the uncle with the heart”.

Can you describe your bike to us?

I own a Pedersen, also called the Dursley Pedersen bicycle. It’s my love, a bike which was originally designed in 1893. The special thing about a Pedersen is that it has a hammock-style saddle and the structure of the frame is inspired by Whipple-Murphy bridge truss. I just love the way it feels when you ride it, needless to say, it draws a lot of attention. I was lucky enough to find a second-hand one and I had to spend a lot of money to get it into shape, but it’s worth every penny. It’s also the subject of a lot of my artworks.

Bicycle Art: Guy Puts Us All to Shame with Just His Index Finger

Bike Scraps Turned Into Art: Check Out These Amazing Chandeliers!