No matter the weather, Jakub Hokynář rides a heavy cargo bike whenever he’s got free time after school. Dressed in a thick windproof jacket, he brings express deliveries from sellers to the customers in downtown Prague where car traffic is limited either by restrictions or simply by another afternoon rush-hour congestion. Eighteen-year-old student of an aeronautical school is working for the Messenger company that joined the CityChangerCargoBike project focused on spreading the cargo bike delivery idea across European cities.

“The navigation app in my smartphone notified me I did over 2,500 kilometres in the last twelve months just on the cargo bike,” Jakub says. He’s taking duties about three times a week, picking up the cargo bike at the company’s yard after school is over for the day. Guided by the team dispatcher, he’s delivering goods to the customers around the city. Depending on the orders, he makes about 40 km a day after school or up to 80 km during his school holidays when he can get on the bike earlier in the morning. 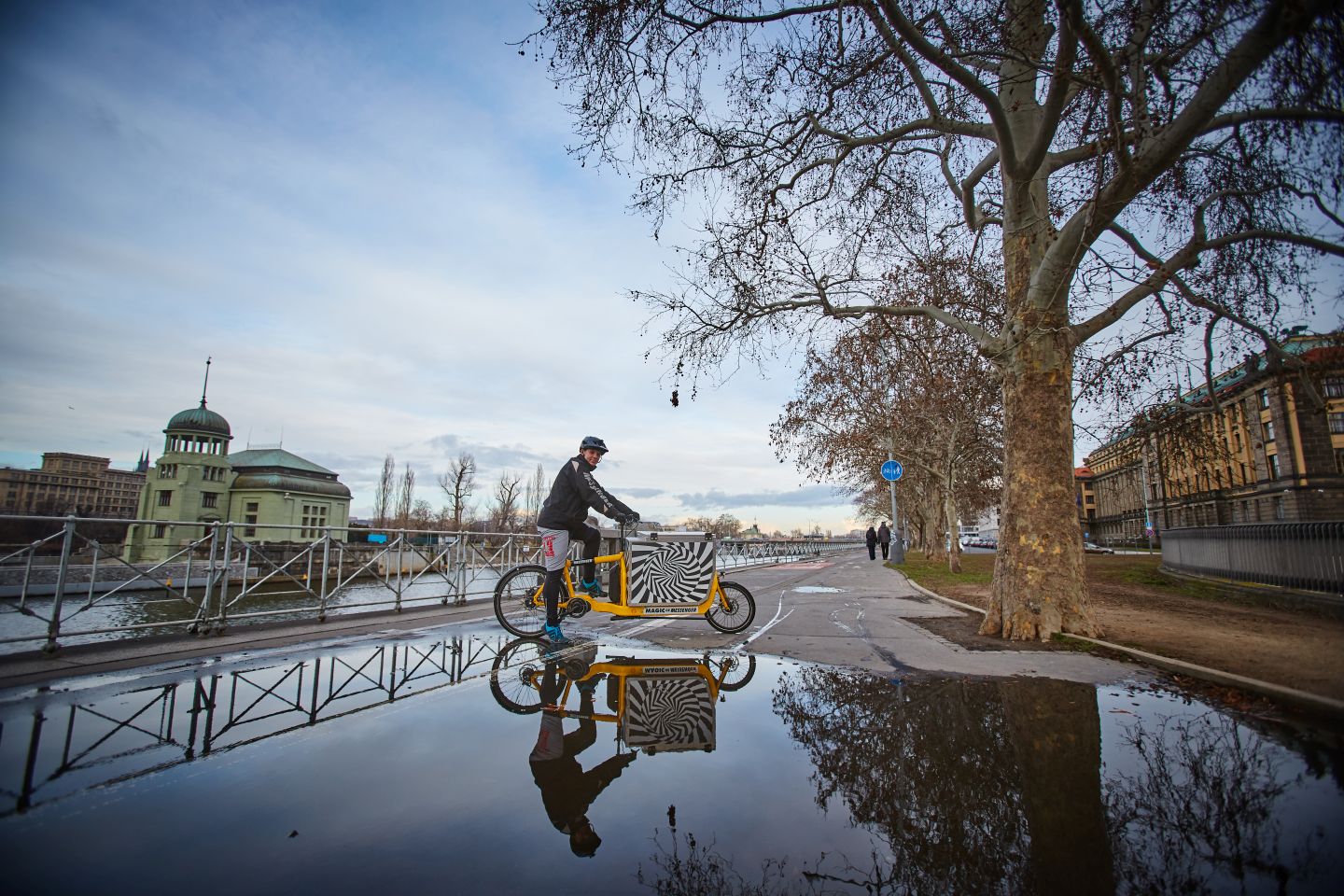 The initiating experience with the long and chubby cargo bike was everything but enjoyable. “The steering felt incredibly strange and the stability was far from what I had expected. I even crashed a couple of times,” says Jakub who ended on the ground after losing balance while turning or when his front wheel got stuck between tram tracks at a junction. After weeks of daily exercises, however, he got used to the unusual feeling and now can switch from his own MTB as easily as from one pair of shoes to another.

The yellow Bullit Cargo bike was manufactured in Denmark by the Larry Harry company. It consists of an aluminium frame, chromoly steel fork, common bicycle parts and an electric motor drive powered by a big battery. “With the battery fully charged, I can do 80 km on average. Only once it happed that the battery run out and I had to use my own power to get back to the base. As the cargo bike weights three times more than my usual bike, it was a really tough job,” Jakub says. Unlike sporty cyclists, he didn’t have a good experience with rationing nutrients and therefore he prefers eating in fast food establishments. 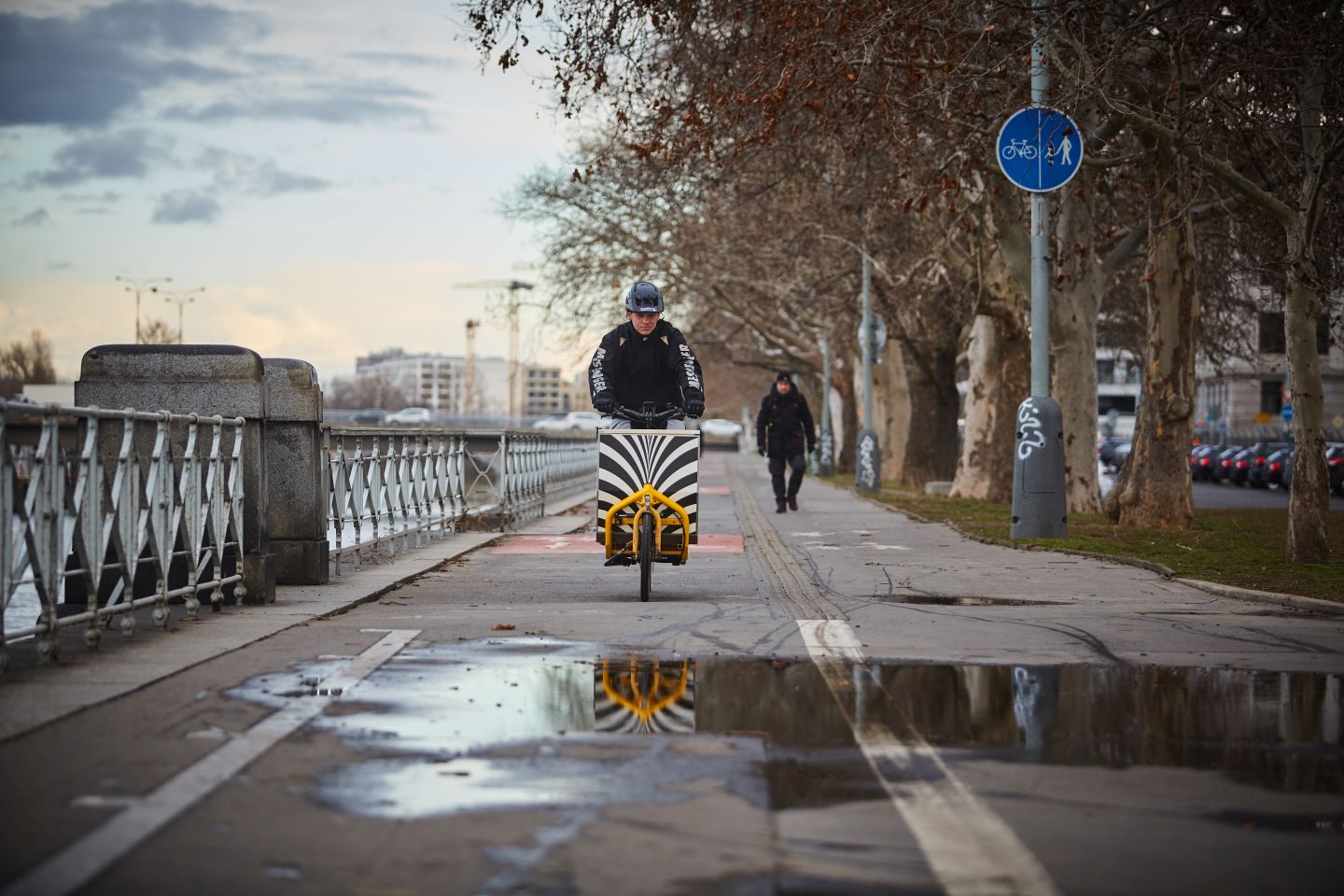 Ten iPhones X in the box

The big aluminium box of the bike he uses accommodates as many as four big bags or eight parcels. While the most expensive delivery included 10 brand new iPhones X picked up at a major electronics store in Prague, the most precarious ride of his career was when the customer ordered four boxes of luxury wine, each containing six bottles. “I really made an effort not to crash or hit a bump on the route that day,” Jakub recalls. Beside electronics intended for express deliveries, the most common goods are shipments by the official postal service or by flower vendors. “People ask me about any unusual or funny orders but I didn’t have any pets, guns or quickly melting ice cream yet,” Jakub says.

Despite larger dimensions because of the box, most drivers are tolerant and have no problem with a cargo bike in the streets – with one exemption: the cabbies. “I don’t mean to say that everybody driving a cab is rude but some of them leave no more than a 15-centimetre space between the bike and the car while overtaking me. But I don’t care. I love my job and will do it as long as I can.”

Overcoming Polio Through the Sheer Power of Will and Cycling