Until recently, Prague was a nightmare for cyclists. There were too few bike lanes and the cobblestone streets, tram tracks, […]

Until recently, Prague was a nightmare for cyclists. There were too few bike lanes and the cobblestone streets, tram tracks, and traffic congestion made the city a minefield for bike riders. The situation has improved in the last five years, as the city expanded its bike path network, adding many roadside lanes that made cycling safer and raised the awareness of drivers to the presence of bicycles on the streets of the city.

Prague currently boasts some 515 cycling routes, covering more than 125 km. But the Czech capital is trying to move up to the next cycling level by using technology to plan future bicycle and pedestrian lanes in order to more efficiently allocate future investments for non-motorized transport.

The technology consists, as of now, of a single 2m-high pole that will collect and display real-time data on the numbers of pedestrians and cyclists that pass by, and it will collate this data with the time of the day and temperature. The pole is located along a very popular cycling and hiking route on a bank of the Vltava River, about 4 km from the city centre.

The measurements provide information about what effects the time, weather, and season have on the number of cyclists and pedestrians in their respective lanes. No personal data is collected or stored. The data is gathered via an imaging device linked to a nearby counter. Cyclists are recorded by induction loops embedded in the surface of the bike lane. Pedestrians are counted with a thermal sensor.

According to Prague’s Deputy Mayor Petr Dolinek, quoted on the City Hall website, “measuring the intensity of non-motorized transport allows us to better evaluate investments in urban infrastructure, urban mobility, and other projects. Thanks to these data, we will know which places are the most utilized, and where it will be necessary to renovate more frequently, renew traffic signs, and build bicycle racks and other infrastructure.” 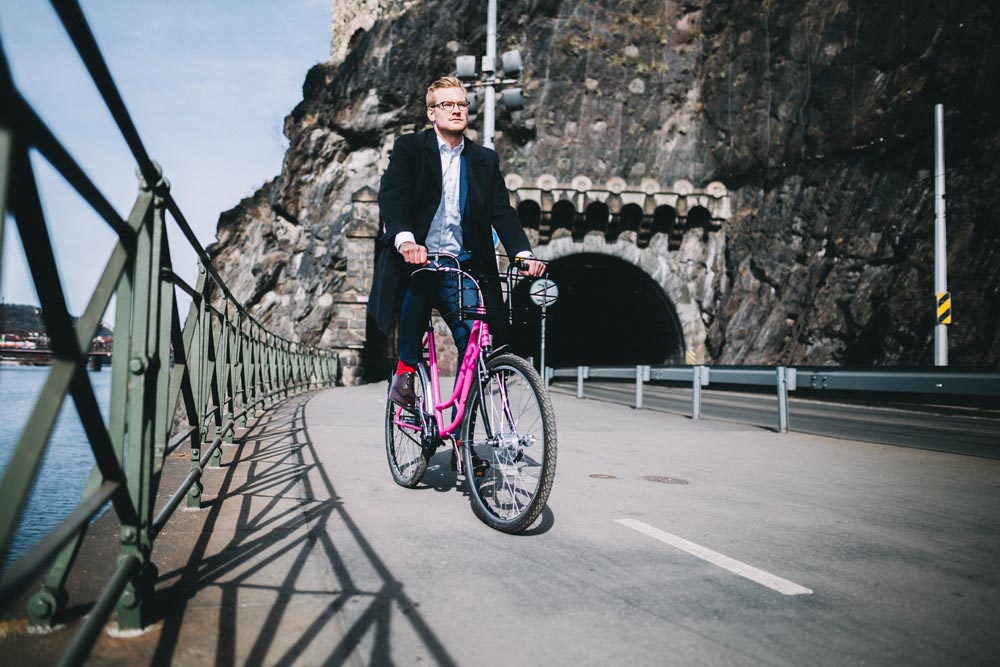 The measured data will be available online on two websites, including that of the City Hall. The number of cyclists per day and per year, according to the direction of travel, will be updated every fifteen minutes. The pole was launched as a part of European Mobility Week, which took place from September 16 to 22, to highlight the advantages of environmentally-friendly modes of transport.

Prague City Hall is also investing some 100 million Czech crowns (about €3.87 million) in the construction of new bike lanes and the renovation of the existing network in 2018, more than double than any previous year. Part of that money is being used on a campaign to educate the public on the rules of the road, for drivers, cyclists and pedestrians, so that they can all coexist more safely.

The aim of all this activity is to increase the use of bicycles in the city and thereby reduce the number of cars on its often congested streets and, consequently, also reduce greenhouse gas emissions and encourage people to exercise more. Ironically, the Prague 1 district, where the City Hall is located, has banned bikes during the day from certain parts of the historical centre, which is usually crowded with tourists. A court will eventually decide whether the ban is permissible.

Unlike most other European cities, Prague’s project to upgrade and expand its bike lane network is not part of a broader, long-term attempt to reduce car ownership – not yet.

In the Czech Republic, the automobile remains a powerful symbol of the Velvet Revolution, which in 1989 overthrew the Communist regime that had ruled the then Czechoslovakia for 40 years. Under the Communists, cars were ugly and cheap as well as something of a luxury, since prospective car owners were put on a waiting list and often had to wait years before being allowed to purchase one.

Today, the number of luxury cars and stylish SUVs on Prague’s streets seems to be growing every year. Most Czechs today would almost certainly not consider giving up their comfort in the interest of cleaner air – or for any other reason. But the current generation of young adults may have different priorities. Like their peers in other European countries, many of them are environmentally conscious. So, perhaps this modest initiative to boost the use of bicycles can be regarded as the beginning of a more ambitious plan. One that will follow in the near future.