PANG KLANG YEEHAAAAA in other words: I’M BACK! Recharged, rested, motivated, happy! Wild awake! Two weeks of non-stop camping, vast empty landscapes of steppe and desert, away from ‘civilization’, sun on my face and a book instead of my laptop; that turned out to be the recipe to regain my power, my pill.

After Bishop, where I wrote my last blog, I left the Sierra Nevada. While I descended into the valley at the east I could see how the Sierra mountains came to an end in the distance. Those first pale rays of sunlight in Bishop were a forecast of what was to come.

Every day now that ends cloudless I roll out my matrass under the naked sky.

The steppe lay stretched out before me in the wide valley, with a view as far as my eye could see. Wilderness again, at last, but totally different from the wilderness I’ve seen in Alaska.

The sun sets while I feed the campfire. And when it starts getting real chilly I crawl into my warm sleeping bag in the company of ‘de Passievrucht’, a book in my native language, Dutch. The sky naked and me in my warmest clothes wrapped up in my down sleeping bag closed up tight above my shoulders. Cause even though the sun warms my bare legs during the day, the temperature still plummets below freezing in the nights and I wake up every morning with a layer of frost on my sleeping bag and ice in my water bottles. Every morning I see how the sun colors the sky yellow and orange from my bed, thereafter the first rays of sunlight hit the mountains, only to move on bit by bit, pushing back the shadows, to finally find me. With ice cold hands I cook breakfast whilst still in my sleeping bag. As I pack my things to load my bike and during the first miles of riding I lose the layers of clothes piece by piece.

THE SUN IS AMAZING! 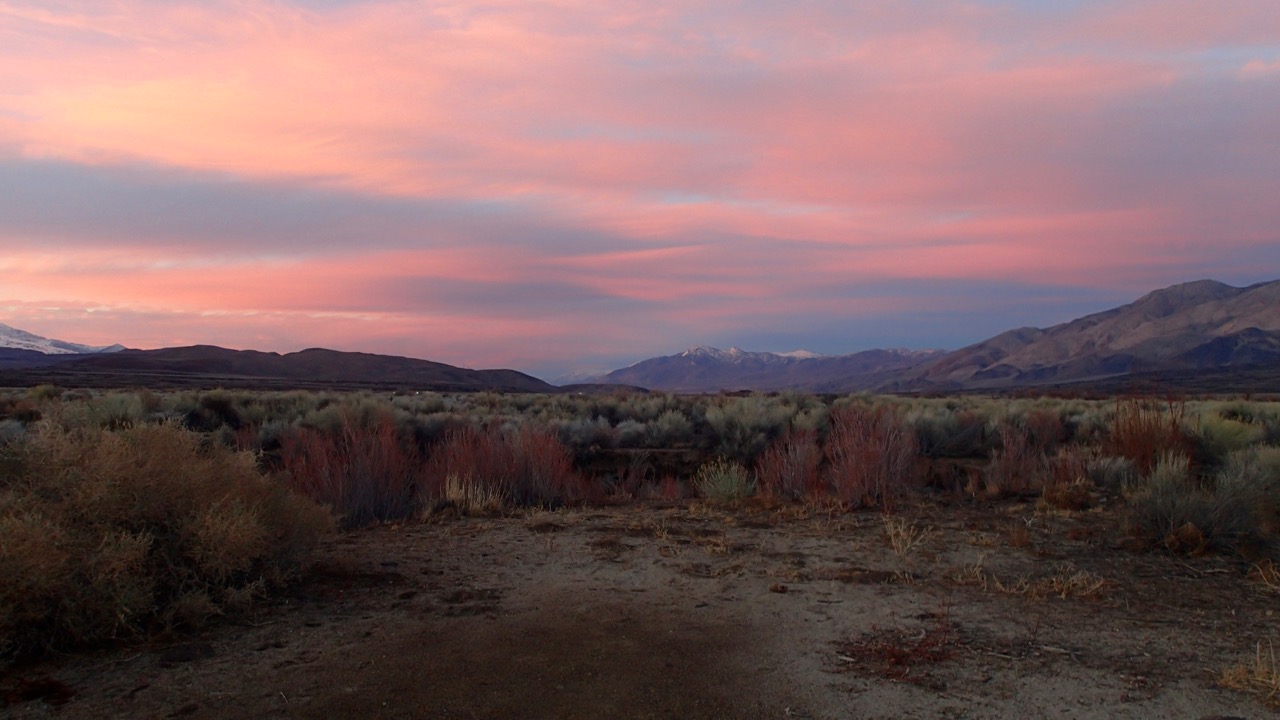 Within several days I went from empty, tired and overstimulated (‘You don’t need to be happy at all, to be happy you’re alive.’ A quote from my favorite musical ‘Next to Normal’.) to intensely happy and coming home in the wide open space of the desert and to the company of the sun, the moon and stars.

Ever since the first time I experienced the vast empty landscape of steppe and desert, in Russia and central Asia, I’ve known that those are places where I can unwind and find myself again. A place that reflects the space that I need in my heart and head. In my heart to make room for new impressions and encounters and in my head to process all that.

The desert reflects the space that I need in my heart and head to travel.

To reach the lowest point in North America I had to climb two more passes after leaving the Sierras. Long steady climbs, just the way I like them. As I reached the top of the second pass Death Valley lay stretched out far beneath me, the descent a long straight road all the way to the valley at sea level. Two days later I reached the lowest point of North America, 86 meters below sea level, on the salt flats of (once a lake) Badwater.

Recharged by the sun and back on my feet after my own low I was told that a winter storm would hit Death Valley (the second driest place in North America). Two days long a ferocious wind blew through the valley and a light but steady rainfall turned Death Valley into Wet Valley. Different then predicts after those two days the sky cleared and within a few more days it was clear blue again with a white bright sun. 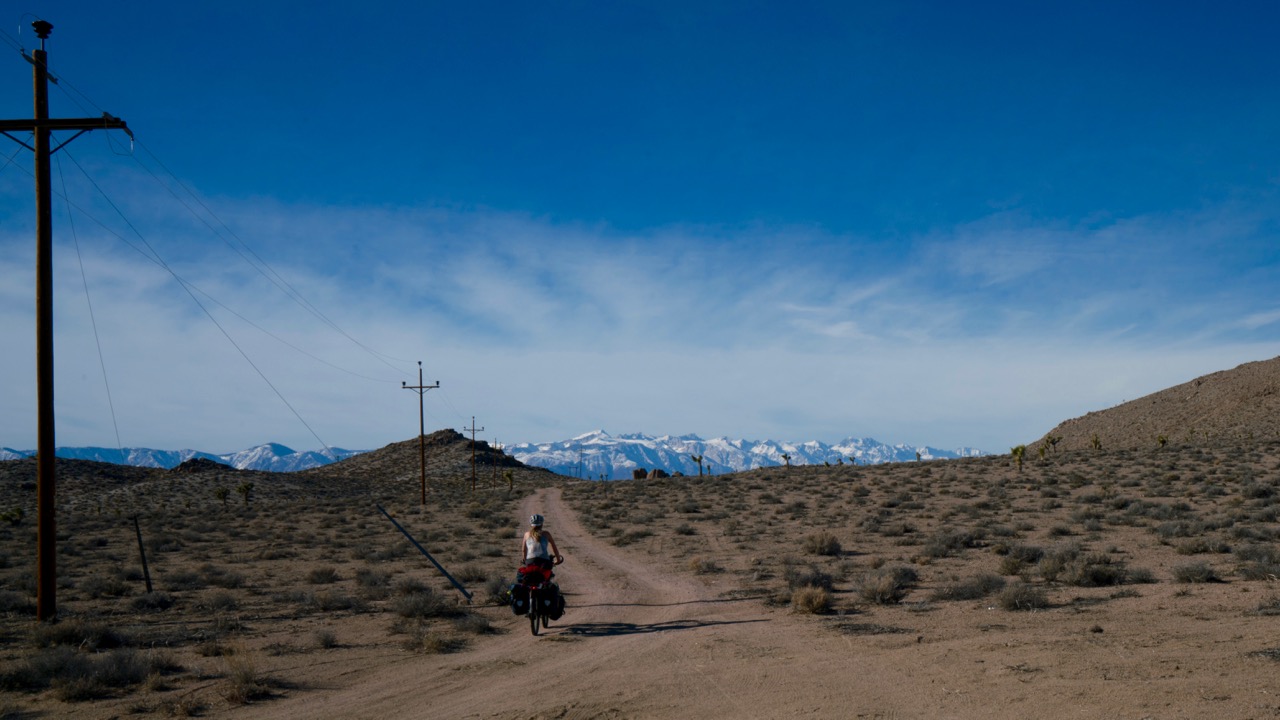 I cycled from the desert of Death Valley into the Mojave desert, with only the town of Baker halfway in between the two parks as a sign of civilization. A town existing of at least 50 fast food restaurants, no houses and a poorly stocked grocery store.
Just a quick reminder that I was still in the United States.

Arriving to the desert all of a sudden it’s important to figure out where to refill the water supply. Where once I could trust there to be civilization, streams, lakes or even just puddles of rainwater, now I have to do research and ask around to make sure I can get some water on the way and whether the water coming from the tap will be sweet or salty, if even there is a tap. 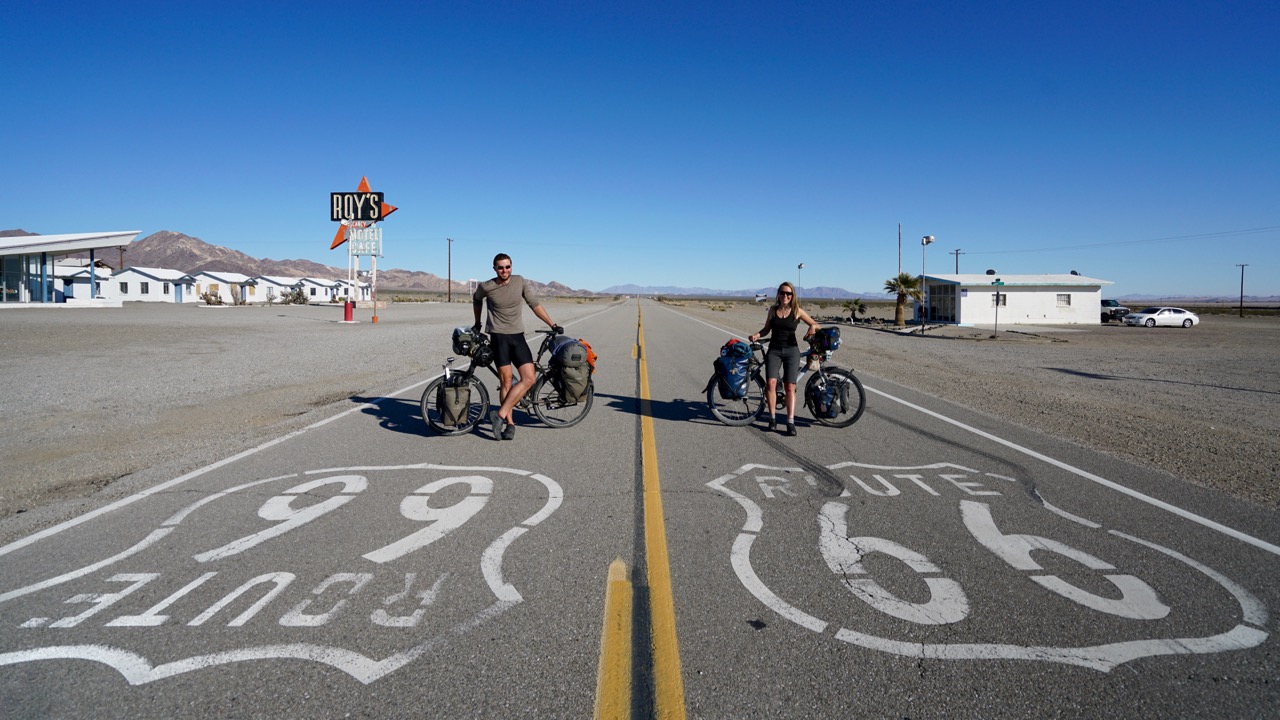 South of the Mojave Preserve I unexpectedly hit a part of the famous Route 66, where at the only gas station along my route the tap water was salty. Thanks to a helpful car driver, I still left the place with refilled bottles of sweet water, enough for that afternoon and the next day. For cooking I could use the salty water without a problem.

After crossing another pass I rolled into Wonder Valley, an unexpectedly inhabited valley. That is, lots of houses but hardly any people. But the further I cycled into the valley the more life I saw around me. I wondered: ‘Who lives here?’. Who chooses to live in such a dry hot desert valley, away from the ‘rest of the world’? As I refreshed myself at the water dispenser in the community center of Wonder Valley and spoke to the young guy who runs the place, the answer to my question walked in the door in the form of a wild eyed man in worn out camouflage clothing (plus minus 70 years of age) and an Afro American transvestite (plus minus 35), with a headlight on, whom he introduced as his wife. She came in to report, in an angry voice, that her neighbor had taken one feet of her property (something that sounded slightly dramatic to me, seen the fact that if there is one thing where there’s more than enough of in the valley, it’s unmanaged land). I pitied the young warden who just moved to the valley and started his job at the center and was now forced in a role that he might not have signed up for. 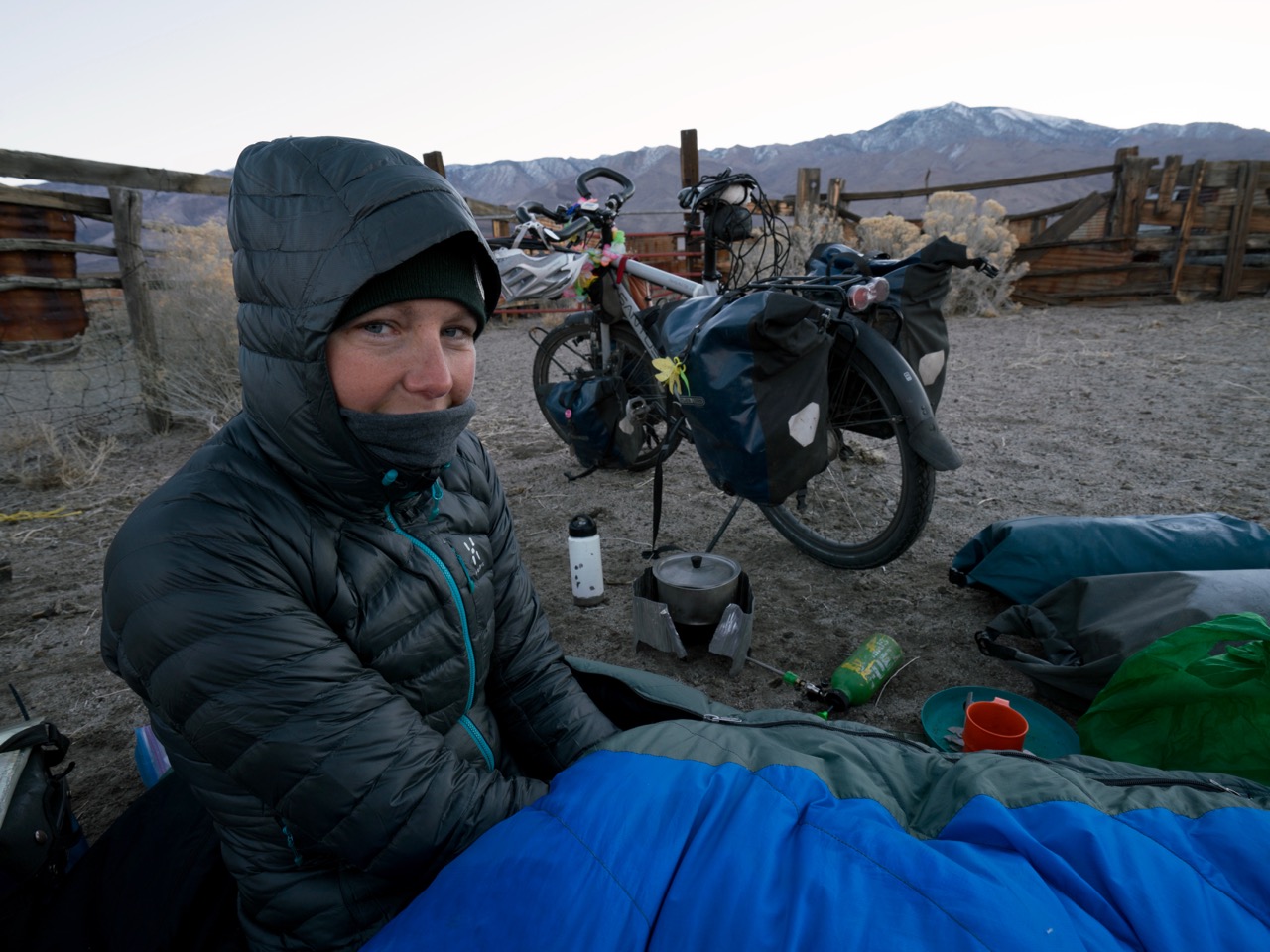 I bet the residents of Wonder Valley are just as diverse everywhere else, but the need for isolation or solitude, for whatever reason, seems to be the common factor. That also goes for David, with who I am a staying for two days through WarmShowers now. He’s done with normality. Born and raised in New York he moved to the Californian desert six years ago. He’s got a big piece of land here where he can live exactly the way he wants. For example; continuously have travelling guests staying at his place, doing building projects like at this very moment; building a yurt, and most important, preferably all of that naked. And because this is his own property the neighbors are sufficiently far away to not be disturbed by it. He gave us a tour through the valley to show us some eccentric building and visit the Noah Purifoy Outdoor Museum with art made out of ‘junk’.

Here I’m at the edge of Joshua Tree National Park, known as a great rock climbing and bouldering (climbing up to 5 meters without a rope) location. I purchased a pair of second hand climbing shoes in Bishop and hope to clamber up a few boulders with Shaun here in the next few days.

With only ten days left on my USA visa, Mexico gets excitingly close.

A life on the bike is day after day so filled with new impressions and unexpected turns that three days is the maximum time I can think ahead, everything after that feels out of range.
When I stop and think about the fact that I’ll be crossing into Mexico in maximum ten days from now I get a little nervous. Should I be preparing for that? But what is there to prepare? Instead I have lots of plans for my last one and a half week in the States; climbing in Joshua Tree, cycling along the Salton Sea and paying a visit to Slab City and walk up Salvation Mountain.

After that I’ll wave my bike buddy Shaun goodbye as our ways will part. The adventure called ‘Mexico’ is for me alone to start. And I’m looking forward to it.
A new language (I don’t speak Spanish), a new culture, a new country. It makes me a little nervous, but mainly excited. When I write my next blog the Latin American adventure will have started. What a wonderful prospect! 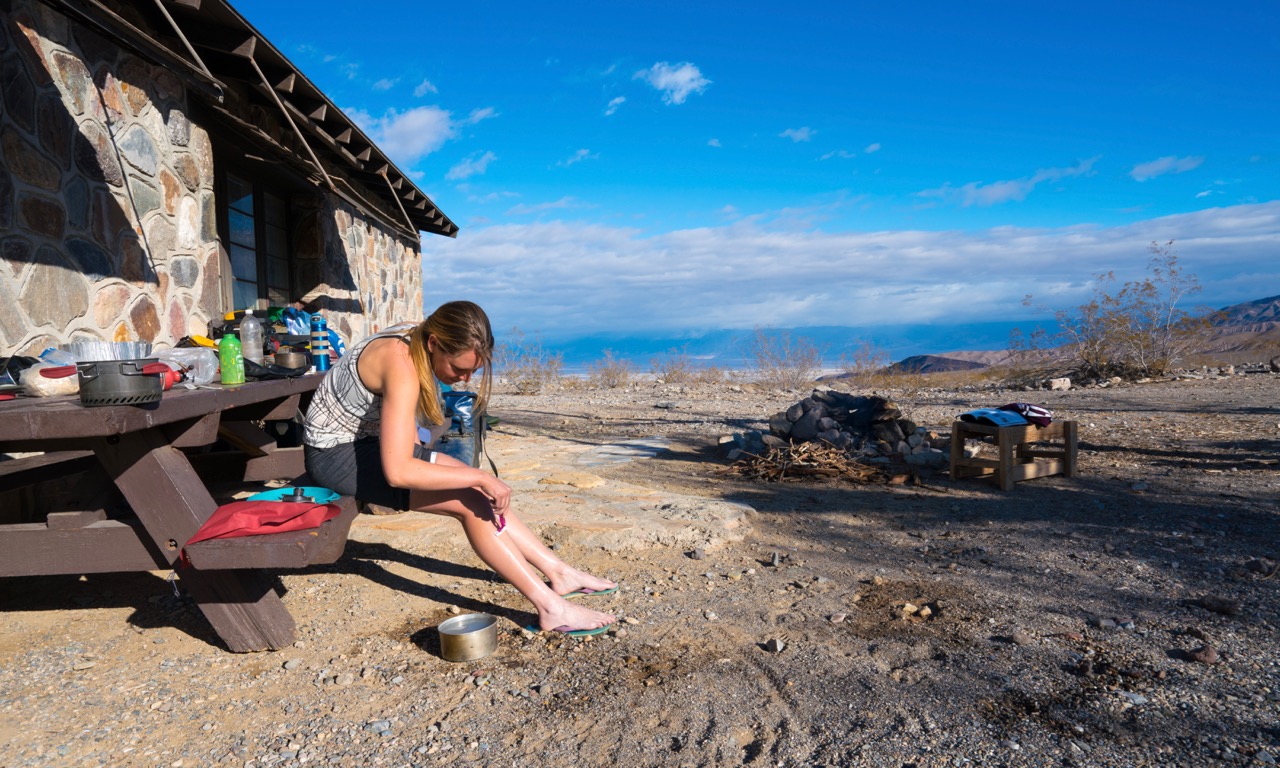 Travelling the World with Hera van Willick: 6 Months on the Road