You’ve probably already heard about Robert, the 105-year-old cycling miracle from France, who recently managed to best his own record of furthest distance (22.547 km) cycled in one hour in the 105+ category. Both 100+ and 105+ rider categories were created by UCI especially for Marchand and, not surprisingly, he dominates them both. If you feel that you’ve just been challenged by a guy clocking over ten decades, prepare to take another blow – his life is even more interesting.

Born on November 26, 1911 (even writing this seems surreal), in the northern French city of Amiens, he started riding when he was 14 but, due to his diminutive stature, his coach told him that he should give up cycling because he will never achieve anything on a bike. At first, he took his advice to heart and started living an eventful life that took him to Venezuela, where he worked as a truck driver and sugarcane planter near the end of the 1940s, and later he moved to Canada where he worked as a lumberjack. 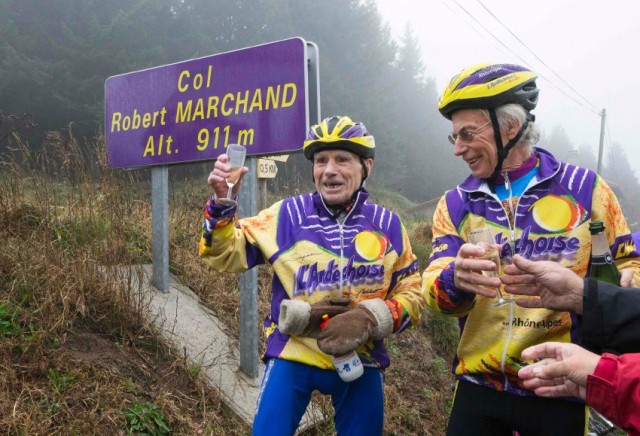 Furthermore, because it apparently wasn’t enough, he was a firefighter in the 1930s and took an active part during the strikes of 1936 in France that gave birth to the modern era foundations of French employment legislation and he even managed to find himself in prison during World War II because he failed to train children of Nazi collaborators as a gym instructor.

He returned to France in 1960s and made living through various odd jobs, later taking on the job as a gardener or wine dealer until 1987. Then he apparently remembered his old hobby and took up the bike again when he was 67 years old, because why not. When he was 89 he finished the 600-kilometre race between Bordeaux and Paris in 36 hours. Actually, he rode from Bordeaux to Paris, and Paris to Roubaix several times. He also cycled to Moscow from Paris in 1992. Whew. 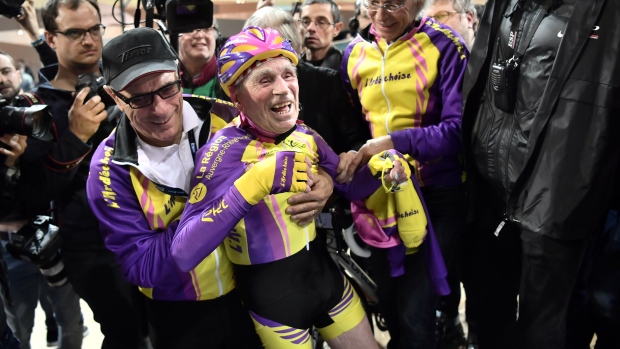 He set his first hour record to mark his 100th birthday. In 2012 he rode 24 kilometres and 251 metres in Aigle. Two years later he rode 10 per cent faster than he did when he was 100 years old. This veteran Frenchman who apparently doesn’t know the definition of “retirement” also holds the record for 100-kilometres in his age group. On the track in Lyon he finished his 100 kilometre race in four hours and 15 minutes, averaging just over 23 kilometres per hour.

Not so fast forward to January 4, 2017, and here comes his successful attempt at breaking his own record. When asked about his motives, he simply answered: “I’m not here to break any record,” he said. “I’m doing it to prove that at 105 years old you can still ride a bike.” But his competitive spirit wasn’t entirely left behind, as he noted: “I did not see the sign warning me I had 10 minutes left,” Marchand said after his effort. “Otherwise I would have gone faster, I would have posted a better time. I’m now waiting for a rival.” No, he doesn’t put us all to shame at all.

According to his coach, he stays fit by no complicated means – he has a stabile sleeping routine, exercises daily both outdoors and indoors, eats a lot of fruit and vegetables, avoids smoking a has only the occasional glass of red wine. Yeah, not something we all like to hear, but it all boils down to that. And when asked about doping, Robert just laughs and says that you would find only a little drop of honey in his water bottle. His trainer Mistler confirms that: “If he had been doping, he would not be here anymore.”

What a role model for all of us to look up to. Robert Marchand is certainly winning at the whole life game and we can’t wait what he will be up to next. The Unbelievable Journey of Alessandro Zanardi: From F1 to Paralympic Gold