What if carbohydrates are not the best fuel? What if it’s actually fat that’s always been the superior choice? In the second part of the fat adapted cyclist series you will learn how the human body replenishes energy and why fat is our preferred fuel for endurance.

The human body produces energy by converting food into ATP (adenosine triphosphate) and then breaking it down to ADP (adenosine diphosphate) and P (phosphate). There are three ways the body replenishes ATP, depending on the level of exercise intensity. First, when we exercise for longer than two minutes, the oxidative or aerobic energy system is used. When oxygen is available, the body uses fats and carbohydrates (or proteins if necessary) to synthesize ATP. The proportion of fat burned is higher at low intensities, and also when the athlete is fat adapted. Second, for intense efforts lasting under two minutes, the glycolytic or anaerobic system is used. The body breaks down glucose in muscles, or glycogen in the liver, into pyruvate for immediate energy, with lactic acid as a byproduct. Third, for maximum intensity efforts lasting 3 to 30 seconds, the phosphagen energy system is used. The body breaks down ADP further into AMP (adenosine monophosphate) and Pi (inorganic Phosphate). It then combines the Pi with the amino acid creatine and ADP to create more ATP.

As you can see, when it comes to short intense efforts (imagine Peter Sagan sprinting to the finish line), it’s all about glucose. Fats come into play in lower intensities when we have enough oxygen and when we need a sustained output for a longer period of time (imagine Chris Froome winning the Tour De France after 89 hours of work).

We have vastly more energy stored as fat than as carbohydrate

Now that we understand how the human body makes energy, let’s see how much of it we carry around with us. Let’s take an example of a trained male cyclist weighing 65kg (145 pounds) and having about 10% body fat. His body energy stores translate into 50,000 kcal of fat and about 2000 kcal of carbohydrate (glucose and glycogen).

If we consider a rate of 800 kcal burned per hour of cycling and an average speed of 32 km/h, then we can theoretically say that: He could ride roughly 2000 km on his fat reserves but only about 80 km using his stored carbohydrates.

Metabolic superiority of using fats as a fuel

So while the body’s glycogen stores are fairly limited, fat stores are near inexhaustible for most endurance events. With proper training we can teach our body to use a higher proportion of fat in medium and even higher intensities. Studies show that being in a state where carbohydrates are not readily available vastly enhances lipolysis (fat burning efficiency), aerobic capacity and muscular endurance. That way we might be able to reduce our dependence on carbohydrate (dietary and stored) and prevent bonking during a race. 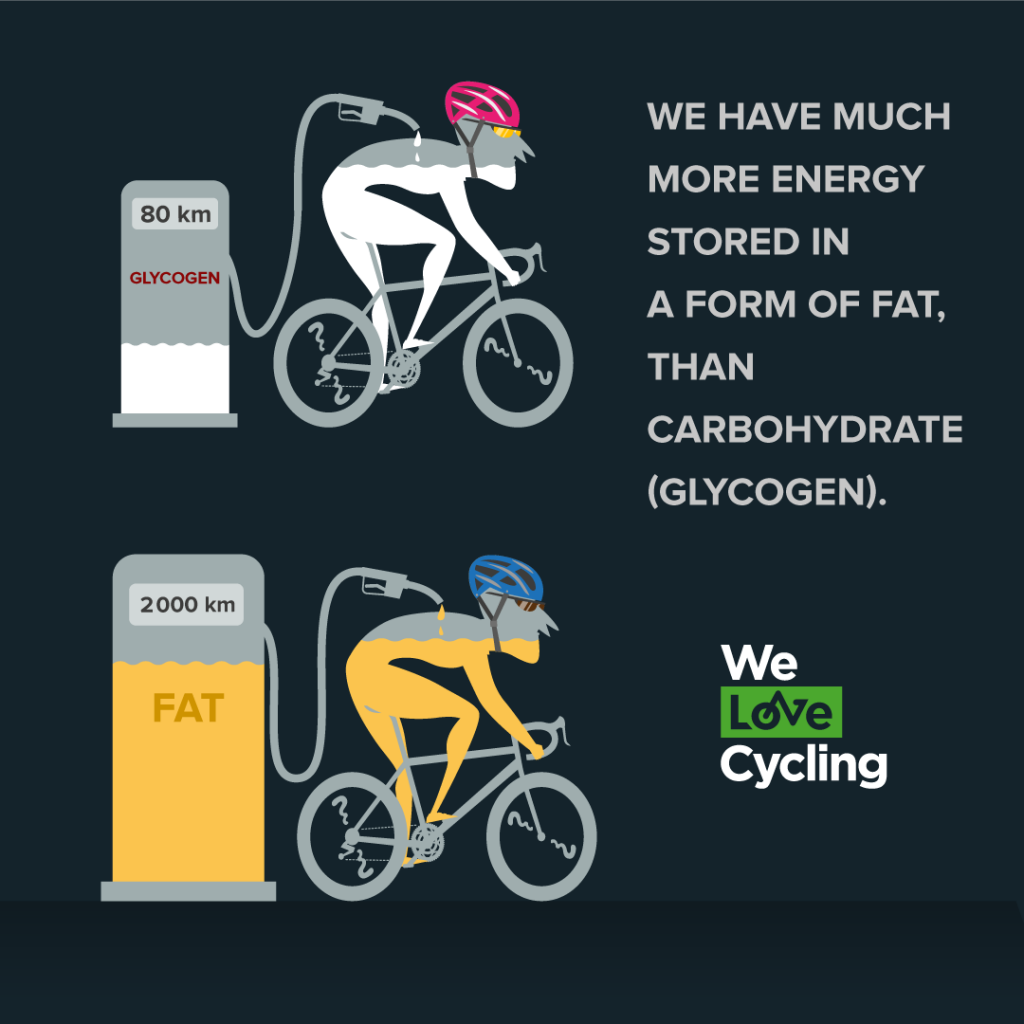 A Diet Goal for the Off-Season: Become a Fat-Adapted Cyclist

BLOG: What Is the Best Cycling Soundtrack? We Aim to Find Out!

Meet the World’s Most Expensive Saddle!