Are These the Best Cycling Jokes?

Do you want to relax and have a few laughs? We compiled the best cycling jokes  just to make that […]

Do you want to relax and have a few laughs? We compiled the best cycling jokes  just to make that happen. So sit back and enjoy the ride… 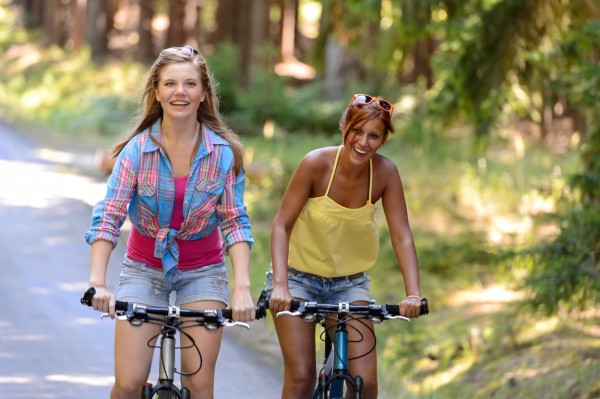 The one with the wife

On Saturday morning, a roadie gets up early, as he has for so many Saturday morning rides, and softly slips out of the bedroom. He dresses quietly in the next room, grabs his helmet and water bottle, and goes out to pump the tires. As the garage door opens, he’s confronted by an icy, windswept rain.

He’s ridden before in these conditions. He doesn’t like it, but when it’s Saturday morning he never misses. He ponders the dismal conditions and then retreats to the kitchen to tune a small TV to the Weather Channel. The forecast only sounds worse. This is one Saturday when he just can’t summon the determination. With a sigh, he slips off his shoes, quietly returns to the bedroom, undresses and slips back into bed.

There he cuddles up to his wife’s back and whispers: “The weather out there is terrible.”

To which she sleepily replies: “Can you believe my husband went riding in that crap?”

The one with the God

An over zealous traffic cop stopped the vicar on his bicycle. After checking the bike thoroughly and finding nothing wrong he had to let the vicar go: “You will never arrest me because God is with me wherever I go,” said the vicar. “Right then,” said the cop. “I’m nicking you for carrying a passenger on a single seater vehicle!”

The one with the driver

A pedestrian stepped off the kerb into the road without looking and got knocked down by a passing cyclist. “You were lucky,” said the cyclist. “What are you on about! That really hurt!” screamed the pedestrian “Well, I usually drive a bus!” the cyclist replied. 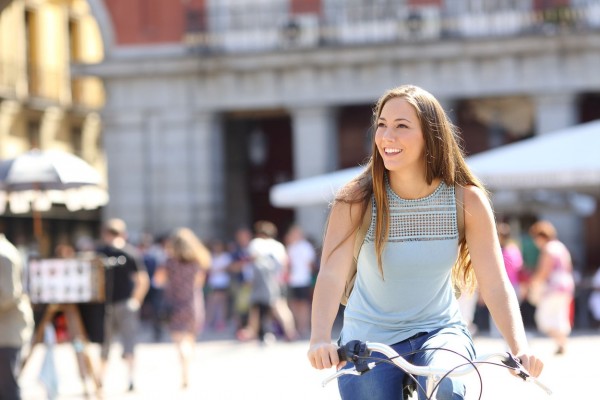 The one with the beautiful woman

“It was the oddest thing. This beautiful woman rode it up to me. She got off, took off all her clothes and said ‘Take whatever you want.'”

“Good choice,” says the friend. “The clothes probably wouldn’t have fit you anyway.”

The one with the brake

An experienced tandem captain takes a newbie friend out for a ride. He sets up the bike for him, explains the drag brake, how to climb without standing and so on. They’re having a blast and the captain is pleased with the stoker’s strength – until they hit the first big hill.

At the top of a particularly steep ascent, the captain, now sweating bullets, yells back to to his stoker: “Man, I must be out of shape! That hill has never seemed that hard before!”

And the stoker shakily replies: “Yeah… I think we would’ve slid right back down if I hadn’t had the brake on the whole way.”

The one with the nuns

Two Nuns were riding from Paris towards Roubaix. The Nun on the back seat said: “I’ve never come this way before!” The other one grimmed and replied: “Must be the cobble stones!” 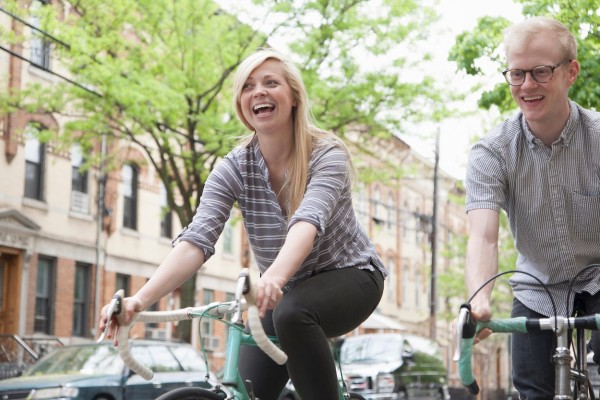 The one with the smuggler

A man on a bike, carrying two sacks on his shoulders, was stopped by a guard while crossing the US-Mexican border. “What’s in the bags?” asked the guard. “Sand,” the cyclist replied. “Get them off. We need to take a look.” The guard emptied the bags and found out they contained nothing but sand. The man reloaded his bags and continued across the border. A week later, the same man was crossing again with two more bags. The guard demanded to see them, and again they contained nothing but sand. This continued every week for six months, until one day the cyclist failed to appear. A few weeks later, that same guard ran into the cyclist in the city.

“Hey, where have you been?” the guard asked. “You sure had us wondering! We knew you were smuggling something across the border. So tell me and I won’t say a word. What was it?” The man smiled and told him the truth: “Bicycles!”

The one with the drink

A piece of motorway and piece of dual carriage way are enjoying a drink in the pub. A piece of red tarmac walks in. The bit of motorway whispers: “Come on let’s drink up and go before the trouble starts. He’s a bit of a cyclepath!”

The one with the bell

A tired cyclist stuck his thumb out for a lift. Nobody stopped for 3 hours. Finally, a guy in a sports car pulled over and offered him a ride. But the bike wouldn’t fit in the car. The driver got some rope out of the trunk and tied it to its bumper. He tied the other end to the bike and told the rider: “If I go too fast, ring your bell and I’ll slow down.”

Everything went well until another sports car blew past them. The driver forgot all about the cyclist and put his foot down. A short distance down the road, they hammered through a speed trap. The cop with the radar gun called ahead that he saw 2 sports cars flew past at over 150 mph. He then relayed: “…and you’re not going to believe this, but there’s a cyclist behind them ringing his bell to pass!”.

Still not laughing enough? Check out our compilation of the best cycling GIFs!

Bradley Wiggins: “Sprinting Must Change. It Could Learn from Athletics.”