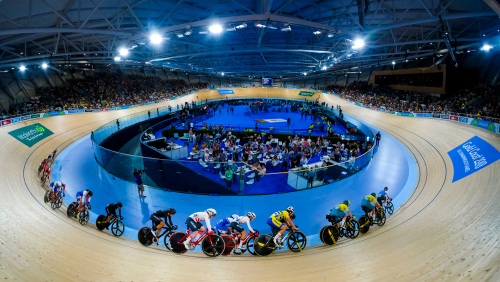 All lined up and nowhere to ride? That’s the story for Irish track cyclists, in the absence of an indoor velodrome here in Ireland. While a handful of outdoor tracks are dotted around the country – Orangefield, Sundrive, Kanturk – we’re still without an indoor facility; quite the oversight in a nation that, from the commute to competition, has such an affinity with cycling.

The National Development Plan launched by the Government in October committed to building an indoor velodrome on the national sports campus in west Dublin – though that’s a story we’ve heard before. For now, the wait goes on. Hopefully, the ambition of having a facility by Paris 2024 comes to fruition; here’s a handful of the reasons why it’s needed to put Irish cycling on the right track…

BEING THE ELITE
We’re months removed from sending our largest ever track cycling team to the Olympic Games – a quartet of athletes who’ve proven their quality on the world stage – with Paralympics hardware brought back from Tokyo, too. A bunch of young athletes dream of following their lead. But shipping our best competitors off to Mallorca for camps, as we commonly do now, isn’t merely an inconvenience but an impediment to success. Increased training time, within striking distance of home, could prove a game-changer for athletes in green; after all, our record on the roads shows we can pedal with the very best…

UP AND COMING
The old adage of ‘You can’t be what you can’t see’ is frequently wheeled out to address representation in sport; it also applies to the sport itself. What hope do we have of bringing through the next generation of track cyclists when they’ve never seen the sport up close, or had a chance to try for themselves without digging out their passport first? If nothing else, it will give many youngsters an opportunity to sample a thrilling new challenge – and beyond that, cast a wide net to ensnare the champions of tomorrow.

ALL IN THIS TOGETHER
From boxing’s High Performance Unit to the National Centres of our swimming set-up, the value of a central base for our athletes is well understood. Indeed, it’s a system that’s paid dividends for cycling in countries all over the world; it stands to reason that the same will be true when Ireland has its own ‘hub’ for the sport. Whether training as a team, pooling resources, or sharing insights, the benefits of a focal point for the sport are innumerable.

KEEP WATCHING
We’ve seen the crowds when we welcomed the Giro and the Tour, and just about every weekend the masses flock to watch everything from GAA and rugby to greyhound racing and road bowling. The appetite for attending sporting spectacles is massive – so just imagine what race meets at Abbotstown could look like. Elite events featuring top stars from our European neighbours would bring fans flocking in their droves, as well as TV and press coverage to put cycling centre stage. Build it, and they will come…

THE LONG GAME
While the immediate impact of an indoor velodrome in this country are significant, they pale in comparison to the lasting impact it could have on the cycling landscape in Ireland. The knock-on effects could drive the sport forwards for decades, as track cycling establishes itself as a mainstay in Irish life. Sports like rowing and cricket, once niche sports in Ireland, have well and truly established themselves at every level and there’s no reason why track cycling can’t follow suit – once that velodrome is built, that is!

Want to know more about track cycling? Why not check out our interview with Ireland’s first female track cyclist to compete at an Olympic games, Shannon Mc Curley.