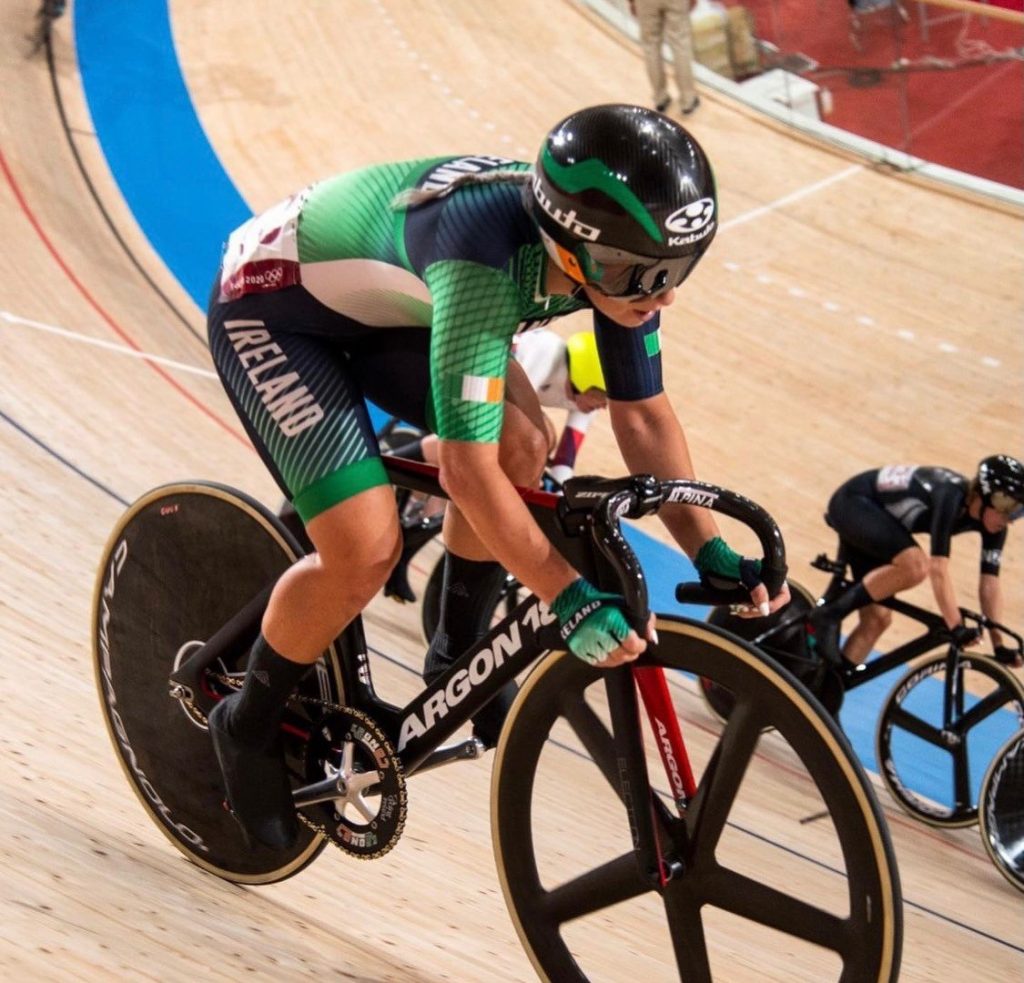 At the Rio Olympics in 2016, Australian-born Shannon McCurley became the first female track cyclist to represent Ireland at the Games; this past summer, she made her sophomore Olympic appearance, teaming with Emily Kay in the Madison. Unfortunately, the Tokyo adventure came to an abrupt and premature halt, as a nasty crash saw the pair eliminated from contention.

Having suffered a concussion and a fractured jaw, Shannon is recuperating in her Irish base of Clondalkin. And so, in between “doctor’s appointments and scans and all that nonsense,” we caught up to look back on the Games, reflect on the journey to get there, and discuss what the future holds… 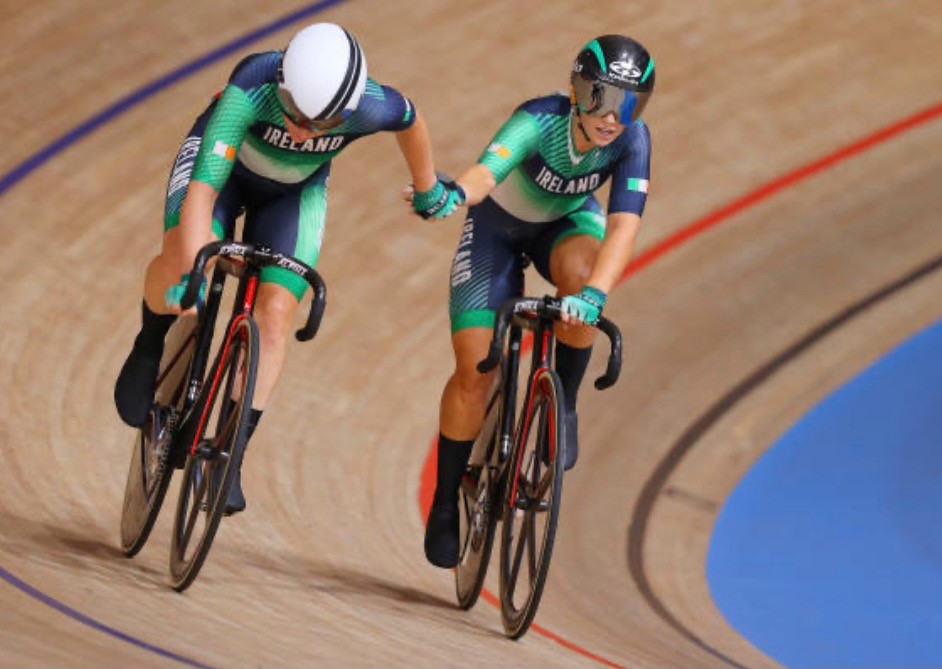 How do you look back on your Tokyo experience?

Um… I found the experience pretty grim at times. Because I had Rio, I had expectations and things like that – and because of COVID it really wasn’t the same. There was no atmosphere. We knew that going in, I suppose, but when you’re there you’re suddenly trying to pick yourself up for the biggest event of your life – while missing out on all of that. The track cycling was about two hours outside of Tokyo, so we were in our own cycling village. It just felt like a normal World Cup event, where you base yourself with other nations in a hotel. Even in that though, you’re really distanced from other nations, so you missed that proper interaction.

It is, of course, a fantastic achievement to make the Games in the first place; have you been able to take the positives in that respect?

Yeah, I feel like it’s definitely sunk in that it’s not just all about that one race, but rather what we had to do to get there. Emily Kay was my Madison partner, and then our reserve rider was Lydia Gurley; we were based over in Majorca since March, all together, and training together non-stop. You take into account the whole of the last five years, and everything that led into the Games.

At a personal level, it was five years with plenty of injury challenges. Can you take us through the various setbacks?

My first big and nasty one was on a training run just after the Rio Olympics; I was out on the road and had a motorbike cut me off. I don’t really remember much of it, but I ended up getting plastic surgery on my chin, and my elbow was destroyed; it shattered, and took three operations to get it right. I couldn’t even straighten it for a while. So, switching over from sprint to endurance during that time was pretty difficult! I had a nasty concussion from hitting my chin, too; it was a lot to come back from.

Then I got into racing, got settled as an endurance rider, everything was going smoothly, I had a great Europeans in 2019 where I got a silver in the Scratch Race. A couple of weeks later I went to London for a six-day event and a crash happened in front of me – unavoidable – and I lost about eight hours of memory to another concussion, which wasn’t very pretty. I thought I had recovered, but I had a race in January of 2020 – a few months later – which was the first time I was able to put myself in the red zone and the head was fuzzy. I got through the race, but everything was pretty blurry, I had to take a few months off the bike after that one.

Which would have made the Olympics an impossibility if it hadn’t been postponed?

Yeah, for me that was a blessing. I was able to travel back to Australia in March of that year, and get a good training block in, get my head and everything right, back in Melbourne for a good twelve months.

Those who’d never seen the Madison before Tokyo probably got a shock; it’s about as hectic as bike racing gets…

The best way to describe the Madison is organised chaos. You don’t want to get caught under a change – which I unfortunately did. You always want to ride wide. You’ve got to be on the ball the whole time; see the riders in front of you, where their partners are coming in, where your partner’s coming in, judge your speeds, there’s so much that goes into it. Even my friends and family didn’t fully realise what the Madison was; the amount of people afterwards who told me, “Oh my god, that race was crazy. I couldn’t understand what was going on…but of course you’re in the craziest race there is out there!”

How do you train for that, then? Because miles in the saddle is one thing, but simulating race conditions must be impossible?

Yeah…that was definitely part of the problem! We hadn’t raced a Madison in 18 months. You can practice slings and practice the distance – but until you’re thrown out there with 18 other teams, you can’t prepare for that. Unfortunately, because of COVID, we had no racing – which explains why there were so many crashes in our race.

Have you watched your crash back?

I have, haha. I took a risk – and it didn’t pay off. Yeah, it was just a split-second thing, and I didn’t get out of there on time. Unfortunate, but that’s life; you live and learn… 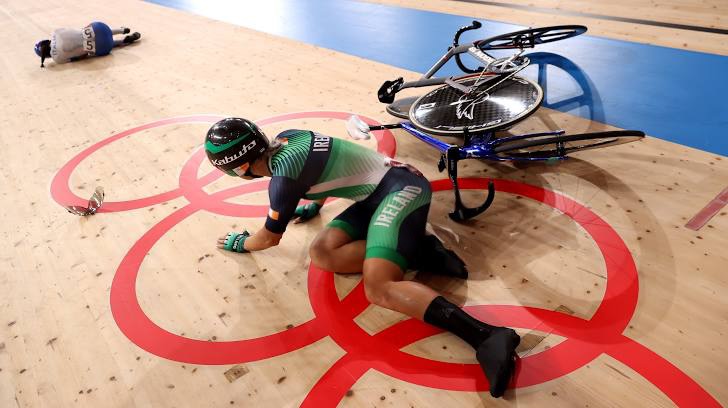 With Mark Downey and Felix English in the men’s event, it was Ireland’s largest ever track cycling team; a sign of the sport’s growth in this country?

For sure – and I feel it’s going to build from here on. We’ve also got the Women’s Team Pursuit, which has grown our team so much more. It just shows the potential for young girls coming through the sport that there is a pathway, and there is a future, when they see that there’s such a big squad of us there now.

What do you think is needed for track cycling to continue to grow in Ireland? And there’s probably an obvious answer here…

Um, yeah: we need a velodrome here! That’s the biggest thing. We’re spending long durations of time away from friends and family, because it’s what we have to do. I love basing myself in Dublin, where I have friends and family. A lot of people, when I tell them I’m training in Majorca, they think, ‘Oh, that’s fabulous, that’s great!’ Meanwhile, I’m thinking, ‘If I have to go back there one more time…’[laughs]. I mean, the weather’s great – you do get that out of it. But mentally? It’s a lot. And the only way to progress Juniors through the sport is to get a velodrome here, and get them on the track. Having to send them abroad for training camps, it’s just not going to progress the sport. You can see the way in GB, Germany, Australia – the bigger nations, and the ones that come out of top – there’s so much more opportunity.

So what’s next on your schedule?

We have our European and World Championships in October, which it doesn’t look like I’ll be at; with a concussion and a broken jaw, I’m not yet back in training. That’s going to be another one that’ll be hard to just watch on – but we’ll have a good team there, and it’ll be great to see them racing. And who knows, I might get up! But pushing on, I need to get fit on the road, back to a good base, and into next year and next season.

It’s the question you’re probably sick of being asked – but has Paris 2024 entered your thinking yet?

I mean, I always said that it would be over after Tokyo but…I just don’t know yet! I’m already looking at next year – and then it’ll only be two years so, yeah, you might see me in Paris.