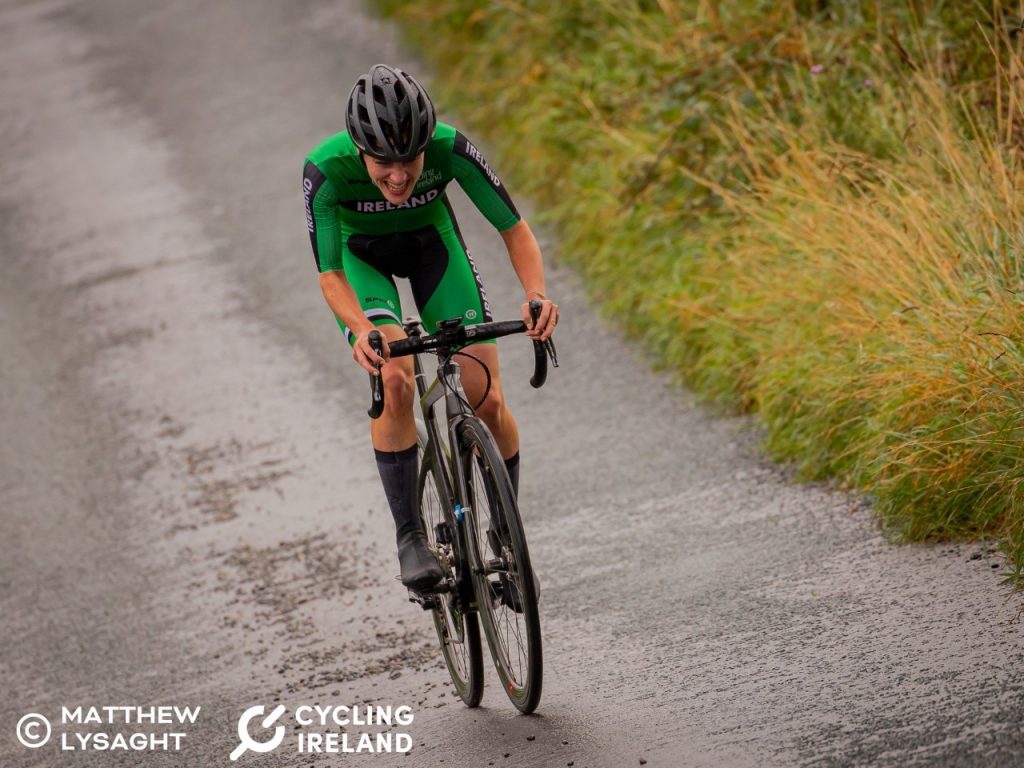 We’ve been keeping a regular eye on Imogen Cotter, the Clare-born cyclist who moved to Belgium in 2018 to pursue her professional cycling dreams. It’s almost exactly a year since Imogen gave us an insight into her motivations, her goals and her training in Belgium – which made it the perfect time to link up once again.

And what a year it’s been – from discovering the highs and lows of e-racing to the culmination of a life’s dream in representing her country. That, and a whole lot more, was on the agenda when we caught up with the cyclist at home in Ruan… 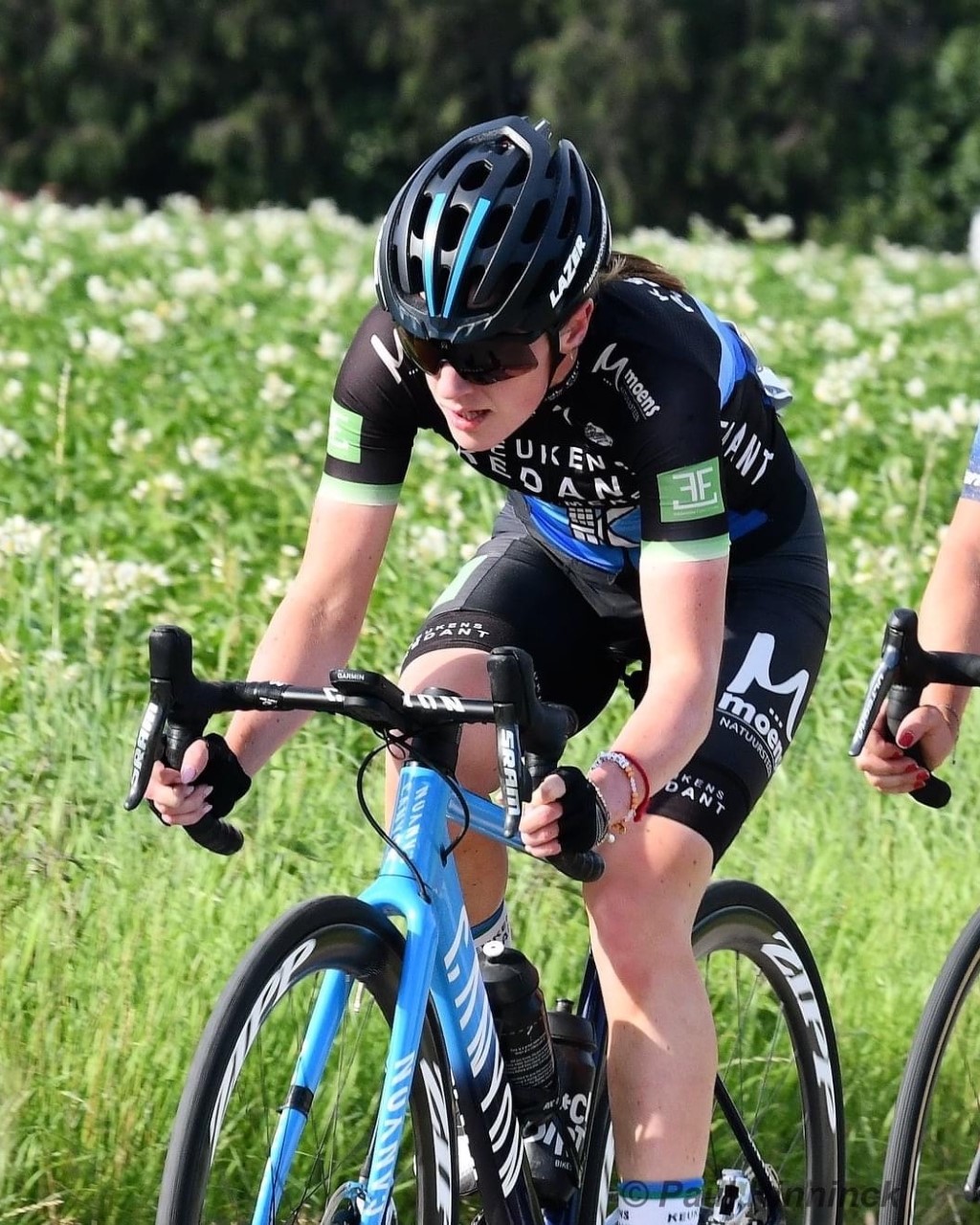 So, what’s the past year been like for you?

Well, this year has been a lot easier than last! In 2020, it was hard to stay motivated when you didn’t even know if a race was going to go ahead or not. This year has been better in terms of actually having competitions to work towards; some race cancellations, but not as many. But also, last year was kind of special; summer would normally be the busiest time, but I was able to be back in Ireland and spend time with family. So there have been some positives out of it!

At that time, we talked a lot about motivation and goal setting. That must have proven especially important during such a volatile time?

It became about finding small things to aim for each day – if I had a training session, then making sure I got the most out of it. And also, working on my mindset a lot more, in terms of self-belief and motivation. There were definitely times where it wasn’t so easy. I had to go to a sports psychologist towards the end of the season, because I just had no motivation left; I knew I had races coming up, but I was mentally drained from a year of training inside on my turbo. I remember being like, ‘I cannot imagine doing these races’. By the time the off-season arrived, I couldn’t even look at a bike for a few weeks…

I spoke with two different psychologists – one that I was going to myself, the other who I just happen to know – and they both told me that last year they had a record number of athletes reaching out with a lack of motivation, or feelings of doubt. When you can’t compete, and you’ve been training without solid goals, it’s normal to feel that way. I can’t think of anyone who’d be able to come through a year like that without some sort of mental setback.

After that craziness, how was it to get back in the swing of things for 2021?

Well, it was a bit easier after a break; winter training is a lot of base miles rather than competition, and it was stuff I was really enjoying doing. I felt my fitness rising again, and I got into a rhythm. Sometimes, it turns out you do need to take your foot off the pedal – literally!

The early part of the year saw you compete in e-racing. For the uninitiated, can you get us up to speed on what that’s all about?

I use a training platform called Zwift – though there are lots of others you can use! – and it’s a programme on my laptop that connects to my turbo trainer through Bluetooth. Every pedal, every power output, will move my avatar on screen. Last year it really took off because while you couldn’t cycle in a group, you could team up here. There were times where I was on the phone to my friend in South Africa, our avatars side-by-side as we trained on our turbos. It’s obviously a crazy thing to be doing – you’re used to going out for a coffee spin with a friend, or spending the entire of a Sunday out on your bike – but this was the next best thing.

I realised that more and more people were staying motivated by doing races on Zwift, and I knew myself that I really needed to do something. So my coach recommended to give e-racing a try. I didn’t start easy, either; it was the hardest training, I can’t even tell you. But just having the opportunity to race with people gave me the motivation to get through. Once lockdown ended, I thought I never wanted to see a turbo again, but over Christmas my coach sent me a text that there was an exciting opportunity coming up with Movistar – a WorldTour team – who were the first to set up and e-team. I tried it out, and basically got onto the team.

Competitive racing from the comfort of your living room?

I had a pretty good set-up in that I had a good turbo, a good bike, and my laptop and TV. But then, I had an ironing board beside me with an energy gel and some drinks – it definitely wasn’t anything fancy – and beneath me, a plastic sheet to gather up all the sweat. Sounds gross, but it has to be done! When I first started, I didn’t have a fan; the second they started selling them in Aldi, I was straight in there!

It’s a bit of a cliché – but could you imagine e-racing as being a sport of the future? From travel to traffic, it seems to have certain benefits over the traditional form…

There are World Championships in Zwift racing, and I do think it’s something that’s only just beginning. Movistar are the first to have a team, but there’s big interest; a lot of people watched the virtual Tour of Flanders on Eurosport last year. There are people interested in watching people suffer. And that’s what it is! I genuinely think it’s because you can have a close-up view of someone working so hard, and suffering. But also, it’s untapped; people don’t know where it’s going to go, or what levels are possible. Could you go professional some day? It’s exciting – and when you look at all the different types of cycling we already have, you figure there’s room for another discipline, definitely…

Despite all that, the return to the road must have been a welcome one?

Oh yeah! Usually, I’d be a little bit of a fair-weather cyclist – I don’t always like going out in the rain – but after lockdown I turned full ‘there’s no such thing as bad weather, only bad kit’ for a while! It was actually really brilliant, because the one thing e-sports taught me was how to tap into a whole new level of effort. On the road you can tuck in behind someone’s wheel and put out a few less watts, or stop pedalling as you go downhill; Zwift, you don’t have that choice. I think it improved my fitness a lot, because when I got back on the road I just felt like I was able to do more.

So when did your 2021 season really get going?

Ummm, it’s a funny one: from February to April, the season had started but with cancellations and lockdown I had very few races. It was only in May that things really picked up. I was able to do Kermesse races regularly, and could feel myself getting back to race fitness. I had a couple of results that I was quite happy with – I had a second in a race that I was pleased about – but then I came home to Ireland at the beginning of August.

I’ve been competing since I was 17 – athletics, triathlon, and cycling – and I’ve missed a lot of family things. My little sister, who’s my best friend, was moving to Canada and I decided I wasn’t going to have another period of family time missed out on. So, coming into what might have been my busiest period, I decided to come home. And I’m glad I did, because I needed that. I’ve still been racing while in Ireland, just not at the same frequency as I was in Belgium.

Along the way, of course, you earned an Irish jersey at the Kreiz Breizh Elites – a milestone in your career?

It was great – and it had been a long road to get there. I had been selected to represent Ireland in athletics, and the week before the competition I broke a bone in my foot. I was selected to ride for Ireland three times before this, and on all three occasions I had an injury. It had just been a long slog to actually pull on the jersey; the week before the Kreiz Breizh I was so nervous that something was going to happen…

Wearing your helmet around the house?

Haha, something like that! I was so afraid in races I’d just say, ‘I’m happy to ride at the back for a while!’ I didn’t want to have anything mess it up. It was such a great feeling to finally put on that jersey, and have some of my hard work acknowledged.

And, hopefully, the first of many?

100% — I’ve been selected for high level races, but I want to get to the Europeans and eventually the Worlds. And I’m confident that will happen if I keep working as I have been for the past couple of years…

So with the prospect of a full and uninterrupted campaign in 2022, what are you looking towards this off-season?

I do think that if you continue to train super hard through the winter months, you can run low on motivation through the summer months. So, I have a gravel bike from Canyon and I’m hoping to bring that to Girona, where they have brilliant gravel trails. I’m not focusing on power and speed so much; it’s more about enjoying being on the bike. I enjoy training, of course, but you need to be watching data and numbers when you’re preparing for races. In winter, you can get a break from the numbers, so I’m looking forward to getting out on the gravel and having a data-free time!

I’d love to do some gravel races next year. It’s partly the reason I’m going to Girona; I love road racing, but I’d love to add in some more gravel ones too. Between e-sports, road racing and gravel, it’s booming at the moment, and I’m looking forward to getting involved in the lot. A lot of the gravel races I’ve seen are on the endurance side – I’ve been looking at races that are 280km, 320km – but it’s a different challenge.