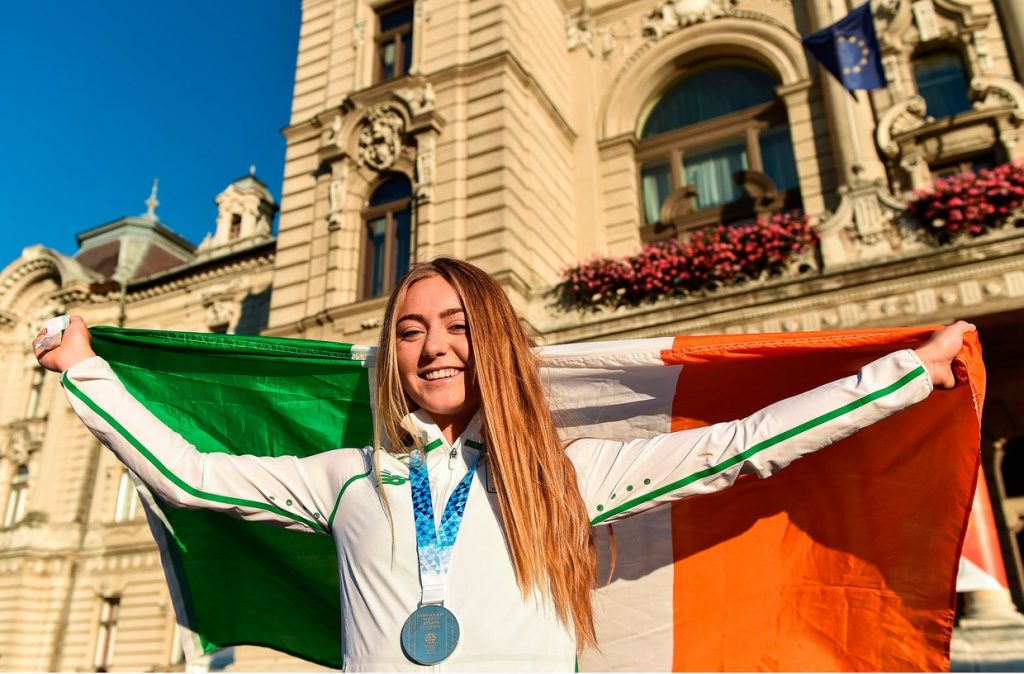 A Senior National Road Race title, a raft of National Track golds, podiums at Junior World and European level, and a European U23 silver medallist; Lara Gillespie has a resumé – and a trophy cabinet – that could put entire clubs to shame. What’s more, she’s achieved the lot before her 21st birthday.

Perhaps the brightest prospect in Irish cycling, the Enniskerry athlete enters 2022 with plenty more hardware in her sights, and the 2024 Paris Olympics already firmly on the radar. And, if life wasn’t busy enough, she’s also in the final year of her degree in Health and Performance Science at UCD. We found a gap in her schedule to catch up on her career to date, juggling cycling and studies, and her lofty ambitions for the road and track ahead…

Take us right back to the beginning – how did you get started?

I always cycled casually – on holidays, and to school – and did a good bit of mountain biking, because I grew up in the Wicklow Mountains and it’s sort of the perfect place. But I was competitive in every other sport except cycling; it wasn’t until I was 15 that I really got into it. I thought I’d joined a mountain biking club, but I’d actually joined a road club! I did my first road race and I was terrible; I crashed, I came pretty much last…but I loved it.

And never looked back?

I somehow got on the Irish team for the Youth Olympics a few months after that, and I won a medal there; I thought, ‘Oh, I’m not so bad at this’. And then I started doing track and cyclo-cross and all the other disciplines. I progressed gradually from there because I was still in school and doing other sports.

Indeed, we know you were serious about hockey, soccer, athletics, ballet, Irish dancing… Is there something to be said for being well-rounded early on?

A hundred percent. Even ballet taught me so much about structure and discipline; Irish dancing developed a lot of my muscles in ways that cycling wouldn’t have, and my running training corresponded so well to cycling training. I was always busy, and had a love for sport in general, so it doesn’t feel like a job now – I’m just fulfilling my childhood dreams, basically!

So, at what point did it become clear that cycling would take centre stage?

I always thought my hockey training and running complimented cycling super well, but when I was going into college, I had a sports scholarship for cycling and I got onto the Irish Senior Team – that’s when I decided to go full-time with cycling. I was travelling around the world for World Cup events, so that’s just what naturally happened…

How important was getting a taste of senior competition so early in your career?

Yeah, I didn’t realise it when I first got onto the Senior team – I was starting college, stressed, and didn’t realise that this was about to become my full-time thing. In hindsight, I’m so grateful that I had these few years – before it would happen in other countries who might have a lot more riders to choose from.

It’d take an age to list your various accomplishments, so we’ll ask you: what are the standouts of your career to date?

Hmmm, standouts… definitely my senior results in the past few years; as a young rider in the senior category, I think I’ve shown I’m able to compete at a really high standard, against athletes who’ve had far more experience. Obviously, my Youth Olympics and Junior European and World medals; they showed what I could do even while I wasn’t full time. Winning the U-23 European medal this year, the National title last year. And then the World Cup results we had this year, in the Team Pursuit and the Omnium – which is an Olympic event – really showed that I can step up for Paris.

When you talk about Paris, what events are the focus? Given that you seem to enjoy having a go at just about everything…

[Laughs] Well, I’m part of the Senior Irish Track Elite Squad so that’s where my priority lies for Paris. There’s an Omnium spot, a Madison spot, and a Team Pursuit spot – hopefully, we do still have to qualify and all that. It’s going to be very hard to get a road spot for Paris – an Irish woman has never gone before – but it’s definitely an aim to qualify for that, too. And I would love to do mountain biking, but that’s not on the cards!

All of this is happening in tandem with your studies in UCD – which must surely make life more difficult?

I thought it was important for me to go to college – and I’m so happy I did. I think it’s really important for athletes to have something else: to fall back on, but also to be using their minds in other ways. We need a lot of recovery time, but it’s really easy for your mind to just become numb, and I think I need to just keep learning and growing. I’ve had amazing support from the Ad Astra scholarship. I was lucky too, with restrictions; I didn’t miss a thing and got to do everything online. This is my final year, and I’ve been able to manage my modules well so next semester I won’t have a lot to do – and then I’ve got a degree in my bag!

We’re once again talking about getting a proper velodrome in Ireland – and you’re at an age where it makes a massive difference whether it arrives in two, five or eight years. What impact do you think finally having a facility here at home would make?

I think it’d make a huge, positive difference. For me personally, it means track time, getting that experience, and more casual races rather than everything being at European and World level. Then, also, getting other people involved; having more competitors in Ireland, allowing more people access to a track – and especially young people who could be potential track champions but they have no idea. I really thought it was going to be here before 2024, which would have been amazing. We do have a really good base out in Mallorca, but there are sacrifices to that; being away from family, friends, partners, college, any regular young adult experience…

When we spoke to Shannon McCurley, the appeal of Mallorca had worn off somewhat…

Luckily, when I’m out there I can still focus on my studies as well. It’s all about the mindset when you’re in those camps; getting in the zone and using it to your advantage. Yes, I could sit here and complain – it is mundane, day after day – but that’s athlete life anyway!

Looking ahead, what are the main goals for the 2022?

The World Championships next September is a major goal; we need to qualify for that, so there’s World Cups in the calendar throughout the year. That’ll count towards Olympic qualifying too, so getting good results will be huge. Also, the U23 European Championships will be a big aim for me; I have two more years in that age group; it’s really nice to know my competitors at that level and know where I stand against them.