Vuelta a España 2022 Route: Eight Summit Finishes and the Return to Madrid

The final Grand Tour of the 2022 season will take place between August 19 and September 11.

The 77th Edition of the Vuelta a España will start in the Dutch city of Utrecht as it was intended in 2020. dHowever, then the pandemic hit and we all know what happened next. The first three stages around the Netherlands have already been confirmed. There will be a time trial around the city, then a stage from Hertogenbosch back to Utrecht and then the riders will finish in the city of Breda on the third day. 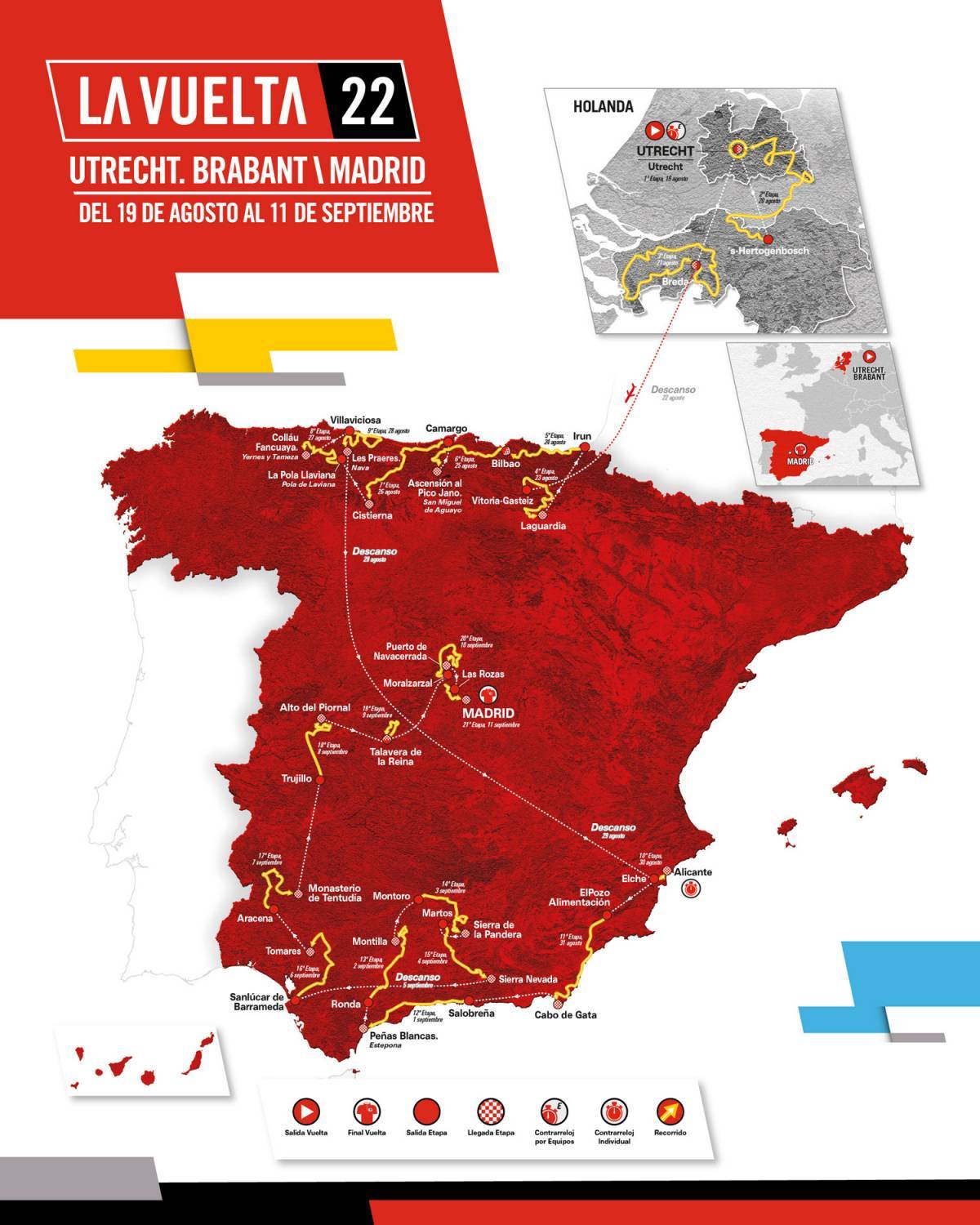 After the rest day, during which the teams will travel to Spain, the race will be on in the Basque country. The riders shall face the ever changeable weather and the first climbs.

The first summit finish will come in Cantabria with Pico Jano. Two brutal climbs await them in Asturias including the brand new Colláu Fancuaya.

In the second week, an ITT between Elche and Alicante will happen. And then the peloton will head to the Sierra Nevada mountain range including the Sierra Nevada itself as well as the Peñas Blancas and La Pandera.

The final week will bring about some more climbing in the Extramadura and then we‘re off to the region of Madrid. The riders will finish in the capital itself after last year‘s edition ending in Santiago de Compostela.

You can find the description of each stage by Fernando Escartín below:

An inaugural time trial longer than that of previous editions. 23.3 km that will cross Utrecht through its wide avenues, without technical difficulties. No significant differences are expected among the leading teams. Dutch fans, who are truly passionate about cycling, will guarantee spectator success.

A primarily flat stage. The only obstacle on the day will be a 3rd category climb that will determine the first riders to fight for the mountain jersey. Victory will be decided in a sprint to the finish-line. The proximity to the sea could provoke strong winds and add to the stage’s unpredictability.

Completely flat stage with a guaranteed sprint to the finish-line. The riders will pedal through a terrain more reminiscent of the Classic races of the North and not the Spanish roads La Vuelta is accustomed to. This factor may create some tension with regards to the stage’s development. 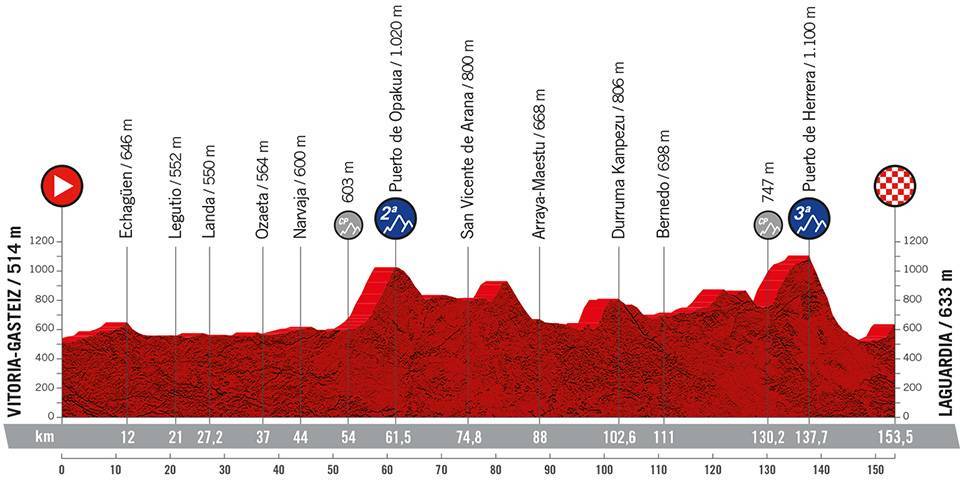 Stage with a likely sprint to the finish-line in a reduced peloton. The Herrera mountain pass will be crowned 15 km before the finish-line, then followed by a descent to the end. Sprinters who know their way around abrupt terrain will do well and have real opportunities, but pure sprinters will not be able to keep up if they speed off. Careful with the possible gusts of wind in the final part of the stage.

Beautiful stage: five mountain passes that will be filled with the Basque public. Both climbs to the Vivero in the final part will be responsible for selecting the leading group. It will be interesting to discover who controls the race, even without clear leaders in the general classification, particularly in a day that is not ideal for sprinters.

A stage where escapes are likely to go well and last until the end. The succession of Las Alisas and the Collada de Bremes will create a natural selection before arriving at Jano Peak. This long, stretched out, unprecedented mountain pass may leave one of the favourites behind if his strength fails him. 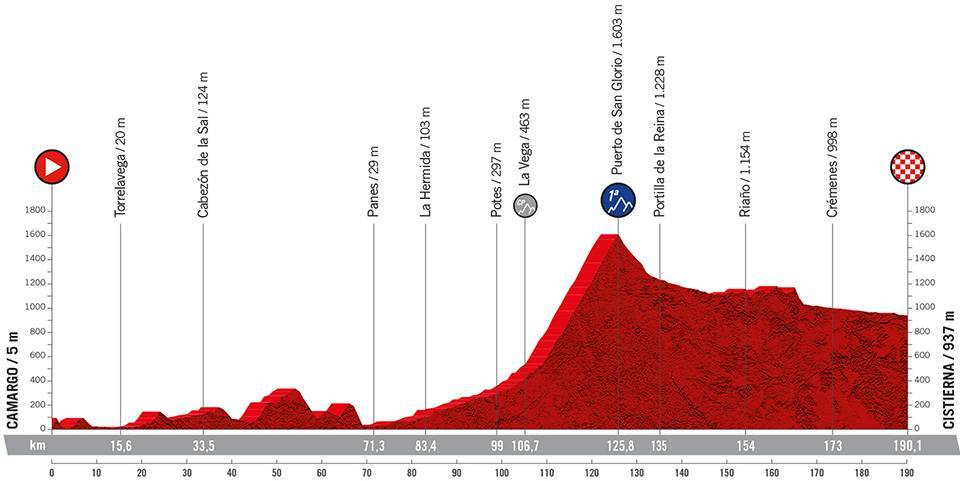 This stage is around 200 km long and consists of a territory that is ideal for escapes to take place. The route has a winding profile, with a climb up to San Glorio almost half-way through the race. Favourites will attempt to preserve some of their strength in order to face the weekend ahead, which could greatly benefit those aiming to obtain a stage victory. 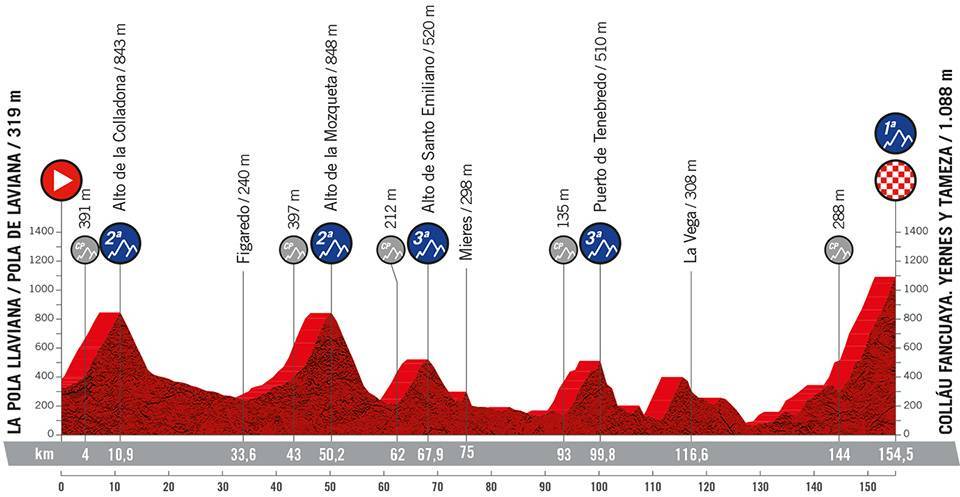 This year, the Principality of Asturias proposes two very different stages. This first one features over 3300 metres of slopes and has four climbs before the unprecedented ascent of the Colláu Fancuaya – a mountain pass.

Extremely tough stage to conclude the first week of racing. Riders will climb four mountain passes before arriving at Les Praeres, the Mirador del Fito being one of them. The finale will take place at the Nava summit, which we discovered in La Vuelta 18. An authentic wall – short and very explosive – made up of four kilometres that will measure the strongest riders’ true abilities.

Completely flat individual time trial, spanning over 30 km. The general classification favourites should not have any great difficulties, but other riders with a more pronounced climber profile may struggle. Particular care will have to be taken during the final part, along the Levante coastline, where strong winds may be problematic.

A day for sprinters to put their teams to work. The stage features some steep slopes but no notable difficulties, so a mass arrival to the finish-line is expected. Sprinters will have to know when to make the most of their options as this edition does not lend itself particularly well to sprinting opportunities. The wind may play a very important role in Cabo de Gata.

The peloton will cover all of the Province of Málaga, from one end to the other. It will be a completely flat day until the Peñas Blancas climb. Although this mountain pass has already featured in La Vuelta before, it will be four kilometres longer (making a total of 20) in 2022. Very tough finale that may make important changes to the general classification.

Although the first part of the stage is more meandering, the second part is practically flat. Accumulated exhaustion following Peñas Blancas may pose a problem for the sprinters. The most explosive riders will have to make their teams work hard in order to control the arrival at the finish-line. 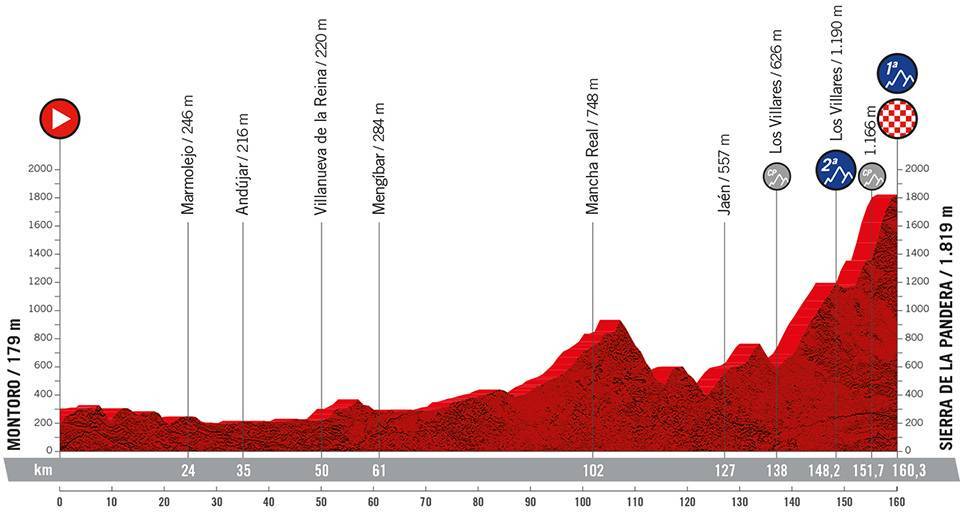 The stage has two very distinct parts: one gentle and the other featuring constant climbs. If a breakaway is to be successful here, it must be in full motion before arriving at La Pandera. The climb, a La Vuelta classic, is tougher than it looks, along a narrow road and on rough pavement. It will really test the climbers. 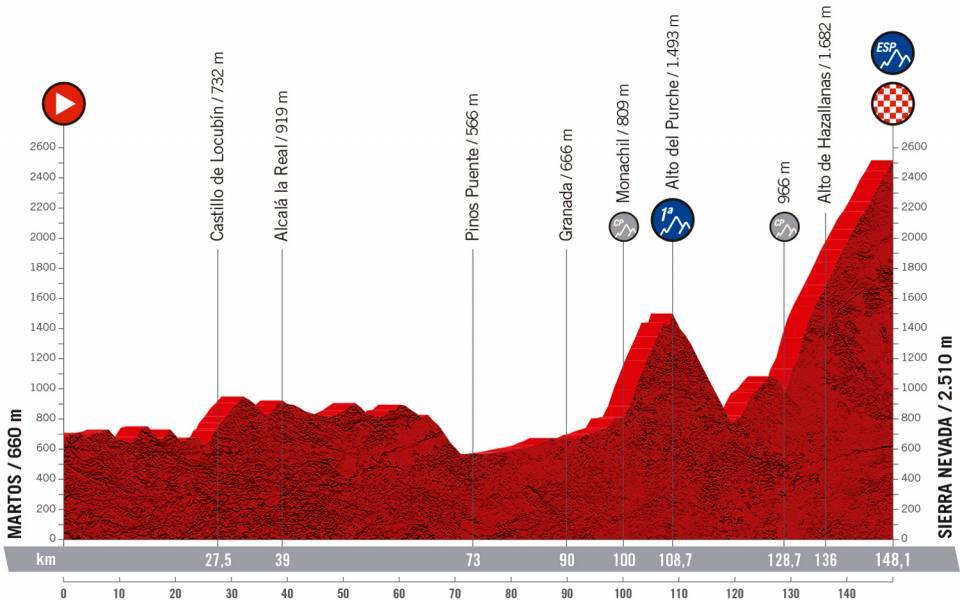 Pure mountain stage, over 4000 metres of slopes in total. The stage will take off from the Province of Jaén, where the heat will, undoubtedly, play an important role. The second half is very tough, with climbs up the Alto del Purche and the Hoya de la Mora – a long, demanding mountain pass that was a La Vuelta 17 highlight.

After Sierra Nevada and a well-deserved rest day, the sprinters are going to need their strength again. Tomares, where Matteo Trentin was victorious in 2017, will offer the last great opportunity for sprinters before the final stage in Madrid.

Leg-breaker stage, with constant ups and downs, that is sure to be affected by the Extremadura heat. It will be a golden opportunity for a breakaway. The final climb up Tentudía is not excessively difficult, but it is unlikely to end in a sprint (not even for a reduced peloton) and will not be conducive to creating any big differences among the favourites. Those who manage to escape will have to work really hard.

This will be a tough and very beautiful stage, especially in its final part. Its second half will feature the climb of the Piornal, which will take place along three different slopes. First by the Desesperá, then by the Monastery of Yuste and lastly by the Hervás Valley. This will be a day for the favourites and their teams to work on their strategies if they want to shake up the general classification. 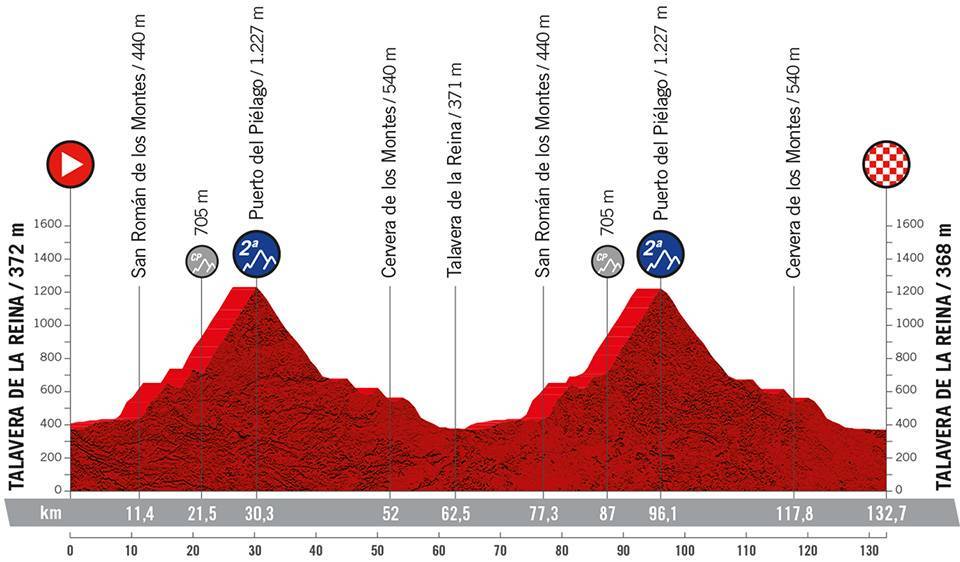 An interesting route, short but deceiving. The stage consists of a circuit involving two climbs of the Piélago mountain pass. 130 km in total that will force the breakaway to buckle down if it wants to do well. Look out for the riders with a good top speed who do well mid-mountain as they will have real options to win here. 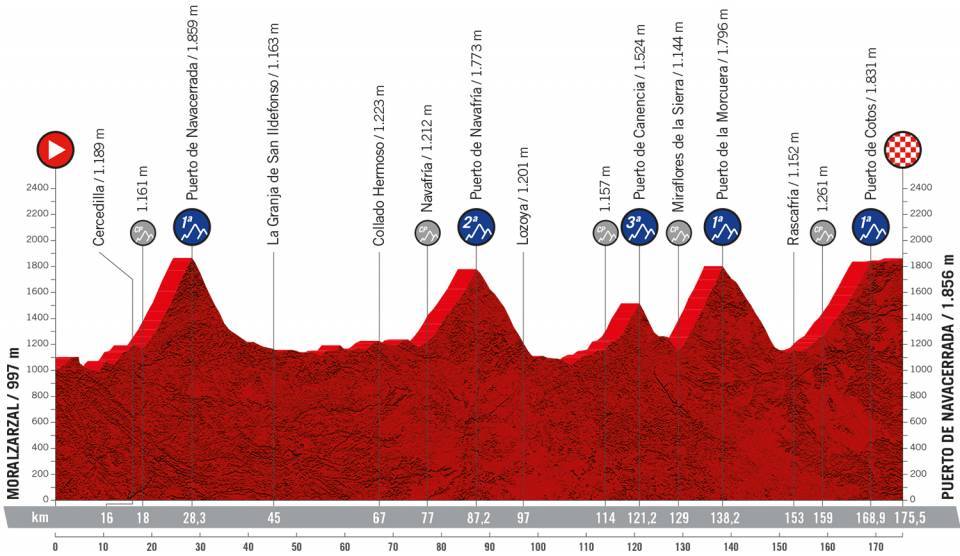 Many may recall the stage where Fabio Aru was declared the winner of La Vuelta 15. This one is very similar. A classic route along the Guadarrama Mountain Range, with climbs up the Morcuera and Canencia mountain passes and two laps of Navacerrada. The teams can prepare their battle strategies from the beginning and make this stage a decisive one for the general classification. 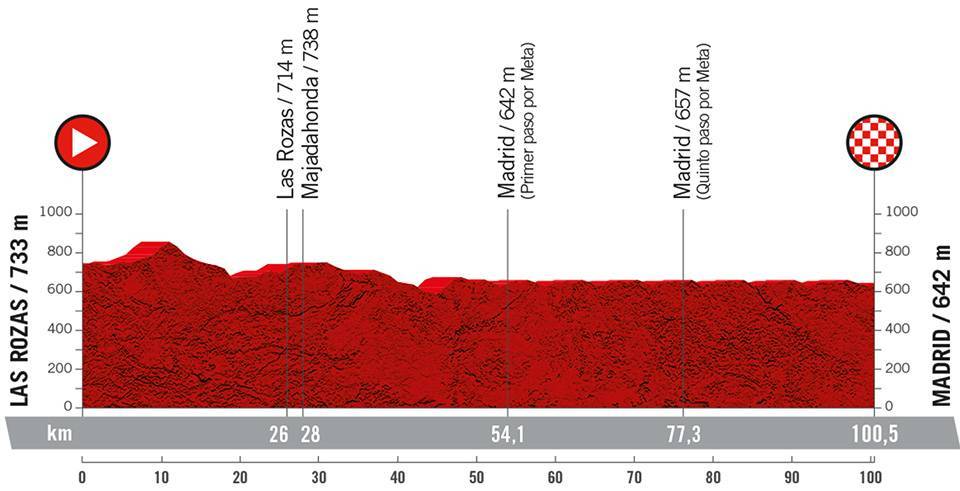 La Vuelta returns to Madrid. A well-known route through the capital’s main arteries, enjoyed by the peloton like a prize in itself. It is a day for smiles and celebrations. Sports-wise, a sprint to the finish-line is expected, where the winner of La Vuelta 22 will be crowned.

Can Wout van Aert Win the ŠKODA Green Jersey in Next Year’s Tour?

Should Cyclists Use BCAAs – Are There Performance Benefits?