Wintertime Cycling Getaway Tips: No Cold and Snow Can Get You on Mallorca

It’s no secret that the tropical island paradise of Mallorca is a go-to winter sanctuary for many who refuse to let winter snow on their cycling parade. But with the local trails steadily gaining notoriety and fame, it might be hard to pick the right ones for you among all the travel blog odes and Insta-ready locations. That’s why we’ve called on Cameron Jeffers, a semi-professional cyclist and Youtuber, who occasionally teams up with We Love Cycling to give things a first-hand try and tell you all about it so you don’t have to lose precious time, which could be used for cycling, with research.

You can, of course, explore Mallorca via the impeccably kept roads it offers but you might also want to venture off them. To get swiftly and safely about, even when switching to backcountry roads, Cameron accompanied himself with the recently-facelifted ŠKODA SUPERB SCOUT decked in the Lava Blue shade. He took two bicycles of choice with him because he didn’t want to be limited by terrain – road bike and gravel bike. It also goes without saying that you should gear up properly when going cycling to Mallorca because you’ll be probably doing a lot of climbing. 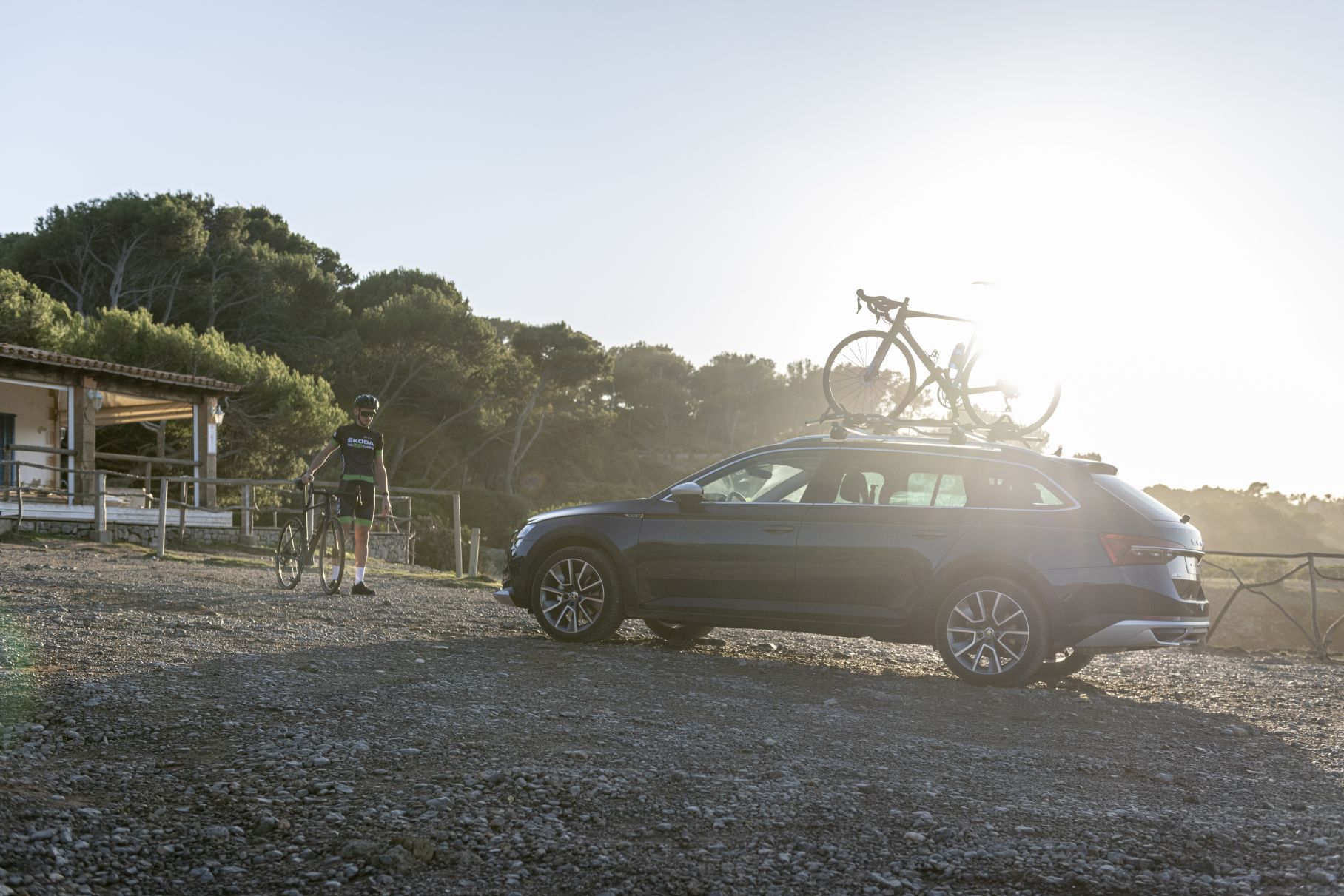 If you are not one to keep it on the road at all times, riding gravel lets you get off the pavement or tarmac and have some fun on less frequented trails. Some cycling outlets have boldly declared mountain biking dead because gravel is the talk of the town now but we wouldn’t dare to cast such a harsh judgement. Anyhow, the truth remains that gravel tyres on mountain or road bikes are amassing a growing fandom among cyclists and Mallorca in winter lets you enjoy different kinds of road and off-road conditions. Regarding safety, there might be less bicycle traffic on the gravel trail but you still have to keep an eye out for animals, roots, stones and surface condition. “The nature is as rich as the climate. As we are driving through the road, you can see the trees, the birds, and especially the cows that end up running across the road, as I had a recent experience, I know you’ll ride into one,” Cameron can be heard quoting and laughing in the video. The gravel adventures you see in the main video happen on the trails close to the city of Alcúdia so be sure to note that name down.

The first Google session on Mallorca cycling spots will give you all the big names – the famous hairpin Sa Calobra climb, the scenic road to Cap se Formentor but what about Cameron’s personal favourites he’s tried and tested?

“It’s really hard to narrow it down to just my three favourite spots to cycle in Mallorca, there’s just so many to choose from. But firstly, Coll De Femenia which is located just outside of Pollenca at the foothills of the Tramuntana mountain range. It’s around 7 km and the views are stunning, it’s not too steep so is a great first climb when you are starting your ride,” Cameron shares his favourite descent/ascent.

“Furthermore, I think my single favourite road on the island is the coast road that joins Valldemossa and Deia. It’s a little quieter over that side of the island and the views of the deep blue sea to your left and the mountains to your right are simply breathtaking.

Along the route, you pass a couple of local villages that you can stop at and grab a coffee. Perfectly smooth tarmac and the sun in the sky, it simply doesn’t get much better,” almost daydreams Cameron and we can’t blame him.

“Finally, my favourite route that also includes the abovementioned road starts in the coastal town of Puerto Pollenca, heads out along the flatlands towards Sa Pobla then to Valldemossa before looping back home via the mountains while taking in the great ‘Puig Major’ climb. 14 kilometres of snake-like climbing until you reach its peak. You then continue riding for another 15 km along the top of the mountain before finally descending Coll de Femenia, back down towards Puerto Pollenca.

Finishing the ride at Cafe 1919 for a coffee (and maybe some cake). The total ride distance is around 150 km.” Keep in mind that Cameron is a semi-pro cyclist and that a feat like this one requires some training and knowledge of your abilities. However, there are so many scenic sections along the route that you can do smaller bits on a bike while using your car to relocate wherever you feel like.

Road etiquette is serious business on the island – be especially careful about the common combination of hot braking and tight hairpin bends while descending. Keeping an eye for your fellow cyclists on the bike path is a no-brainer but one must also beware of obstacles, people on walks, skaters, runners and even wind-surfers coming up from the beaches as winter in Mallorca can be mild and balmy. All in all, the island’s inhabitants are really used to a nearly constant presence of two-wheeled enthusiasts. “When I first came to Mallorca five years ago I was amazed by how accommodating the locals are to cycling,” notes Cameron. When we were driving around in search for the perfect cycling route, we really appreciated the aid of smart car features that helped us to abide by local road rules and kept us and the Mallorcans happy, such as the predictive cruise control that automatically adapts to road conditions.

But keep in mind that while locals won’t give you trouble, you should never forget to take proper sports clothing for both warmer and colder, wetter weather because you might easily reach some high altitudes and weather conditions can change rapidly in the mountains. When you venture into the mountains alone, make sure you have your bike(s), car, communication channels, and all equipment in check so you’re in the clear should you have an emergency. When the weather turns awry, you might appreciate smart gadgets and features as Cameron did in the video below – the new ŠKODA SUPERB SCOUT has a built-in boot-opening mechanism that reacts to the gesture of your foot which means getting inside without fumbling for keys while keeping your hands free to handle your bike and gear.

Does winter cycling in Mallorca sound like something you would love to do? Did the stunning views, engineered roads, serene forest trails, sandy beaches or deep blue lagoons captivate your heart? Tell us on Facebook and if you have tips of your own, we’ll love it if you share them with us!