Most of us are happy just to have a nice bike. Or two… But would you splash out extra for […]

Most of us are happy just to have a nice bike. Or two… But would you splash out extra for a limited edition from your favourite brand?

In 2017, I was lucky enough to be sent along to the Grand Départ in Düsseldorf and two of my favourite passions intersected – cycling and techno. Canyon’s founder and CEO Roman Arnold grew up as a huge Kraftwerk fan and Düsseldorf was home to both the band and the entrepreneur. So, it seemed fitting that Canyon would ask the Kraftwerk founder and cycling enthusiast Ralf Hutter to produce a design for the bike.

The design was so difficult to apply that only 21 of these bikes were produced. Tony Martin had the honour of riding the bike in the opening time trial and after a fantastic day of racing, Kraftwerk played songs from their album Tour de France. It doesn’t get better than that.

Last year, Dan Craven decided to buck the pro-racing trend by opting to start the Commonwealth Games road race on Australia’s Gold Cost on a steel-framed bike. Partnering with the Woolwich-based boutique workshop, Craven wanted a race geometry but with the toughness of steel.

Clearly, Craven wanted to do so in style, and I honestly can’t think of another English bike manufacturer who consistently turns out paint jobs this beautiful. One limited edition of such beauty is an achievement. But they have quite the catalogue – and they do mountain bikes too.

It doesn’t get much more limited edition than a run of one (1) bicycle. Argentine-Spanish artist Felipe Pantone was asked to help create a bike to be auctioned for the very worthwhile charity – World Bicycle Relief. Pantone enlisted the support of Romance, a small London cycle apparel with an eye for colour, and an understanding of #cyclechic. 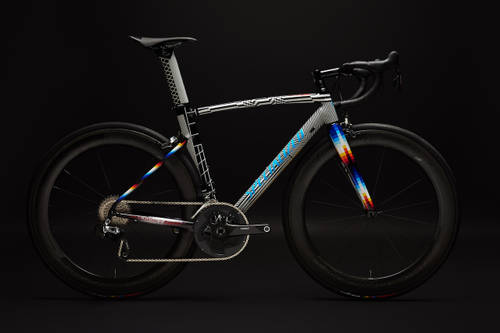 The result is a breathtaking realisation of Pantone’s artistic vision and considering the artist says he’s, “all for people interacting with my artwork”, you’ll literally be riding a work of art. And what a work of art – a Specialized S-Works with SRAM RED eTap groupset with carbon Roval deep-section wheels. Auction house Sotheby’s London have valued it at £35,000.

But fear not, you can buy a similar N1NO HMX frame kit, with colour-matched Syncros Hixson handlebars, SRAM XX1 AXS group, Level Ultimate brakes, and RockShox suspension – but the pricing is yet to be announced and only 100 will be available. But you still won’t be able to get your hands on a Courtney frame and, frankly, there’s little point you owning one. Unless you want to hang it on your wall to admire – or you’re Courtney’s long-lost twin sister.