It’s never too late to start something new. You can improve your body balance with yoga lessons right after you’ve turned fifty or start collecting cycling bidons. The best time is right now and we’ll tell you why.

In French or cycling geek language, a ‘bidon’ means a water container used by cyclists to stay hydrated while riding or racing. Just a quick research on Facebook will let you know that there are devoted collectors hoarding various kinds of plastic bottles that once belonged to famous riders or their teams. Most of the communities seem to be based in France, with names such as Collection Cyclisme et Bidons, Math Vente Bidons Cyclisme or Collection de Bidons.

Sooner or later, every collector realizes that the subjects of their interest are rare and hard to find, so it takes a lot of effort to expand the collections with new items. Luckily, this is not the case with bidon hunting.

Right after being accepted to a collectors’ group on Facebook, you can trade bottles of any kind, and on top of that, you can find plenty on eBay or on collectors’ websites for prices starting at 2 euros a piece. Apart from searching on the web, the best place to grab an original professional cycling team bottle is right where the sport takes place: along the race tracks.

While in the past cyclists used to carry bottles made of glass in leather satchels fixed to the handlebars, in the 1960s the down-tube bottle cages prevailed, holding a bottle made of aluminium and later plastic. The material used for the bottles is not the only thing that has evolved. For many years, cyclists made short stops in cities to refill their bottles from water taps, but taking breaks just to have a sip of water (or even wine) has become as obsolete as smoke breaks. Today, bidons are tossed away right after every last drop of water has been squeezed out, to the great cheering of the souvenir collectors and the horror of environmentalists. 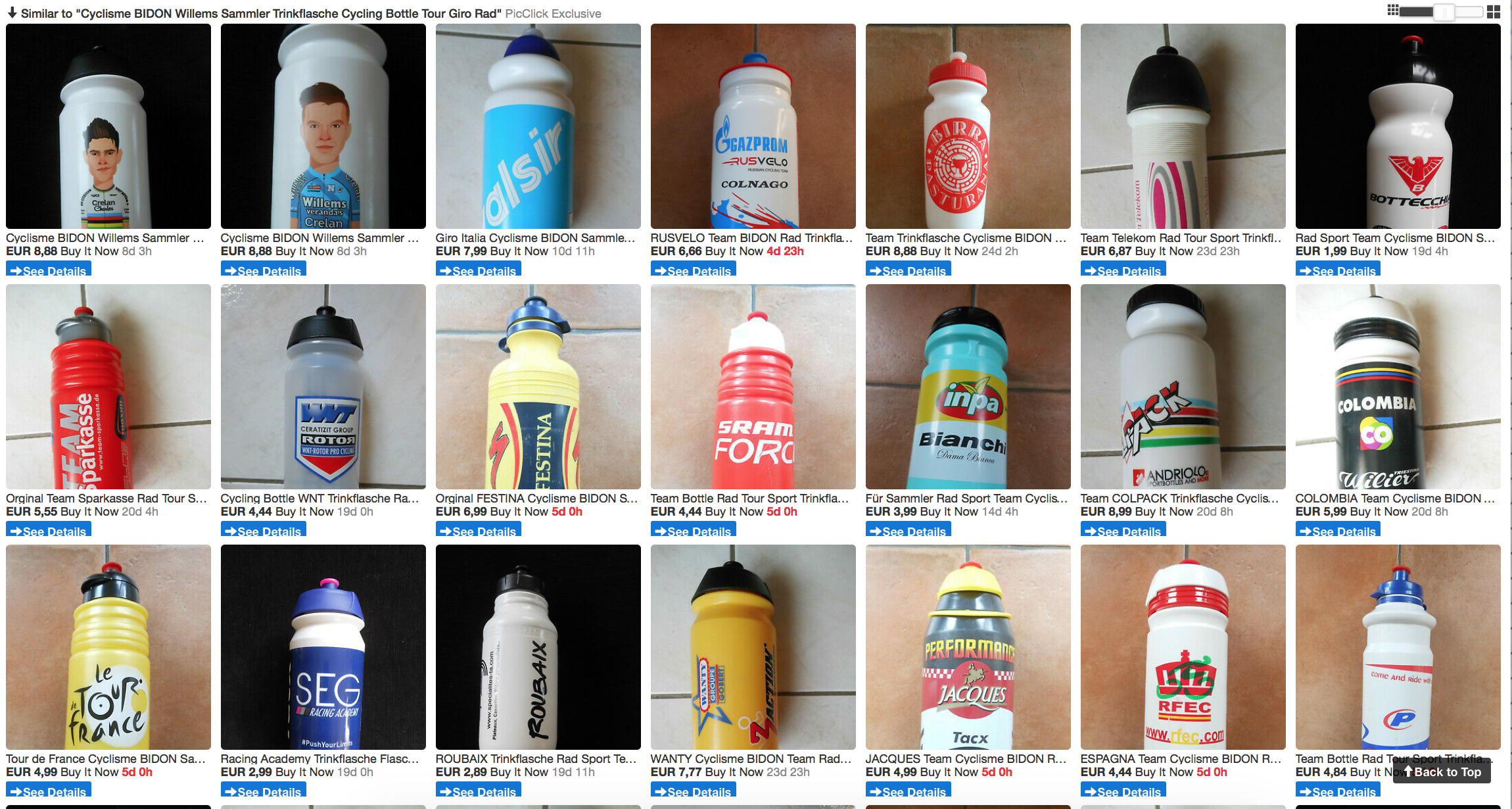 It’s been calculated that around 9,000 plastic bottles are about to be discarded by the peloton during the entire duration of the Tour de France. Anyone looking for a freebie is encouraged to wait right before a feed zone or long climbs, where riders ditch excess water bottles to get rid of unnecessary weight. Despite the fact that many bottles are collected by the fans, there’s still concern about plastic rubbish, including water bottles, food wrappings and gel packages, ending in the undergrowth. While environmentalists have declared war on plastics killing endangered turtles in the oceans, what about starting a new hobby in order to keep the countryside free from bidons left there by our cycling heroes? The reward is much sweeter than the money you can get for it on eBay.