The cyclists of Le Tour need looking after, and so do their bikes. The cars provided by ŠKODA covered 2.8 million kilometres during the 2016 Tour, in a fleet of 250 cars – a motorcade that would make any President blush with envy. So, what do all these cars do?

If your bike suffers a mechanical failure you need a car that’s easy to spot in a crowded field, and help appears as a ŠKODA OCTAVIA with a yellow paint job and Mavic decals – they’re big enough to carry water, wheels, and entire bikes in case of emergency.

In 2010, Jens Voigt crashed his bike so badly it was beyond repair – he grabbed a Mavic bike from atop the nearest yellow ŠKODA, and even though it was several sizes too small for him, the bike was enough to keep him in the race.

As you may expect, Christian Prudhomme rides in ŠKODA’s flagship model, the SUPERB – although this particular car is unique. Prudhomme’s Superb has a custom-made sunroof to accommodate various duties of the race director, including waving the flag at the start of each stage to signal the official start of racing. 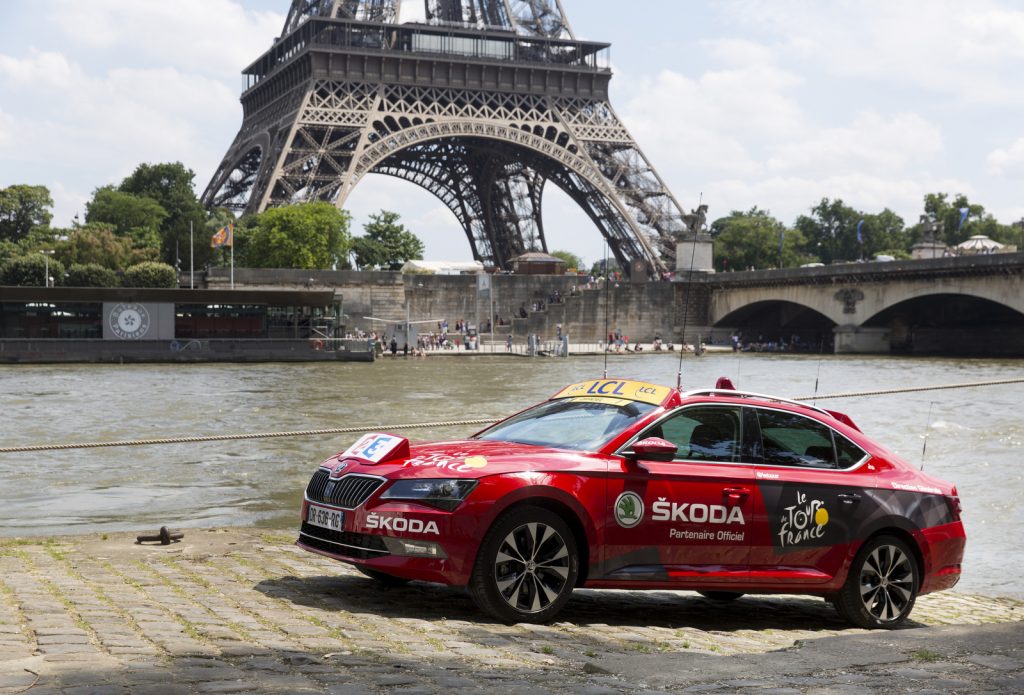 The red SUPERB also comes with special holders for champagne flutes and a bespoke communication system, so Prudhomme can toast the successes of the riders as well as keep in touch with the teams.

Apart from Mavic’s neutral support vehicles, there are two cars per team that follow the peloton. The order in which these cars follow the race is determined by the ranking of each team’s leading rider.

Prudhomme will keep in touch with the fleet of cars, most of which are OCTAVIAs, and share information about the race. Communication between cars is critical, as breakaways and crashes need to be reported so that permission can be granted for the support cars to break ranks and move up or down the race as needed.

Each ŠKODA is a mobile workshop, and reports of a cyclist in need will mean the cars need to be agile enough to weave through motorbikes, groups of riders, TV crews, as well as the other support cars. The quicker these cars get to their riders, the faster they get back into the race, keeping the teams, sponsors, and fans happy.