Beaten Up by a Lady? Violence Against Cyclists Is Nothing New

With the rapid expansion of small and relatively cheap cameras like GoPro and the simplicity of viewing the captured scenes of cyclists being abused on YouTube, it might look like the violence against riders is on the rise. But as the vintage newspaper article below shows, the problem has always been there. Now we’re just more aware of it, and hopefully that will cause its faster disappearance. And while we wait for that to happen, why not amuse ourselves by reading about a case of an attempted cyclist abuse which, over the course of time, became properly funny?

The date was July 1, 1899 when a British weekly magazine, called The Illustrated Police News, published an article with the title “THRASHED BY A LADY CYCLIST, WHO IS NOTED FOR HER ATHLETIC POWERS” with a great illustration and an amusing story. 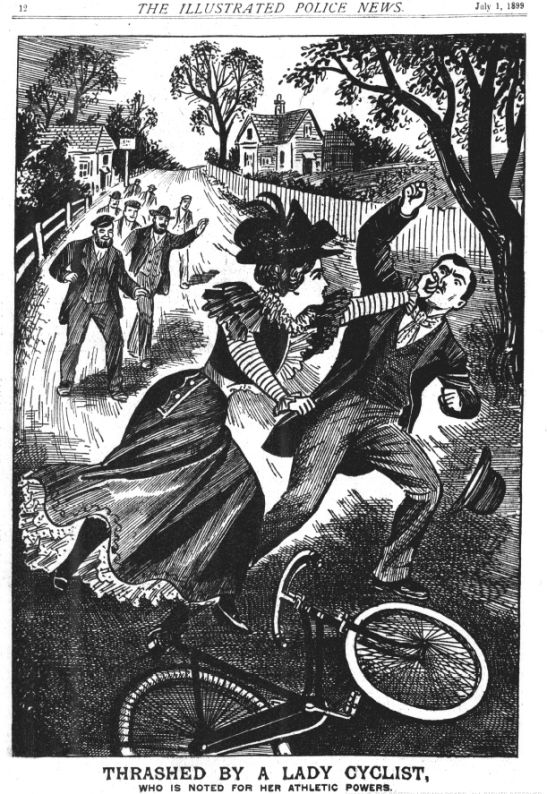 “An extraordinary scene was witnessed on Saturday morning in Peel Lane, a thoroughfare connecting Little Hulton with Tyldesley, in which the principal participants were a young lady cyclist and a youth of nineteen or twenty. The lady was riding at a good pace, and when in a quiet part of the road the young man, who had apparently been imbibing, stepped into the roadway, and, addressing some insulting remarks to the cyclist, made as if he intended pulling her off the machine. She immediately alighted, caught hold of the astonished youth, and gave him a sound thrashing, using her fists in scientific fashion, to the delight of several colliers who were passing. The young man made off, and the cyclist, who is believed to be a Bolton lady noted for her athletic powers, rode off towards Tyldesley.”

While I definitely don’t condone violence, as a woman I can’t help smiling at the outcome.

Favorit: Will The Legend Be Reborn?