Have you ever wondered how some of the mountain bike photos in magazines were taken? It sometimes takes unimaginable effort to make a single “beauty shot”. This is the story of one of them.

When the time comes to talk about great mountain biking photography, people mostly mention strange words such as aperture, ISO, shutter speed, composition, white balance, or photo editors. Of course, there are volumes of books written on all of these topics but have you ever been thinking about what is really behind a great picture? Sometimes, it’s a long story full of intense preparations directly on the spot. Our ambassador Richard Gasperotti reveals what led to this awesome picture made by Czech sports photographer Miloš Štáfek. Read his narrative below. 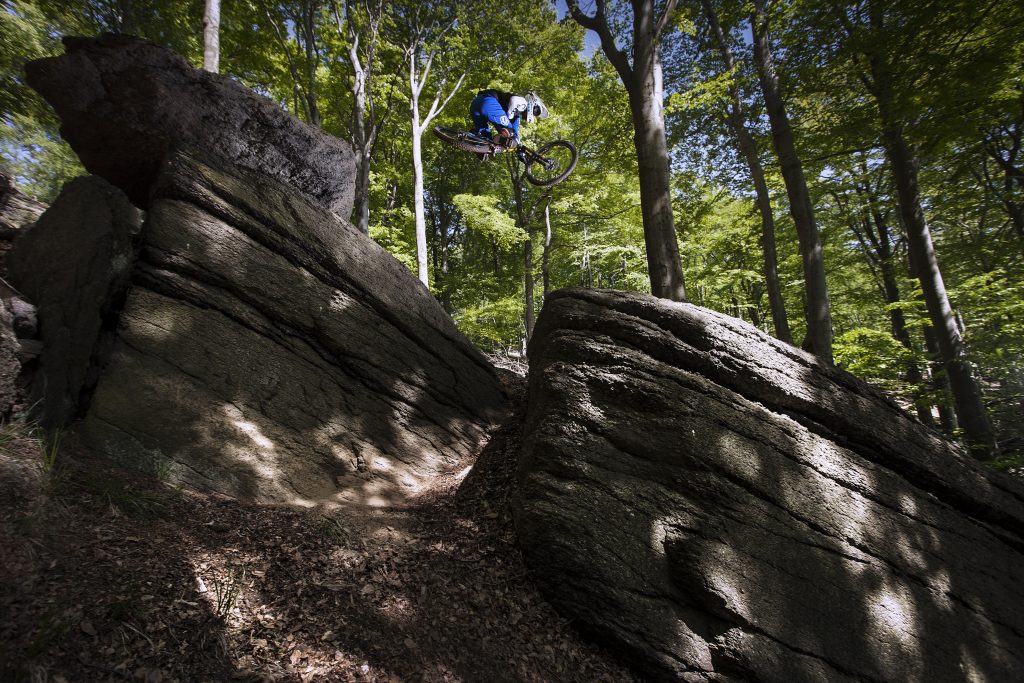 Due to mild winter, it was possible to ride all year long in my home region of Ore Mountains in the north part of Bohemia. I am always on the lookout, searching for potential locations for photo shooting or filming. After the leaves fell down in November, it was easy to observe the depths of the forest straight away from the biking trail. 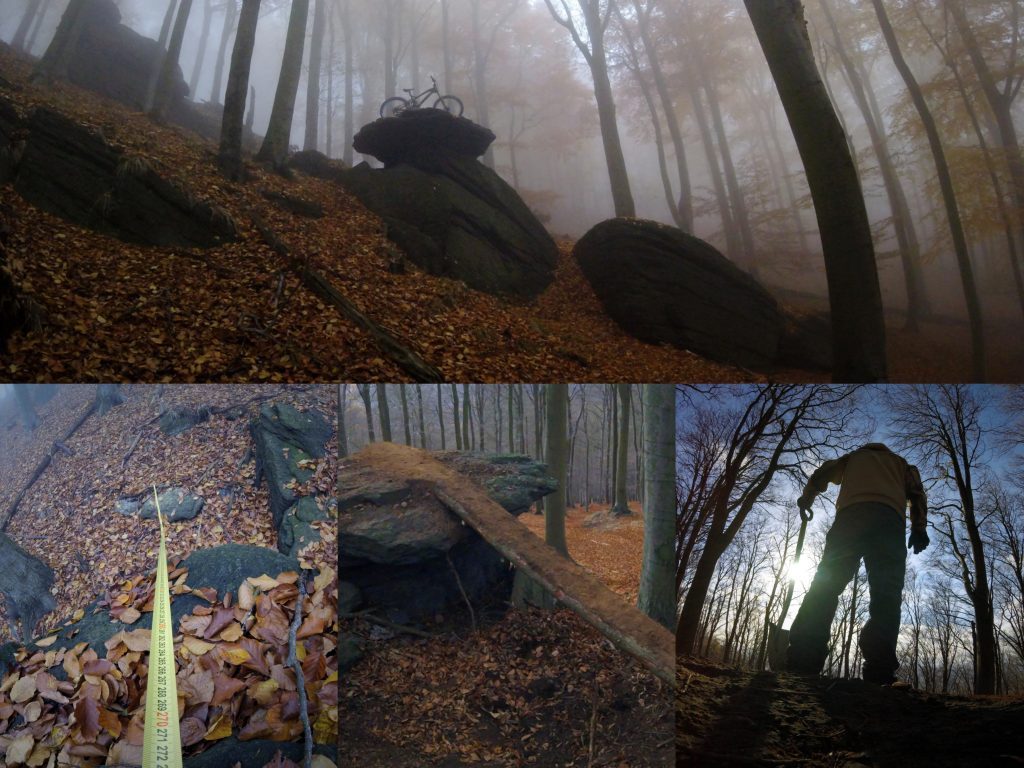 This way I’ve discovered an auspiciously looking geological formation in the middle of the woods. I got off my bike, and while exploring the surroundings I found two big rocks close by, where it would be eventually possible to jump from one to another. The only obstacle to doing so was an absence of a ramp leading to the edge of the upper rock. However, my imagination was already sparked. I photographed the spot from all sides with my cell phone and called my friend to meet him in a pub, where we both came to an agreement that this was worth trying.

One day in January, we set off to visit the location once again to make sure I wasn’t dreaming up the impossible. At the end of February, I built the ramp and cleared the landing. Unfortunately, everything became more complicated in May, when the forest labourers began with a massive lumbering that, beside the other things, included also my ramp built of round timbers and logs.

In that sad moment, I remembered the system of wooden bridges we used to ride on in the 90’s during the Canadian mountain biking tour show called Flowriders, under the leadership of the legendary freerider Dangerous Dan. The idea was to build exactly the same mobile ramp that could be put together at home and brought to the location at the time of the photo shooting, so nobody would destroy it before the D-Day.

While making inspection I measured the site properly from all angles, and then bought everything needed: the wood, the bolts, the nuts, and the steel tubes. I also asked my father Richard for help. 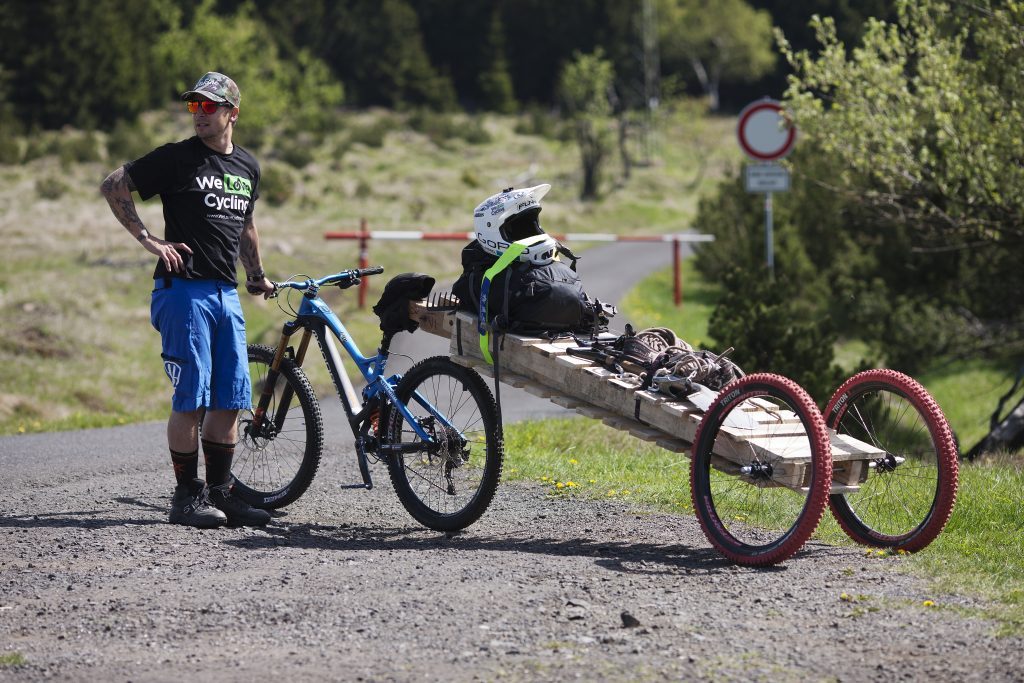 Without him, this venture would not be possible – the same goes for the most of my other projects. Thank you, daddy!

We needed to get the ramp to the spot, which seemed to be the tough part as the location couldn’t be reached by car. From the firmly locked gate, it was still a 3km-long route to get to the spot and the only possibility was to walk or cycle. 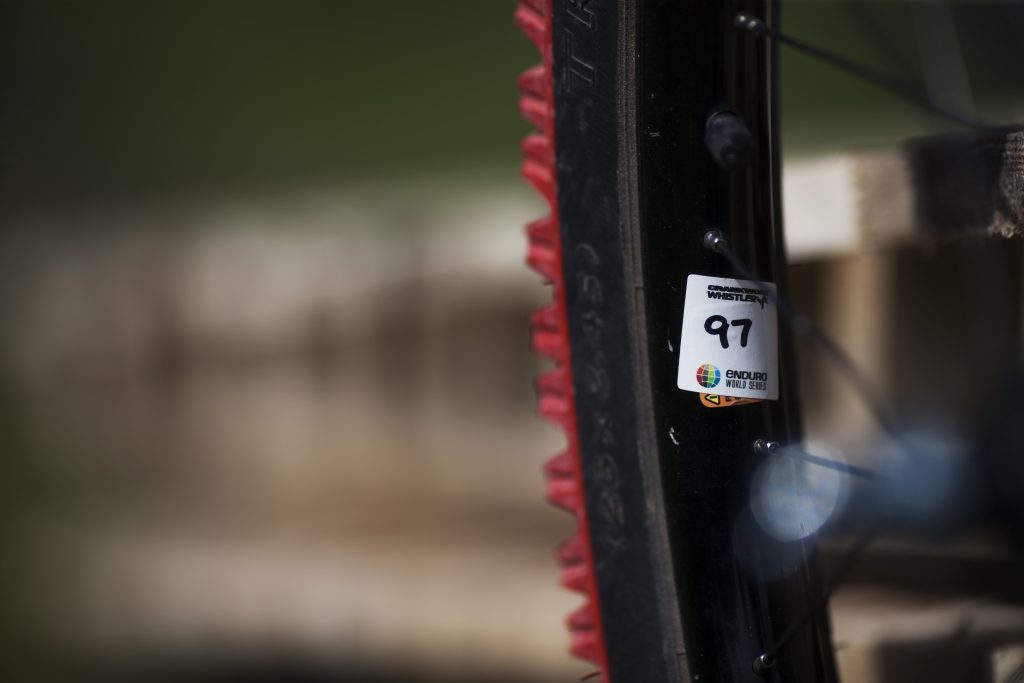 With this intention, we designed a transport cart that was to be towed behind the bike. To assemble it, we used spare bike parts such as the FUNN 26’’ or Rubena red tyres. The funny thing was that the cart had exactly the same rims I had on my bike during the Enduro World Series in Whistler in 1997.

The process of transportation proved to be more difficult than we could have imagined. Riding downwards on the tarmac became a dangerous task as the heavy cart, attached to the seat post by Da Kine surfing straps, pushed my bike towards with its full weight, and I had to steer very carefully to prevent ending in the ditch or in the forest. 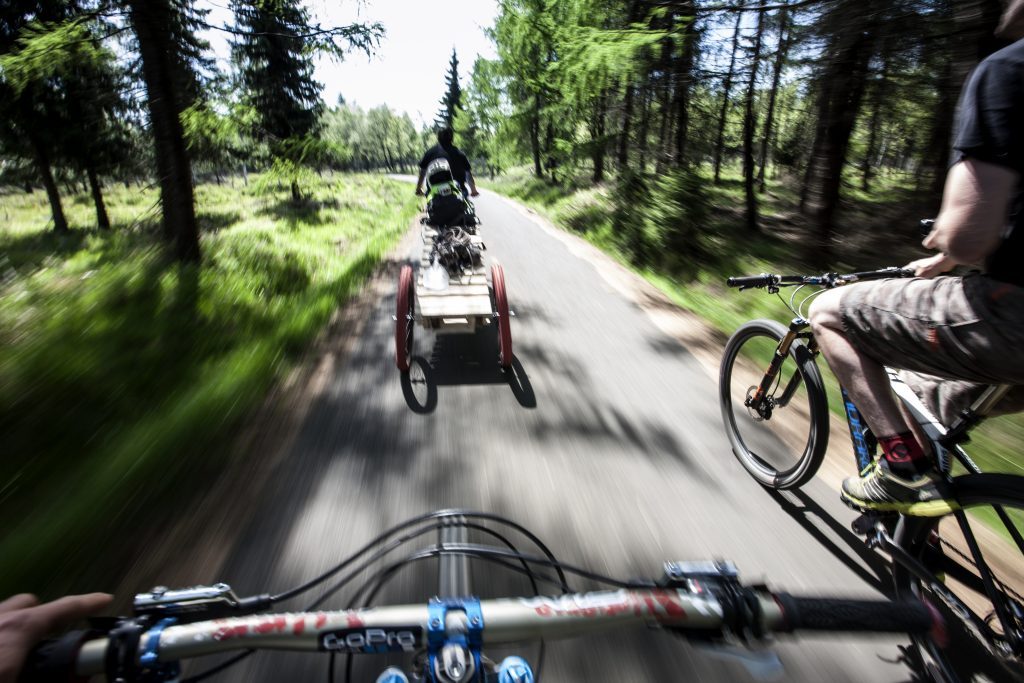 We also had to make a lot of stops just to check if everything holds properly  together and so everything altogether took us much more time than we originally planned. In the end, the tarmac road changed into gravel, so I had to tow the cart by myself for the rest of the trip.

Right before the first attempt, we cleaned the approaching trail and the landing. All the time we were under attacks of greedy mosquitos and ticks assaulting us from wet leaves on the ground. After a short break for a homemade meat loaf I tried the jump for the first time.

I repeated the jump for several times because the photographer wanted to shoot from different angles, including the view from 10 metres above ground, hanging on a rope from a tree. The operation took us almost one whole day to accomplish. The crew consisted of three people: Miloš Štáfek (photography), Marty Smolik (filming) and me (rider). Next time you’ll find an awesome photo in some magazine you’ll know it’s sometimes not only the result of hours spent in Photoshop.