The Netherlands is frequently cited as a cycling heaven on Earth, and now there’s another reason to believe so. While […]

The Netherlands is frequently cited as a cycling heaven on Earth, and now there’s another reason to believe so. While most other European countries are still avidly discussing how to incorporate cyclists into their urban plans and their visions of subsidised commuting in the near future, Dutch people talk less and work more.

Look at this gorgeous flying saucer-like steel, which should help cycling people to overcome the busy intersection by the cities of Eindhoven and Veldhoven without harm. Labelled as Hovenring, this stylish roundabout replaced the former level crossing here, which couldn’t cope with growing traffic. As Eindhoven City Council refrains from cyclist underpasses and didn’t want a level roundabout either, they asked Dutch bridge specialist ipv Delft to look into possible solutions. A circular cable-stayed bridge soon appeared to be the best option.

The bridge comprises a 70-metre-high pylon, 24 steel cables and a circular bridge deck and is made out of circa 1,000 tons of steel. The structure was finished back in December 2011, but because of unexpected vibrations caused by wind it had to be closed down. After solving the cable vibration issues, it reopened in June 2012. 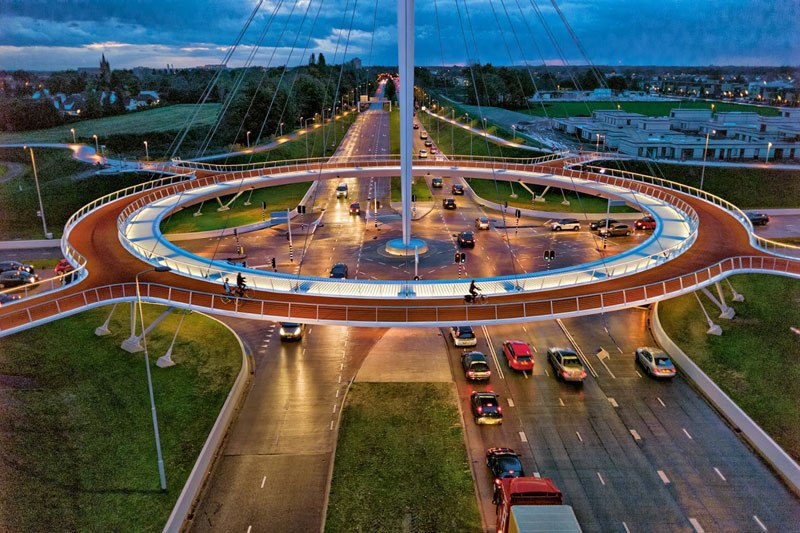 Befitting Eindhoven’s identity as the ‘City of Light’ (Eindhoven is home to Philips company), ipv Delft also made a lighting design for the Hovenring. The space in between counter weight and deck has been fitted with aluminium lamellas, translucent sheeting and tube lighting, which results in a clearly visible ring of light at night. Together with the illuminated pylon, the ring of light ensures the bridge’s spectacular appearance at night. The functional lighting is integrated into the railing, where LED-lighting illuminates the bridge deck and ensures facial recognition of the bridge users at the same time.

If you plan to travel to the Netherlands, don’t miss the opportunity to have a ride over one of the nicest ever made constructions exclusively for cyclists!

Pimp Your Ride for Urban Lifestyle

Urban: What Is New in the Big Cycling Cities in Europe?