All Murray Angus wants to do is go for a walk along the Sir John A. Macdonald Parkway without risk […]

All Murray Angus wants to do is go for a walk along the Sir John A. Macdonald Parkway without risk of injury.  So why has he taken to wearing a T-shirt with USE YOUR BELL written across the back?

Mr Angus told CBC’s Ottawa Morning programme that on a clear morning, on an uncrowded shared-use pathway, a bike smashed into him from behind.  When the cyclist realised that she’d injured him she was distraught and admitted it was her fault and, “…she had her head down, didn’t even see me”. 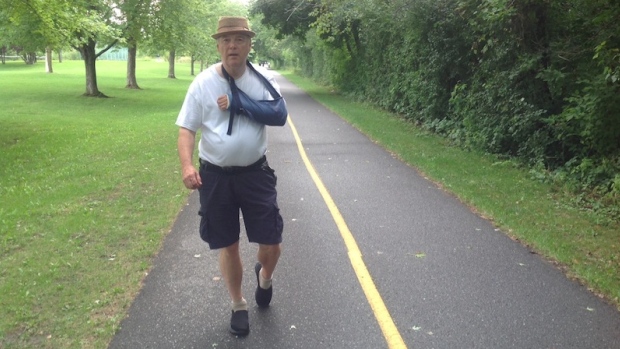 Recovering from his broken wrist, Angus became increasingly aware of how infrequently cyclists used their bells.  Angus took the matter in his hand and made his T-shirt to encourage locals to use their bells to warn passing pedestrians.

Ontario’s Highway Traffic Act states every bicycle must be equipped with a bell, gong, or horn and to use it, “whenever it is reasonably necessary to notify pedestrians or others of [your] approach”, so Angus is simply encouraging cyclists to act in the spirit of the law to avoid collisions. 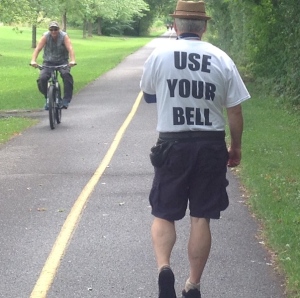 Angus reports that the response is mostly positive, with local cyclist Kringen Henein quoted as saying it’s a “good idea” to let people know you won’t be offended if they ding you as they pass.  But if a cyclist has their head down and doesn’t see you, would they have time to read your shirt?  Let us know what you think.

The Unbelievable Journey of Alessandro Zanardi: From F1 to Paralympic Gold