Sometimes miracles happen. Imagine you’ve been riding a bike as an amateur for over 20 years, and suddenly you get an invitation to join the ŠKODA WeLoveCycling team at l’Étape du Tour. Forget the fact that you have to participate in a four-stage MTB race at the beginning of the same week, or that you’ve recently suffered from the mumps, this is a once in a lifetime opportunity, and you go for it!

This year WeLoveCycling chose seven riders, the best from our readers who entered the l’Étape du Tour last month, to ride with us. Unfortunately, one of them was unable to join, but we rode for him in spirit! This year’s course replicated stage 20 of the Tour de France, the one you will have the chance to watch the pros fight for on Saturday. This is the story of one of our team riders, who took on the most intense amateur cycling race in the world! 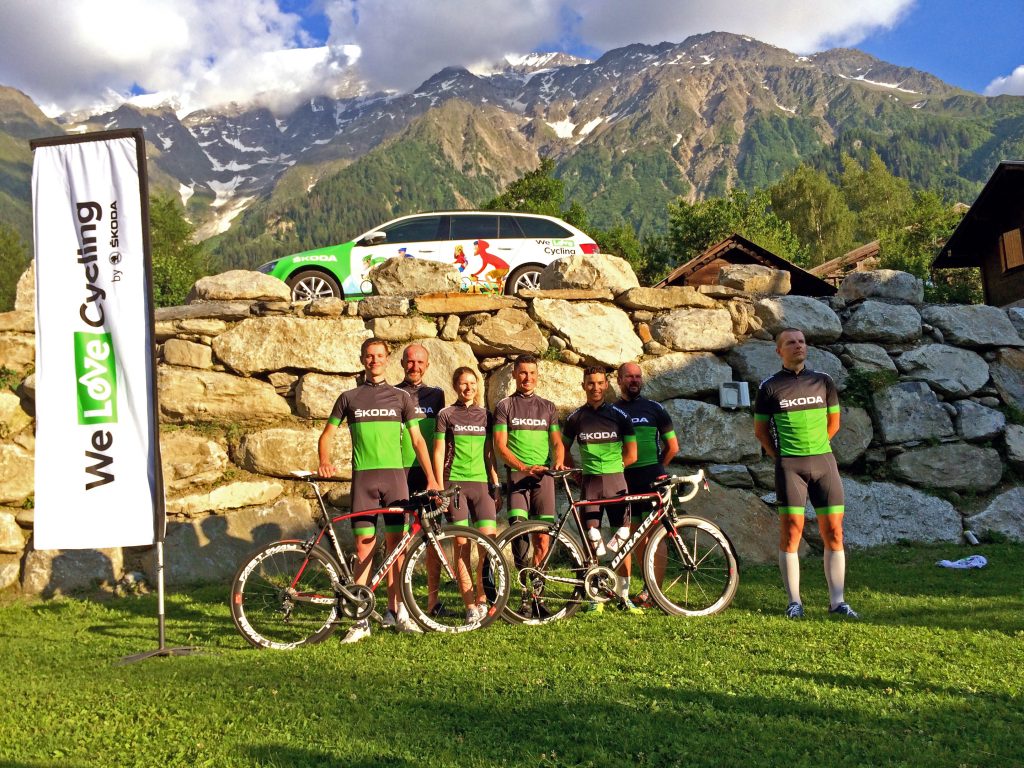 As a frequent contributor to WeLoveCycling, I was thrilled to be a part of the team for this year’s l’Étape. It all began at the Prague airport with a reunion between friends. Eager with anticipation, I was thrilled when I spotted Paralympic cyclist Jiří Ježek with his wife Sona. It had been almost nine years since we’d seen each other, when I shot a documentary about him. Now, we were on the same team and I couldn’t wait to ride with him. Jiří was a special guest of ŠKODA and I was there to observe and report. His spirit amazed me the same way it did nine years ago, and his enthusiastic attitude was still contagious. He lost his leg at the age of 11, but when it comes to cycling, he is a force to be reckoned with. With 11 Paralympic medals, including 6 golds, I wasn’t surprised that he pulled off an impressive 165th place out of more than eleven thousand.

We were able to catch up on our journey over, and arrived at the hotel Du Bois in Chamonix full of energy and excited to meet the other riders. This was the moment when the group of strangers started their rapid transformation into friends. All the winners and the core of our team – Tomáš (SVK), Ludek (CZ), Pavol (PLN), Ludmila (FR), Kyle (GBR) and Ulf (DE) got their start packages, race numbers, and quickly went to take photos of the beautiful scenery of Mont Blanc. 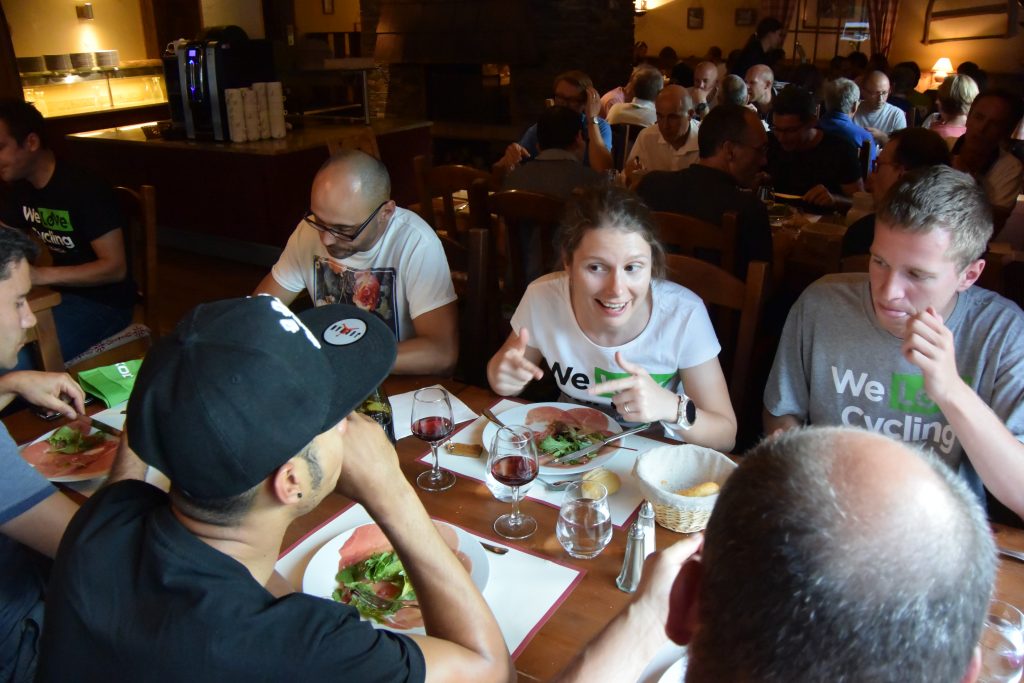 Over dinner, we were told the schedule for the following day. I was shocked to hear that breakfast was at 4am, but had to remember I was living the pro life now. That being said, the wake-up was easier than expected, my adrenaline was pumping in full force and I was ready to hit the road.

The excitement only grew as the huge crowd formed at the beginning of the race. Soon we were off and the first five km of the course were fast, with an average speed of 45 km/h. That was a bit much for me to keep up with, and I dropped back from my initial group. Soon after we approached the first hill, with a 6 % ascent, it was an wicked reality check. I even thought something might be wrong with my shifter, only to realize that I was already using the lower gear! Knowing that all the upcoming hills were going to be even steeper, I had to really talk myself up to keep my spirits high. Ulf, who lives on the German-Dutch border with no hills, was struggling along with me and we managed to make it. 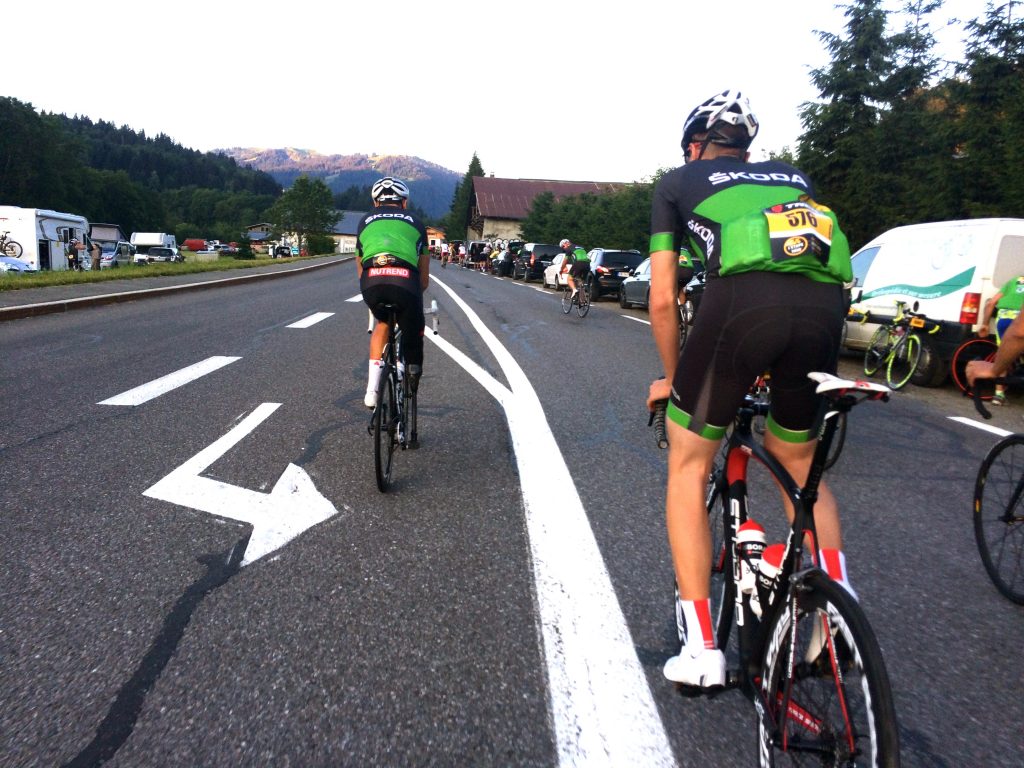 We were rewarded with a brief descent then the rise to the Col de Aravis had begun. It was exactly like what I remembered seeing on TV, there were spectators everywhere. In the middle of the route I managed to overtake Kyle, who seemed to be strong and lightweight before the race. It was a small victory and gave me the enthusiasm I needed for the next push. Kyle was soon back on my heels though, and I had to put even more into the next ascent to keep him off. The next big descent was tough and there was nervous energy in the air. I managed though, and was glad was the 40 km of flat road waiting for me at the bottom.

Then it was time for Col de la Joux Plane. The first two kilometers of this highway to hell were hot and steep. I could hardly keep my hands on the handlebars due to sweat and my head was spinning. I kept pushing though, and two km from the top, I heard the Czech/Slovak “Ahoj” as I overtook Tomas. It was another shot of energy for my legs and I managed to conquer the next climb before coming into the final descent into Morzine. 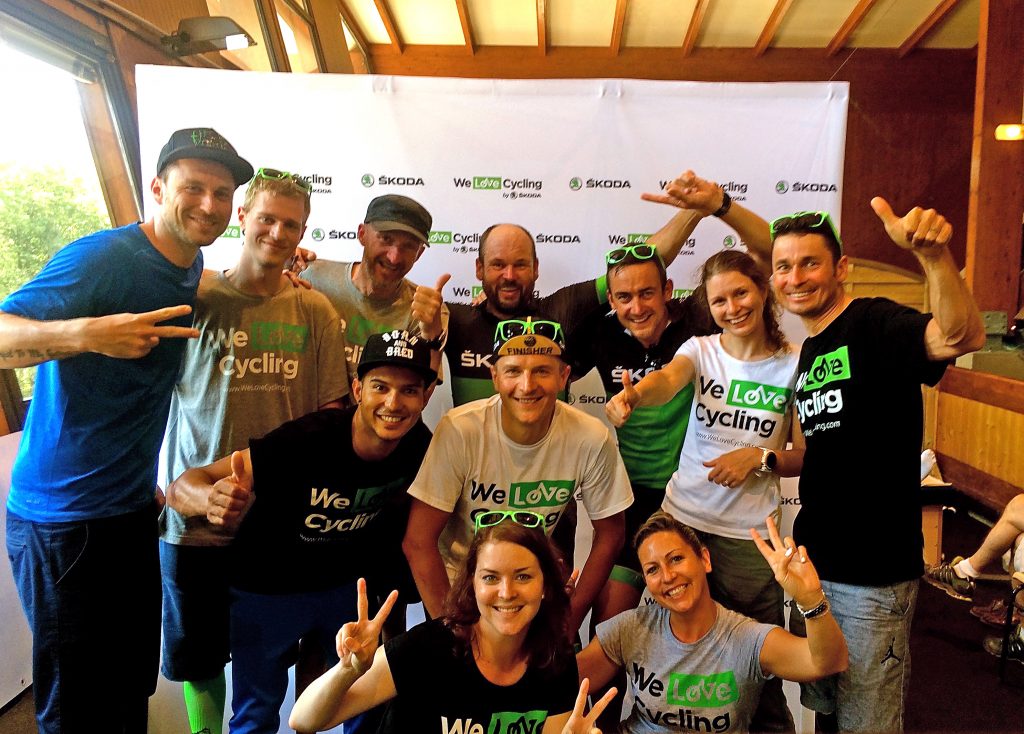 At the finish line we were greeted by people from ŠKODA who were eager to hear our impressions and get some photos. Later on, our team all gathered together to share our tales of pain and suffering. The team spirit was strong and we all felt like old friends after completing this challenge together. We celebrated that evening with a delicious meal and a view of Mont Blanc. Our heads spinning with incredible memories, surrounded with feelings of comradery and achievement, we felt like we were on top of the world. And we truly were.

L’Étape du Tour: How much pain you can take?