The crash on his mountain bike was massive. When he regained consciousness, Michal Kosík quickly found things were not right. “As a result, I broke my back and became a paraplegic,” he describes the accident which happened 13 years ago. Many things have changed in the life of this Czech biker from Pilsen since then, except his eagerness for riding.

It’s not easy to cycle once you’re sentenced to a life in a wheelchair but some people found a way to deal with it. Firstly, Michal built his own off-road quad bicycle and got back on the wheels. The only disadvantage of a quad is that it’s mostly intended for a downhill riding and so it requires either a cable car or someone else who gets you on the top of the hill.

That’s why Michal opted for more freedom and acquired a hand bike. Basically, it’s a tricycle with two coasting rear wheels and one steerable front wheel, powered by your hands. This machine is eventually going to make Michal racing again.

“I have some dreams, which I don’t want to talk about at the moment, but for sure I’m resolved to race only as much as possible. At the beginning of the upcoming season, I’ll take part in cross-country races on tracks ranging in length from 20 to 30 kilometres. We have a national cup for handicapped riders in the Czech Republic with approximately 20 competitors starting regularly. Some races are also added to big cycling events for all kinds of bikers,” Michal explains. 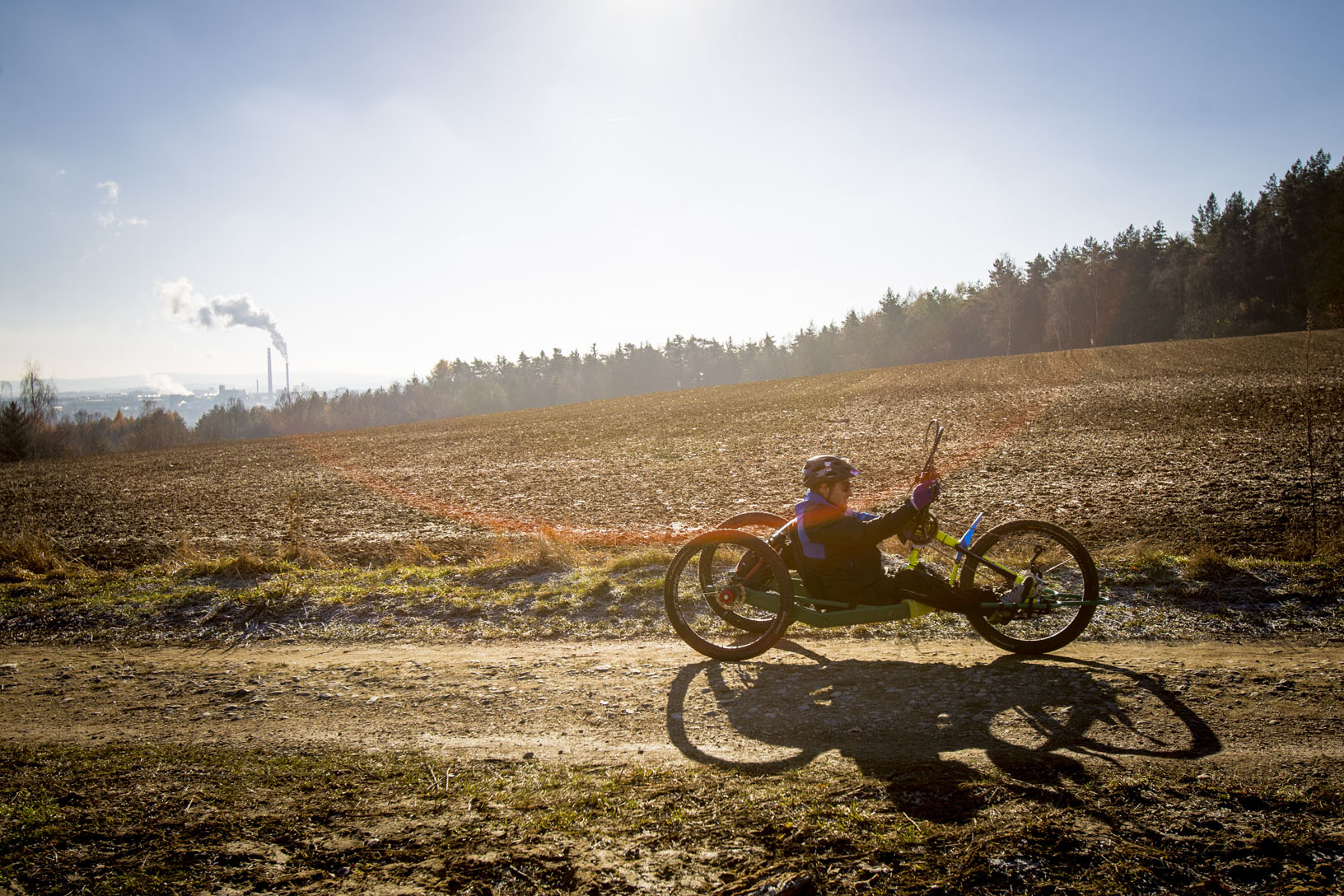 Since this September, he’s already accomplished 1000 kilometres. Although he’s adjusted his present training for shorter cross-country tracks, his long-term vision is all about road racing at the most prestigious events of the world. The best hand cyclists are in their early forties – that makes a bright prospect for Michal who’s turned 33 this year. A big support was given to him by his very good friend Radovan Civiš who finished 8th at the Paralympic games in Beijing.

We visited Michal on his local trails in the suburbs of Pilsen, a capital city of Pilsner beer, to see him during his daily training. According to Michal there’s a great network of cycle paths in Pilsen, and that’s why he can easily avoid busy roads when he wants to go out. Normally, he combines riding on tarmac roads and off-road trails. 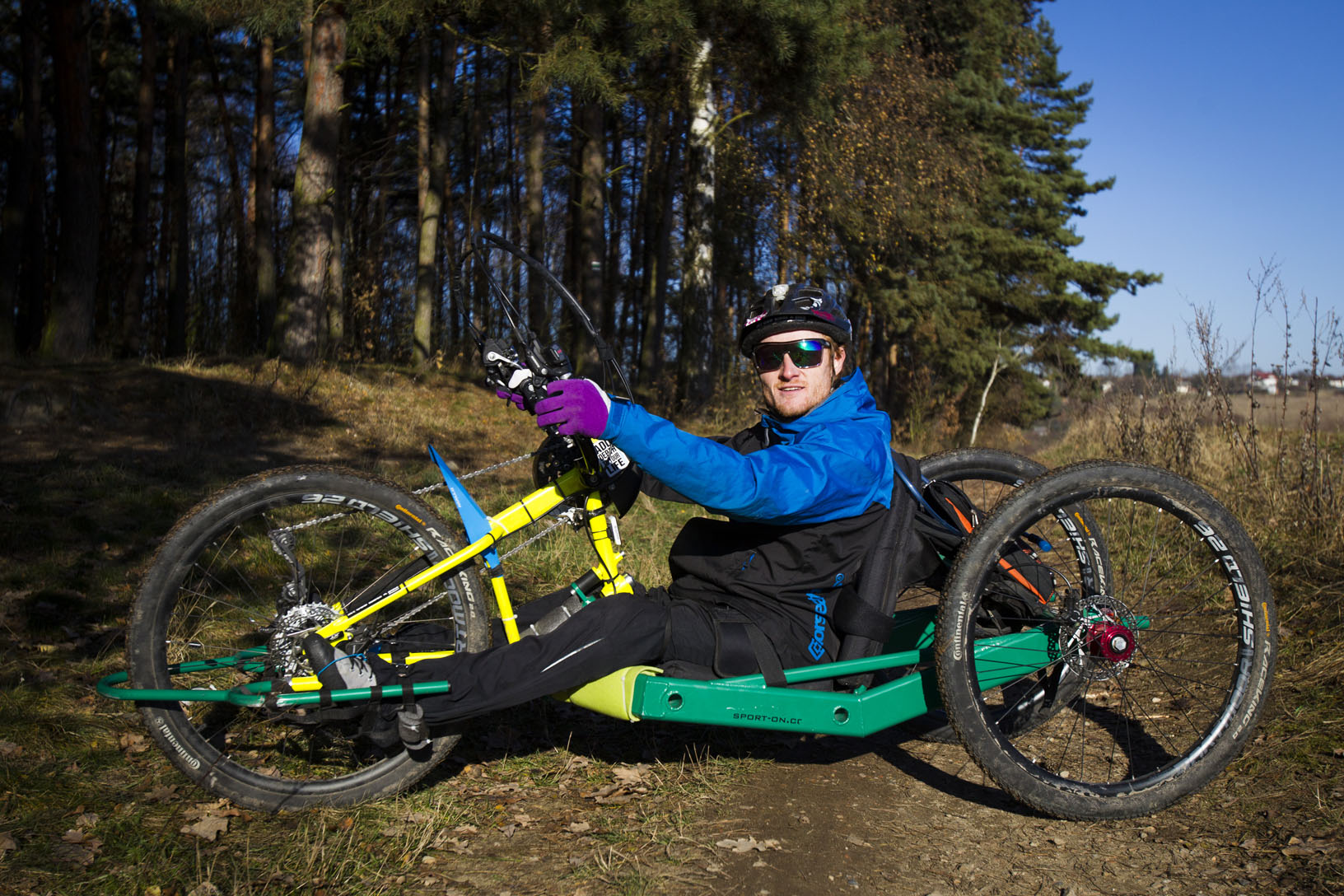 When the weather turns bad, he does the same other cyclists do. “I just carry on riding – as there’s no bad weather, only bad apparel,” Michal explains. And what does he do when he gets a puncture? Actually, this hasn’t happened to him yet, but the thing wouldn’t be much different from a situation when he gets a flat with his wheelchair. Michal always travels with a spare tube, so he just makes a stop to sit on a bench somewhere near and he tries to change the faulty tube for a new one.

Hand cycling is the most demanding on pectorals and back muscles. “When I ride, it’s like doing bench press permanently for two or three hours,” Michal says. No wonder his back muscles stiffen quite often. Luckily, his girlfriend Tereza is as physical therapist. That’s also how they met during his recovering period following his injury. “Many things in my life would be much harder for me without her and I’m really happy to have her by my side,” Michal says.