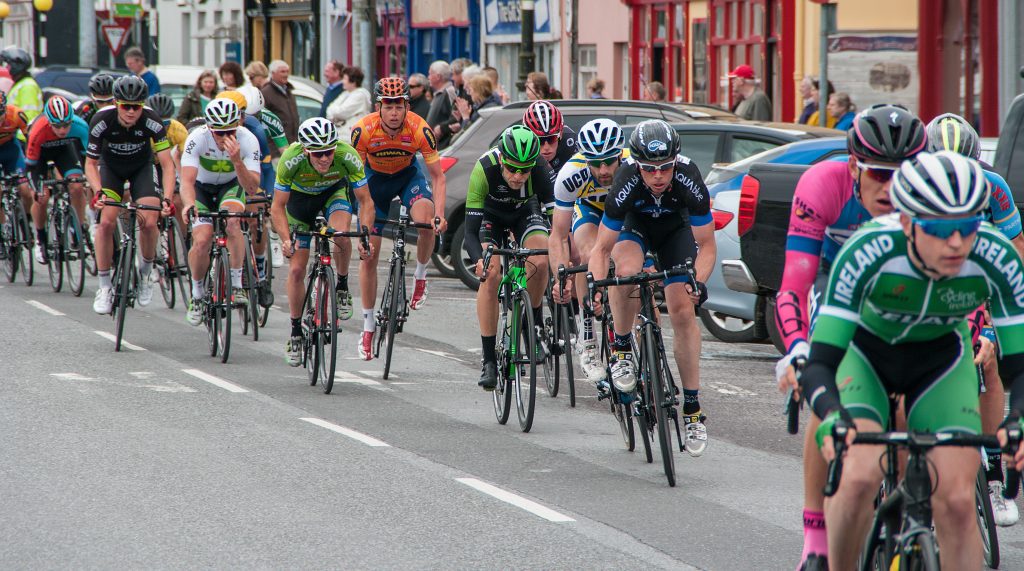 For a tiny island nation, we’ve certainly made our mark on the cycling world – both through our riders and our roads! Here’s four golden moments that we won’t forget in a hurry…

In 1987, Roche became just the second man to win cycling’s Triple Crown of the Giro d’Italia, Tour de France and Road World Cycling Championship – and remains the only Irishman to ever have this monumental achievement to his name.

Taking three stages at the Giro, and three more at the Tour De France, expectations were that his World Championship efforts would be focused on helping the cause of his teammate Sean Kelly.

Instead, the Dublin-born rider found himself as part of the breakaway group –and with Kelly slowing, attacked to cement his place in cycling’s record books.

Kelly was the world’s number one ranked road cyclist for five years from 1984 to 1989, and while his consistency meant he landed no fewer than eight points class wins across the Tour de France and Vuelta de Espana, the holy grail of an outright win at a Grand Tour remained elusive.

That changed, however, in 1988, as Kelly kept in touch with race leaders through the mountains before overhauling a 21-second deficit on the penultimate stage’s time-trial to claim the Maillot Roso. While he continued to compete for years after, it was the crowning achievement of a spectacular career.

July 1998 saw the Tour De France beginning in Ireland for the first time ever, and it’s one of the many reasons that the Tour De France itself has got a significant spot in the heart of every Irish person – irrespective of whether they’re diehard cycling fans or not.

Beginning in Dublin city centre, where thousands turned out to support the riders, the tour then brought the peloton down through grueling conditions in the Wicklow Mountains. They continued through Enniscorthy and then on to Waterford and Cork, completing three incredible days in the sporting history of our nation.

It was the only time in the tour’s 104-year history that the tour started in Ireland, but we’re keeping the faith that we will one day see the yellow jersey whizzing past us again!

The Grande Partenza – or Big Start, for those who don’t parla Italiano! – of the world famous Giro d’Italia came to Irish shores back in 2014. For three days, the the crème de la crème of professional cycling competed on our roads; it was the first time the Giro’s kick-off was hosted outside mainland Europe, and one of only 10 occasions since 1909 that the race started outside Italy.

The first two stages in Northern Ireland, with Stage Three seeing riders go from Armagh to Dublin. Up to 300,000 fans lined the route for that third stage, in what was another sterling showcase of Ireland as a world class cycling destination.