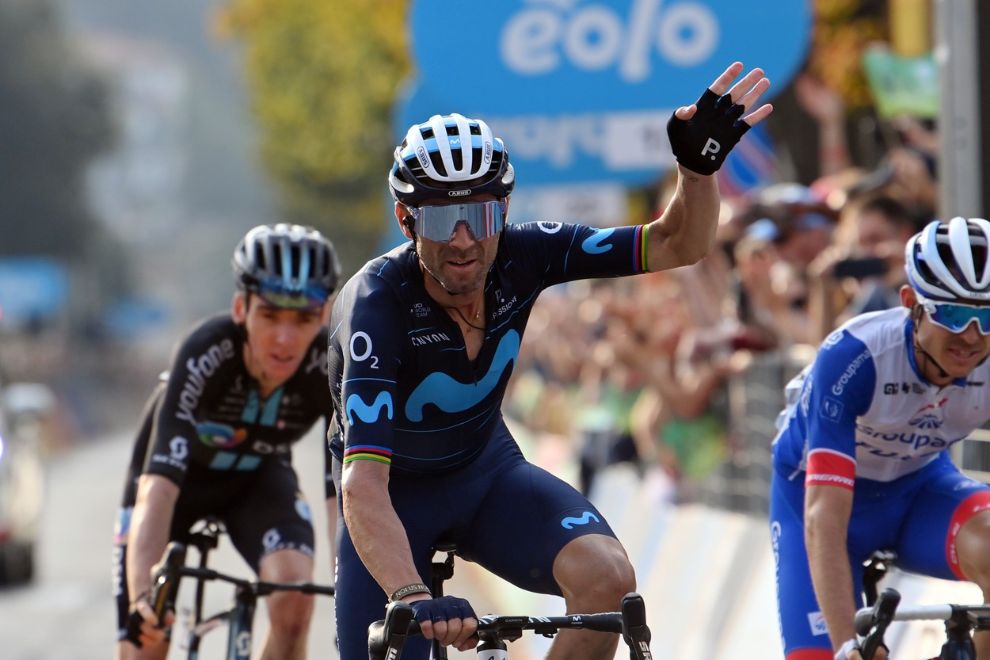 Alejandro Valverde of Team Movistar is one of the most iconic, successful, and well-respected professional cyclists of our time. After 20 years in the pro peloton and with 134 victories to his name, ’El Bala’ (The Bullet) crossed the finish line as a pro for the last time at the 2022 edition of the Il Lombardia in front of thousands of fans and the media.

Despite his 42 years, Valverde, who is still in top form, was considered a favourite to win. He was hoping to add one more victory to his results in what would have been an incredible ending to his already fairy-tale career.

Valverde initially announced his decision to retire in 2020 but the effects of the pandemic changed his mind. The Bullet didn’t want his legacy to end on empty roads with no fans. His love of the sport and the hopes of winning an Olympic medal in Tokyo, a result missing from his extensive palmares, spurred him on.

While he finished a disappointing 42nd in Tokyo, he was still flirting with Grand Tour stage wins. Valverde finished second on Stage 15 of the 2021 Tour de France and 24th overall. Not too shabby. As a result, he added a final year to his racing program with the Il Lombardia as ‘la última bala’, or his last bullet.

While at the Vuelta, it was decided Valverde would be absent from the 2022 World Road Championships in Wollongong, Australia. With Team Movistar flirting with relegation, they needed Valverde in top form for end-of-season racing to score as many UCI points as possible.

This decision was contrary to the wishes of the Spanish National Team but having jet-lagged Valverde on his return from Down Under wouldn’t boost Movistar’s chances for success in keeping their WorldTour standing. Too bad for Valverde, as it would have been the last chance to repeat his 2018 World Championship title.

Movistar’s decision to not send Valverde to Worlds paid off. There were three races on the calendar in the weeks leading up to Il Lombardia and Bala showed he was still hungry for wins and ready to go out with a bang.

He finished second at the Coppa Agostini, fourth in the Giro dell’Emilia after working for his teammate and eventual winner, Enric Mas, and third at the Tre Valli Varesine. Valverde was back in form, pleased with his performance after a lacklustre showing in his final Grand Tour at the 2022 Vuelta where he suffered a hit-and-run accident prior to the start, coupled with illness.

A Spaniard ending his career in Spain at the Vuelta would have been a logical choice but the results weren’t there. Il Lombardia had been the traditional last race of the year for Valverde. He liked the course, and he had proven to do well in the past. He first appeared on its starting line in 2003 and landed on the podium multiple times thereafter, finishing fifth in the 2021’s edition, and three times in second place in 2013, 14 and 19.

This mythical Italian race with deep roots in cycling history is the fifth and final Monument of the year. 2022 marks the 116th year and brings the Classics and Monuments of the season to a close. The prestige, media coverage and fans this event draws make it an exceptional race to end a career. So much so, Vincenzo Nibali did the same, as well as Dan Martin in 2021.

Also known as the “Race of the Falling Leaves” because of its October date, the first edition took place in 1905 when it was called the Milan-Milan. Racing action this year covered 253 km between Bergamo and Como. Every WorldTour team was present, including the UAE Emirates and Tadej Pogačar who won the race last year. Pogi pulled off a repeat performance by out-sprinting Valverde’s teammate, Enric Mas, to take the victory.

Valverde didn’t win but he finished in a more-than-respectable sixth place. Pogi had his time in front of the media but the spotlight quickly turned to Valverde and Nibali. And Valverde was pleased to savour the team’s celebration of a second-place podium. Not a bad way to end a career.

What’s next for El Bala?

While his definitive plans have yet to be officially revealed, it’s rumoured he won’t be going too far into unchartered territory. Other than animating and winning races, his age and extensive experience in the pro peloton have moulded him into an oracle on the subject.

He has already taken on a natural teaching role for the younger, up-and-coming riders. And I bet this continues off the bike, still wearing Movistar (or their morph-team) colours. He’s quoted as saying he’s retiring at the best time, leaving cycling at the ideal moment, at his maximum level. And that he gave it everything so the fans could enjoy cycling. I agree with him. How about you? What do you think Valverde will do next?