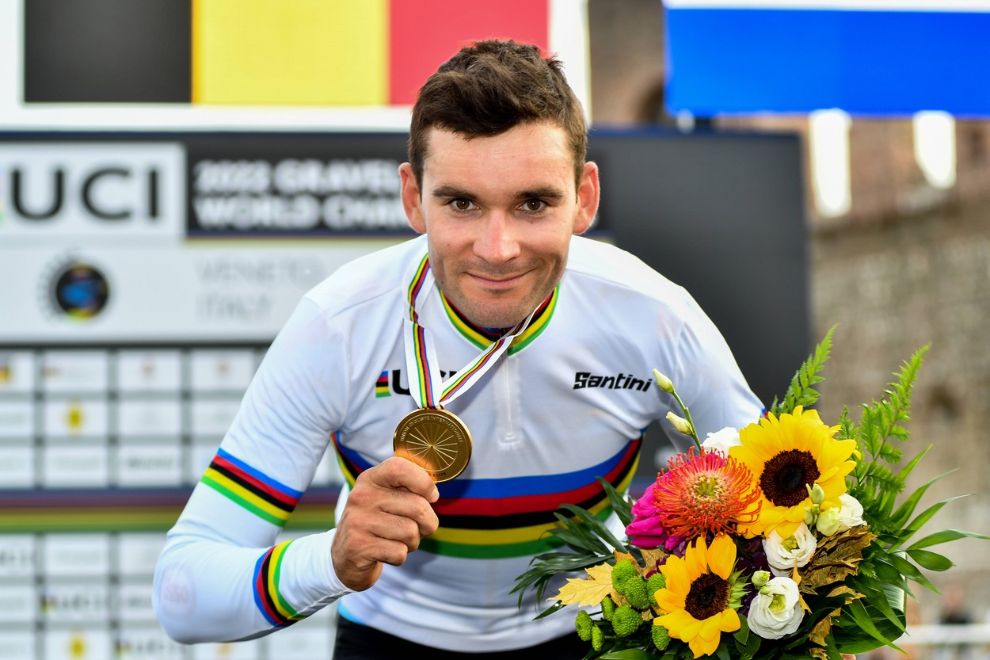 Gianni Vermeersch (Belgium) won the inaugural UCI Gravel World Championships after spending over 140 km in a breakaway with Daniel Oss (Italy). He distanced the Italian on the final lap of the circuit in Cittadella, Italy. The battle for third place was decided in a sprint and won by Mathieu van der Poel (Netherlands).

Vermeersch often faced both Van der Poel and Wout van Aert on the cyclo-cross circuit, a fact denying him the rainbow jersey for quite a while. However, this time around everything clicked in place. His endurance allowed him to break away with Daniel Oss and his cyclo-cross skills proved to be decisive when he pulled away from the Italian.

“It was one of the biggest chances for me to once become a world champion. I can’t believe I’ll have the rainbow jersey in my house,” Vermeersch said.

“The last single track was perfect for me, it was like cyclo-cross. I just went full into it, and I heard metre per metre I gained some advantage on Daniel, so I just went full from there to the finish.”

“I was hesitating a bit because I knew the final 500 m was perfect for me but there was a group coming from behind and we heard their gap was only 2:30, so I wanted to go full on that part to get the advantage,” Vermeersch said of his race-winning attack. “When [Daniel Oss] was dropped, I kept going.”

Despite the fact Oss and Vermeesch were not wearing earpieces, they were able to pick up regular updates on the time gaps, which, at one point, grew to 5:30. With the bell ringing and 27 km to go, it went down to four minutes. Nevertheless, it was clear at that point that it was one of the two who would win the world title.

“We worked together because there was a chance for both of us but it was hard for me to follow him on the technical stuff, I had cramps,” admitted Oss.

In the end, the Italian easily defended the silver. Van der Poel and Van Avermaet finished over half a minute later with the Dutchman beating the Belgian for the bronze.