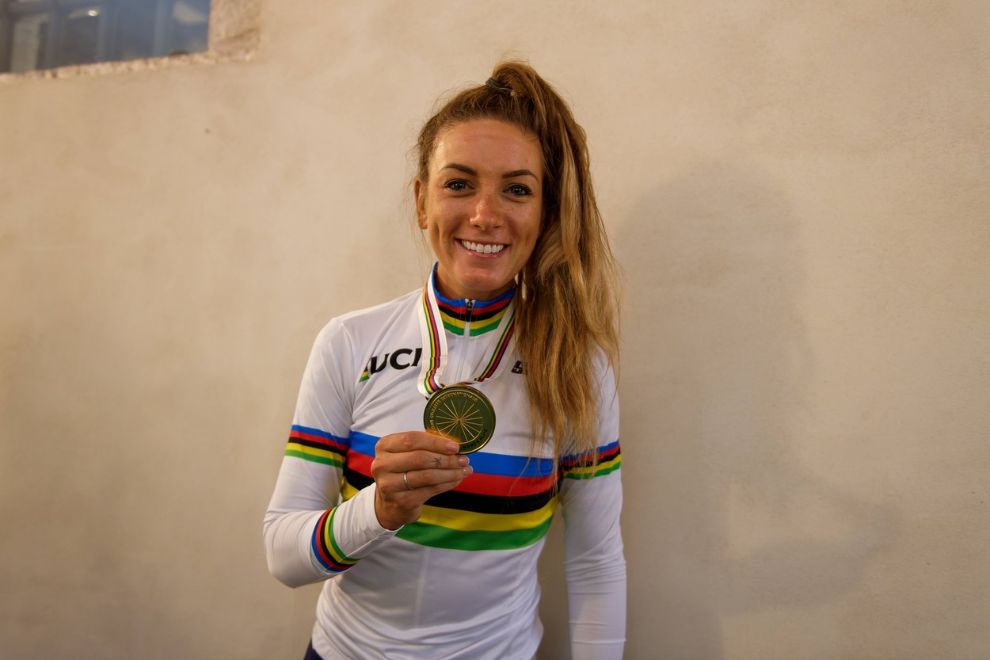 “I think I did the perfect race.”

Saturday marked the first-ever UCI Gravel World Championships, and the formidable Pauline Ferrand-Prévot claimed the inaugural title. Riding to victory in Veneto, Italy, the French rider captured her fourth world title of the season and confirmed that she is indeed one of the most versatile cyclists of our time. The event started in Vicenza, was 140 km in length and saw 40 starters lining up to tackle the course.

Ferrand-Prévot was a favourite going in, and she didn’t disappoint her fans. An impressive display of confidence and tactics, she outsprinted Swiss rider, Sina Frei, to the line after they broke away from fellow speedsters Chiara Teocci (Italy) and Jade Treffeisen (Germany) with 500 meters to go.

A sweet number 10 for Ferrand-Prévot

Ferrand-Prévot’s success was an impressive milestone for the 30-year-old rider—marking the tenth world title of her career.

“I think I did the perfect race,” she said following the race. “In the beginning, it was quite fast and technical, so I just tried to stay at the front. After that, the Italian girls really rode, and they came back. So then I said I need to recover, just to drink, to eat.”

“After that, they attacked, and I tried to go in the break. Finally, I could stay at the front in the break. I tried to motivate the girls to ride with me. I knew if it was a sprint finish with a small group, I would be able to win. So it was just a perfect tactic for me, and I can’t believe I won today.”

“I was feeling strong, and I knew I had also to turn quite good. Otherwise, the other ones would say, ‘okay, we don’t ride with you,’” she explained. “So I was really trying to motivate them and to just keep pushing. It worked perfectly, and in the end, I knew I had to be in the second position and try to sprint, and I made it. I can’t believe it, because it was exactly what I waited for.”

How the action went down

The race was fast from the beginning, with Ferrand-Prévot making her intentions clear. As a result, the contenders were thinned down early, and it was a small pack that would ultimately battle for the top spot. With 120.7 km remaining, Ferrand-Prévot was in the clear with Sina Frei (Switzerland), Chiara Teocci (Italy), Annabel Fisher (Great Britain), Lauren Stephens (USA) and Sofia Gomez Villafrane (Argentina).

It was a fierce and determined pack but Teocci made a go for it by launching a solo move. Her plans for advancement were quickly foiled, though, as Ferrand-Prévot, Frei, Stephens, and Jade Treffeisen swiftly made up the difference. With 53 km remaining, it was a group of five who were holding their own 40 seconds ahead of a group of chasers.

It was apparent that the urban sector zapped a lot from several riders, and once the pack reached the 40 km mark, the five leaders were 1:33 ahead of a 14-rider chase group. The leading crew consisted of USA’s Lauren De Crescenzo, Italy’s Barbara Guarischi and the British duo Annabel Fisher and Hayley Simmonds. Stephens tired, though, and was subsequently dropped. There were now four out front, and despite a determined group of chasers, the leaders kept a 1.11-km separation with 25 km remaining. The determined advancers continued in their pursuit, however, and were just 38 seconds behind with 15 km to go.

Ultimately, Frei and Ferrand-Prévot broke from the group at the 500-meter mark. The Swiss rider opened up the sprint but Ferrand-Prévot was having none of it. She kicked things into high gear and sped past with 150 meters remaining.

An impressive introduction to the world of gravel

This past weekend’s events serve as a testament to gravel’s popularity and a sign that it will only continue growing. Once a niche pursuit, this physically demanding off-road discipline has proven that its racing is plenty watch-worthy. While maintaining a grass-roots feel, gravel has proven its ability to inspire interest among riders and fans alike. Hats off to the always impressive Ferrand-Prévot, and we look forward to more gravel races in the future!