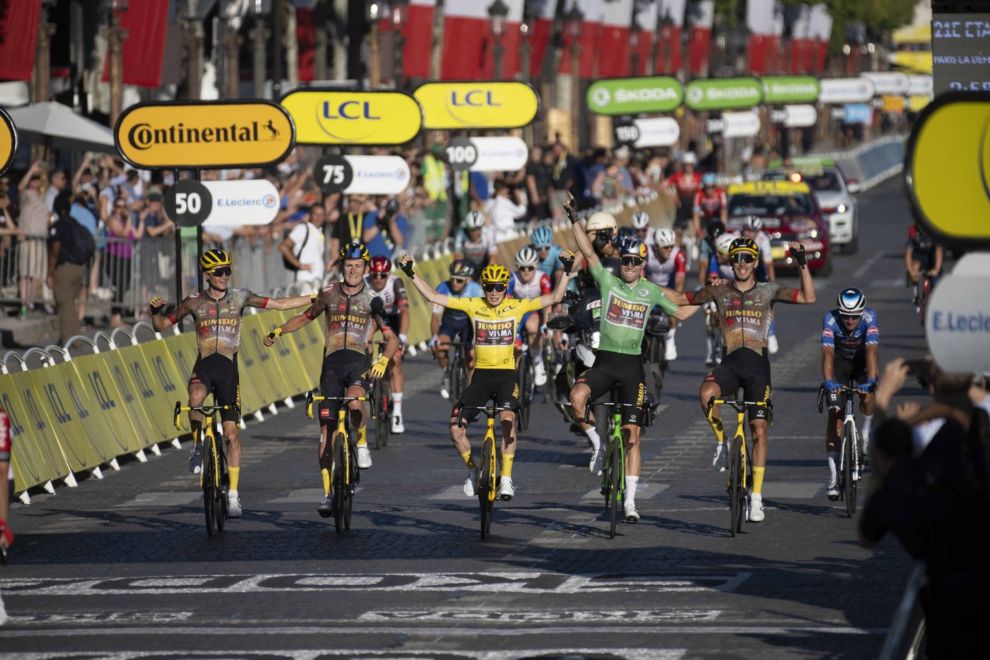 This year’s Tour de France has already been hailed as one of the most exciting and entertaining ever run. There was not a single stage without incident, drama or hard racing. In fact, there was so much hard racing that this 109th Tour was the fastest ever run, with an average speed of 42.457 kph for the 21 stages.

One reason for this record was surely the layout of the race, with many hilly stages perfect for breakaways. There were breakaways on just about every stage, leading to breakneck racing practically without a pause. “The way we’re racing, every day full gas… that’s crazy, man,” third-place GC finisher Geraint Thomas (Ineos Grenadiers) told Eurosport.

The three weeks were crammed with so many indelible moments that it was easy to understand why the Tour is widely considered one of the great sporting events on the planet. To name just a few of these incidents:

1.  Stage 11, when Jumbo-Visma played cat and mouse with two-time Tour champion Tadej Pogačar (UAE Team Emirates), as team co-leaders Jonas Vingegaard and Primož Roglič took turns breaking away. Pogačar was forced to respond to every attack, wearing himself down. When Vingegaard attacked on the climb to the summit finish on the Col de Granon, he could not keep up and the Dane took a lead that he would never relinquish.

2. The tricky descent from the category 1 Col de Spandelles on the 18th stage: After Vingegaard nearly crashed, Pogačar, racing with him, went down on the roadside gravel. Vingegaard waited for his yellow-jersey rival to recover. Their subsequent handshake reminded us all of what sportsmanship really means.

3. Pogačar’s repeated attacks in the Pyrenees after he had fallen behind Vingegaard, and the Dane’s stubborn refusal to cede a second to his rival.

4. Stage 19 and the ascent of the Tour’s final climb to the summit of the Hautecom: Škoda Green Jersey winner Wout van Aert, who was leading Vingegaard up the mountain, with Pogačar on the latter’s wheel, suddenly accelerated and the Slovenian was dropped again, sealing Vingegaard’s GC victory.

These were merely the most significant of the many twists and turns in a race that never failed to captivate and surprise.

The Tour de France lives up to its reputation – and occasionally surpasses it.

Pogačar is not the second coming of Eddy Merckx, not yet, anyway. He is still a superb rider who needs a team worthy of his talents and ambition. Though several of his UAE Team Emirates teammates rode superbly on occasions, such as Brandon McNulty and Rafal Majka, the loss of George Bennett to Covid on the eve of the Tour was a severe blow, and he could never muster the firepower to counter Jumbo-Visma.

Jumbo-Visma are the new Team Sky. They won six stages, including three of the last four, and three jerseys (yellow, green, polka dot). If that isn’t dominance, then I don’t know the meaning of the word. If they are able to keep their current riders, they will be a major force in the race for at least another three years. “The way we destroyed everyone on the two hardest stages I will remember forever,” van Aert told Eurosport, and added: “The whole team was really strong for the whole race. We are proud of that.”

This is one we had already learned but were reminded of in spectacular fashion in this Tour again: As former green jersey winner and current Eurosport commentator Sean Kelly put it: “WVAOMG, or Wout van Aert Oh my God!” The 27-year-old Belgian superstar won three stages (he also finished second four times), easily won the Škoda Green Jersey, received the Super-Combativity award and was a major factor in the mountains. As Vingegaard himself said, “He is the best rider in the world.”

Vingegaard had the best team and his team had the best strategy but the 26-year-old Dane also had the heart and the legs to fight off Pogačar’s repeated and increasingly desperate attacks in the Pyrenees. He never wavered, he never weakened and, most important, he never lost belief in himself and his team. When he waited for Pogačar after the Slovenian had crashed, it was more than an act of sportsmanship; it was a statement of self-confidence.

I am certain that Pogačar will come back from his defeat stronger, smarter, and even more ambitious – and, hopefully, with a better team. As he put it in Paris, “Not winning… means I have even more motivation for the next year but I just enjoy the spirit of this sport as much as I have always done. We have a really good couple of years of TV ahead of us with the duels between Jonas and myself.” I agree. If he and Vingegaard stay healthy and ambitious, they will likely dominate racing for the next few years (though we are all impatient for the return of Egan Bernal). They were heads and shoulders ahead of the rest of the riders, with Thomas more than 7 minutes adrift in third place and Frenchman David Gaudu (Groupama-FDJ) a whopping 13 min 39 sec behind in fourth.

So I am already looking forward to next year when the two best Grand Tour riders in the world will resume their rivalry. I think cycling fans are on the verge of a Grand Tour golden age.