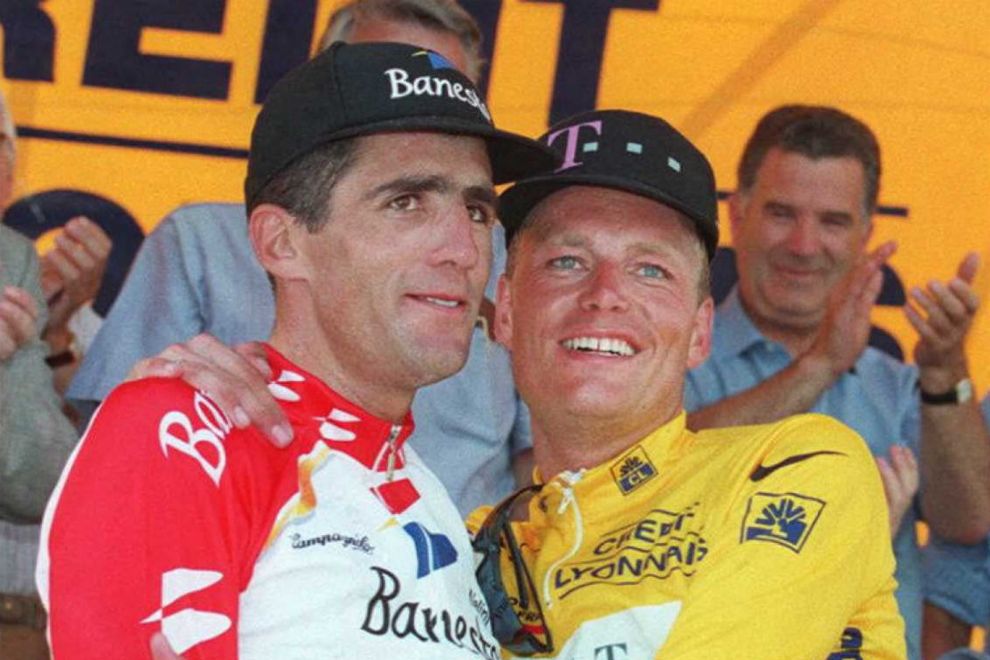 Coming into the 1996 Tour, Miguel “Big Mig” Indurain was the favourite. He’d won his fifth Tour the year before and wanted to be the first person ever to win this Grand Tour six times. Bjarne Riis was one of the few daring challengers. His performance in stage nine and stage 16 showed how exciting racing can be.

In stage 16, Riis did what we’ve never seen before or since, and dethroned the great champion.

Riis first raced in the Tour de France in 1989 but his breakout year didn’t come until 1993 when he took a stage win and fifth in the general classification. He got a stage win again in 1994 and managed to wear the yellow jersey for a day in 1995, finishing third overall. He was leading Team Telekom in the 1996 Tour de France.

The 1996 Tour started with a time-trial prologue where Riis and Indurain almost tied, being 11 and 12 seconds slower than the winner Alex Zülle, respectively. The following five stages were the playground for the sprinters such as Mario Cipollini and Erik Zabel. Before the climbing started at stage seven, Riis and Indurain were right next to each other in the general classification in seventh and eighth place, losing four minutes 16 seconds and four minutes 17 seconds, respectively.

Indurain looked good on the first two major climbs of the Tour at stage seven, signalling to the others that they were competing for second place. But then with about three kilometres to go to the finish, the unbelievable happened. Indurain was in trouble! He was dropped by the group that included most of the general classification contenders, including Riis. He ran out of food and was bonking.

Indurain got so desperate that he was signalling to other riders that he needed food. They took pity on him and gave him some. It was a shock to all that such an elementary error was made by such an experienced rider. Indurain finished over four minutes behind the stage winner and had given up a lot of time to his main competitors. Riis was in fourth place after this stage, only eight seconds behind the yellow jersey while Indurain was 14th,with a gap of three minutes and 32 seconds. After five years of one-man domination, it finally felt like the Tour was truly open for anyone to win.

The next stage was an uphill individual time trial to Val d’Isère. Indurain, a time trialist who could usually climb very well, moved up to 11th place but lost almost another minute to Riis.

In stage nine, Riis began attacking almost from the start. His first three attacks were answered, but the fourth was too much for the others. He was 20 seconds ahead of the chase group at the top of the first climb and he extended his lead on the final climb. He captured the yellow jersey with his amazing performance that day. Miguel Indurain’s deficit increased to four minutes 38 seconds, but over half of the Tour was still to play out.

During the next couple of stages Team Telekom controlled the race for Riis, letting breaks of non-contenders get away but diligently repelling the real threats. This meant that the final battle would be fought in the Pyrenees, starting with stage 16, which became one of the most astonishing stages in racing history.

Stage 16 was 199 kilometres long and culminated in a long and hard climb to Hautacam. The best riders were still together at the start of the climb. As soon as the climb began, Alex Zülle took off. Richard Virenque dragged the elite climbers up to him. With nine kilometres to go it was Riis who tested the others with a probing attack and Indurain was able to stay with him. Riis turned the power down a bit. He went again and this time only four riders could stay with him. After that he did something completely unexpected.

He slowed down a bit, pretending he was in trouble and rode next to the others, looking carefully at each of his competitors. When he was sure that they were all at their limit, he rocketed up the hill, leaving them in the dust. He finished alone, two minutes and 28 seconds ahead of Indurain. This was an exceptionally risky manoeuvre. Riis gave up position and momentum on a steep mountain surrounded by the finest climbers in the world. What a display of confidence in his abilities!

Stage 17 was the last mountain stage and the last stage where Indurain and other competitors could realistically make enough time on Riis. There were seven climbs in total and five of those were category two or higher. On the first hard climb, Riis kept the pace high, which thinned the pack to only 11 riders. Richard Virenque and Laurent Dufaux kept pushing the tempo and Indurain was unable to answer. The stage came down to a sprint finish between Riis and Dufaux, which Riis narrowly lost.

Stage 20 was a 63.5-kilometer individual time-trial, where Riis was unlikely to lose his lead. He looked tired after three hard weeks of racing but did enough to maintain the yellow jersey. The real surprise was Jan Ullrich, who beat his team leader Riis by two minutes and 18 seconds and even the previous champion Indurain by 56 seconds. While the rivalry between the two teammates Ullrich and Riis would play a significant role in 1997, the 1996 Tour was decided. Miguel Indurain ended up in 11th place 14 minutes and 14 seconds behind the new champion Bjarne Riis. It took Riis 11 years as a professional cyclist to get to this achievement. Unfortunately, he would not be able to repeat a performance like that in the rest of his career.