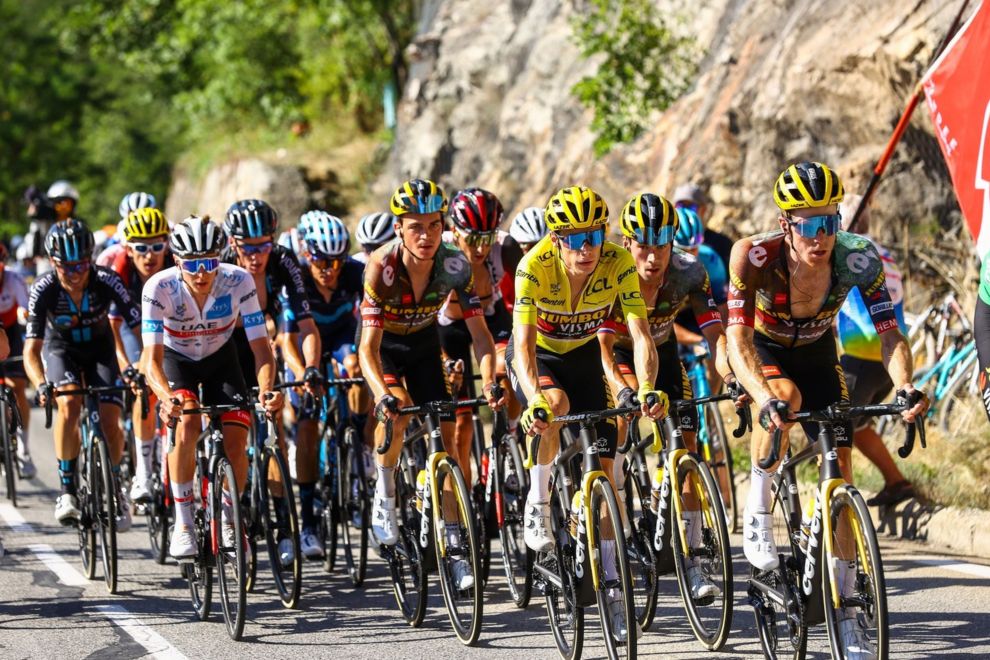 When the wind bites at the Tour de France, it can cause carnage. Sometimes, when the riders are riding into it, it can stop them in their tracks, giving the race a sedate feel. A tailwind, the opposite. But when the wind goes across the road, and the speed is just right, we get box office racing. But why does this happen and what are the Tour organisers doing to create this dynamic and dramatic racing?

First up, though, how do crosswinds make such a difference? Simply, the way the wind blows affects how the riders ride and how much power they need to produce to remain in their position. In a headwind formation, the riders at the front have to produce more power to break that wind and remain at the front. The riders behind can shelter and save energy. This is why riders will rotate in groups to give each of them rest further back in the line. For a tailwind, the drag is reduced, meaning the riders have less need for shelter and the speed will go up.

But in a crosswind, this shelter is harder to find and therefore gives opportunities for teams and riders to line the race out, preventing others from finding respite in the gutter, which, in turn, will cause splits and the potential of big time gaps. There is perhaps no better example than the 2016 Tour.

On that day, the race went to Montpellier and seemed set for a sprint. The wind was coming across the road and Fabian Cancellara took it upon himself to light it up, lining out the riders. The rouleurs were now in charge and Matej Bodnar – a teammate of Peter Sagan – found himself off the front. Sagan seized the opportunity, jumping onto the wheel of Bodnar. Chris Froome, in the leader’s jersey, also spotted the chance and was able to sprint across the gap alongside Geraint Thomas because of his good positioning.

What ensued was an enthralling final 12 kilometres of the stage caused by the crosswinds. The quartet took time and it gave Froome a bigger advantage in that year’s race, which he would go on to win.

These moments of excitement and intrigue are hard to find because the wind, rather obviously, can’t be controlled. ASO seems to be trying harder and harder each year to find those pockets of France where the wind does blow. In the 2022 edition, the stage from Dunkirk to Calais as well as those in Denmark were set up with crosswinds and echelons in mind. However, they did not materialise and the race had to use the surface rather than the conditions to make the difference. There is still the possibility of wind on stage 15 into Carcassone, which acted as the start of the abovementioned 2016 stage.

Over the past decade, more and more stages are being created with the purpose of finding the wind. But what do the riders make of it, having to ride in hectic echelons where a Tour can be won or, more importantly, lost?

“It’s one of those rare moments in a bike race,” said Millar. “A proper echelon in full flight: everybody’s in the same team, it doesn’t matter what jersey they’re in. If someone starts messing about, that’s going to compromise that ‘whole team’ effort.

“All of a sudden, status disappears too,” he adds. “It doesn’t matter if you’re the yellow jersey, the protected sprinter, you’re all in there together on this kind of horrific team time trial.”

Interestingly, you would imagine the best riders in this environment would be those shaped like Millar – great on the flats and powerful. That is right to a degree but someone who always seems to be there at the right time is Nairo Quintana.

The lightweight climber is never far from the front on crosswind days and that is in part due to his cycling brain (and some good teammates). Positioning is just as important in this type of racing and Quintana always spots the danger early. Sure, in his first Tours, he did lose time in the wind but now seems to know exactly where to be.

For riders and teams, this is tough and unpredictable racing that can make more difference than a summit finish. It can cost you a Tour de France but for the organisers and fans, it is never dull and creates compelling racing.