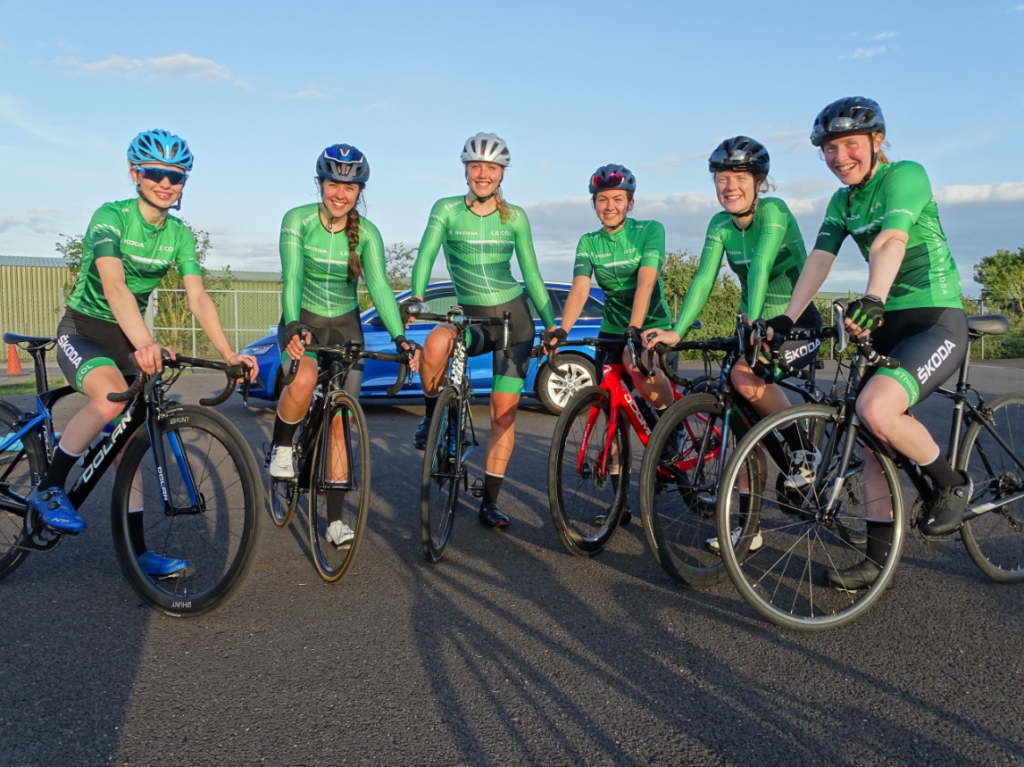 ŠKODA had chosen stage 5 for our team to watch and get to catch up with Sarah on our own personal goals and congratulate her on her unbelievable achievements in Tokyo!

We met at the start line about 2 hours before the race would start and it was so nice to see the whole team again; it was the first time we’d all been together since our first training camp in June!

After completing a few interviews we had the opportunity to line up on the start line ahead of the race and had some pictures taken as Sarah addressed the large crowd that had begun to gather to catch a glimpse of the riders rolling out.

Our plan from there was to leave before the race started and head a few km out to see them go past into a tight right hander. As ŠKODA is the Official Car Partner for the Tour of Britain, many vehicle stopped to say hello as they drove past on the route as we were stood huddles together with many other excited spectators. We didn’t have to wait long to see the race pass at very high speed! You really got a sense of how fast they were going when the following support cars went past!

From there, it was all aboard the Storey train with a quick ride to one of the ŠKODA KOMs (King of the Mountains) of the day, a short and sharp climb called Blacky Bank..

The break came over the top with roughly a 3 min advantage on the bunch. The atmosphere was electric with hundreds of people lining the streets to support the race and cheer on the riders. It was so good to see so many people getting excited by cycling and great that the Tour of Britain can bring such a big bike race right to people’s front door. We really enjoyed talking to some of the spectators about the ŠKODA DSI Cycling academy and women’s cycling before we prepared to depart for the finish.

Sarah had to dash off at this point, heading to catch a train to London for the National Television Awards, but before she did, we were lucky to be able to take a look at her gold medals from Tokyo, which was surreal. To be able to rely on Sarah as an advisor and see firsthand how much she has achieved is so motivational and all of us have definitely been given a boost watching her successes.

We were then shuttled from the KOM to the finish in Warrington where we watched the rest of the day’s action from the VIP area (whilst being treated to some much-needed food)! Hundreds more people had gathered to watch what would be a sprint finish into the town centre and with a crash on the last corner, it was definitely a dramatic one! It was great to see British rider Ethan Hayter, fresh back from Tokyo, take the stage win and the leader’s jersey. We were in awe of the amazing talent both within the race, and also the spectator areas – being lucky enough to rub shoulders with a few other Olympians, added to the overall experience and provided some serious inspiration.

Thank you to all the ŠKODA team who made it an amazing day out and we can’t wait to all be back together watching The Women’s Tour in October!