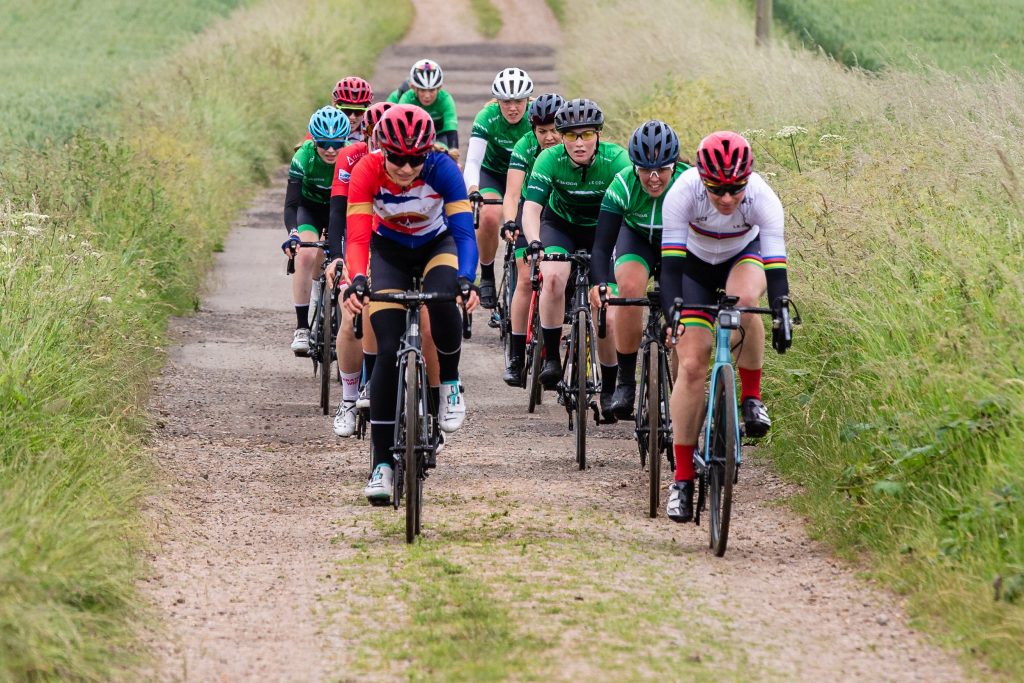 On the 22nd – 27th June 2021 the SKODA DSI Cycling Academy embarked on this year’s first trip. It was the first time the 4 new Academy riders had joined the group and met everyone for the first time. The week was action packed, full of cycling training, content production, races and team building. During the week, the Academy was accompanied by Dame Sarah Storey and Storey Racing team riders, who guided the riders with each training ride and race. There were also special guest appearances from Lizzie Banks and Juliet Elliot.

Here is a little insight into the trip from the riders themselves on their experiences from various highlights and races from the trip.

Behind the Bikeshed race Summer Circuits 12 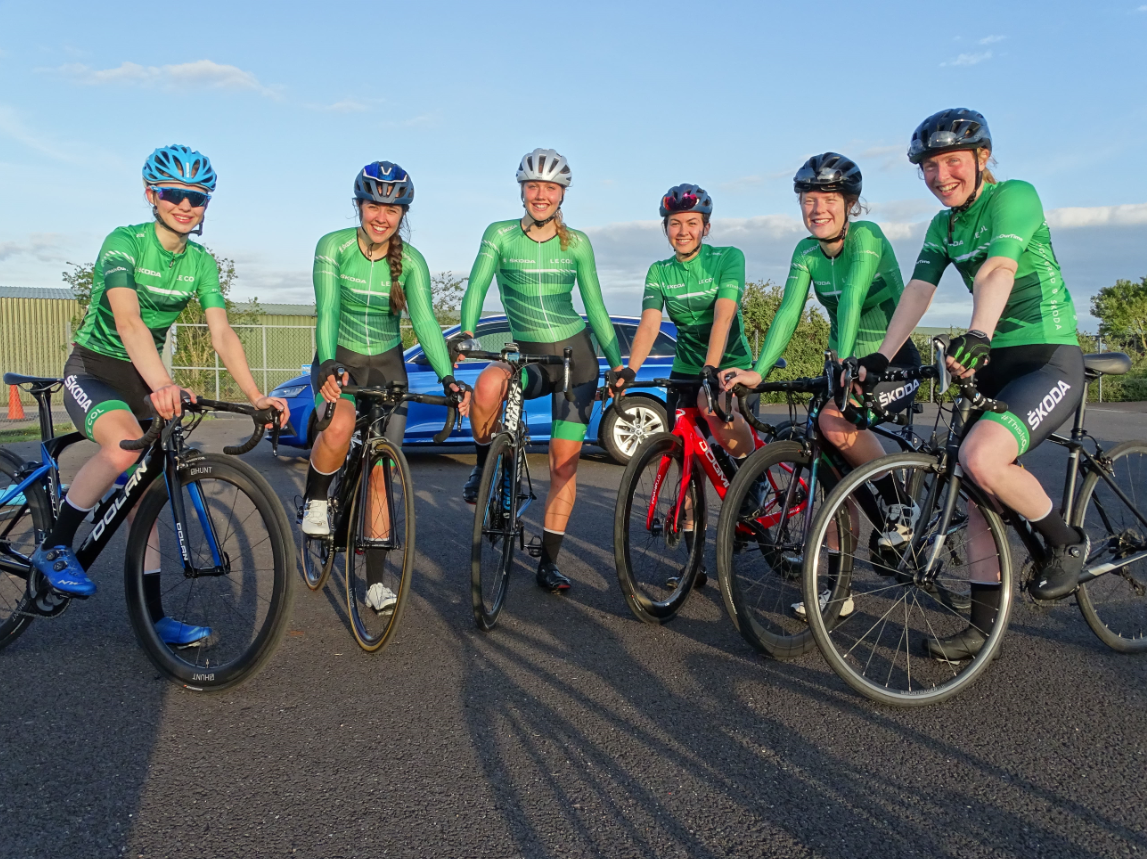 It’s been a long-awaited return to racing for many of us cyclists and Behind the bike shed produced down at Thruxton Motor circuit! They provided us with a great chance to race together as a fresh Squad! The race was split in to 3 groups E1/2, and then 3rd cat and a separate race for 4th cat men. We were put in the 3rd and 4th cat men’s races which were fast! Lots of attacks in the hour and a small group managed to get away from the main group in the 3rd Cat race which I was in, the main group was strung out trying to hold on to the breakaway however the pace was just a touch too high to hold on to them. I decided to stay around the front of the main group with two of the Storey ladies for most of the race and managed to stay in the main bunch for the full hour with the men which I was pretty stoked about! Coming into finish I came across the line in 3rd position for the women’s race and 22nd overall

The Behind The Bikeshed race on the first evening of the trip was an hour-long closed-circuit race with around 160 riders split across 3 categories. With the Storey Racing girls there too, I learned a lot that has helped me going into races since. I was a quite nervous throughout the day but chatting with all the girls helped me manage my nerves and produce a race I was really pleased with. There were lots of surges in pace where it was a struggle to hang on, but then on the uphill section into a headwind, no one wanted to work so it always seemed to slow. I had never been in a men’s race before and it was a bit scary; I made some mistakes, but I have got some strategies for next time. It gave me a lot of confidence to do other men’s races so now I have more opportunities to practice skills.

It was also good to see how others reflected on the race and listen to Sarah as she gave some tips on where we could improve. I think it was a great introduction to the academy and I can’t wait for more races as a team!

My first-time trial on a TT bike and it was so much fun! We arrived and the course lured you into a false sense of security…  there wasn’t a whisper of wind where we got warmed up! It was only until we ventured out on to the course where it became apparent there was a strong head/side wind! Apart from the wind though the course was super with two chicanes (which felt amazing on the aero bars) and plenty of straights where you could really get the legs and lungs firing together, (or screaming… however you see it) I was very happy with the time I posted with each lap getting faster and not necessarily knowing how to pace it! There were some really fast times posted by our ŠKODA DSI Academy team mates too to say that for some of them it was their first ever TT, just showing how strong they really are! Time trialling is so raw and really is a race between you and the clock! I can’t wait to do some more local TTs and start improving my times!

On Wednesday 23rd June the ŠKODA DSI Cycling Academy went to Castle Combe for a time trial as part of our end of June trip. This was my first time going to the Castle Combe circuit and I really enjoyed it, the sunny weather helped too! The circuit is wide and exposed making it very windy but the corners and chicanes aren’t too tight so you can stay on the TT extensions all the way round. The time trial was 10miles which is roughly 5.5 laps of the circuit. This meant there was lots of riders on the circuit at once but it made a really nice change not to watch out for cars or have any junctions! This TT was the first time I could try out my new Le Col Skoda skinsuit which fit perfectly and felt so aero which definitely helped me to go faster and get a better time!

Coffee and Cake ride with Juliet 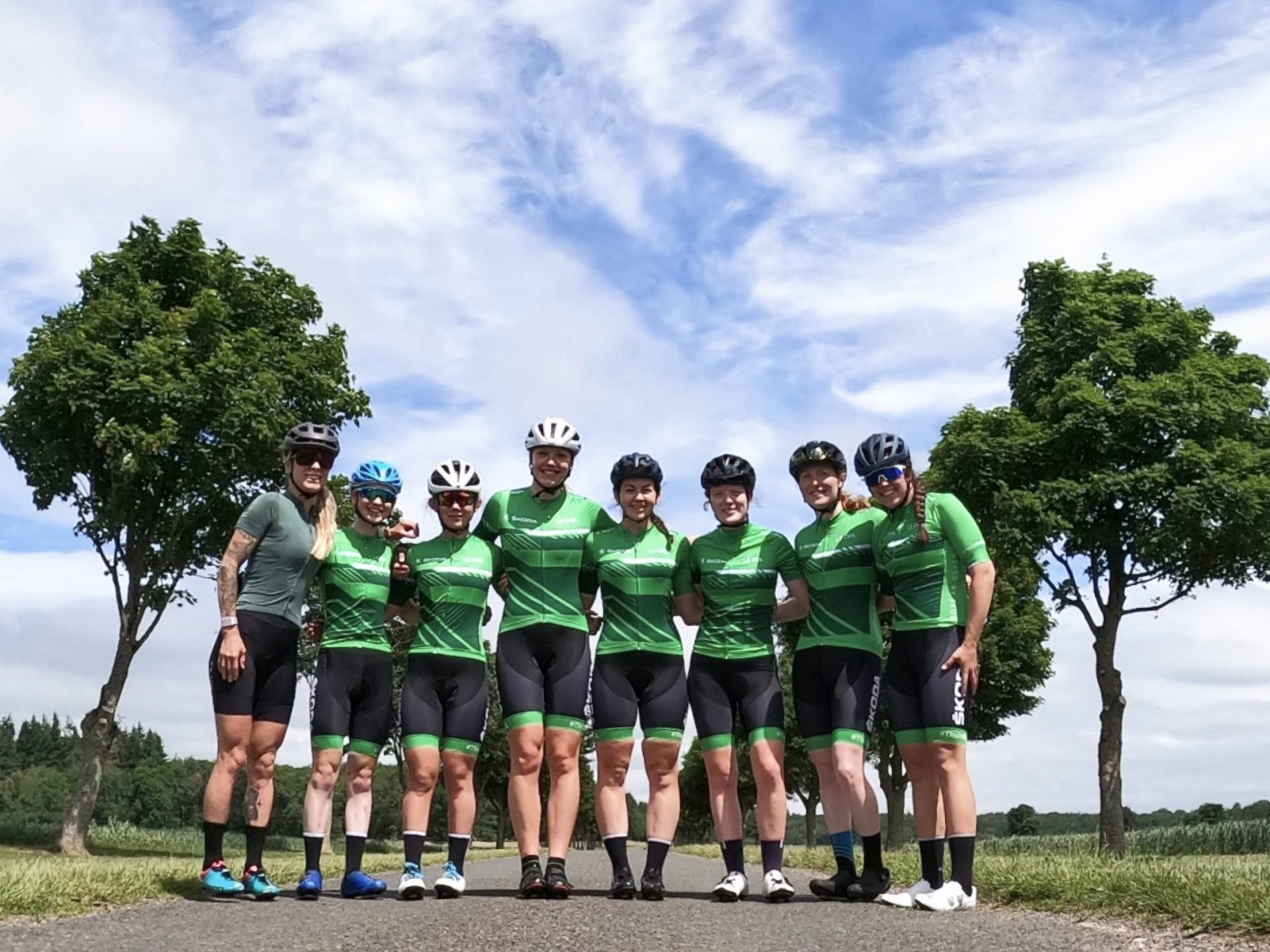 Thursday was an excellent opportunity to spend some quality time together with the other academy riders, and it was lovely to welcome Juliet along for the ride too! We were staying in Chippenham, close to where I live, so I planned a route out to a great local cafe in Tetbury via some of my favourite training roads. The ride out to the cafe was stunning, and as we rode along one of my favourite roads we couldn’t help but stop to take a few team photos, much to the bemusement of the one or two drivers going past. The cafe was very busy inside when we arrived, so we found somewhere else to sit and ordered takeaway lunch (and a few slices of cake to share – it would have been rude not to!). Over lunch we chatted away, and the new riders quizzed Juliet on cycling, life, and her role as a ŠKODA ambassador. Before long it was time to head back to the hotel, Morgan and I took the front as we raced to evade the rain which was due any minute. Arriving back, we finished the cake we hadn’t managed to eat at lunch, said our goodbyes to Juliet, and spent a good few hours being beaten by Lucy at every game we played before dinner. A 10/10 day.

On Thursday it was great to get out on a social ride with the other ŠKODA girls, and be joined by Juliet Elliot and her cameras! Led out by Meg on a route of her creation, we rode some lovely country lanes and saw loads of beautiful rural sights. The Wiltshire and Gloucestershire countryside made the perfect backdrop for some cute team photos, and Juliet’s film. Being out together in our matching team kit was a brilliant opportunity to get to know each other, doing the two things we all share a common love for; cycling, and eating cake! 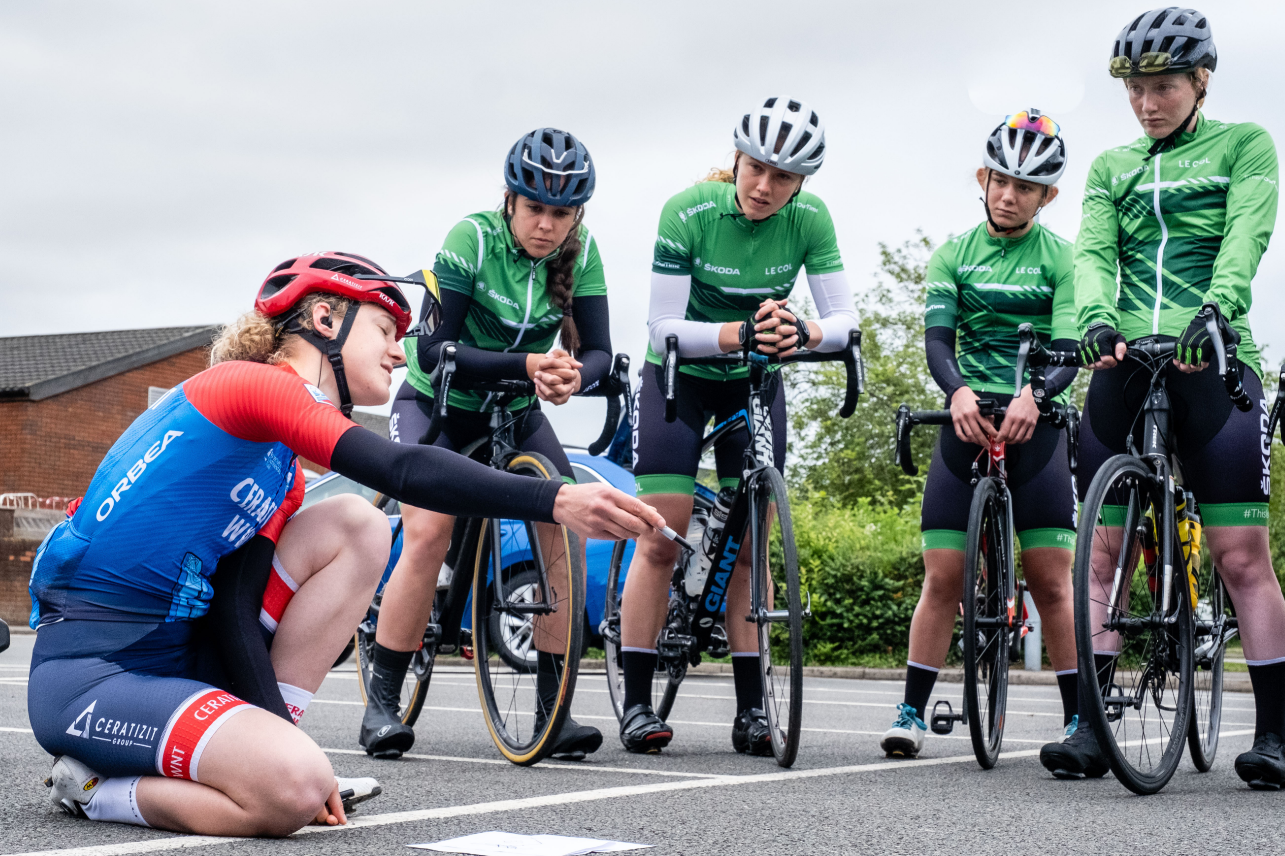 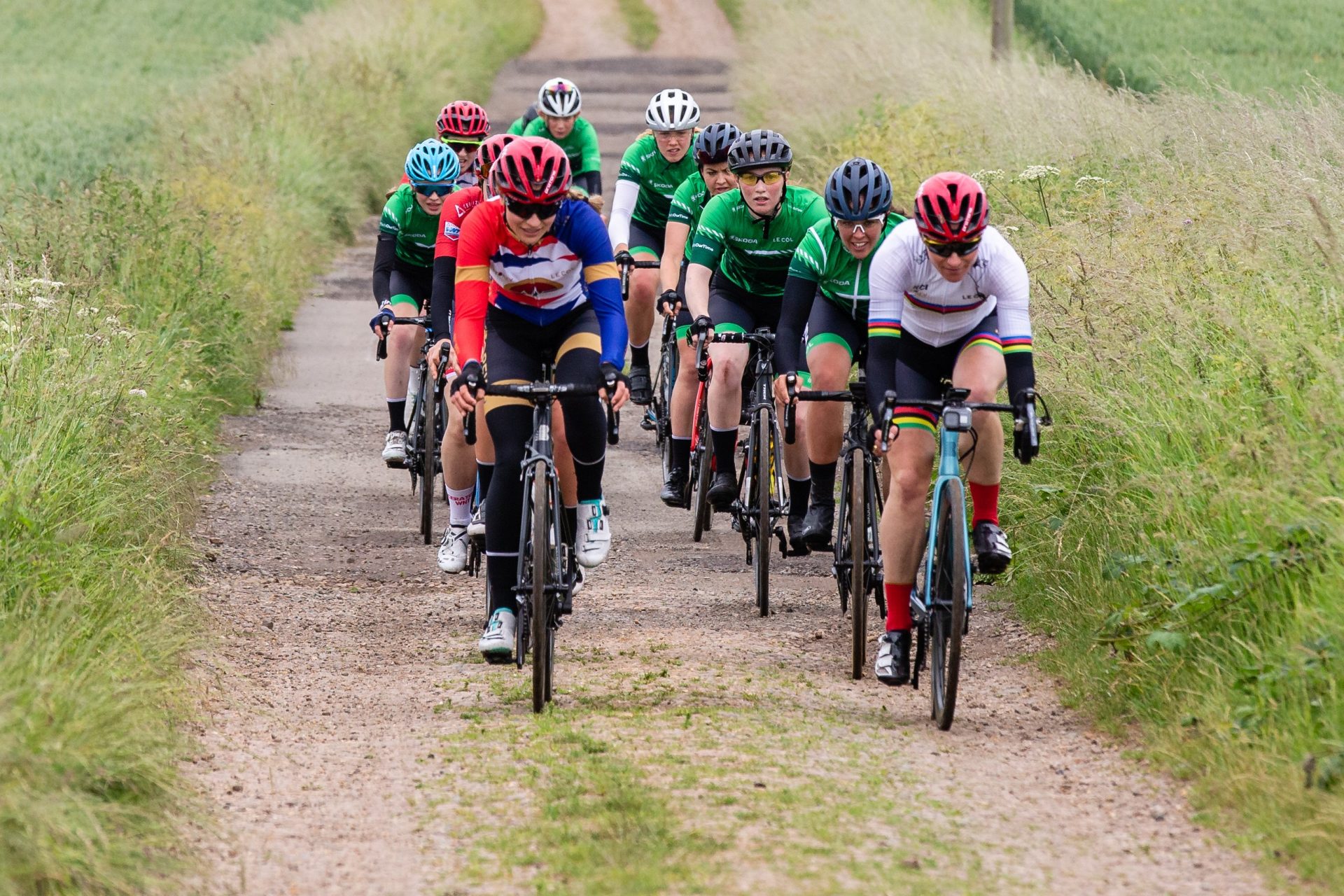 The Saturday of our trip took us to Melton Mowbray where we met Lizzy Banks for a recce of the CiCle classic road race the day before the actual race. The CiCle classic has a reputation of being a tough and unique race. It was to be my first glimpse of racing the National Series and I felt pretty apprehensive at how technical the course was going to be with the gravel sectors and rolling hills. We set off on our recce after receiving some very insightful race tips from Lizzy which stayed apparent in the mind whilst riding along with the team, upon reaching the gravel sectors I realised just how different this race was compared to anything I have done before and that it was going to be very tough. The sectors were the type of terrain that I never would intentionally ride my road bike through, following wheels through the sectors was pretty nerve wracking and I was dropped from the back of the group as I got a case of cold feet and a desire to get off my bike and walk it back to a nice, tarmacked road. After a moment of self-doubt, we had ridden most of the sectors and then we ventured back to the finish straight of the race, which involved smooth tarmac. The whole team successfully completed the recce, and it was great to have Lizzy with us teaching us the tricks of the trade.

On Saturday 26th June, ahead of 5 of the Academy riders racing the CiCLE Classic, we were lucky enough to have the amazing opportunity to recce some of the route with Lizzy Banks!

Having raced CiCLE in the past, Lizzy provided great tips and advice about the route, particularly the gravel sections which were a new experience to many of us. She also gave advice on racing in general, as well on how to not feel daunted in races, both of which I found particularly useful having started to compete in the the sport later than many.

It really was inspiring to get to ride with, and learn from, someone who is so knowledgeable about the sport and has achieved so much in it. So, a massive thank you to Lizzy for taking the time to ride with us, and answer all our questions, as I know we all really enjoyed it and learned so much that helped both in CiCLE, as well as helping us in training and competitions in the future! 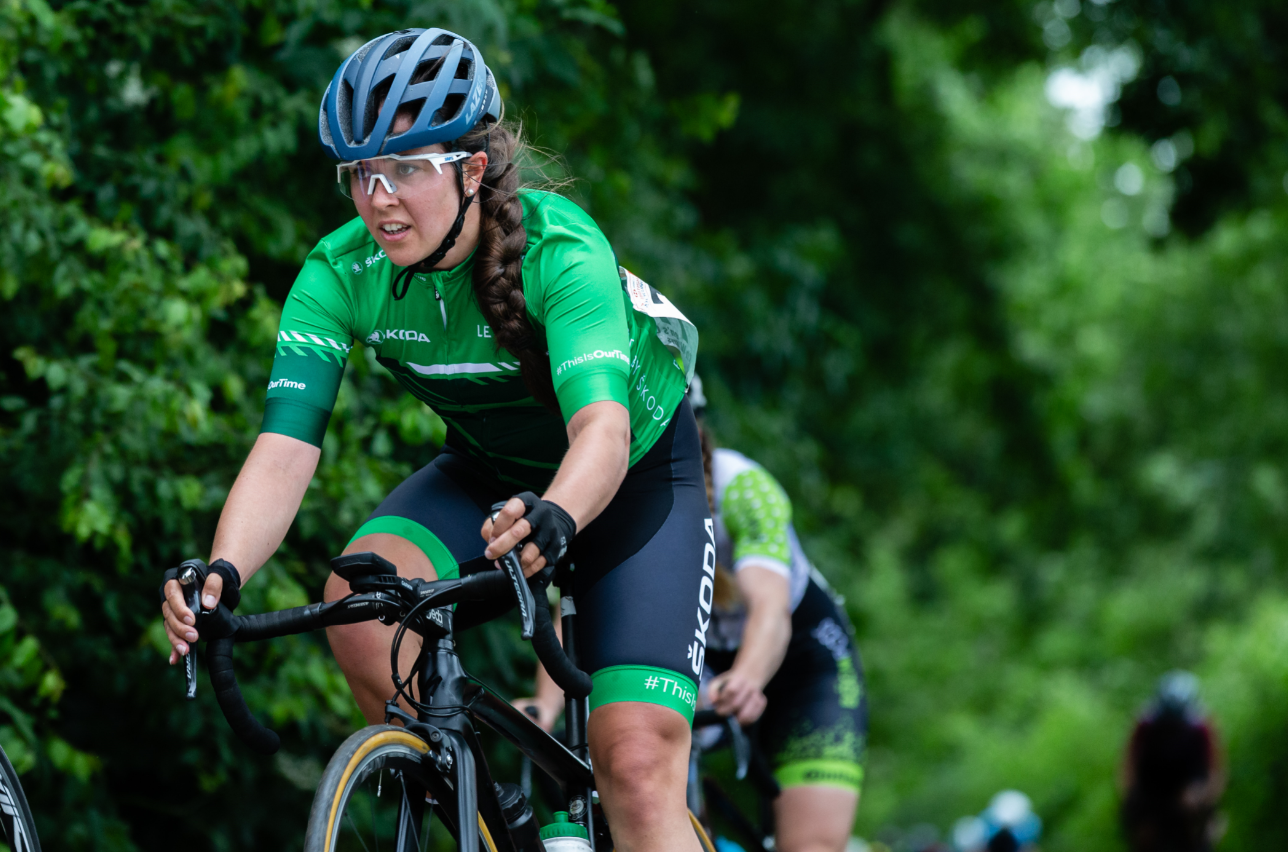 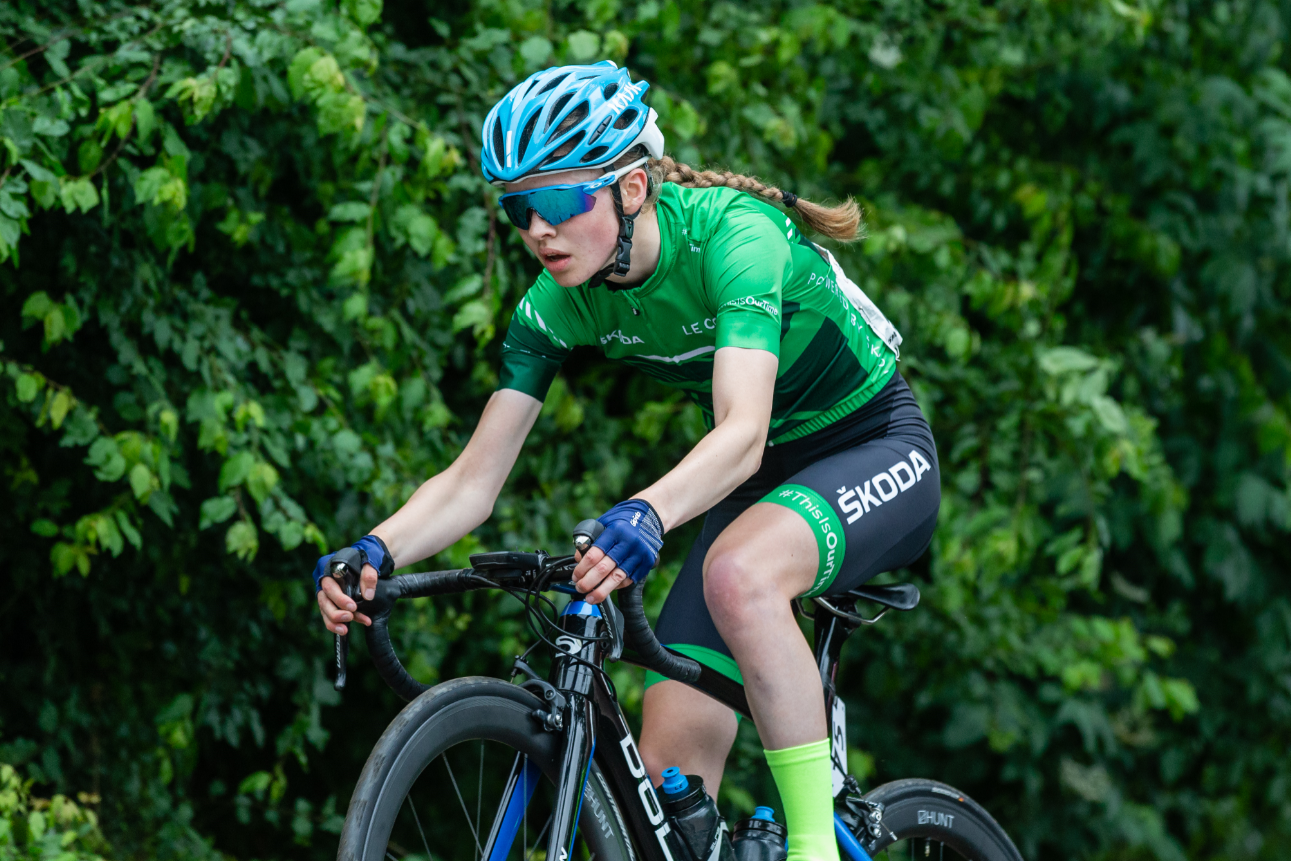 The CiCLE Classic on Sunday 27th June marked the first National A Women’s race in Britain for 666 days and was the first round of the 2021 National Women’s Road Series. Starting and finishing in Melton Mowbray, the 105km route ventures into the Leicestershire countryside with a few interesting gravel sectors thrown in there too to add to the excitement. This made for a really unusual but fun race which got split up on the various sectors where positioning was really important going into them to try and go with any breaks that formed. I was quite nervous going into this race as it was my first national as an U23 and I didn’t know what to expect with the gravel sections but, teammate Megan and I both finished in the leading group which we were really pleased about after such a brutal 3 hour race. The support from Dame Sarah and Barney Storey was really appreciated before, during and after the race as well as the course recce the day before with Lizzy Banks.

Being my second ever road race, the national CiCLE Classic event felt very much like jumping in at the deep end. With new terrain, a bigger group than I’d ever ridden in before (140!) and new bike handling skills needed, I certainly felt out of my depth at points. Knowing how important positioning was on this twisty, narrow, gravelly course, I was pleased that I managed to get near the front initially by riding a more aggressive, elbow-out position than I’m used to. But at the first substantial hill, my legs felt dead and a gap opened between me and the peleton; my race going (literally!) downhill from there. This was the first time I’ve felt my legs, rather than inexperience, have let me down in a race which, given the intense week of racing and riding leading up to it, wasn’t particularly surprising! Despite everything, it was good to experience such a high-level race and such a special atmosphere. There were positives too, including that I learnt how to pin my numbers on properly, learnt how ‘Feed’ zones operate, and managed to drink 2.5 bottles and 2 gels during the race – a personal record for me!