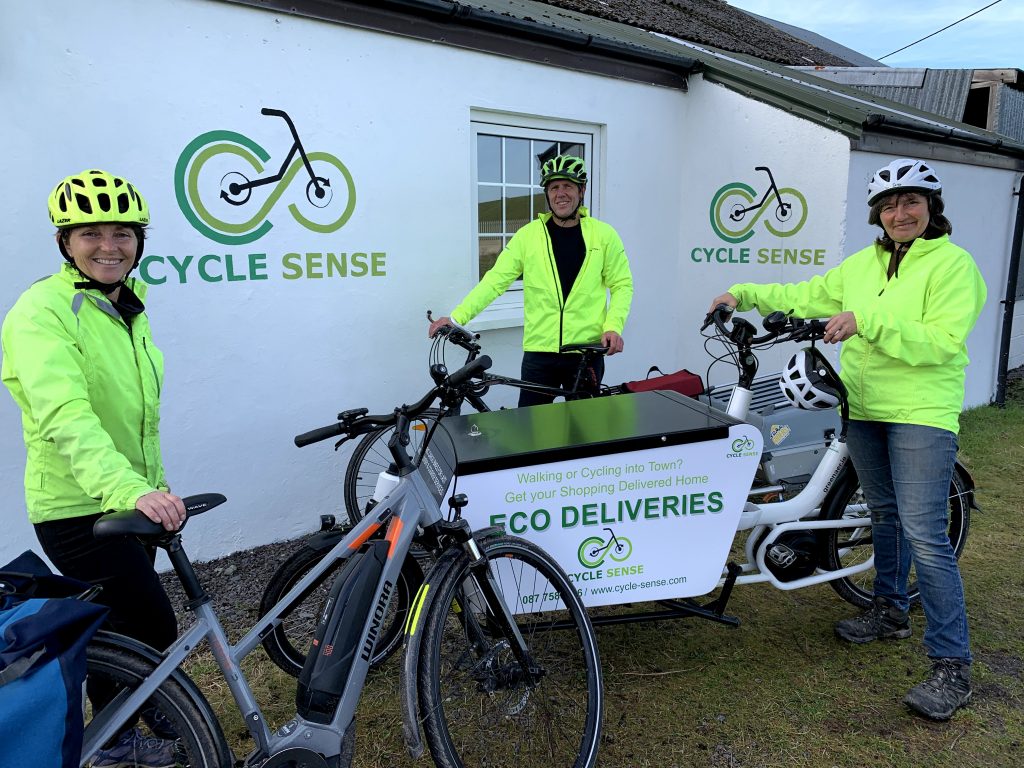 While fans of the Olympics might know Skibbereen as rowing country, that’s not the only thing going on in the West Cork town. For the past 14 years, life on two wheels has been the focus of Cycle Sense, a social enterprise founded by local pair Katie Mann and Ruth Bullough.

Since their beginnings, they’ve rolled out cycle training for primary school students throughout the region; advocated for change at a local and nationwide level; and last year opened their first premises, a workshop that serves as a base, an upcycling centre, and a whole lot more.

Ruth takes us back to 2007, when it all began: “I was friends with Katie and heard that she’d been involved in going to schools with the Gardaí running cycle training. My kids were just at that point where they were starting to venture out and spend time on the roads; I figured it would be great if they could cycle into school. My first experience of doing it was pretty frightening though; I found I didn’t know what to do with the traffic, or what to tell the kids. I reached out to Katie, wondering how we could help families in the same position.”

It was from these humble beginnings that a programme that’s seen more than 12,000 children receive cycle training grew. And while “that’s still the bread and butter” of the Cycle Sense operation – Katie and Ruth still delivering instruction, along with additional recruit Karl Watkins – it became clear that the outlook needed to stretch much further.

“I’m not discrediting what cycle training can be,” Ruth explains. “The one-to-one communication with the kids, and what they get out of it – particularly the children who sort of ‘slip through the net’ and have never learned to cycle – is a really wonderful and positive experience. But in recent years we realised we weren’t having quite the impact we might have hoped for; that it was a much broader challenge to get people out cycling.”

Central to the renewed efforts to fuel a cycling revolution in the area was the establishment of a base in the town; a workshop in Skibbereen. “We share a passion not only for bikes, but for the environment, waste reduction, social inclusion – so we looked at what else we could do. In our workshop, we’re taking bikes from civic amenity sites – it’s supported by Cork County and City Councils – and bikes that have been thrown away, and through a learning and training programme rebuilding them in order to get cheap bikes available in the community.”

Bike maintenance is another focus. “That can be a big barrier,” Ruth reveals. “For both kids and parents, not knowing how to look after your bike is a problem – so we’ve found that to be another empowering role that we can play.”

The workshop is also the site of their expanding advocacy efforts; “We’re a thorn in the sides of the engineers around us,” Ruth laughs. “But unless we develop the infrastructure to allow the safe passage of cyclists, and prioritise non-motorised traffic, it’s not going to work.”

It can be a delicate balancing act – making the best of the current situation, while passionately campaigning for significant change. But, as Ruth sees it, simple solutions are often at hand.

“When you have significant traffic, you have to dedicate space for cyclists; in rural areas, that’s not always possible . So, in an area like ours, the nature of the road and motorists’ behaviour can be changed. Change their speed, for example, introduce signage that makes it clear that the road is a shared space between cars and bikes. There’s loads of things that can be done.”

Indeed, that’s the case for Cycle Sense, too. A paint repurposing effort, REVIVE Paint, adds another string to their bow. The introduction of a cargo bike, aiming to make eco-friendly deliveries in the local area, is a further demonstration of their ambition – and, Ruth says, that’s just the tip of the iceberg.

“We’d like to get the cargo bike better placed and used more. We’ve got buildings to upgrade, and another aim is to create a track around our site where people can learn to cycle, off the road. We want to grow our fleet of bikes that are accessible for people with disabilities.”

“We’re a small town with big ideas and a big heart.”

To find out more, visit cyclesense.ie

If you’re at the beginning of your cycling journey make sure you’re equipped with these top tips.