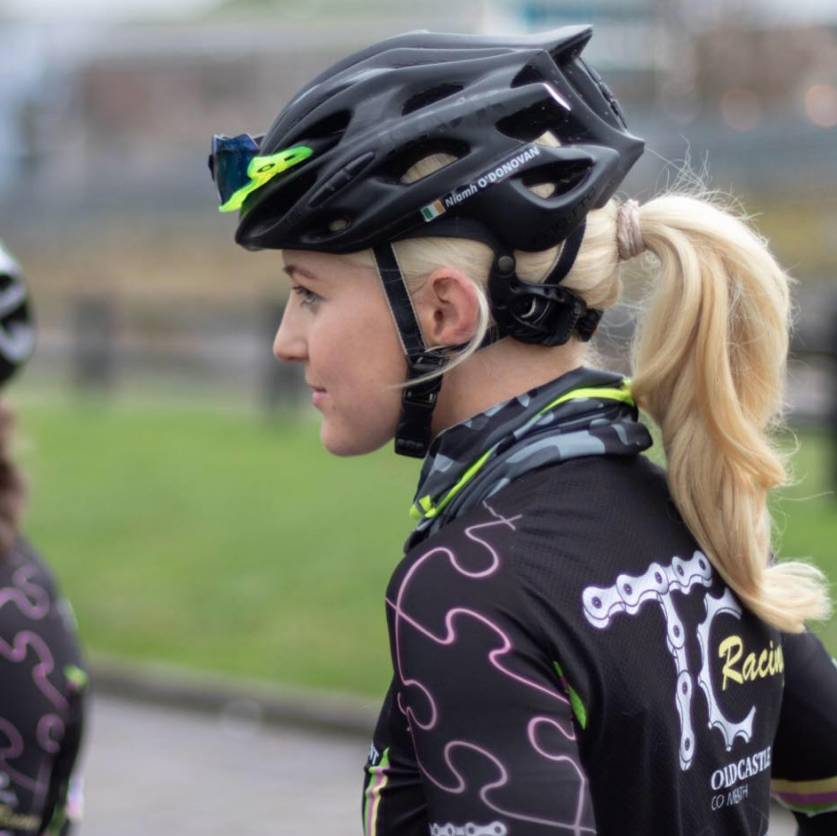 Modeligo native Niamh O’Donovan’s journey from leisurely cyclist to competitive athlete has been gradual – but she’s now near the head of the field in Ireland. Last season, she finished as the 4th in the Women’s National Series, and she’s currently in the throes of training for her very first Ironman event taking place in Cork later this summer. 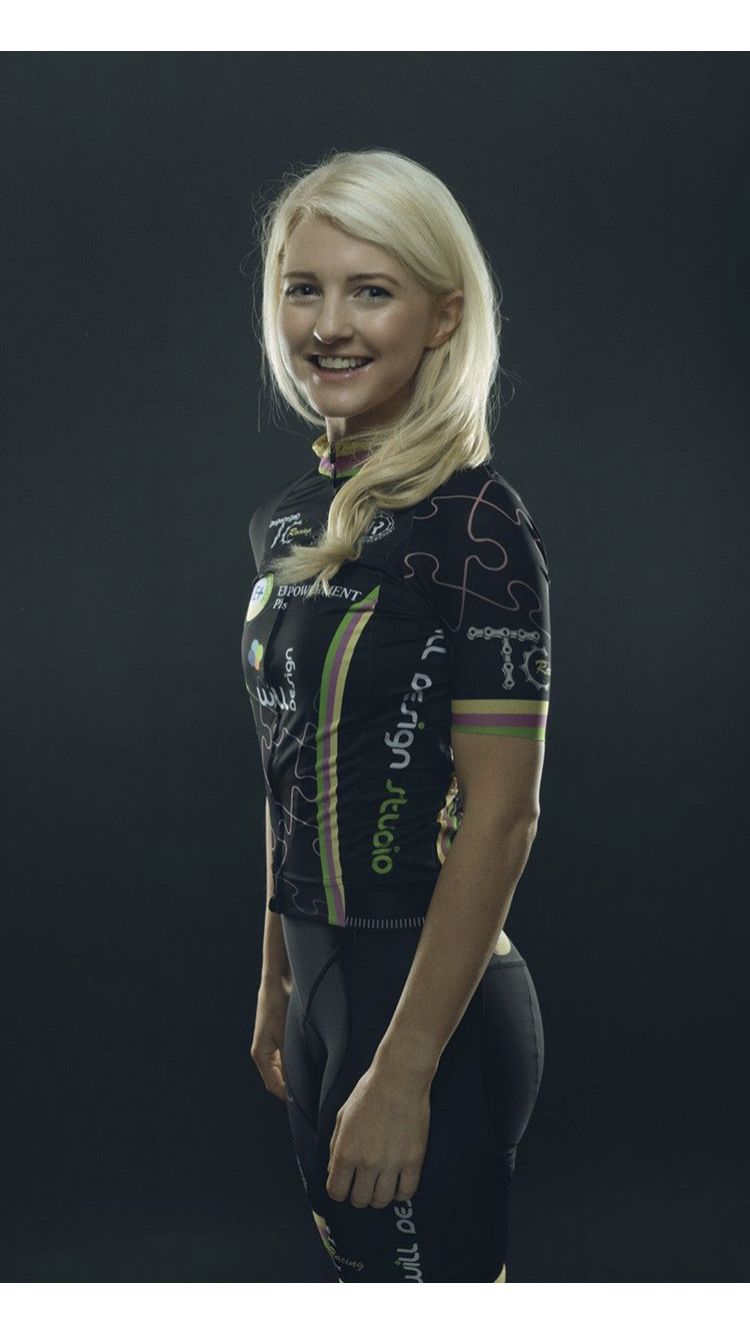 How did you first get in to cycling- what made you get “the bug” ?

I loved cycling when I was younger; I had really bad asthma and couldn’t run too far, so cycling was better. Oh, and I was a GAA diehard. But in 2013, I got my first job – and purchased my first racer bike on the Cycle to Work scheme. I then did my first sportive, the Comeragh Tour 100k. It was my first time using cleats, or cycling over 30k.

I entered the first ever Dungarvan triathlon in 2016, and did a season of triathlons before moving onto duathlons. During this time I tried to improve my bike performance – and as every triathlete knows, the best way to improve a discipline is to ‘swim with swimmers, cycle with cyclists and run with runners’! I joined the local cycling club and entered some races in 2016, just for the craic. That then led me on to joining TC Racing in 2018.

I competed with them in Rás na mBan, which was my ultimate goal for that year. I also competed in all the national league races which lead me to an overall finishing of fourth which I was very proud of. So how did I get the bug for cycling? Ask any cyclist; you don’t decide to become a cyclist one day, you just grow a love for it and there’s no going back.

Do you think cycling is increasing in popularity amongst women?

It’s a very easy sport to enjoy. It can be time consuming, but when the weather is nice in Ireland it’s probably one of the most enjoyable outdoor sports you have readily available; the discovery of new places, new roads, new scenery, and new friendships.

Weekends away with family and friends get more and more adventurous and fun with the addition of a bike. Greenways are popping up everywhere making cycling even more family orientated. Cycling is no longer about the MAMIL’s (Middle aged men in lycra)!

What do you think could be done to promote cycling for women here in Ireland? Do you see any barriers?

I think a lot of clubs are trying to encourage more women into cycling at the grassroots level – it’s thriving in my locality. The majority of women I know do whatever they feel like at the weekends with their friends. Some go on coffee spins, some take to the greenway; my mam goes off on her 20-40k spins some weeks, and she is abolsulty buzzing when she’s done!

I’m just back from a holiday in Mallorca where 15 women, of all abilities, rode just as well as the men. In Britain, racing is encouraged more; I think women need that little extra push to be encouraged to dream bigger with their goals, believe in their own abilities, and then be supported to try and achieve these by the supporting structures.

How do you change that – in Ireland, especially?

I think women on bikes setting achievable goals and challenges is what we should be encouraging. Compared with the men, there are far fewer women racing in Ireland – because racing is something that so many women on bikes would never even think of.

The introduction of the intermediate league has been very beneficial; there’s been more than 50 women signing up for some of those races.

I’m also a big supporter of club leagues. They bring on any cyclist and with a handicapped system you can have the best in the country beaten by you or me or my mam or little sister. Everyone crossed the line and everyone enjoys their time on their bike with improvements along the way.

Is professional cycling something you would ever consider?

That’s the dream – but in saying that, there’s a lot to be said for having an overall perspective and balance. If you eat, drink and live a certain thing, whether it is cycling or your job, it won’t last and burnout is real. If I was to give up everything to go pro, I’d end up hating it and give up before long.

I cycle for a release; it’s my therapy, my happy hour, and it keeps me positive. I like to be competitive, so that is why I compete – to push myself – but it’s voluntary. I love my job, but there are days I hate it; those are the days I can hop on my bike and leave it all behind in the office that day.

You’re currently training for an Ironman – how does it differ to your normal cycling training?

The training has been a brilliant part of the Ironman journey; crossing the line is what everyone wishes for, but the training’s been so beneficial to me; I feel I have overcome a lot of obstacles.

Sunday, I cycled 160k followed by a 10 mile run, Thursday I ran 22.5 miles and swam 2k in the pool, and on Sunday last I swam and cycled one lap of the course – so that’s 2k in a rough sea followed by a 90k bike. It’s not all about power or speed, it’s doing it comfortably, so you never really suffer too much. What does suffer are any other interests – hobbies, relationship, and all that!

Also, the amount of food needed is extreme. Through the winter I’d swim at 6.30am followed by a 50k cycle; this meant that by noon I was on my fourth meal of the day. I was eating chicken wraps at 8am, discovered bagels were four times better than a slice of bread, I was eating fruit loaf till it came out my ears, and I just never stopped. Nutella sandwiches are one little luxury I’ll miss when the event is over…

Tell us what your favourite route to cycle in Ireland has been to date and why?

The Ring of Beara is a beautiful sportive to do, and it’s very well run with super food stops and atmosphere. I loved the Sean Kelly 160k route as it was on the local climbs, and one of my first cycling goals back in 2016.

To be honest, any club spin or sportive can be amazing once you have your friends with you. I have cycling friends of all ages but once we get together and plan a route it is guaranteed to be brilliant fun.

For anyone that’s not from Waterford, I usually recommend they head for the coast road to Tramore, or up the Vee Pass between Tipp and Waterford.